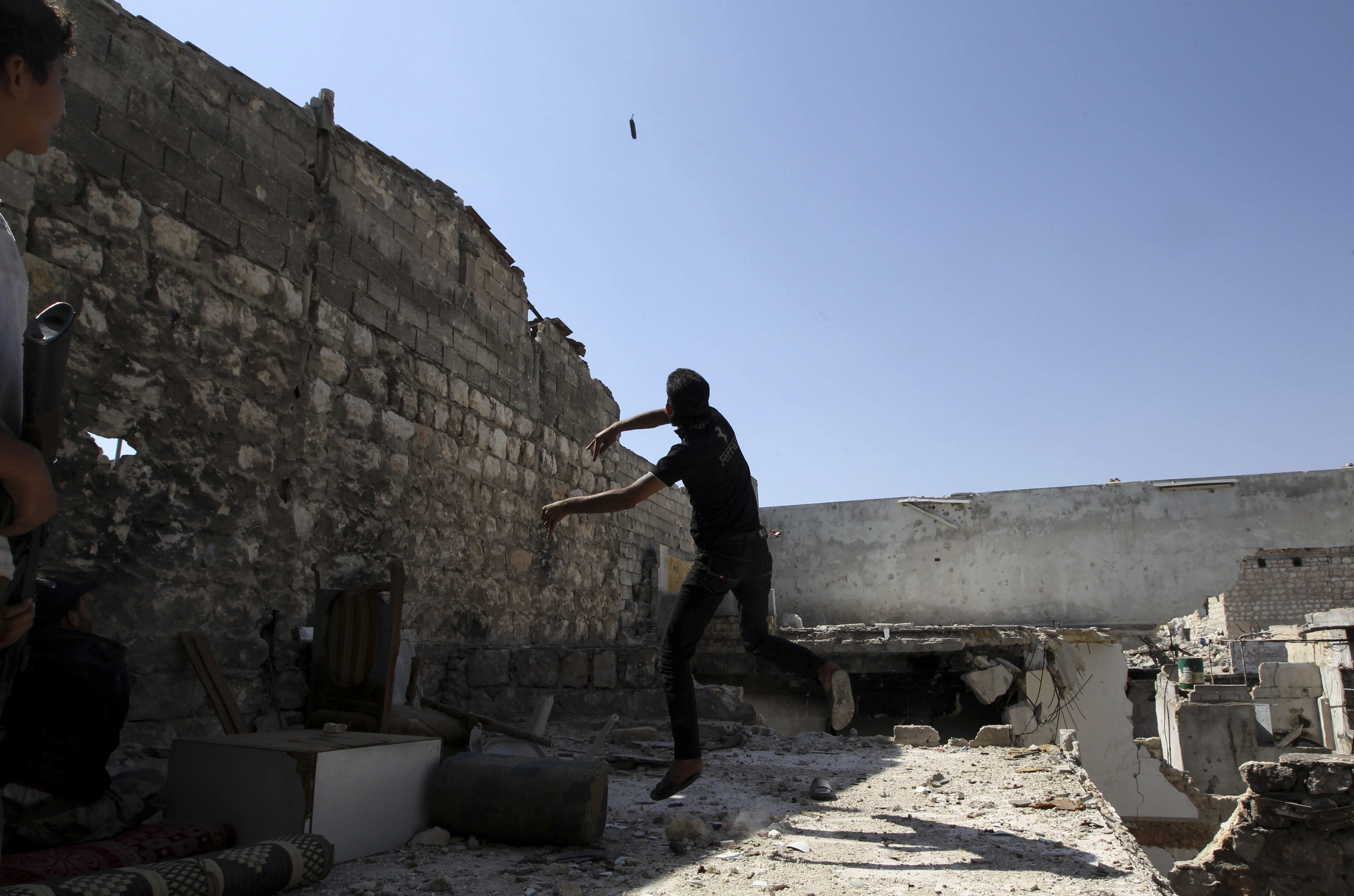 A member of a rebel group in Syria throws a handmade weapon. (Reuters/Muzaffar Salman)

By now it’s clear that the civil wars in Syria and Iraq are one. Both battles are complex, but as they have intensified over the past several years both have taken on an increasingly sectarian character, pitting rebel Sunni forces against entrenched Shiite and Alawite governments in Baghdad and Damascus. And because no compromise solution seems in sight in either case, radicals and extremists have gained the upper hand, with a network of Sunni Islamists either allied with Al Qaeda or representing Al Qaeda spinoffs, perhaps even more radical than Al Qaeda itself. Indeed, the group leading the battle in Iraq—which actually began in Iraq, first as Al Qaeda in Iraq and then as the Islamic State of Iraq and Syria (ISIS)—is more militant than the Pakistan/Afghanistan-based organization, which criticized ISIS for refusing to cooperate more smoothly with other parts of the Sunni-led opposition fighting against President Bashar al-Assad’s government in Syria.

In the United States, President Obama is being blamed by the Republicans and various hawks and neoconservatives for the crises in both Iraq—see, for instance, the editorial in The Wall Street Journal today—and Syria, though in neither case do the charges hold water. In Iraq, they say, Obama pulled American forces out too quickly, having not worked hard enough to arrange a long-term security partnership with the government of Prime Minister Nouri al-Maliki, creating a security vacuum that allowed the insurgency to regain its footing. And in Syria, they say, the Obama administration didn’t support the anti-Assad forces strongly enough, thus weakening the moderate, nationalist forces there, so that radical Islamists such as ISIS, the Al-Nusra Front and many, many others could emerge as the leading fighting force.

Neither one of these charges makes much sense. In Iraq, the White House did indeed try to extend the American presence, but Iraq’s nationalists and its independent-minded prime minister, facing a rebellious, anti-American parliament—and, of course, strongly influenced by Iran—wouldn’t allow the US role to continue under the conditions that the American armed forces demanded. And in Syria, the United States rightly stayed out of the fight, except for some weak political support for the moderate opposition, because there was no way to affect the outcome of the civil war in that country, in which Assad’s troops are making major gains, without empowering the very radical Islamist forces that the United States opposes. That’s especially true for the idea that Washington might have supplied the Syrian rebels with ground-based and shoulder-fired anti-aircraft missiles, since those arms would have likely gone straight into the hands of Al Qaeda, ISIS and others.

Still, the twin crises in Iraq and Syria are extremely dangerous. In Iraq, ISIS has taken control of most of Anbar province, including Falluja, which it has held for six months, and now it controls Mosul, Iraq’s second- or third-largest city, and its forces are driving south and east toward Salahuddin province, including its capital, Samarra, and toward the oil-rich region around Kirkuk. Already, they’ve surrounded Tikrit, Saddam Hussein’s hometown, and reportedly taken control of Iraq’s most important power-generating station at Baiji. In Baghdad, the capital, there’s nervousness, and obviously sectarian anxieties are rising there.

The lesson for the battle in Syria is that high-tech weaponry, up-armored Humvees and other battle equipment that the United States has sent to Iraq over the past several years has fallen en masse into the hands of ISIS, and the Iraqi security forces have dissolved in chaos and fled. Yesterday, in the State Department daily briefing, Jen Psaki tried to defend the Obama administration’s support for Maliki by listing the weapons that Iraq has gotten lately from the United States. She said:

I think you all are aware of the shipments that we have provided that include the delivery of 300 Hellfire missiles, millions of rounds of small arms fire, thousands of rounds of tank ammunition, helicopter-fired rockets, machine guns, grenades, flares, sniper rifles, M-16s and M-4 rifles to the Iraqi security forces. We also delivered additional Bell IA-407 helicopters late last year. Ten ScanEagle surveillance platforms are on schedule for delivery this summer. We’ve moved the Apache lease case forward and we’re now awaiting the Iraqi signature and funding for the deal.

We also recently notified Congress of an additional sale of $1 billion in arms, including up to 200 Humvees, that is now in the 30-day review period. And certainly, we remain in a discussion with the Government of Iraq about their needs during this time.

And she noted that Iraq is now starting to receive US-supplied F-16s. ISIS, which probably won’t manage to seize any F-16s, is grateful for the rest.

It’s safe to say that Iran, which is already the strongest backer of Assad in Syria—along with Hezbollah, the Iranian-backed, Shiite militia from Lebanon—won’t look too kindly on the Sunni offensive in Iraq. Therefore, it seems very likely that Iran will enter the fray in Iraq more intensively, with political and military support for Maliki, and that Iran will support Iraq’s majority Shiite population, and probably the Kurds too, in a Shiite-Kurdish assault to retake Mosul. That, in turn, is guaranteed to make the civil war in Iraq look more like the one in Syria, with massive government attacks on civilian strongholds controlled by ISIS, and ever greater resistance against the government and its Iranian allies by Sunni civilians already predisposed to oppose Maliki. So, greater polarization, vastly greater casualties (à la Syria), and more intense sectarianism. (Already, Maliki is reportedly using dog-whistle, Shiite religious-war rhetoric in calling Iraqis to arms.)

If there’s any solution at all, it’s in the hope that quite without American interference Iran and Saudi Arabia will find common purpose in fighting back against Al Qaeda, ISIS and their allies. Recently, the government of President Hassan Rouhani of Iran has sought better relations with Saudi Arabia, and Iran’s foreign minister has been invited to Saudi Arabia. At the same time, Rouhani has been visiting Turkey, where he signed important accords, and since Saudi Arabia and Turkey are the two most important Sunni-led powers in the region, it could be that Iran and Saudi Arabia can work out an arrangement to stabilize the crisis. It’s a long shot, but it could work. Above all, it would require Maliki to seek a political reconciliation with the non-ISIS-supporting Sunnis, including the remnants of the anti–Al Qaeda Awakening movement of Iraq (2006–08). And it would require Assad, who’s just been re-elected to another term as president, to support a political deal that could eventually create space for another set of elections in which moderate opposition, Sunni-led parties might run.

None of this has stopped some in the United States from calling for war. Ken Pollack, the Brookings Institution scholar who supported the war against Iraq in 2003, says:

And Robert Ford, the former US ambassador to Syria who so badly bungled his job back when the civil war was just starting in 2011–12, is speaking out to demand that the White House get more deeply involved in Syria’s war, too, by arming the rebels. (Last week, Ford wrote an op-ed for The New York Times whose title was “Arm Syria’s Opposition.”)

Recently, Obama delivered a major speech in which he criticized the too-easy reach for a military solution, and here’s to hoping that he sticks to that path. But even if the United States doesn’t become directly engaged in the Syria-Iraq civil war, the sentiments expressed by Pollack and Ford are widespread in the State Department and elsewhere in the administration. And Obama himself did seem to fall back, in his speech, on using proxies to fight “terrorism” overseas. To be sure, Al Qaeda and ISIS are terrorists. But fighting them, especially long distance, seems guaranteed to strengthen, not weaken them. Ironically, America’s best ally in the Syria-Iraq civil war is an unlikely one: Iran.