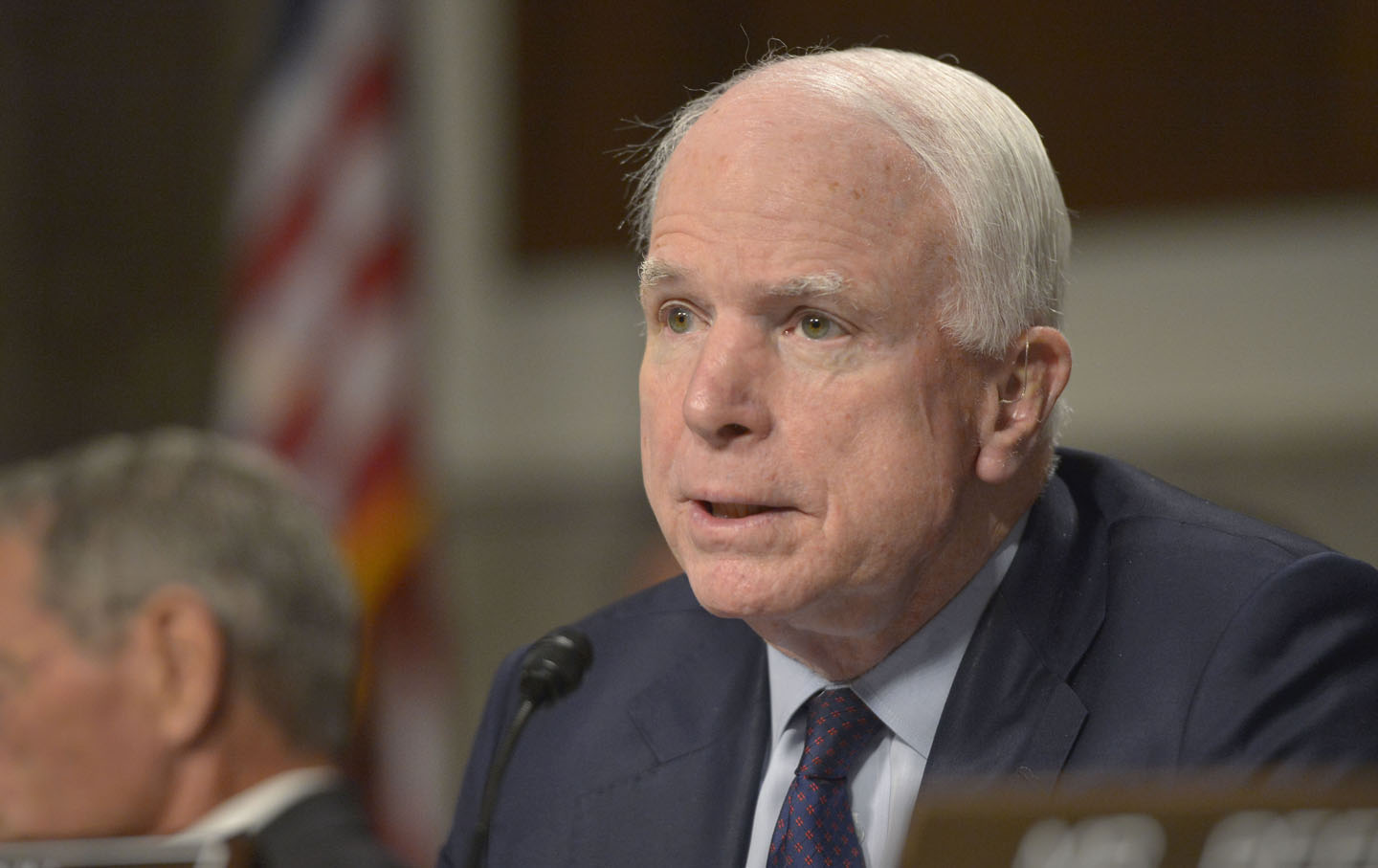 Opponents of the Iran deal, which was worked out between Iran and the UN Security Council plus Germany, with EU support, keep reciting the mantra of “a better deal” through “harsher sanctions.” Even last winter, Wisconsin governor and Republican presidential candidate Scott Walker said, “I think imposing additional sanctions is the only way to bring Iran to the negotiating table in good faith.” But these ideas are of course unicorns, suitable for a fairytale hour on Fox News Channel but having no basis in reality.

In the first place, the United States overestimated its ability to sanction Iran and, even at the height of the sanctions, could not stop it from exporting a million barrels a day, to countries such as China, which told the Treasury Department to jump in a lake. Beijing will be even more defiant if there is a congressional demand for yet another round of severe sanctions. Admittedly, Iranian oil exports were down from 2.5 million barrels per day in 2011, and the sanctions hurt, but they weren’t crippling and may have even had some benefits. A weaker Iranian currency caused non-oil exports to jump, providing jobs and income to farmers and owners of workshops and factories.

Another failure was political: the sanctions imposed on Iran by the United States and its allies from 2012 until today were the harshest applied to any country in modern history, and they still could not convince Iran’s leaders to give up their right to enrich uranium for civilian purposes (a right guaranteed to all countries by the Nuclear Non-Proliferation Treaty, to which Iran is a signatory).

Beyond these failures, even some of the initial successes scored by the architects of the sanctions are fading and cannot be repeated, because they alarmed the BRICS nations (Brazil, Russia, India, China, and South Africa), which are developing counter-measures. Since harsher sanctions would depend on good will from the rest of the world, which does not exist, there is no prospect of punishing Iran more severely than during the past three years.

Politicians often speak of sanctions in a vague and abstract way, but if we look at the details of how they have worked, it gradually becomes clear that most of them are already being blunted. For instance, the United States has enormous influence over the Asian Development Bank, based in Manila in the Philippines. Iran, Pakistan, and India were eager to construct a natural gas pipeline, bringing fuel for desperately needed electricity from Iran’s rich gas fields to the teeming cities of South Asia. The project foundered when the ADB, which is in the back pocket of Washington, declined to make the infrastructure loans required.

Instead, the ADB is backing a rival project to bring gas from Turkmenistan down through Afghanistan to South Asia. The idea of piping such flammable material through Afghanistan, however, seems daft. The pipeline will almost certainly be regularly blown up by the Taliban, and the weak government in Afghanistan (unlike the much stronger states of Iran and Pakistan) will be unlikely to be able to stop them.

Pakistan’s own government never bowed to US demands to give up the Iran pipeline, though they could not pursue it for lack of infrastructural loans. Now, some Pakistani cabinet ministers are saying that an Iran pipeline will be “fast-tracked.” If it is not, it won’t be because of US pressure.

Even the Asian Development Bank has just had its ability to veto such projects taken away from it. China has inaugurated a rival institution, the Asia Infrastructure Investment Bank, and invited Iran to be a founding member. Washington attempted to shoot this plan down by rallying its friends against it, but failed miserably. Even close allies such as Britain, France, Germany, and Australia joined (Canberra positively threw itself into China’s arms, becoming the sixth-largest shareholder). The fact is that if the AIIB wants to fund pipeline projects between Iran and its neighbors, the United States is now entirely helpless to prevent it.

India has also chafed at Washington’s restrictions on trade with Iran, which were carried out mafia-style through threatening third-party sanctions. That is, Indian governmental and private firms that traded with Iran risked being blackballed from trading with the much more lucrative American market. But India and other Asian governments view Iran’s natural gas, which typically puts out half the carbon dioxide of coal, as a key bridge to a clean-energy future, and Asian governments are not in any doubt about the realities or dangers of climate change. Their patience with American strong-arm tactics is at an end.

White House spokesman Josh Earnest recently admitted that India suffered economically for its (sometimes lukewarm and partial) participation in the Iran sanctions, and that “there’s no basis, there’s no credible claim for why they would be willing” to enforce US sanctions if Congress sinks the deal. Cleaner electricity for its constituents will henceforward outweigh for the government of Indian Prime Minister Narendra Modi the importance of keeping the wildmen on Capitol Hill and at the US Treasury Department happy.

Some new technological innovations may also help Iran. Indian engineers are looking closely at the possibility of an ultra-deep-water gas pipeline from that country, which would allow New Delhi to escape the dependence on Pakistan that would result from an overland pipeline and would sideline the threat of terrorist bombings. A purely bilateral such project would be extremely difficult for the next US president to halt.

One tactic the US Treasury Department deployed against Iran was to have 30 of its institutions delisted from the international SWIFT bank exchange. It suddenly became very difficult for Iran to receive payment for its petroleum, and it was often reduced to convincing partners to use soft currencies or even resorting to barter. China and Russia, however, saw what the United States was able to accomplish. When Washington led an effort to sanction Russia itself over the Ukraine issue, Moscow began exploring the establishment of a new bank exchange outside SWIFT, just in case Washington ever attempted to pull an Iran on Russia. China, also alarmed, appears set to go ahead with its own alternative to SWIFT, although the project is not now as ambitious as it was at conception.

Part of the problem for the United States is that the nominal gross domestic product of the BRICS nations together approaches $17 trillion this year, about equal to that of America itself. They have all been extremely uncomfortable with US sanctions on Iran, and some of them fear similar treatment should they have a falling out with Washington. They are developing alternative international institutions to those controlled by the United States, and are inviting Iran into them.

Iran itself has also found ways around the severe US sanctions. Initially, the antipathy of Washington made it difficult for that country to find tankers to deliver its oil to China because maritime insurance dried up. Iran then just built or bought its own fleet of 40 super-tankers and insured them itself. The expertise it gained even allowed it to build four super-tankers for Venezuela for over a quarter of a billion dollars. It took time for Iran to respond to the US ability to deprive it of international shipping, but it is now independent of such considerations, so that trick won’t work for Washington again.

In essence, US hegemony over certain key international institutions such as petroleum markets and the SWIFT exchange allowed it to subject Iran to an unprecedented sanctions regime since about 2012, harsher even than what went before. This set of tactics, however, was essentially single-use. In the service of pressuring Iran, the United States shot its wad. The BRICS are swinging into action to create alternatives. Iran and its trading partners have often found work-arounds. American strategists might well question whether it was worthwhile to squander US dominance in world financial institutions on the third-rate issue of Iran, instead of saving those tools for genuine threats to US security. In any case, all the talk by hawks on the Hill or the mob of candidates running for president on the Republican ticket that unilateral US sanctions can cow the Iranian leadership, or even that there are many arrows left in the depleted Treasury Department quiver, is mere hot air.