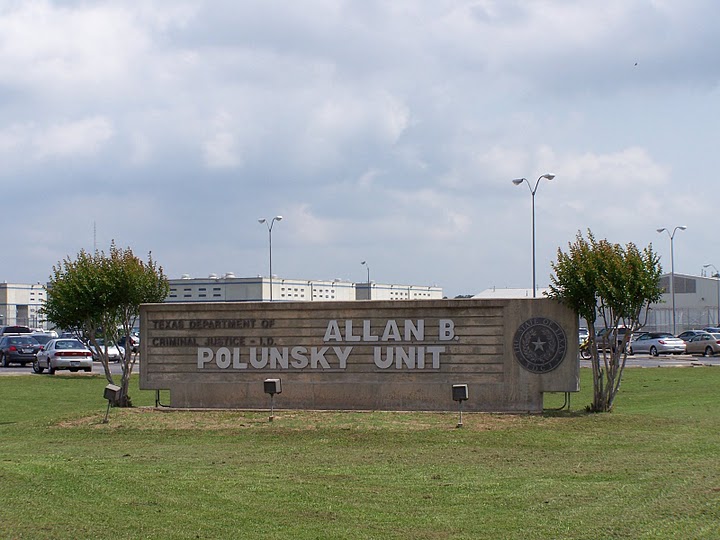 The Allan B. Polunsky Unit in Livingston, Texas (Courtesy of the Texas Department of Criminal Justice)

The worst part of Dave’s job as a death-row guard happened early morning on the day of an execution. After taking the inmate for his final shower and instructing him to change his clothes for his last visit with his family, Dave would bring him back to his cell. Officers would then escort him in handcuffs to a prison van, which would take him from the Polunsky Unit in the east Texas town of Livingston to the death chamber at another prison in Huntsville, forty miles away.

“They have that look—like they know what’s coming,” Dave (not his real name) says. “Man, it’s hard to look at them in the eyes.”

If you live in Livingston, a town of little more than 5,000 an hour north of Houston, you’re either employed in the timber industry or by the prison. Dave was a truck driver for thirteen years, but when his employer shut down because of the flagging economy after 9/11, he trained as a corrections officer. There’s more money in logging, he says, but corrections provides steadier employment. “Prisons are recession proof,” he says.

But serving as a cog in a machine whose ultimate aim is to destroy human life takes a toll. After eight-and-a-half years working on death row, Dave started having nightmares. He suffered from high blood pressure. “Even the younger guys get high blood pressure working there,” he says. “There were times I’d get to the entrance [of the prison], go through screening and do an about-turn, go back into the parking lot and call in sick.” So Dave transferred from death row.

Prison-reform groups tend to focus on the plight of inmates—their conditions under incarceration, getting them access to legal counsel. One is not naturally inclined to feel sympathy for the enforcers in this draconian system. But working in a crushing environment where violence is the norm, guards are victims as much as victimizers.

“Prison functions in entirely the opposite way from the small, healthy family or community,” says Frank Ochberg, a psychiatrist who sat on the panel that went on to define post-traumatic stress disorder (PTSD) in the 1970s and who has served as an expert witness for countless inmates on death row. “It does to a human being what a zoo does to a wild animal.”

More than 25 percent of prison guards suffer from PTSD compared with 3.5 percent of the general population, according to a study by the Desert Waters correctional outreach center in Colorado. Corrections officers commit suicide at more than double the normal rate. They are collateral damage in a system that embodies one of the most devastating uses of state power.

Dave recounts the harrowing story of a fellow officer on death row who five years ago was working a night shift at the Polunsky Unit. During his break, he walked out into the parking lot, climbed into his car, pulled a gun out and killed himself. “He went undiscovered for an hour even though he was in the front row [of the parking lot] at the end spot practically at the entrance to the gate house,” Dave says.

The Texas Department of Criminal Justice will only confirm that on December 4, 2008, “a correctional officer assigned to the Polunsky Unit was found deceased inside a private vehicle from a self-inflicted gunshot wound.”

Set on 472 acres surrounded by forests and fields, Livingston’s Polunsky Unit is one of 111 state prisons overseen by the Texas Department of Criminal Justice. It is a bleak, foreboding complex connected by walkways and encircled by two perimeter fences of razor wire with guard towers. The buildings that house Texas’s male death-row inmates (women are housed at a prison in Gatesville) are set off from the others: three concrete rectangles with white roofs, each with a circular recreation area at the center. In total, the prison houses 2,936 inmates, 279 on death row, and employs 691 people.

Since 1976, when executions resumed in the United States after a moratorium, Texas has executed the lion’s share of the condemned: 515 people, compared to Oklahoma, which is next with 111. In total, 1,382 people have been executed in the US since 1976.

Like the inmates themselves, prison guards spend their days in a windowless concrete bunker. “There’s no field of vision,” Dave says. “All you’re looking at is concrete walls and steel bars all day long.”

For officers on the day shift, work begins at 5:30 am and lasts until the night shift takes over at 6 pm. In the death-row wing, three officers are assigned to each of six pods. One mans the “picket,” which operates the doors and controls communications. The two others serve as “rovers” on the floor, responsible for ensuring each inmate showers (if he wants to), takes an hour of recreation and is served food in his cell.

“It doesn’t sound like much,” Dave says, “until you consider you have to go to each cell to do each one of those things, and you have time limits. Each inmate has recreation separately, and if you’re going to take an inmate out of his cell, you need two guards there.”

Strip-searching inmates to look for weapons has always been common practice for high-risk inmates. So-called “shanks” can be forged from almost anything—plastic food containers, metal pulled off the bunks or walls, even papier-mâché. Before each inmate can exit his cell, he must strip and change clothes, then be handcuffed through the slot in his door. “That tires you out, too,” Dave says, “looking at these naked guys all day long—one naked inmate after another.… I’m sure it’s dehumanizing for them too.”

As with the inmates themselves, officers are under constant threat of violence. In 2013, only three incidents involving exposure to bodily fluids by death-row inmates were reported to the TDCJ’s Emergency Action Center, the division that gathers information regarding potential risks to the agency. In 2012 there were ten. But inmates throw sour milk and other liquid at staff on an almost weekly basis. Dave says this happened to him many times.

Luckily, serious staff assaults resulting in injuries that require treatment beyond first aid are few and far between. In 2013 and 2012, there were just two involving a death-row inmate. In 2011 and 2010, there were three each year.

Inmates often set fires using paper and other flammable items—even ground-up Tylenol. After setting the items on fire, they typically throw them at officers. Inmates have even been able to start fires by sticking pencil led or razor blades in sockets.

“I spent my first four years on the night shift,” Dave adds. “And I can’t remember how many times I [had to extinguish] fires on E or F pod. One thing they can do—it’s amazing—they’re all locked in their cells and they have nothing but the screen mesh on the door and they can set a fire right in front of their cell.”

Using the same method, they also make what are known in prison as “stingers”—homemade devices to heat water that they can then use to make coffee or as a weapon. Dave explains: “They have hot pots in their cells, but they’re preset to heat water to a certain temperature. It won’t boil. It’s lukewarm. But with stingers they can get liquid boiling hot.”

According to the Death Penalty Information Center, inmates in the United States typically spend more than a decade awaiting execution. And despite the fact that some are violent to the men and women who guard them, and others just a pain, it is typically not relief corrections officers feel on the condemned man’s last day.

Lee Taylor was no saint. In the eleven years he was on death row in Texas, the 245-pound murderer nicknamed “Tiny” caused constant problems for his guards at Polunsky, always angling for a fight. Even the other inmates thought he was a “knucklehead.”

On the morning of his execution, June 16, 2011, Taylor was in his cell on F-pod, known as “death watch.” A female officer who had known him for several years—and been on the receiving end of some of his troublesome behavior—arrived at his cell door to take his fingerprints. In one of the more bizarre rituals of the death-penalty process, inmates about to be escorted to the death chamber are fingerprinted to ensure the state executes the right person. After Taylor was taken from his cell to the waiting prison van, that officer broke down in tears.

As Dave says, “You get to know them. You wouldn’t call them friends, but you understand them a bit. You get that human contact. So when you’re getting them ready for that last day and they have that lost look in their eyes, you can’t help feeling a little for them.”

While the physical repercussions of working in prison have been studied, only recently have academics begun to study the mental stress of prison life on guards. Caterina Spinaris, a psychologist who runs the Desert Waters correctional outreach center in Colorado, is one of the emerging scholars who studies “corrections fatigue.” A couple of years ago, she published a study on PTSD and depression among US corrections workers. She estimated that 26 percent of corrections staff suffer from depression—more than three times the rate for full-time adult workers in the general population. Among the emotions corrections officers most frequently report experiencing are shame and guilt.

Spinaris attributes the elevated rate of PTSD and depression to a variety of stressors, including “witnessing offender-on-offender violence in real time, discovering bodies of offenders who committed suicide, or being physically assaulted, or threatened with physical or sexual violence.”

After twenty or thirty years working on death row, Lance Lowry, president of the Huntsville American Federation of State County Municipal Employees, the largest corrections officers’ union in Texas, says the constant battle “messes” with corrections officers. “You can definitely see them age after working in there,” he says. “Day after day, bombarded with high noise levels, high stress, not knowing if you walk through that gate whether it’ll be your last time.”

Lowry says facilities like Polunsky are so large that, like the inmates themselves, corrections officers are reduced to “just a number.” He says that although no studies have been conducted on depression and PTSD among Texas prison officers specifically, anecdotally there is a high level of depression among his members.

Although he could never work on the death row wing at Polunsky again, Dave insists it was just a “rough job.” “Did I ever see a doctor? No,” he says. “But I couldn’t wait to get away from the place.”