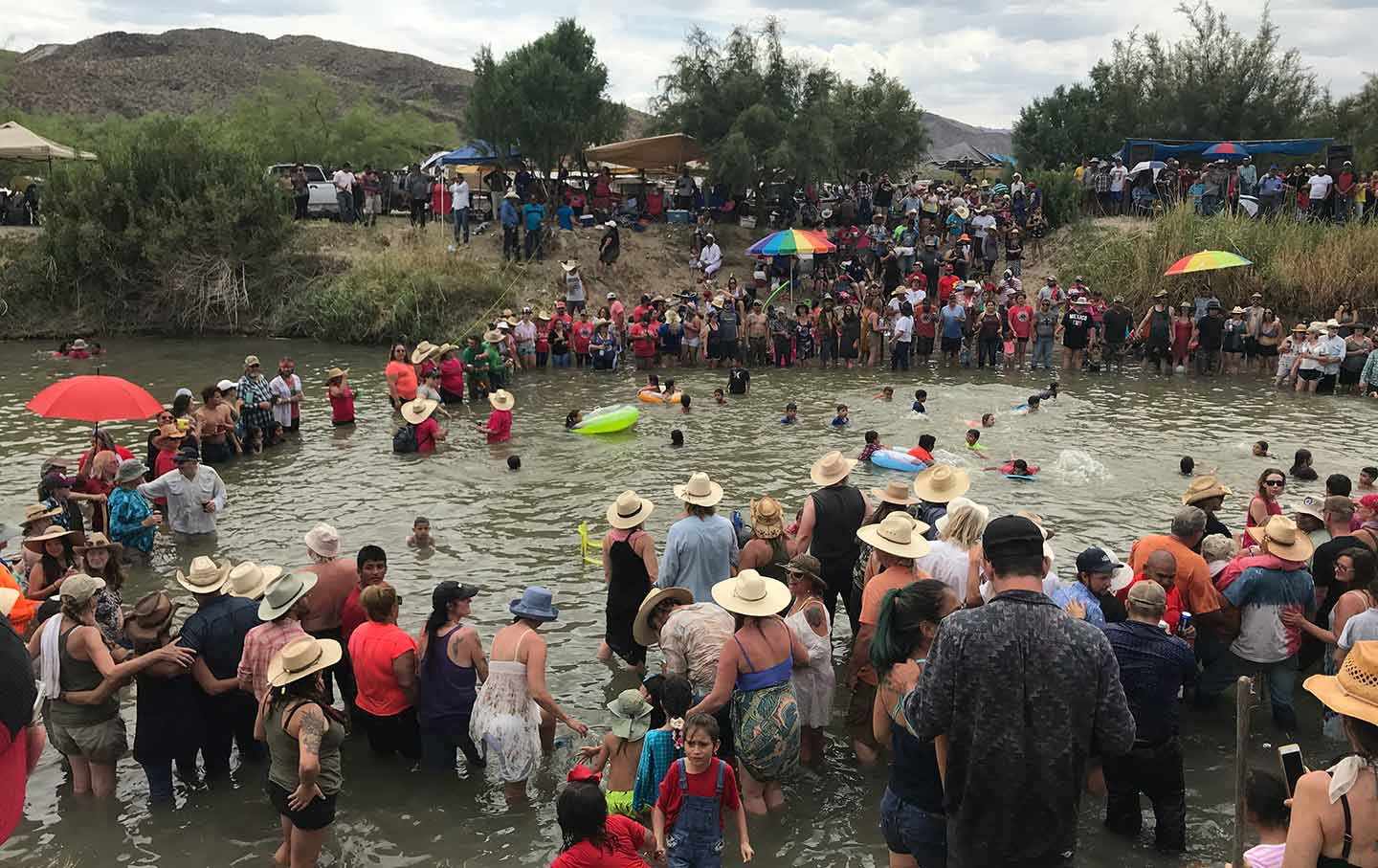 At the Voices From Both Sides festival, attendees held hands in a circle in the middle of the Rio Grande, which acts as the US-Mexico border. (Sasha von Oldershausen)

lajitas, texas
At the Voices From Both Sides festival on May 12, families wore matching T-shirts as a show of solidarity. The Carrascos wore red. The Rodriguez family wore bright-pink shirts with black lettering: proud to be a rodriguez. 1

The festival, in its sixth year, drew hundreds from both sides of the US-Mexico border to the muddy banks of the Rio Grande. There, families and friends met in the middle of the river, an international boundary, to celebrate their cross-border community. 2

Jeff Haislip and Collie Ryan, residents on the Texas side, along with their friend from across the river, Ramon Garcia, founded the party in 2013 as a protest of the tightened border-security measures enacted after 9/11. “There’s a subtle but obvious change in the culture,” said Haislip, who has lived in the region full-time for 10 years but visited frequently for about 30. “It starts with people that used to get to know each other don’t get to know each other anymore. Lajitas is a totally different place now.”3

Ryan threw the issue in stark relief: “I lived here downriver when this was one community between two countries. It was such a loving neighborhood,” she said. “Now our country is at war.” 4

The event takes place between the Texas town turned golf resort, Lajitas, and its Mexican sister city, Paso Lajitas, a name suggestive of the tradition of passage between them. Historically, the swath of river between the two towns served as a key transit point. In the 19th century, the area became a trading post. Until 2002, the stretch between them was one of several unofficial ports of entry, where a lone boatman would ferry people across the river. But during the George W. Bush administration, this and other ports like it were shut down. 5

These are changes that gradually transformed the dynamics of this border region, and those who live here have made the necessary adjustments to adapt. But this year, amid an administration that wants to fortify the entire border, the atmosphere felt more urgent. The party was bigger than ever, with crowds on both sides of the river; the mood was jovial, with an edge of defiance. A handful of people wore shirts emblazoned with the Spanish words chinga tu muro, or “fuck your wall.” 6

Some were there for the party. But for others, the event has also become a reunion. Families use the once-a-year crossover as an opportunity to see relatives they otherwise can’t visit due to immigration barriers. Zulma Carrasco, 38, traveled from her home in Houston—a nearly 10-hour drive—to see her parents, who live across the border in Mexico. A Mexican national, Carrasco has a work permit, which enables her to travel freely within Texas, though not across national borders. Meanwhile, her parents lack the paperwork to freely enter the United States. This is a familiar situation for many who attend the festival.8

Carrasco, who has lived in Houston for 11 years, said she still holds out hope that her situation will improve: “I’m waiting for my oldest son to turn 21 so he can turn in the paperwork to sponsor my citizenship.”  9

It was her third time attending the festival. The first time, she hadn’t seen her parents in seven years. After that, she made it her prerogative to attend yearly, though last year she couldn’t make it because the work permit, which she renews annually, arrived several months later than usual.10

“After the new president, all the paperwork was late,” Carrasco said. “I applied for my permit in December 2016, but it didn’t arrive until October 2017.” She remarked that in the past, it’s taken about three months for the US government to issue her permit. Because of the delay, she wouldn’t be able to travel outside of Houston without fear of being penalized. She missed the chance to see her parents on the only day she could.11

At this year’s festival, she sat beside her mother within a tent teeming with family members. But by day’s end, her mother would have to return to Mexico. When I asked how it felt to see her parents again, Carrasco fell silent and hung her head. “Very, very happy,” she whispered through tears. “This day isn’t long enough.”12

In these far reaches of the Chihuahuan Desert, days move languidly and not much changes fast. The Big Bend region’s mountains, banded by thick deposits of limestone and shale, serve as perpetual reminders of a history that precedes civilization and resounding evidence to those who reside here that a border wall—no more impassable than the mountains themselves—needn’t exist. 13 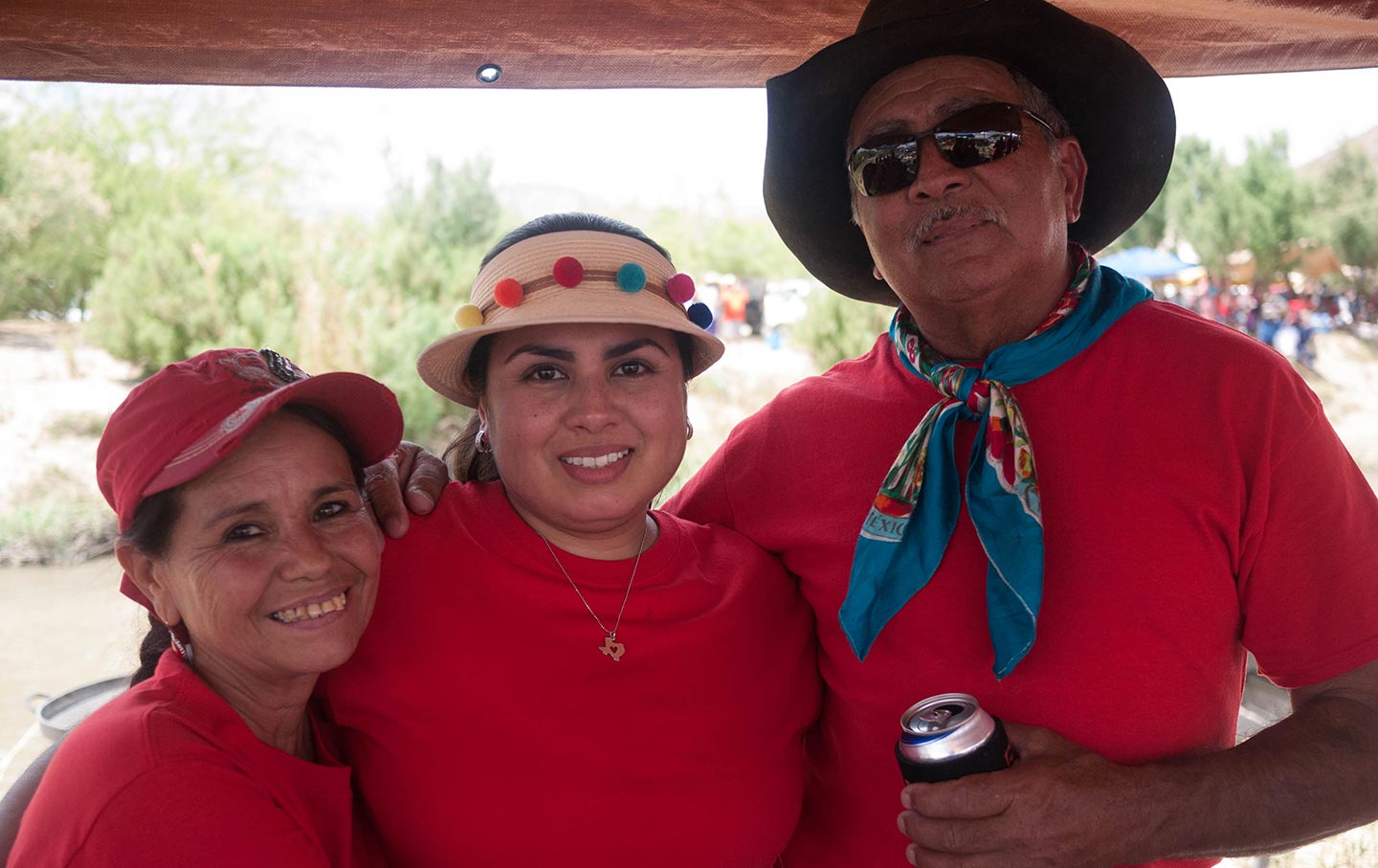 Zulma Carrasco, center, reunited with her parents Rosa and Jesus at the Voices From Both Sides festival, where once a year families from both sides of the US-Mexico border meet in the middle of the Rio Grande. (Sasha von Oldershausen)

Still, under the Trump administration, even this remote region has begun to feel change. Last month, in response to Trump’s call to deploy the military to the border, some 50 to 80 National Guard troops were sent as support to the Border Patrol’s Big Bend Sector, which oversees this stretch of the border. The move felt at odds with the needs of the border communities that reside here.15

“They’re supposed to work for us,” said Haislip, referring to the federal government. He remarked that he and his fellow organizers will continue hosting the Voices From Both Sides celebration until the port of entry reopens. He added, “We don’t want it closed. Closed is division. We want togetherness.”16

Over 7,000 Bodies Have Been Found at the US-Mexican Border Since the ’90s

On a stage on the Texas side, musicians serenaded Mexico with songs about la frontera. Their faces gleamed with sweat as they withstood 100-plus degree heat. Others found respite from the sun in the cool but murky river. A couple danced to cumbia music calf-deep in water, impervious to the hard stones at their feet. 17

A yellow line spanning the width of the river and tethered to either side provided a guide for those crossing. On the Mexican shore, vendors sold tacos, elote, and heaping bowls of fruit doused red with chile. On the Texas side, attendees brought aluminum trays filled with pasta salad, while others cooked burgers and frozen pizza on a flat grill. People crossed back and forth across the river freely and in clear sight.  18

Though Haislip holds out hope that the port of entry will soon reopen, Ryan had a more cynical outlook: “Maybe it will. Maybe it won’t,” she said, adding that in a world so fraught with conflict, what’s more important is the prevailing sense of community. “Families are seeing each other. It’s beautiful to see.” 19

As the Carrasco family lined up for a photograph in their matching red shirts, Zulma’s mother wrapped her arm around her daughter’s side and looked at her smiling. The next day, as others celebrated Mother’s Day, Zulma would not see her mother. Instead, she will have to wait another year, until the two of them can meet once more in the middle of the Rio Grande. 20