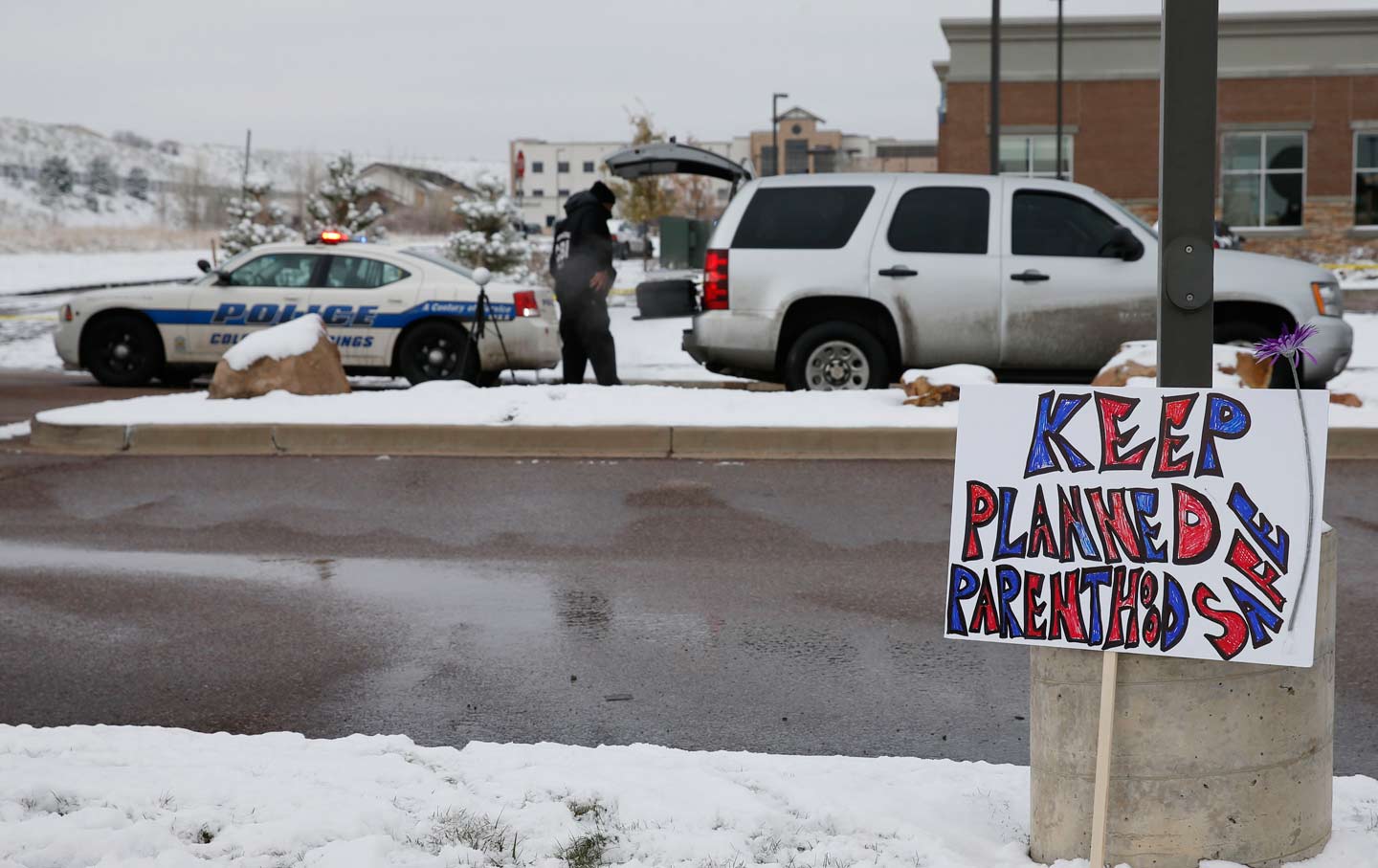 A sign in support of Planned Parenthood stands outside the Colorado Springs clinic two days after the shooting, on November 29, 2015. (AP Photo / David Zalubowski)

It’s been a while since a journalist set the world straight on this whole abortion thing. Dana Milbank did it a few years ago in his Washington Post column—if only “both sides” would stop grandstanding and endorse contraception! David Frum had some thoughts about it, and so, way back in time, did abortion opponents Christopher Hitchens and Andrew Sullivan. Usually these people find abortion disturbing/wrong/immoral. Usually they don’t know much about the subject and are just parachuting in. And yes, usually these people are men.

“I am opposed to abortion,” Kurt Eichenwald begins his Newsweek cover story “America’s Abortion Wars (and How to End Them).” “I am opposed to abortion. I believe women have the right to choose. This is not a contradiction.” Well, okay. Most Americans would sort of agree with him on that—they don’t like abortion, but they want it to stay legal. “Opposed” is a strong word, though, and Eichenwald never bothers to explain why he is against abortion, or why his opinion matters, or what it means. Would he urge a wife, a lover, a child, a friend to keep an unwanted pregnancy? Would he support efforts to persuade others that abortion is wrong? His statement just hangs there, demonstrating his impartiality and seriousness, as part of his overall strategy of equating pro-choice and anti-choice movements. We’re “a country torn apart by absolutists.” “Both arguments are infused with hypocrisy, and consequences often go unconsidered while bumper-sticker logic prevails.” On the one hand, “Male commentators are frequently—and often rightfully—accused by pro-choice advocates of ‘mansplaining.’” On the other, “anyone broaching the other side of the argument is deemed a baby killer.” According to Eichenwald, accusing a man of “telling women what to think” is like accusing an abortion provider of murdering children. Really? As the blogger Choice Joyce asked, “When’s the last time you heard about a deranged feminist going on a murderous shooting rampage against mansplainers?”

Sorry, Newsweek. In the so-called abortion wars, only one side is murdering the other. Pro-choicers don’t invade Christian “crisis pregnancy centers,” guns blazing; they don’t picket Catholic churches and scream at the people going into worship. Only one side wants to force women to do their bidding. Only one side fights broad access to birth control and realistic sex education. Only one side has allied itself with the Republican Party, which wants to cut every program and rescind every law that helps women and children and promotes gender equality in the work place.

Eichenwald fails to realize that his “brilliant new idea” is what today’s reproductive-rights movement is all about.

What makes Eichenwald’s “both sides do it” claim so strange is that his piece is actually a sustained and detailed attack on the anti-choice movement. He makes a forceful case that it lies about the safety of abortion in order to close clinics and doesn’t care if women die. He reminds readers that abortion is safer than childbirth and that women have abortions whether or not abortion is legal (before Roe, as he notes, American women had over 1 million abortions per year, about the same as now in a much smaller population). He claims almost nobody really believes that fertilized eggs are people, and argues for the abortion rights of rape victims by citing Judith Jarvis Thomson’s thought experiment in which a woman wakes up to find herself hooked up to a famous violinist who will die if she denies him the use of her body as a support system. He points out that most abortions happen in the first trimester, and only 1.5 percent after 21 weeks, although abortion opponents love to talk about the latter. By contrast, he makes no specific arguments against the pro-choice position. So where’s the “absolutism” on the abortion-rights side? Where’s the hypocrisy and the bumper-sticker logic? He never says.

But then, Eichenwald doesn’t seem to know much about the actually existing reproductive-rights movement. As if drawing a rabbit out of a hat, he points out that the majority of women (69 percent) who have abortions today are poor or low-income. This will come as a surprise to few people involved with supporting abortion rights and access—or who have spent an afternoon in a clinic waiting room. He notes that a study shows that three-quarters of women choosing abortion give finances as one reason (he skips over the study’s conclusion that typically women give multiple reasons, including responsibilities to others, lack of a partner and not being ready for motherhood). Since poverty is the cause, the way to end the abortion wars is for both sides to “put down their placards and open their wallets”—i.e., support laws and programs that will help poor women keep their pregnancies if they want them. “Here,” he writes, “are all the new costs”: an increase in the minimum wage, free government-funded daycare, free prenatal care, stronger legal protection for pregnant workers, and an end to the fight against Obamacare.

It’s a pretty minimal list—it doesn’t even include paid parental leave or subsidies for low-income women who want to go to college as mothers, or help with housing or support in escaping abusive men. It doesn’t consider that having a baby affects a woman’s life forever, not just while she’s pregnant or a new mother. And it has a strange focus on adoption as part of the solution. If he’d looked into the literature on adoption, he would have discovered that very few women (and black women least of all) are interested in having babies to give to adoptive couples—even ones who are willing to pay for their prenatal care, as he suggests. Almost all women who go through pregnancy and childbirth seem to want to keep the child.

That he considers his list complete shows that Eichenwald hasn’t spent a lot of time looking at women’s lives. He’s spent even less looking at the pro-choice movement, which he seems to think is a bunch of child-hating tightwads, when in fact most pro-choicers are Democrats. The anti-tax crowd is in the other party—the anti-choice party.

Worst of all, he does not seem to know that the brilliant new idea he thinks he figured out on his own is what today’s reproductive-rights movement is all about. That women need the right to have babies as well as not to have them, that freedom from poverty—and racism and violence—is part of that right, is called reproductive justice, and for 20 years it’s been gradually replacing the libertarian “choice” framework for the abortion-rights movement. Today even Planned Parenthood embraces it. If only Eichenwald had picked up the phone and actually talked to some pro-choice leaders and thinkers. Loretta Ross, founder of the black-feminist organization SisterSong, where the reproductive-justice framework originated, could have set him straight in five minutes.

To be told to do what you’ve been doing for years. I’m sorry, Kurt Eichenwald. That is a very good definition of mansplaining.