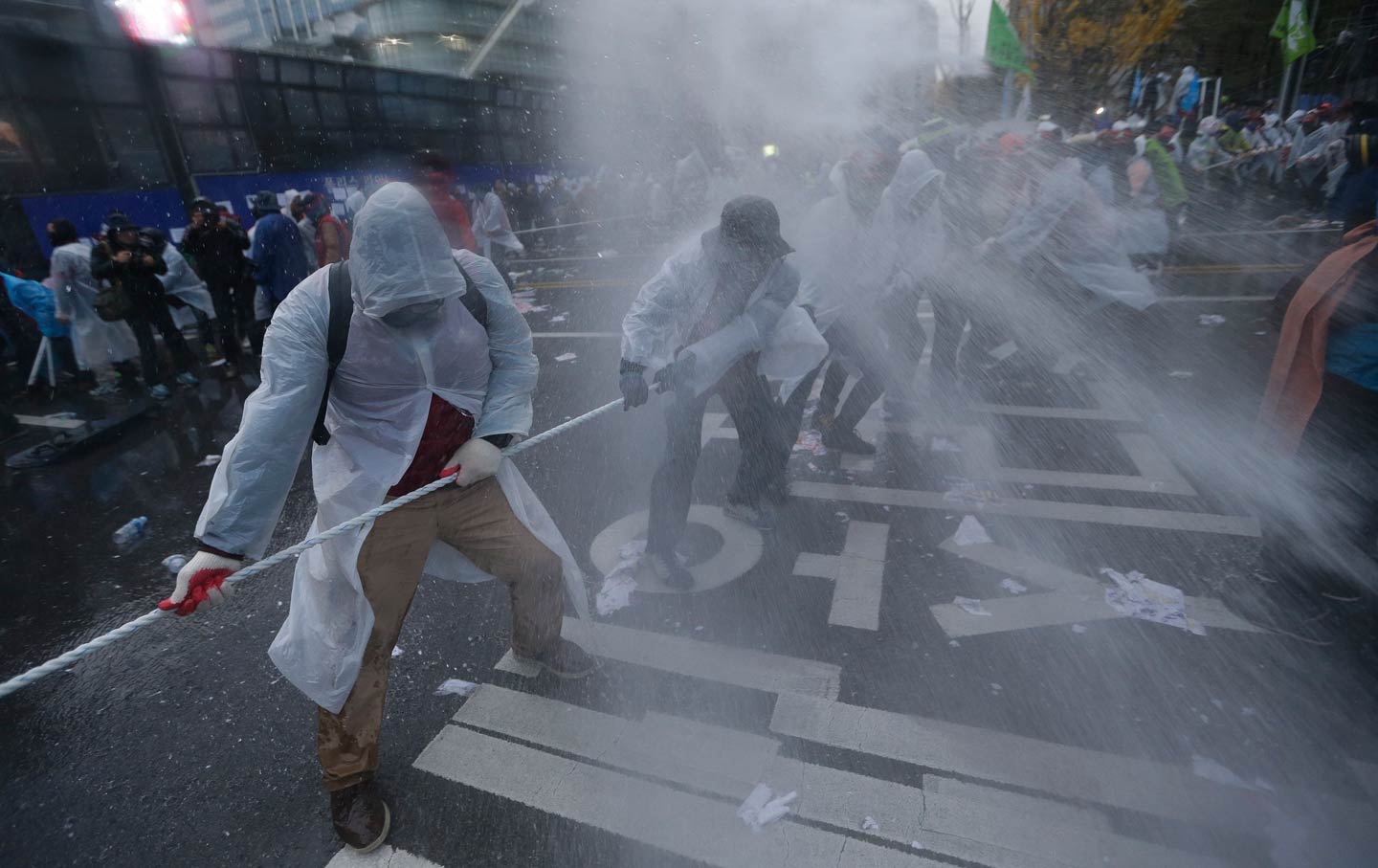 South Korean police officers spray water cannons to try to break up protesters who tried to march to the Presidential House after a rally against government policy in Seoul, November 14, 2015. (AP Photo / Ahn Young-joon)

Following in the footsteps of her dictator father, South Korea’s President, Park Geun-hye, is cracking down on labor and citizens groups opposed to the increasingly authoritarian policies of her ruling “New Frontier” party known as Saenuri.

The situation could reach a critical point this weekend, when tens of thousands of workers organized by the Korean Confederation of Trade Unions (KCTU) join forces with farmers, students, and other civic organizations in a national action in Seoul to protest Park’s conservative labor, education, and trade policies.

On Saturday, the Seoul Metropolitan Police Agency banned the march, with Park’s Justice Minister Kim Hyun-Woong vowing to “uproot illegal and violent demonstration…no matter how much sacrifice is required.” Meanwhile, the president herself equated the protesters—some of whom wear masks as protection from riot police—to terrorists.

“Given that the extremists of the Islamic State group hide their faces, we should ban demonstrators from wearing masks in the future,” Park said, before flying off to Paris for this week’s Climate Change Conference. She last visited Washington in October, when President Obama, her country’s strongest ally, promised that the United States “will never waver” in its commitment to South Korea.

But inside Korea, her actions have brought back memories of her father, General Park Chung-hee, who seized power in 1961 and ruled with an iron hand until he was assassinated in 1979 by the director of the country’s equivalent of the CIA.

In 1979, Park’s government was in the midst of a savage repression of workers and students who were trying to organize for improved conditions and livable wages during a time of rapid, export-led economic growth. After his death, conditions worsened when another general, Chun Doo-hwan, took over in a bloody coup that culminated in the Gwangju citizens’ uprising, which was put down with assistance from the United States. Chun continued Park’s draconian treatment of unions and dissidents for nearly a decade.

A democratic system was finally established in 1987 after millions of Koreans filled Seoul’s streets for weeks, demanding an end to military rule and for direct elections of their president. It was out of that tumult, and a series of famous industrial strikes, that the KCTU was born. It is now the country’s second-largest union group and by far the most militant.

For the past six months, it has been organizing resistance to a raft of labor reforms pushed by President Park that will make it easier for the country’s family-run conglomerates (called chaebol) to fire workers and provide “flexibility” to Korean and foreign corporations. The law’s primary aim is to increase the huge number of part-time “irregular” workers in Korean industry (20 percent of the workforce, one of the highest rates in the industrialized world) and allow public and private employers to make unilateral changes in working conditions without consulting unions.

The reform “essentially implements a wish list of measures long advocated by corporate leaders, who hope to see their profits soar as a result,” Korea watcher Gregory Elich reports in a detailed article in Counterpunch. To increase pressure on the government, the KCTU says it will launch a general strike of its 680,000 members if the National Assembly moves to pass the reforms. That could happen shortly before Christmas.

“We have staked everything in this fight,” KCTU president Han Sang-gyun said in an interview with New York journalist Hyun Lee. “We’re talking about workers stopping production, freight trucks stopping in their tracks, railroad and subway workers on illegal strikes, and paralyzing the country so that the government will feel the outrage of the workers.” He says the labor reforms will “turn the entire country into a pool of irregular/precarious workers who can be dismissed at any time without cause.”

Over the weekend, the KCTU accused the government of “regressing to the dictatorial era” and called Park’s denial of its constitutional right to assembly “tantamount to the self-acknowledgement that the current government is a dictatorship.”

In recent weeks, police have conducted raids on union offices throughout South Korea. In one action, police invaded the national offices of the Korean Federation of Public Services and Transport Workers Union, seizing documents and computer hard-drives from the cargo workers. Many of its actions have been directed at public employee unions. Last spring, the government stripped the Korean Teachers and Education Workers Union, with 60,000 members, of its representational rights.

Park’s crackdown has angered labor activists around the world, who claim that South Korea’s actions violate commitments it has made to respect worker rights in international trade and financial agreements signed over the past two decades. “South Korea is well on the way to becoming a pariah state in terms of trade union rights,” Owen Tudor, a top official with the British Trade Union Congress said last week.

In 2014, the International Trade Union Confederation ranked South Korea as among the world’s worst countries for worker rights. It was listed alongside China, Cambodia, Nigeria, and Bangladesh as a place where workers “are systematically exposed to unfair dismissals, intimidation, arrests and violence often leading to serious injuries and death,” The Wall Street Journal reported. LabourStart, an international solidarity group, has launched an online petition calling on South Korea to “Stop attacks on trade unions now.”

KCTU’s Han, who was elected president of the confederation last year, is currently taking refuge in a Buddhist temple in Seoul to avoid arrest by government security forces. The police ordered his arrest last spring after he refused to appear before prosecutors investigating the KCTU for allegedly violating traffic and assembly laws during large Labor Day demonstrations on May 1. Since then, the temple has been surrounded by dozens of officers waiting for him to emerge.

The government holds KCTU and its member unions responsible for the massive demonstrations calling for President Park’s resignation that disrupted Seoul on November 14. On that day, scores of protesters and police were injured in street battles that erupted after security forces tried to disperse protesters with tear gas and water cannons loaded with pepper spray.

During the confrontation, Baek Nam-gi, a 69-year-old leader of the Korean Catholic Farmers Movement, suffered a brain injury after being knocked down by a water cannon. He remains unconscious at a Seoul hospital and has since become a rallying point for the peoples’ movement. On Saturday, his daughter Minjuhwa released a plaintive message to supporters, saying “My father is not a terrorist; he has led a good, honorable, respectful, and decent life. We sincerely wish for justice.”

Many Korean activists were further shocked when a senior official in Park’s ruling Saenuri Party pointed to the routine use of force by police in America to justify Seoul’s crackdown on dissent. “In the United States, the police use their firearms to kill people, and in 80 percent to 90 percent of these cases, they’re ruled as justified,” said National Assemblyman Lee Wan-yeong, according to Korean press reports. “Isn’t that how government authority works in advanced countries?”

“Everything the government and the ruling party are doing is very shocking and goes beyond our imagination,” Mikyung Ryu, the KCTU’s international director, said in an e-mail to supporters on Sunday. The public appears to be fed up too. After President Park’s veiled attack against masked protesters, netizens took to social media “to lampoon her remarks,” with “graffiti satirizing the president popping up across the nation,” The Korea Herald reported.

The People Power Coordinating Body behind the protests was organized by the KCTU and the Farmers Movement principally to fight the labor reforms, which are seen as hurting all workers as well as the urban poor. KCTU’s rival organization, the Federation of Korean Trade Unions backs the reforms. In total, South Korea’s unionization rate is 10.3 percent—higher than that of the United States.

The “people power” coalition is also focused on the impact South Korea’s free trade agreements with the United States and China will have on the country’s rice farmers, whose numbers have drastically dwindled during the period of export-led manufacturing.

Another pressing issue is the Park government’s determination to take control of the writing and publication of the nation’s history textbooks. Many Koreans see this as Ms. Park’s attempt to cleanse the dictatorial legacy of her father and his supporters still in government and the military. Equally sensitive is the large number of government officials, past and present, who collaborated with Japan during its colonization of Korea from 1910 to 1945. Park’s own father, for example, was trained by the Japanese Imperial Army during World War II.

Park’s move on history books has drawn sharp criticism abroad, including from The New York Times, which uncharacteristically ripped into Park in a November 19 editorial. “Rehabilitating her father’s image appears to be one motivation for making sure South Korea’s students learn a whitewashed version of their country’s history—especially the period when democratic freedoms were seen as an impediment to industrialization,” the Times wrote.

The KCTU’s Han compared Park’s attempt to rewrite history to Japan’s refusal to acknowledge its crimes during World War II. “South Koreans have always been critical of Japan’s distortion of history, but now the Japanese media is pointing its finger back at us for doing the same thing,” he told Lee, the New York journalist. “This is an embarrassment.”

On Monday, the police announced a new plan to disrupt the December 5 demonstrations, saying it would spray paint into the crowd to “better distinguish protesters committing violence and arrest them on the spot.” But the KCTU and its coalition partners have vowed to press on with the protests.

Editor’s note: This article has been updated to conform to current transliteration style for Korean names regarding the city of Gwangju (instead of Kwangju) and Baek Nam-gi (instead of Baek Nam Ki). Also, the Korean Peasant League has been changed to Korean Catholic Farmers Movement; the former was a mistranslation.