Impeachment is not a constitutional crisis.

Impeachment is the cure for a constitutional crisis.

Like any antidote, it must be employed judiciously. When the crisis arises, however, patriots cannot be cautious about utilizing the strong medicine that was conjured in the summer of 1787 by the authors of a Constitution that was written with an eye toward averting the elected despotism of a president who might conspire to make himself “a king for four years.” 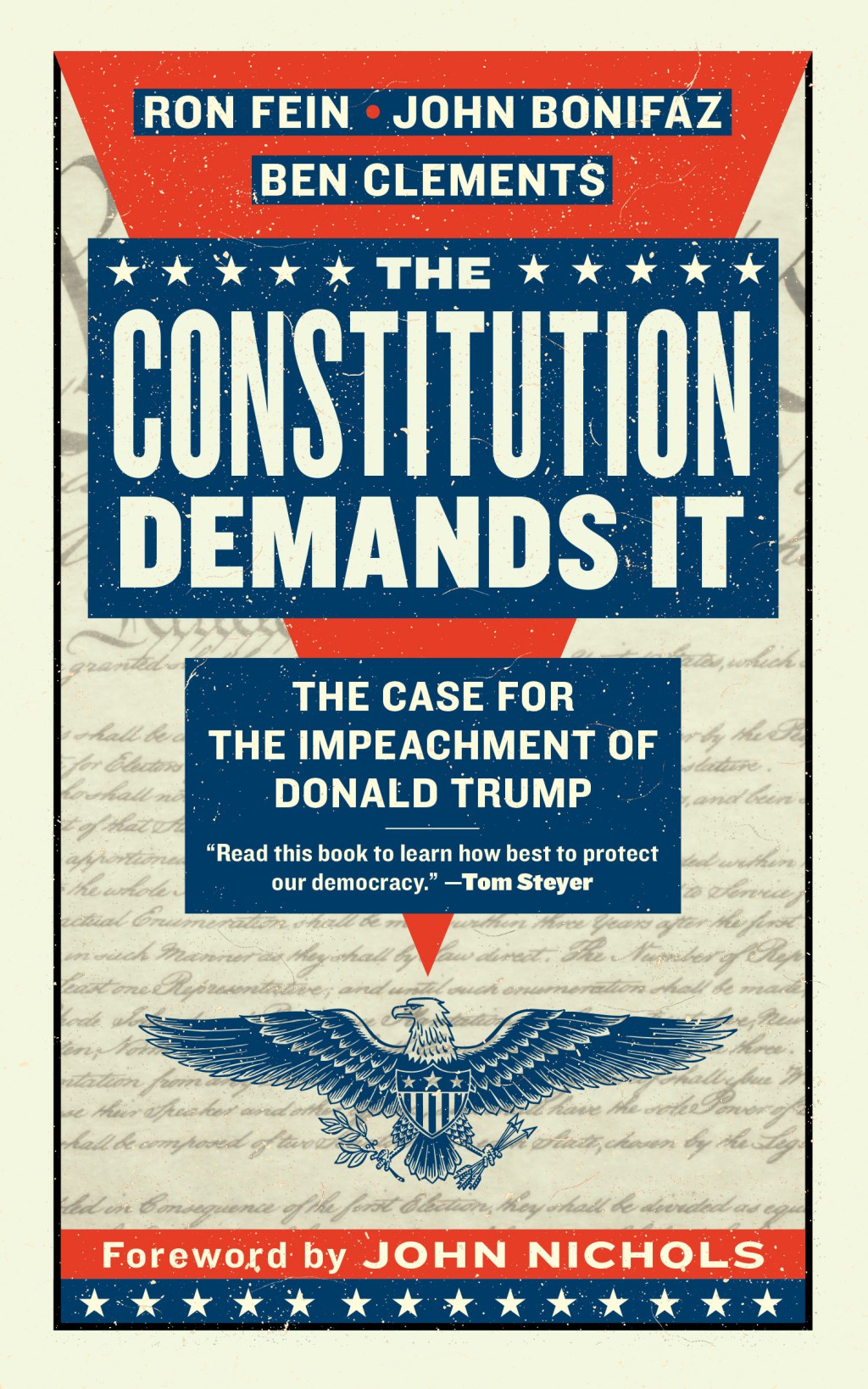 This is an excerpt from John Nichols’s foreword to the new book by Ron Fein, John Bonifaz, and Ben Clements, The Constitution Demands It: The Case for the Impeachment of Donald Trump, which was published this month by Melville House.

The wisest of the delegates who gathered in Philadelphia, just four years after their rebellion had seen off the rule of King George III, were well aware that their imprecise efforts might forge not just a new nation but a new approach to governing. They well recognized the vulnerabilities of a project that experimented, however tentatively, with the revolutionary prospect of democracy. They worried, as Lincoln would decades later, about “whether that nation, or any nation so conceived, and so dedicated, can long endure.” Above all, they recognized that their project of replacing the rule of man with the rule of law would be threatened by what George Mason described as the “easy step to hereditary Monarchy.” To avert it, Mason warned, “No point is of more importance than that the right of impeachment should be continued.”

It would, Mason suggested, provide an eternal answer to questions that plagued the convention as it pondered the presidency: “Shall any man be above justice? Above all, shall that man be above it who can commit the most extensive injustice?”

Mason placed his faith in a rigorous system of checks and balances that was enforced, ultimately and definitively, by the power of the House of Representatives to impeach a president whose continued tenure threatened the republic, and of the United States Senate to remove the offending officeholder.

Impeachment was never meant to be about crimes and punishments. It was intended at the founding of the American experiment, and should be so understood today, as a remedy for the monarchical tendencies of men who answer Mason’s questions differently than did the Virginian and his compatriots.

Donald Trump is such a man.

In the spring of 2018, as the 45th president of the United States and his legal minions scrambled to limit the scope of questioning of the commander in chief by special counsel Robert Mueller, Trump revealed himself. He insisted that the deputizing of a veteran lawman as an investigator of monumental concerns regarding manipulation of the electoral and governing processes by foreign powers was “totally UNCONSTITUTIONAL!” Trump claimed that he cooperated with the inquiry not out of respect for the laws of the land but because he chose to do so as one who claimed to “have done nothing wrong.” At the same time, Trump asserted that he retained an “absolute right” to pardon himself should the heat of official scrutiny grow too intense.

These were not the words of a Democrat or a Republican. They were monarchical words, uttered by a man whose tenure had strained even the most liberal interpretations of executive authority. Now, this man was asserting that he was above justice. And, yes, he was doing so as the man who, by virtue of his position, could commit the most extensive injustice.

These are the rough outlines of the constitutional crisis that the founders feared. Our contemporary media and political elites recognize its contours. They know the sickness is upon us. Yet they choose, out of quivering fear and overwhelming incomprehension, to reject the constitutional remedy. After too many years of making too many apologies for an imperial presidency, too many of those who define our discourse have lost any real sense of the anti-royalist “spirit of 76” that Jefferson asserted in his final letter should forever serve as “the signal of arousing men to burst the chains, under which monkish ignorance and superstition had persuaded them to bind themselves, and to assume the blessings and security of self-government.”

The essential author of the Declaration of Independence was a flawed man who can be criticized for missteps and misdeeds—as can all of the founders. Yet Jefferson, a man of the world who had traveled more broadly than his revolutionary co-conspirators, was surely right to assert that ignorance could bind not just human beings but nations. If we do not recognize the threat posed by a president who imagines himself to be above the law, or by those who suggest that this man’s tenure may not be interrupted by the subpoenas and the investigations and legal requirements that demand the respect of all other Americans, then surely we have abandoned the most basic premises of the American experiment.

Why the Manafort and Cohen Convictions Are a Historic Turning Point

Americans should not accept so perilous a surrender. Rather, as constitutional lawyers Ron Fein, John Bonifaz, and Ben Clements argue, we must burst the chains of our contemporary superstitions regarding impeachment and restore a proper understanding of its role in maintaining the right balance of American governance. Misguided people who imagine that liberty and justice for all can long survive in circumstances where a president places himself above the law may fret about the political consequences of addressing a constitutional crisis with a constitutional remedy. They foolishly imagine that it is better to wait a lawless presidency out, with faint hope for better results on some distant election day. They refuse to recognize that each failure to demand necessary accountability invites greater abuse and diminishes the prospect that accountability will ever be achieved. When human beings who are ailing receive prescriptions for curing medications and then refuse to take them, we are horrified because we know these choices may lead to their deaths. What we must understand is that republics are similarly vulnerable. They, too, can die from lack of proper treatment in moments of emergency.

Because impeachment is a political process, it must develop in the political context of a Congress whose members are not always courageous, who are invariably calculating, and who are easily distracted in even the most urgent of circumstances. Three presidents have been seriously targeted for impeachment by the House. Two were impeached, and then acquitted by the Senate. One was at the brink of impeachment—following the decision of the House Judiciary Committee to support three indicting articles—but chose to remove himself before trial.

There are those who argue that the resignation of Richard Nixon upended the impeachment process, but anyone who understands the point of a system of checks and balances will recognize the absurdity of this claim. Nixon was threatened with impeachment and removed himself—thus ending his abuses of power and restoring the proper functioning of the office of the presidency. By any reasonable measure, that was a successful application of the constitutional remedy. Keep in mind that the point of impeachment has always been to address the abuses of executive authority that might see a president assume the mantle of an “elected despot.” Whether a president is impeached and convicted or simply resigns in order to avoid inevitable impeachment and conviction, the constitutional crisis has been cured.

These are different times. There are plenty of pundits and politicians who now assert that partisanship has become so great that the impeachment process cannot be made to work—not by a Republican-controlled Congress, certainly, but not even, we are told, by a Congress that, after November, might be controlled, or partially controlled, by Democrats. If that is the case, if impeachment is truly and permanently “off the table,” then the United States has not retained impeachment as an instrument of the Constitution. The licensing words may remain in the document, but they are merely assertions of an ideal—not a practical tool for making real the founding promise of accountability for errant executives.

If we have reached such a point, then the American experiment is finished. Donald Trump may be voted out of office after one term. Or he may retire after two. Better presidents may come. Or worse. But the vision that ours would be a government of laws, not men, will be finished. We will, like the monarchies of old, be able to hope for no more than a “good king.” We will be more akin to the monarchies of old, which might have produced a “Bad King John” or a “Good King Richard,” but that always had kings. And those kings ruled by divine right, rejecting the rule of law in favor of rule by fiat—just as Trump does when he says that he cooperates with inquiries not out of respect for the rule of law but because he believes he has “done nothing wrong.”

This new America, with its diminished system of checks and balances, in which impeachment is never an option, will not be a formal monarchy. Jurists may still prattle on about statutory requirements, and those requirements will undoubtedly be applied to citizens. But those requirements will no longer be applied to the executive branch, which will go from bad to worse, on a downward spiral of imperial presidents, in which good commanders in chief are the exceptions that prove the rule. The failure of Congress to hold Ronald Reagan and George H.W. Bush to account for their Iran/Contra transgressions cleared the way for George W. Bush and Dick Cheney to engage in far more destructive transgressions in Iraq. A failure to hold Donald Trump to account for his lawlessness all but guarantees that a more lawless president will eventually occupy the Oval Office. To think otherwise is to engage in the cruelest of fantasies.