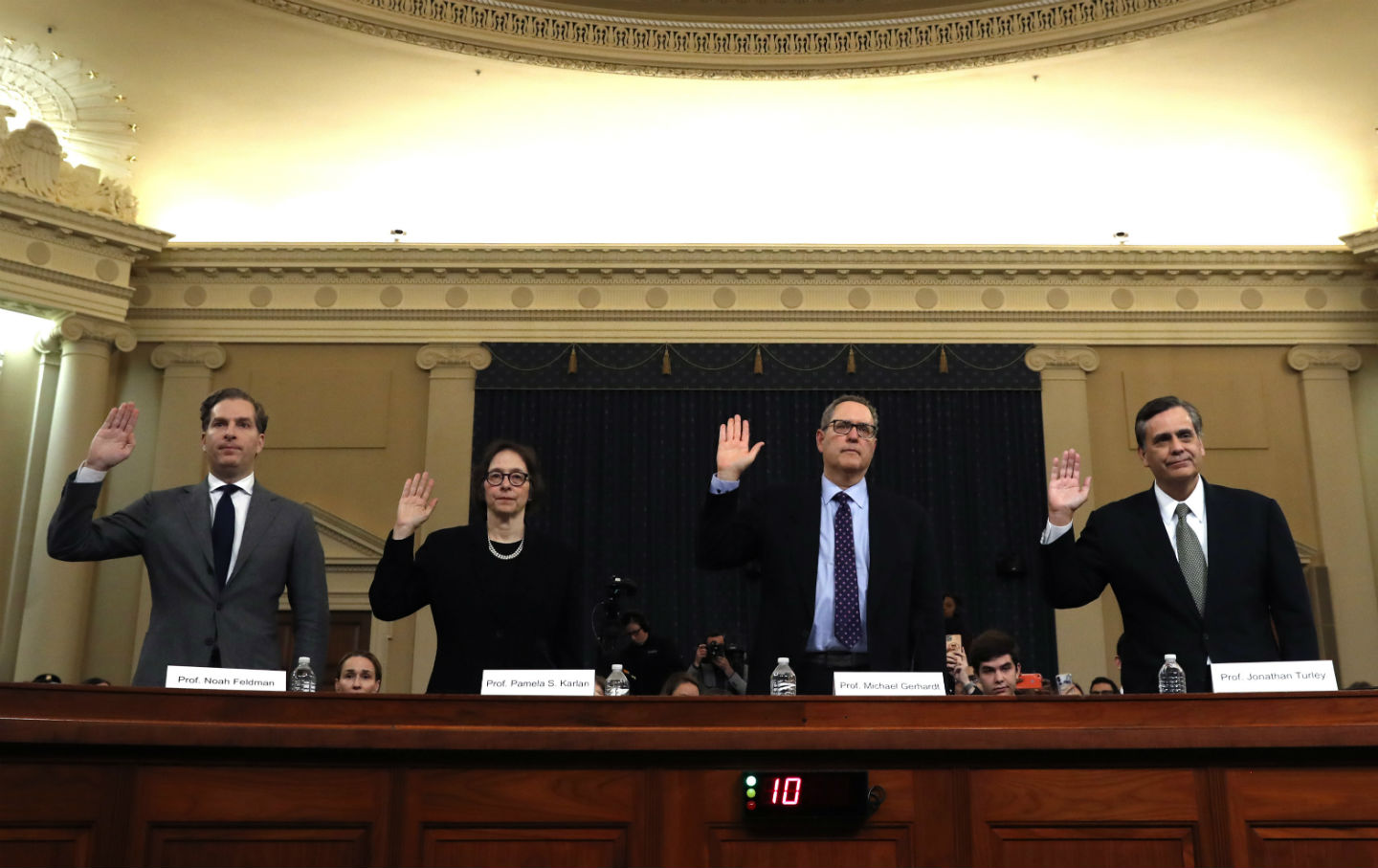 Constitutional law experts Noah Feldman, Pamela Karlan, Michael Gerhardt, and Jonathan Turley are sworn in to testify during a hearing before the House Judiciary Committee on the constitutional grounds for the impeachment of President Donald Trump on December 4, 2019 (AP Photo / Jacquelyn Martin)

This is what they do. We shouldn’t be surprised.

After three constitutional scholars spent hours making an unimpeachable case for impeaching Donald Trump, while George Washington University’s Jonathan Turley vainly argued otherwise, the whole exercise was upstaged by the well-greased GOP grievance machine. You heard about it: In arguing that Trump was behaving more like a monarch than a democratically elected head of state, Stanford University’s Pamela Karlan quipped, “The Constitution says there can be no titles of nobility, so while the president can name his son Barron, he cannot make him a baron.”

Cue the furies! White House Press Secretary Stephanie Grisham called the joke “classless,” while first lady Melania Trump harrumphed in a tweet: “A minor child deserves privacy and should be kept out of politics. Pamela Karlan, you should be ashamed of your very angry and obviously biased public pandering, and using a child to do it.” Vice President Mike Pence, brown noser in chief, grabbed the baton: “Impeachment hearings reached a new low,” he intoned, with Karlan’s Barron comment. “Democrats should be ashamed. Enough is enough.” Sadly, ABC’s David Muir even included it in his World News Tonight introduction: “The moment one witness brings up the president’s youngest son—did she cross the line?” (Spoiler alert: No, she didn’t.)

Of course, Karlan’s Barron comment wouldn’t have made headlines without the boost from the teenager’s alleged protectors. If anybody invaded the boy’s privacy, it was the people who blew this up into a big story. Karlan quickly apologized (she didn’t need to), but the right wing, a few mainstream cable hosts, and David Muir had the distraction they needed.

Ultimately, the day-long hearing did exactly what it was intended to: At 9 am sharp on Thursday, Nancy Pelosi announced, “Today I am asking our chairmen to proceed with articles of impeachment. The facts are uncontested: the president abused his power for his own personal political benefit at the expense of our national security.” The three scholars chosen by the Democratic majority made Pelosi’s case, painting a vivid picture of a president who habitually abuses his power, most notably in trying to pressure Ukranian leaders to investigate his political enemies in exchange for military aid. “We three are unanimous” that Trump committed impeachable offenses, said University of North Carolina law professor Michael Gerhardt, a leading scholar of impeachment who is not known as particularly partisan.

“If what we’re talking about is not impeachable, then nothing is impeachable,” Gerhardt continued. “This is precisely the misconduct that the framers created the Constitution, including impeachment, to protect against.” Harvard’s Noah Feldman agreed. “President Trump’s conduct clearly constitutes impeachable high crimes and misdemeanors.”

Karlan’s verdict was no less stark: “What has happened in the case today is something that I do not think we have ever seen before: a president who has doubled down on violating his oath to faithfully execute the laws and to protect and defend the Constitution.” Karlan termed Trump’s holding back Ukraine military aid to leverage a political investigation “bribery.”

The hapless GOP witness, Jonathan Turley, tried to depict Democrats as rushing to judgment, “lowering impeachment standards to fit a paucity of evidence and an abundance of anger.” Turley first came to national attention as a Democrat who nonetheless supported the impeachment of President Bill Clinton 20 years ago, so his legal judgment was pretty easily impeached by the panel. In one of the day’s sillier moments (before Karlin’s Barron comment sucked up all the silly), he mocked the Democrats’ reliance on anger over evidence by noting that he knows many people are angry at Trump.

“Even my dog seems mad—and Luna is a goldendoodle and they don’t get mad,” he said. (For a while, Jonathan Turley’s goldendoodle trended on Twitter.) Turley cited A Man for All Seasons to argue that we must “give the devil the benefit of the law.” When the GOP’s witness is comparing Trump to the devil, you know they don’t have much to work with. Turley’s shilling for Republicans is no longer surprising after all these years, but it remains just as ineffectual. Even Fox News legal analysts Andy McCarthy and Andrew Napolitano termed Turley’s take “simply wrong.”

At the end of the day, it seemed possible to glean a broad outline of articles of impeachment from the Democrats’ lines of questioning. But first, some background. When House Speaker Nancy Pelosi handed control of the impeachment inquiry to Intelligence Committee Chair Adam Schiff, some on the left saw it at least partly as an ideological move—giving a trusted center-left Pelosi ally command of the fractious impeachment debate, temporarily sidelining the more liberal Judiciary Committee led by Jerry Nadler. It also seemed a sign that Pelosi wanted the inquiry limited to the details of Donald Trump’s Ukraine extortion attempt, and shorn of the messy but obvious wrongdoing outlined in Robert Mueller’s 400-plus page report, or in Trump’s multiple violations of the foreign and domestic emoluments clauses, or his routine abuses of power, especially usurping congressional power.

But now the action is back with the large and ideologically fractious House Judiciary Committee, home to smart and fiery congressional progressives, including Jamie Raskin, Pramila Jayapal and David Ciccilline, as well as wing nut showboats like Louie Gohmert, Matt Gaetz, and Jim Jordan. It’s Judiciary that has the responsibility to craft and vote out articles of impeachment against a president who Raskin termed “a one-man crime wave” in a meeting with The Nation this week.

From the questioning by Raskin, Jayapal, and others, we could see hints of what articles of impeachment against that one-man crime wave might include. Clearly, they will zero in on the abuses of power and even bribery in the Ukrainian arms-for-political-dirt scandal. It also seems possible they’ll include obstruction-of-justice charges based on Trump’s attempt to interfere with the Robert Mueller investigation, even though moderate first-term members continue to insist that they want to avoid the complexity of the Mueller probe.

They also appeared ready to make good on a promise by Adam Schiff to charge Trump with obstruction of Congress, for refusing to allow aides to testify, even under subpoena, and to provide the official records requested from the State Department and the Office of Management and Budget that might illuminate what really went on with Ukranian military aid.

The hearing wasn’t perfect; Republicans on the committee tried from the start to knock Nadler off his game. Thankfully, Nadler vowed not to “take any shit” and instead took a page from Schiff’s controlled hearings and gaveled down some early GOP motions. But ranking member Representative Doug Collins still brought the crazy, and he brought it loud. Karlan joined a growing feminist impeachment pantheon that includes State Department veterans Fiona Hill and Maria Yovanovich, when she blistered Collins for his assertion that the witnesses hadn’t paid attention to the prior hearings, insisting, “I read all of the depositions. I’m insulted by the notion that I don’t care about these facts.”

“History will shine a bright light on us,” he shouted. We can only hope he’s right.