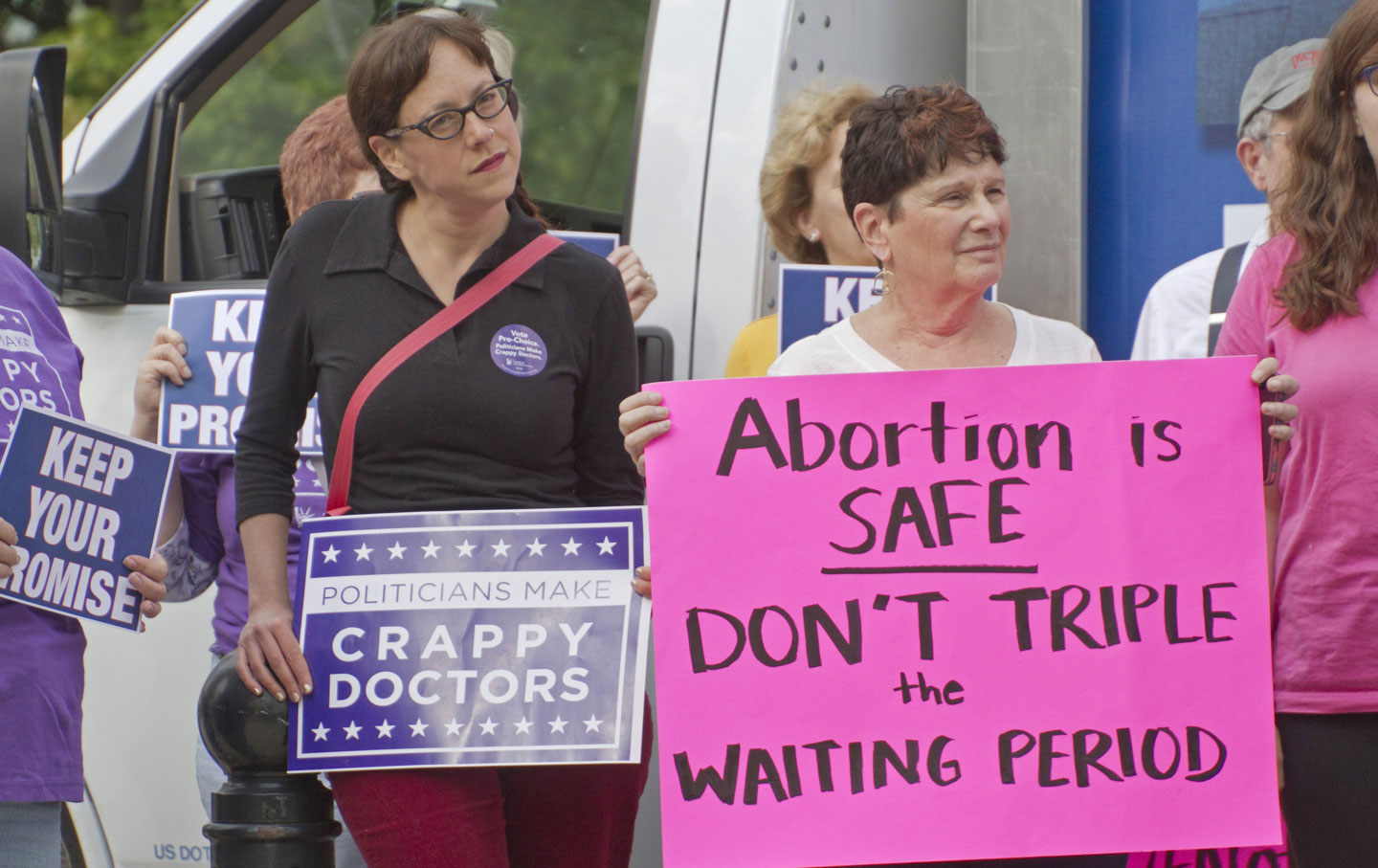 Ross Douthat, the New York Times columnist and anti-choice conservative Catholic, has responded at some length on his blog (parts one and two) to my postelection column, in which I posed some pointed questions for pro-lifers. My format gives me much less space, but I’m going to try to take up his major points here. Then we can move on, which most of you have probably already done.

1) Illegal abortion. What would happen if the United States made abortion a crime? Experts cite very high rates of unsafe clandestine procedures in parts of the world where abortion is banned, but Douthat dismissed my example of Brazil—where, despite a virtually total ban, the abortion rate is higher than in the United States, and more than 200,000 women end up in the hospital each year—on the grounds that it’s in the developing world. I’m not sure that makes Brazil irrelevant. There are places in the United States where poverty is rampant and healthcare for the poor inadequate—large swaths of Texas and the Deep South, for example.

But OK, forget Brazil. Douthat likens Ireland—a country with low abortion rates and a ban so strict that women must travel outside the country to end a pregnancy, unless it’s absolutely sure to kill them—to its neighbor, the United Kingdom, where abortion is legal and widely practiced except in North Ireland. Ergo, bans work. But how similar are these nations? The UK is large, industrialized, urban, multiethnic, and one of the most secularized countries in the world, while Ireland is tiny, homogeneous, deeply shaped by a long history of colonialism, poverty, rural traditions, and the pervasive patriarchal power of the Roman Catholic Church. Moreover, as the recent referendum approving same-sex marriage showed, Ireland is changing fast. Its people are wealthier, better educated, and more cosmopolitan; and, as elsewhere, sexual scandals and their cover-ups have weakened the moral authority of the church. The use of contraception is widespread; emergency contraception can be purchased without a prescription; and an unknown but not trivial number of women obtain abortion pills through pro-choice networks. To Douthat, it may look as if the ban works reasonably well, but the Irish don’t seem to think so: Polls show majority support for liberalizing abortion laws, even among Mass-attending farmers. If pro-choice advocates succeed in putting a referendum on the ballot to overturn the constitutional ban on abortion, chances are good that it will pass. I doubt that, in a decade or two from now, Irish women will be risking 14 years in prison for taking a pill that is available online and legal almost everywhere else in Europe.

The states that refused the Medicaid expansion are almost all controlled by anti-choice legislatures and governors.

Douthat’s second point is that illegal abortion, under US (not Brazilian) conditions, would be fairly safe. He points out that when abortion was still a crime here, the death rate went way down well before Roe. Three points about that. First, the death rate went down because of antibiotics, which doctors, who performed a large share of illegal abortions, could prescribe. But Douthat says he wants to put doctors in prison! Pre-Roe, that rarely happened. But an America that banned abortion now would be one with a triumphant anti-abortion movement unlikely to accept the old tacit bargain in which abortion was quietly tolerated most of the time.

Second, death rates do not measure all of the harms of illegal abortion, which also include infection, injury, lack of follow-up care, being forced to testify in court against the provider, humiliation, fear, and the bad things that can happen when someone knows you have no legal recourse because you’re committing a crime together, such as being molested or compelled to pay far more money than you agreed. How would Douthat like to have a surgical procedure done in a motel room—to which he was driven blindfolded?

Third, an abortion ban would weigh most heavily on low-income women—as it did before Roe. Women with money could often (but not always) find a quality provider, here or abroad. I’ve gotten letters from women who went to Puerto Rico or Cuba and fondly remember the excellent care they received. Once abortion was legalized in New York State in 1970, only women who couldn’t afford to travel there were at risk of harm. (Indeed, the disparate impact of strict abortion laws on poor women of color was one of the arguments in favor of legalization.) But the class- and race-based cruelty of abortion bans doesn’t seem to bother Douthat, who writes: “The reality is that the pro-life side does accept, must accept, that abortion restrictions will lead to some tragic cases, some illegal abortions that accidentally kill the women who obtain them. But I think the evidence I’ve just cited offers good reasons to believe that these tragedies need not be nearly as inevitable and pervasive as the pro-choice side assumes.” Well, OK then. I’ll just let the gelid complacency of that answer stand on its own.

How would Douthat like to have a surgical procedure in a motel room—to which he was driven blindfolded?

2) Birth control. Contrary to the World Health Organization and a great deal of human experience, Douthat argues that birth control does not prevent abortion, citing Megan McArdle, who claims that states with “liberal attitudes about birth control seem to have the highest, not the lowest, rates of abortion.” In fact, numerous socially conservative states have high abortion rates: Georgia, Kansas, Tennessee. In any case, this metric is way too blunt. How much quality sex ed and attentive, individualized reproductive healthcare does a poor woman get, even in a state friendly to contraception? How much sexual agency does she have? How chaotic is her life? And is it a victory if women in states unfriendly to both contraception and abortion have unplanned, unwanted babies? Is that the country we want?

Unlike a lot of anti-choicers (to say nothing of abstinence-only sex-ed curricula), Douthat doesn’t argue that birth control doesn’t work—but he doesn’t recognize its significance, either. The fact that birth control (including abortion) is a critical factor behind the influx of women into higher education and the workforce interests him not at all. (And birth control works pretty well: According to a Gutt­macher Institute study, the two-thirds of women who use it carefully and consistently account for only 5 percent of unintended pregnancies.) Still, I suppose it’s a win for pro-choicers that he would permit “the public provision of non-abortifacient contraceptives”—but (sigh) only as part of a “bargain that also further restricts abortion.” He also admits to “ongoing moral uncertainty about emergency contraception and IUDs.” Note to Douthat: Even Ireland permits those.

3) Poverty. Douthat says that pro-choicers underrate how much help abortion opponents offer to poor women and children. Maybe so, but it’s obviously insufficient, since poverty is all around us, and 73 percent of women who seek abortions say they can’t afford a baby now. Moreover, the political wing of the anti-choice movement has thrown in its lot with the conservative wing of the Republican Party, which has cut every social benefit it can. The 20 states that have refused Medicaid expansion under the Affordable Care Act are almost all controlled by anti-choice legislatures and Republican governors. Douthat suggests various policy proposals to help poor women, mostly in the form of tax credits. Welcome as a bigger earned-income or child tax credit would be, he doesn’t begin to grasp the situation of someone with a crisis pregnancy: Can she stay in school? Can she keep her job? What about housing? The man? Her other children? (Sixty percent of women who choose abortion are already mothers.) Centrist tinkering with policy doesn’t begin to address the complexities of women’s lives. After all, you only get a tax credit if you already have a job.

I myself do not believe that poverty is the only reason most low-income women who have abortions choose to do so. Middle-class and wealthy women have abortions, too. Having a child affects every aspect of a woman’s life, not just her pocketbook: her prospects, her relationships, her family, her dreams and ambitions, her physical and psychological well-being. We should get rid of poverty to make people’s lives better, not to justify more forced births. We should ban job discrimination against pregnant women and mothers, too—something abortion opponents rarely discuss. Low-income women are much more likely to have unplanned pregnancies, though, and that is something we can fix. We should provide birth control to all—not as a grudging trade-off against abortion rights, but to give girls and women more freedom to shape their lives.

I wish I felt Douthat cared about that freedom.

On the web, I’ll reply to Douthat’s other arguments, including that legal abortion and birth control aren’t prerequisites for women’s equality. Irish feminists beg to differ.