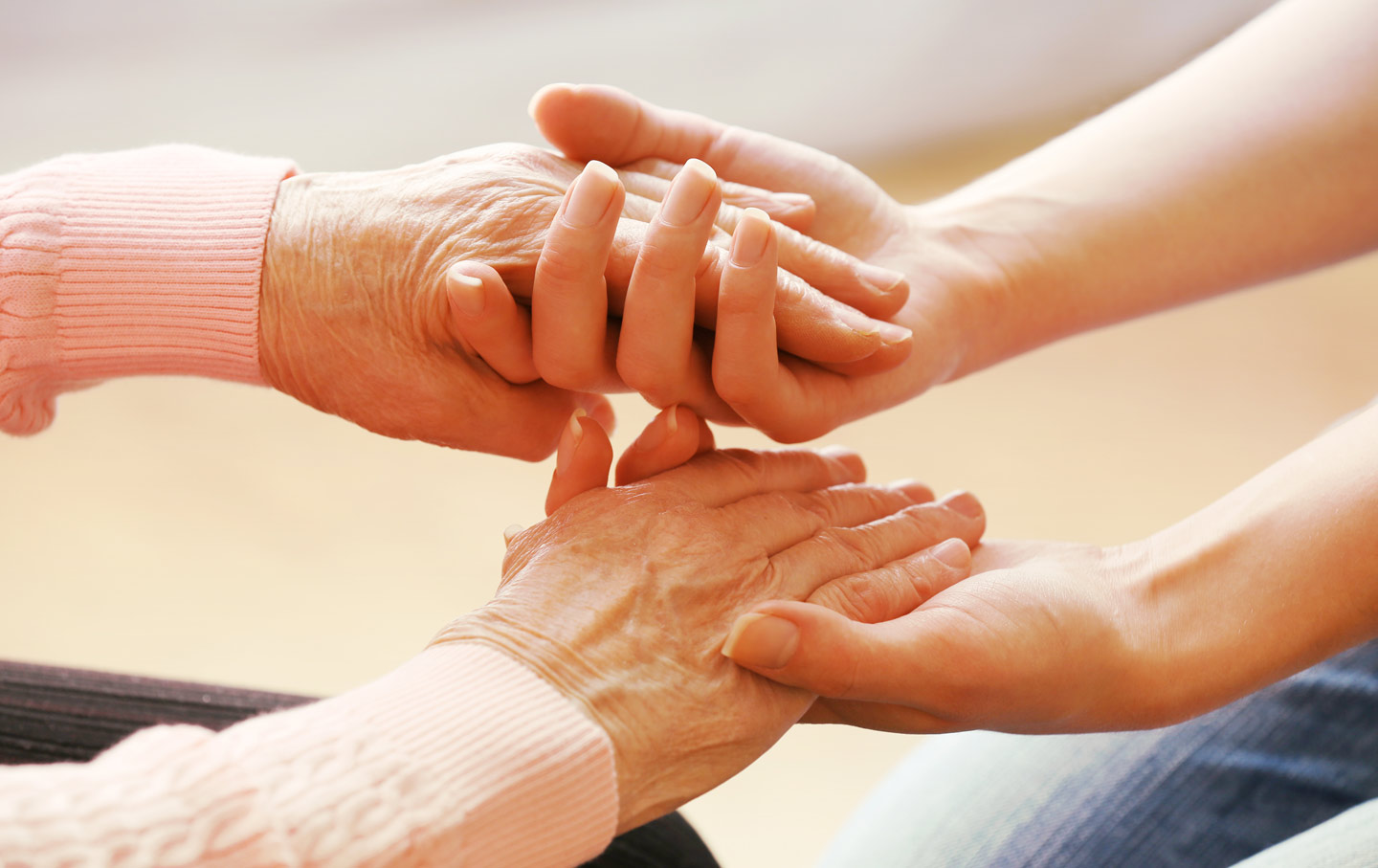 The country is working harder and getting older, and our economy refuses to give us a break. Since an estimated 27 million individuals in the US will need some form of long-term care by 2050, every day stretches working people to spend more energy and time helping elders cope with health hardships, do day-to-day chores, or just stay connected to their communities. But in an increasingly precarious economy, this delicate labor of senior and disability care often brings chaos into workers’ lives, and, according to researchers, the social “safety net” offers scant relief for workers or families.

Policies that give workers paid leave time are taking hold in many states. But many workers are shouldering most of the burden of family caregiving on their own, unpaid, and many are not able to hold down a job simultaneously. For those workers, unemployment insurance (UI) benefits are all they have to scrape by after leaving their jobs, and often, it’s denied to them.

According to researchers with the National Employment Law Project (NELP), AARP and the Center for Law and Social Policy (CLASP), these caregivers are in a bind: they can’t work full time and care full time, and they need to choose between earning a living and unpaid caregiving. Many people simply quit the workforce altogether to devote themselves to unpaid caregiving. In many states, they should be eligible for some kind of unemployment insurance. While UI is generally reserved for people involuntarily pushed out of work, caregivers are eligible for narrow exceptions in about half of states. But even with those exceptions, families are often excluded through an overly stringent claims process. They then struggle to provide care without the modest income subsidy (generally up to around half of one’s previous income) that laid-off workers may automatically get.

The researchers found that nationwide, “a combination of outmoded rules and lack of public outreach,” as well as inconsistent implementation of existing rules, had created massive barriers to claiming earned insurance benefits that people need and deserve.

These restrictions are another sign that social policies haven’t yet caught up to the “graying” of America or the everyday needs of the so-called “sandwich generation”—squeezed economic pressures of family rearing, and of caring for aging parents. According to the Family Caregiving Alliance, “More than one in six Americans working full or part time report assisting with the care of an elderly or disabled family member, relative, or friend. Caregivers working at least 15 hours per week said it significantly affected their worklife.”

Caregivers face multiple obstacles in seeking access to UI: they may voluntarily quit (after grandma moves in from the hospital), and have to prove their eligibility for the narrow exceptions for people who voluntarily leave work rather than get involuntarily dismissed. They may also be denied for being forced out of the job “for misconduct” (because tending to grandma led to the caregiver’s repeated lateness for work). They may fail to meet requirements for “availability to work” (because a loved one’s doctor’s appointments prevents her from seeking full-time work). One agent interviewed for the report discussed a case in which a worker was first “fired for missing too much work after she had to travel to a hospital out of town with her daughter for medical procedures,” and then, due to the same onerous travel duties, was “denied UI benefits for failure to meet the availability rules.”

According to the report, even in states that do make exceptions for caregivers, applicants are prone to being denied. Sometimes a benefits agent might unfairly deny a claim because the agency assumes (displaying an ingrained mistrust of workers) that claimants simply haven’t tried hard enough to seek an accommodation at work before quitting. Advocates for caregivers argue that UI applicants often face too strict a standard for proving that they quit for “good cause,” since caring for loved ones is apparently frequently deemed to be not “good” enough.

And although about half of states, including Arizona, California, and Illinois, recognize “compelling family circumstances” for UI claimants, many caregivers seem unaware they may qualify and don’t bother applying.

NELP and CLASP recommend that states ease their UI eligibility standards and reform standards for assessing work availability, in recognition of the time constraints caregivers face—for example by requiring caregivers to be available for part-time, rather than full-time work if they must balance caregiving with a regular job.

Though UI payments are generally modest, they might foster the kind of economic security for working-class households that could also indirectly benefit the paid care workforce, as well. Since more than one-third of households employ outside assistance, when caregiving workers are more economically secure, that helps support domestic workers or home health aides, who in turn help free up caregivers’ for out-of-home paid jobs.

And there are more reasonable ways of dealing with care work. Some lawmakers are pushing for state family leave insurance programs specifically designed to support caregiving. California’s unique family leave insurance system typically enables people to claim up to six weeks of paid time off. Some workers can use that after leaving a job and before formally reentering the workforce. Then, once things stabilize at home, they can begin a job search in earnest and qualify for UI.

California’s system provides a deeper “web” of caregiving that follows a caregiver through different phases of their work life. In other states, however, UI remains a sole lifeline for many.

According to the report’s co-author Elizabeth Ben-Ishai of CLASP, “Even with broader access to paid leave, the UI system is an important safety net for workers who lose their jobs, and there are still scenarios where this could happen even with paid leave.”

At the intersection of elder care and social welfare, the social infrastructure needs a fundamental rebalancing, not only between work and home, but across generations as well—recentering the concept of “work-life balance” around the family, not just the workplace. The right to care is a labor right, too, and no one should be forced to quit their livelihoods just to care for loved ones.