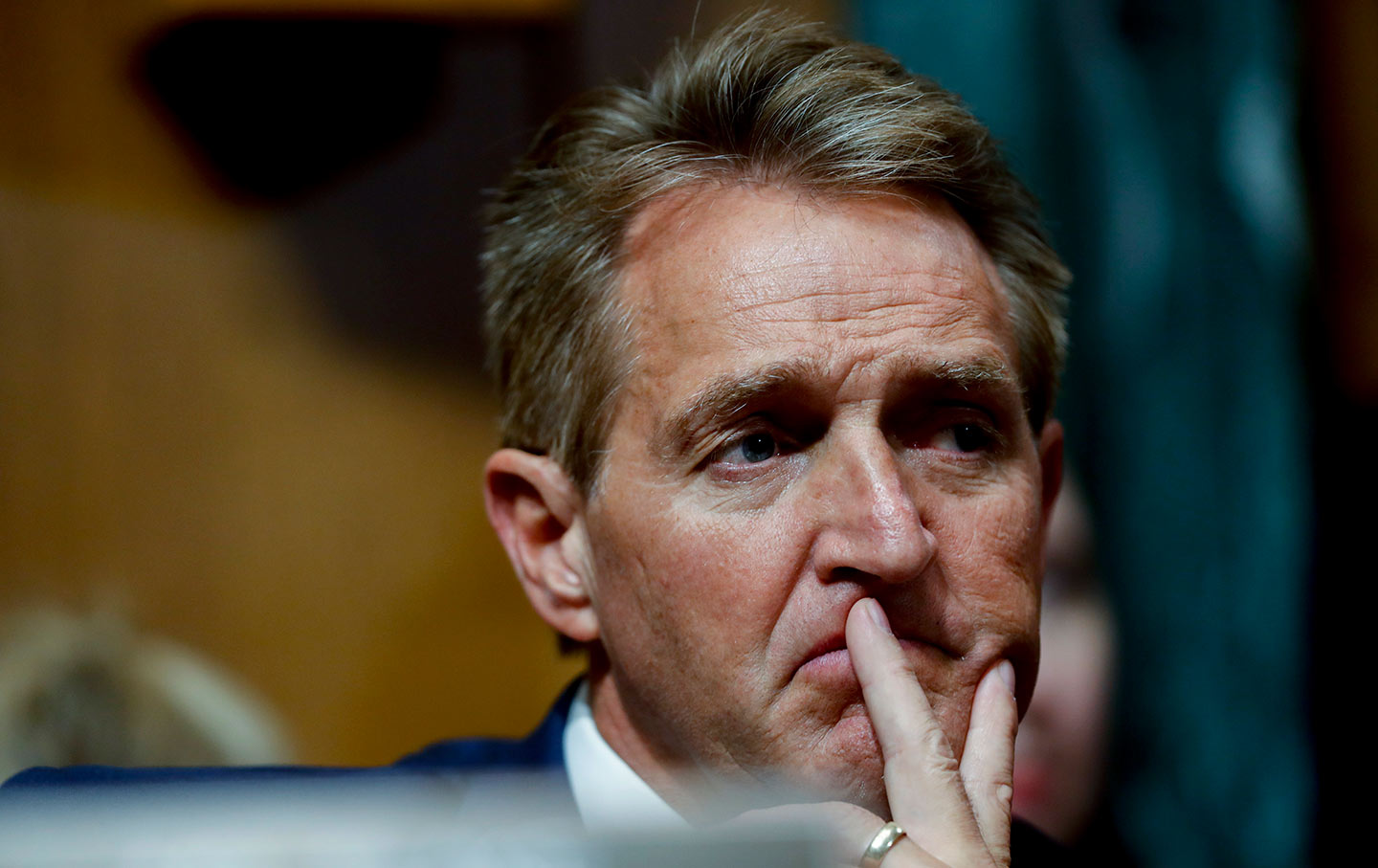 Arizona Senator Jeff Flake appeared on 60 Minutes Sunday evening and settled the question of whether Judge Brett Kavanaugh’s nomination to serve on the Supreme Court should be rejected. The Republican, who last week used his critical position on the Senate Judiciary Committee to secure an ill-defined, one-week FBI investigation into allegations of sexual assault against Kavanaugh, was asked by CBS News’ Scott Pelley: “If Judge Kavanaugh is shown to have lied to the committee, nomination’s over?”

Flake’s colleague, Delaware Democrat Chris Coons, echoed the sentiment: “I would think so.” That should settle the matter, because Kavanaugh has been shown to have lied to the committee.

No matter what the FBI turns up with regard to the nominee’s denials last week of allegations that were detailed in powerful testimony from Dr. Christine Blasey Ford—the research psychologist who told the Senate she was “100 percent” certain that Kavanaugh sexually assaulted her—and no matter what is turned up with regard to other assault allegations that he has denied, the Senate already has overwhelming evidence of what former Judiciary Committee member Russ Feingold refers to as “the nominee’s disturbing willingness to avoid the truth.”

Feingold, a former Democratic senator from Wisconsin who was highly regarded for his fairness and commitment to bipartisanship, has focused attention on the fact that there is now “clear evidence showing that Kavanaugh lied under oath during the 2006 confirmation hearing for his spot on the US Court of Appeals for the DC Circuit.”

Feingold recalls questioning Kavanaugh during that hearing about the role the nominee had played in advancing the Bush administration’s judicial nominees. In particular, the Democratic senator from Wisconsin inquired about Kavanaugh’s handling of the controversial nomination of Charles Pickering Sr. to serve on the Fifth Circuit. Kavanaugh feigned ignorance, claiming that “This was not one of the judicial nominees that I was primarily handling.”

In fact, as Feingold has noted in a Huffington Post essay, “newly released emails show that Kavanaugh appeared to be the primary person handling Pickering’s nomination, at least by 2003, and was heavily involved in pushing for his confirmation as early as March 2002. There are emails showing that Kavanaugh coordinated meetings with and about Pickering; that he drafted remarks, letters to people on the Hill and at least one op-ed for then-White House Counsel Alberto Gonzales about Pickering; that he advised Gonzales on Pickering strategy; and much more.”

Feingold is not alone in expressing concern about Kavanaugh’s pattern of lying to the committee. The senior member of the chamber, Vermont Democrat Patrick Leahy, has said that

I have never been more concerned about a Supreme Court nominee’s basic willingness and unwillingness to be truthful under oath. Judge Kavanaugh repeatedly testified that during his time in the Bush White House, he never had reason to believe he was benefiting from information that had been stolen from Democrats. But he repeatedly received information clearly marked “highly confidential” and even one e-mail with the subject: “spying,” this from a Republican aide behind one of the biggest thefts in Senate history. A scandal in which Republican aides on the Senate Judiciary Committee stole 4,670 files from six Democratic senators, including myself. Documents show that his testimony was almost certainly false.

We watched the testimony of Judge Brett Kavanaugh before the Senate Judiciary Committee with dismay and disbelief. His many misleading and false statements cast serious doubt on whether he should be confirmed to a seat on the US Supreme Court. The events of this weekend only make it clearer the Senate must not act in haste. At the very least, the Senate should not vote on his nomination until still-secret documents from his time in the George W. Bush White House are made public and until the sexual misconduct allegations that have just become public are thoroughly investigated.

This is not about the dance many nominees attempt in order to avoid expressing an opinion on legal issues they might face on the court. It is about a pattern of deceptive answers on a range of questions about his past activities and agenda to change our laws through the courts. We believe this deception, both earlier this month and in his 2004 and 2006 nomination hearings for the DC Circuit, was intentional. His truthfulness, of course, is very much at issue in the latest allegations against him, since he has categorically denied the sexual assault of which he is accused.

The FBI inquiry that is conducted this week is a high-stakes and important intervention. If it can be conducted without interference from the White House, if it can be completed in the narrow time frame that has been permitted, it could resolve vital questions regarding Kavanaugh’s past. Or, as Flake suggested in Sunday’s 60 Minutes interview, there’s a chance that some of those questions will remain unresolved.

The Senate has a duty to consider the information that the FBI presents this week.

However, if the standard for opposing the confirmation of Brett Kavanaugh is that he has been “shown to have lied to the committee,” then it has already been met.