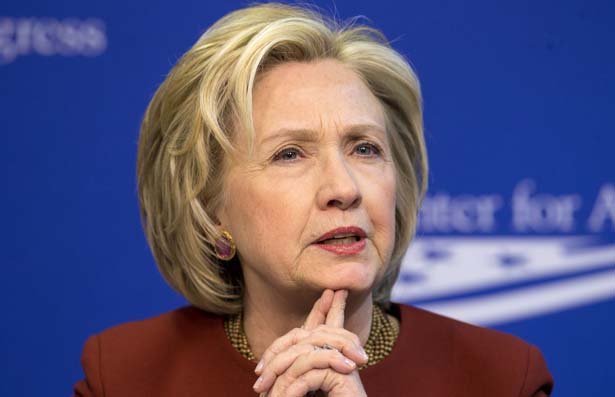 But Clinton has a chance to get trade policy right when it matters.

And when it matters is now.

As she launches a 2016 presidential campaign in which she seems to be interested in grabbing the banner of economic populism—going so far as to complain in her announcement video about how “the deck is still stacked in favor of those at the top”—Clinton can and should stake out a clear position in opposition to granting President Obama Trade Promotion Authority to negotiate a sweeping Trans-Pacific Partnership.

Despite overwhelming opposition from labor, farm, environmental, and social-justice groups, Congress is preparing to consider whether to provide Obama with the “fast track” authority he seeks to construct a “free trade” deal linking the North American and Asian nations of the Pacific Rim. Imagine the North American Free Trade Agreement on steroids and you get a sense of what is at stake. Yet, so far, Clinton’s office has offered only a statement about how she is “watching closely” as the debate evolves and a suggestion that she wants “greater prosperity and security for American families, not trade for trade’s sake.”

That’s not a clear commitment one way or the other on fast track or the TPP. And the coming congressional debate demands clear commitments not just from members of the House and Senate but from those who seek the presidency.

In many senses, it is remarkable that Congress would even consider surrendering its authority to make amendments, to provide oversight, and to check and balance the executive branch on so vital an economic and social issue. Yet, the legislation has now been introduced and the White House and corporate interests are gearing up a massive campaign on behalf of fast track. If it succeeds, the TPP will be negotiated behind closed doors and with inadequate oversight from Congress.

No matter what anyone thinks about “free trade,” as it is currently arranged to benefit multinational corporations that seek a race-to-the-bottom economics, or “fair trade,” as it should be arranged to protect workers, the environment, and human rights, no one who believes in openness, transparency and democracy should be on the fence regarding fast track .

The practical arguments against “fast track” are clear enough. As Congressman Mark Pocan, a Wisconsin Democrat who serves as vice chair of the Congressional Progressive Caucus, says: “[Americans] have seen these type of ‘free trade’ deals rushed through Washington before, and we saw the results firsthand: closed factories, depleted industries and lost jobs. We cannot make the same mistakes of the past. If the administration wants to get the approval of Congress for this new agreement, we must take the time to conduct the careful and thorough oversight this measure requires.”

The political arguments against fast track are, if anything, even clearer. Mark Perrone, the new president of the United Food and Commercial Workers union, explains that “no elected official, regardless of political party, who is truly interested in making the economy better and fairer, can responsibly support the TPP. Simply put, this trade deal, like so many others, is bad for our workers, families, and shared future. In the end, while we may not be able to change every mind, we will remember those elected officials who stood with America’s workers by voting for jobs and against another destructive trade deal. More to the point, we join with the AFL-CIO and other unions that refuse to support any member of Congress that decides to put narrow self-interests above the interests of hard-working families.”

So far, Clinton cannot be counted as a supporter of fast track, or as a foe. The statement emailed from a Clinton spokesman to media outlets says that she is “watching closely to see what is being done to crack down on currency manipulation, improve labor rights, protect the environment and health, promote transparency, and open new opportunities for our small businesses to export overseas.” More generally, it explains, “Hillary Clinton believes that any new trade measure has to pass two tests: First, it should put us in a position to protect American workers, raise wages and create more good jobs at home. Second, it must also strengthen our national security. We should be willing to walk away from any outcome that falls short of these tests.”

That’s good language, as is the reminder from her office that Clinton believes “we shouldn’t be giving special rights to corporations at the expense of workers and consumers.” But none of this amounts to a statement of opposition to fast track or the TPP.

Critics of the deal are pushing for specifics.

On the day after the fast-track legislation was proposed in Congress, one of the most outspoken opponents of NAFTA-style trade policies called on Clinton and other 2016 contenders to state their opposition. “My strong hope is that Secretary Clinton and all candidates, Republicans and Democrats, will make it clear that the Trans-Pacific Partnership should be rejected and that we must develop trade policies that benefit working families, not just Wall Street and multi-national corporations,” said Vermont Senator Bernie Sanders, who has been exploring the prospect of challenging Clinton for the Democratic nomination. Framing his call in the language of economic populism that Clinton has sought to echo, Sanders argued that a strong stance by candidates was necessary because, “For decades, corporate America has been pushing disastrous trade agreements on the American people. The result: millions of jobs lost through outsourcing, lower wages and the collapse of our middle class.”

Former labor secretary Robert Reich presumes that Clinton is in a tight spot. As Obama’s Secretary of State she talked up trade deals, including the TPP initiative. As a senator, she backed some and opposed others. Reich says the question of whether to stick with Obama or to oppose his fast-track request “could definitely be a headache for her in 2016 because it is so very unpopular among progressives.”

Democracy for America’s Jim Dean summed up the centrality of the fast-track debate when he said, “Like a vote for the Iraq War or statements of support for the Social Security–cutting Bowles-Simpson plan, a vote for fast track and the TPP will never be forgotten…”

Presumably, that goes for the positions taken by candidates, as well.

Clinton should make one. Instead of sticking with Obama on this issue (or, worse yet, trying to avoid taking a stance), she should stick with principles she embraced as a senator. In 2002, sheopposed granting President Bush fast-track authority. And, as a candidate for the 2008 Democratic presidential nomination, she won states such as Ohio and Pennsylvania at least in part because she declared that “The United States should be pursuing trade agreements that promote human rights and worker rights, not overlook egregious abuses.”

Notably, when she spoke to United Auto Workers members during that campaign, Clinton said, “Every trade agreement has to be independently, objectively analyzed.”

The first place in which trade agreements must be independently and objectively analyzed is in Congress—before they are adopted. Clinton can and should state this truth, as she makes the hard choice to oppose the president she once served and side with the Democrats she proposes to lead.

There is plenty of skepticism about Hillary Clinton’s much-discussed but at this point scantly articulated embrace of economic populism. She can address at least some of that skepticism right now, at the start of her 2016 campaign, by opposing fast track.