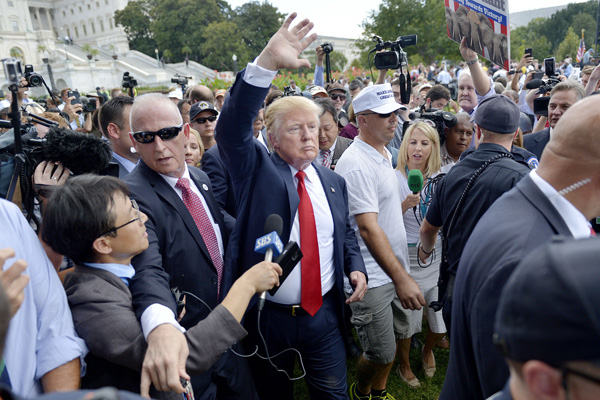 Donald Trump’s victory in the 2016 presidential race has more than domestic implications. The Middle East has been a major focus of US policy-making in the post–Cold War period. George W. Bush arguably engaged with it more than any other part of the world. Despite Barack Obama’s desire to rebalance toward East Asia, he was repeatedly pulled back into the Middle East by the 2011 youth revolutions and their aftermath, and by the rise of ISIL in Iraq and Syria. What impact will Trump’s policies have on the region?1

One difficulty in answering this question lies in the quixotic character of Trump himself. He has often taken both sides of a controversial question. For instance, he criticized his predecessors for becoming too entangled in the Middle East, then at one point last March suggested sending in a division (20,000-30,000) of US troops to fight ISIL. As it happens, ISIL as a territorial state could already have been defeated by the time he takes office. Another question is whether, given his erratic statements and behavior, Trump’s cabinet and the permanent Washington bureaucracy (the “deep state”) will actually let him change the direction of US foreign policy radically. But let us assume for the sake of argument that where he repeatedly voiced a sentiment, he will have a policy bias toward it, and that he may actually be allowed to implement it.2

Trump has said that the Iraq and Libya interventions were a mistake, and that he would prefer to leave Bashar al-Assad alone in Damascus. He has also repeatedly urged that the United States collaborate with the Russian Federation against ISIL in Syria. If he follows through on these sentiments, then he could pull CIA support for the 30 or so “vetted” rebel militias it now supports in Syria, who are trying to overthrow the Baath regime of Assad.3

Many of these Syrian militias are fundamentalist in character, and some have occasionally formed battlefield alliances of convenience with the Al Qaeda affiliate in Syria, which now styles itself the Levantine Conquest Front. The LCF is a prime target of Russian president Vladimir Putin (much more so than ISIL is), and Moscow tends to view all the fundamentalist rebel groups as “terrorists.” It is possible that the Trump administration will adopt this Russian definition and will turn on the vetted groups. Since the CIA allegedly uses Saudi Arabia for pass-through purposes in funding and supplying the fundamentalist rebels, any such abandonment of them by Trump is certain to create frictions with Riyadh.4

Trump might abandon Syrian rebels now aided by the CIA—which would please Russia but infuriate US allies in the Gulf.

The Saudi monarchy and its allies in the Gulf Cooperation Council will view a Trump administration capitulation to Putin in Syria and a hands-off policy toward Damascus as, de facto, acquiescence in Iranian dominance of Syria and Lebanon. This outcome may not be Trump’s actual goal, but it would be a side effect of forwarding Syrian policy to Moscow, since Russia and Iran both want to keep Assad in power. This stance, as well, will raise hackles in the GCC, the members of which already feel that Barack Obama has abandoned them in seeking a rapprochement with Iran. Further, Trump’s threat to revoke the American security umbrella over Saudi Arabia, the United Arab Emirates, Kuwait, Qatar, and Oman unless they actually pay for it has already provoked a good deal of anxiety. They may respond by diversifying their security relationships. Saudi Arabia has already opened up lines to China and recently for the first time held joint military exercises with that country.5

Turkey’s increasingly authoritarian president Recep Tayyip Erdogan, who supports the fundamentalist militias in Syria as well, will also feel left in the lurch by a Trump-Putin sweetheart deal over Syria. For the moment, however, he appears to have backed off his earlier threat to deny the Trump administration access to the Incirlik air base, which is key to the US campaign against ISIL.6

Trump’s vow to kill the Iran nuke deal would alienate not only Tehran but European allies who helped negotiate it.

On the other hand, Trump’s determination to cancel the Joint Comprehensive Plan of Action (JCPOA), which limits Iran’s nuclear program to purely civilian activities in return for sanctions relief, might please the Arab Gulf oil monarchies—if he follows through on it. Iranian Foreign Minister Mohammad Javad Zarif urged the new administration to stick to the deal. However, Iran’s clerical leader, Ali Khamenei, who is ambivalent about the agreement, said it was fine with him if the United States wanted to cancel it. The likelihood of a successful renegotiation of the JCPOA seems low, and it is unclear what more Iran could give up. It has already mothballed its heavy-water reactor at Arak, submitted to snap UN inspections, reduced its stockpiles of low enriched uranium, and vastly reduced the number of centrifuges it operates.7

It is highly unlikely that US sanctions alone could bring Iran back to the negotiating table, and even more unlikely that America’s partners in Europe would be willing to give up prospective Iran investments to join in a new round of sanctions for the sake of a supposed “better deal.” European reluctance will be redoubled by Trump’s own encouragement of them to go their own way and dissolve US-led multilateral organizations such as NATO.8

French petroleum giant Total S.A. has already decided to finance an Iran gas project with euros rather than dollars and to accept payment from Iran in barter (in gas concentrates, which it will sell on the world market). The project, now legal in international law despite continued US sanctions, may continue to be viewed as illicit by the US Treasury Department, especially in a Trump administration. But if no US resources are used, Treasury’s Office of Foreign Assets Control has no basis for fining Total. A diplomatic crisis between a Trump administration determined to pressure Iran into an even more stringent nuclear deal and a European Union on the lookout for new profit centers like Iran could roil relations between Washington and its traditional allies. Likewise, it is hard to see how Putin, Trump’s proposed security partner for the Middle East, would approve of reneging on the JCPOA, which his government helped negotiate.9

Trump policy as so far announced contains significant contradictions. To leave Assad in power in Syria is to acquiesce in continued Iranian power in the Levant. To revoke the nuclear deal with Iran, however, will constitute an attempt to blockade and isolate that country financially. Such an attempt, would, however be very difficult to pull off, since the rest of the world will balk at suffering economic losses for the sake of what they will see as a whim. Further, Russia, with which Trump wishes to partner in Syria, would surely oppose any alteration to the JCPOA, given Moscow’s alliance of convenience with Tehran. Insisting that the GCC provide ground troops to fight ISIL or else buy out their military service is sure to anger these major oil producers. Both of these policies, toward Iran and toward Saudi Arabia, will cause severe tensions in an already very tense region.10