On April 25, the Supreme Court heard its final argument for the current term—fittingly, in Trump v. Hawaii, the challenge to President Trump’s so-called “Muslim ban.” That case will provide the first direct Supreme Court test of this administration’s excesses. But it is only one of the many blockbuster cases still to be decided this term—in nearly all of which the administration has urged the Court to adopt radical positions, overruling or disregarding precedent to further the White House’s political ends. By the end of June, when it recesses for the summer, we will have a much better sense of whether the newly reconstituted Roberts Court, joined by Neil Gorsuch last term, will prove a brake on the president, or an aider and abettor in his radical schemes. (Disclaimer: The ACLU, where I serve as national legal director, is counsel in several of the cases discussed here and has filed friend-of-the-court briefs in most of the others.)1

In the Muslim-ban case, the administration argues that the Court should simply ignore abundant evidence that Trump intended to ban Muslims by using nations as proxies for religion. This argument breaks from precedent instructing that, in assessing whether the government has violated the establishment clause by favoring or disfavoring a particular religion, judges must review all “publicly available evidence” and cannot “turn a blind eye to the context in which [the] policy arose.” Solicitor General Noel Francisco sought to close his oral argument with a flourish by claiming that Trump had been “crystal-clear…that he had no intention of imposing the Muslim ban.” But the opposite is true, and the following week Trump insisted, yet again, that he would not apologize for the ban. To side with the president and uphold an unprecedented bar to entry for 150 million people, virtually all of them Muslim, would mark a radical and disturbing departure from the Court’s establishment-clause precedent.2

In Carpenter v. United States, the Trump administration’s position would mark the end of privacy in the digital age. The specific dispute concerns whether the government needs a warrant to obtain records of the cell towers that an individual’s phone connected to over the course of several months. The data allows the government to construct a map of everywhere an individual traveled 24/7 as long as he or she was carrying the phone. The administration argues that because we “voluntarily” give this information to our cell-phone service providers when we use a phone, there is no Fourth Amendment protection for it. By that reasoning, all information shared digitally—including e-mails, Web searches, and the Internet sites one reads or views—would become an open book for the government. It would end privacy as we have known it for the past 200 years.3

In Masterpiece Cakeshop v. Colorado Civil Rights Commission, the Trump administration yet again broke with precedent to further its political agenda. Never before in its history has the Justice Department supported a constitutional exemption from a nondiscrimination statute. One of the department’s principal responsibilities is to enforce civil-rights laws, and it has always opposed arguments that businesses have a constitutional right to discriminate. But not this time. The Trump administration filed a brief arguing that bakers should have a First Amendment right to refuse to make a cake for a same-sex wedding, even if they would make the same cake for an opposite-sex wedding.4

The fate of public-sector unions is in the Court’s hands this term as well, and again the Trump administration has urged it to depart from precedent. The Court is considering a First Amendment challenge to a law common in many states that requires workers who are not members of a union to pay fees to cover the services that the union must provide by law to all employees, such as collective bargaining and the processing of grievances. More than 40 years ago, the Court upheld such fees as long as they were not used for political advocacy. The First Amendment, the Court reasoned, does not give non-members the right to impose the cost of services they receive on others. But Trump has asked the Court to overrule that precedent and deal what could be a fatal blow to public-sector unions.5 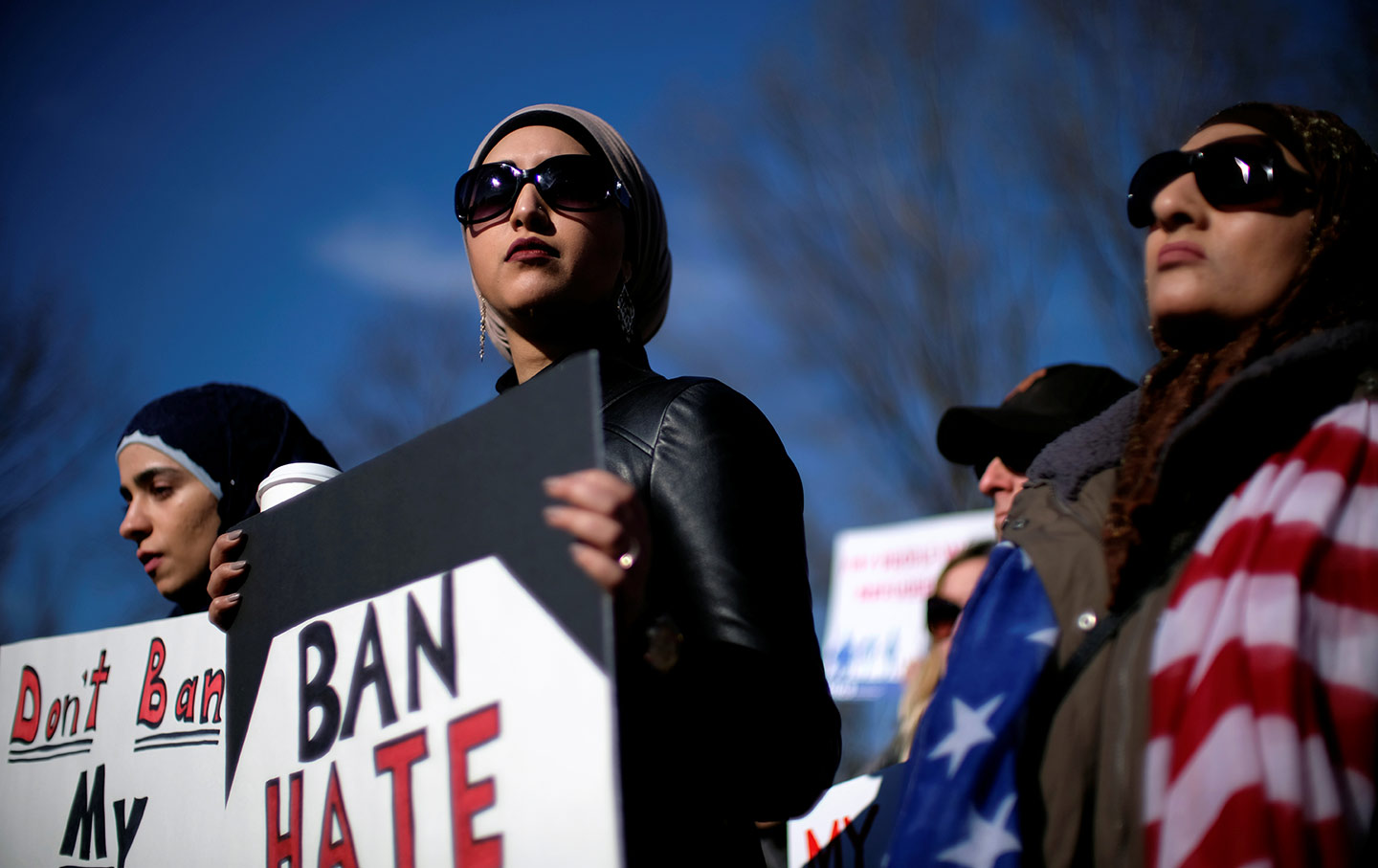 How the Courts Have Stymied Trump

In Lucia v. Securities and Exchange Commission, the Trump administration has even challenged the constitutionality of its own executive officials—because doing so furthers the right’s attack on the administrative state. Ever since the New Deal, the federal government has operated in large measure through administrative agencies, like the Securities and Exchange Commission and the Environmental Protection Agency, that issue rules, punish violations, and often adjudicate cases. In order to assure independence, the administrative-law judges who preside over the individual cases for these agencies are often insulated, much like the civil service, from direct hiring and firing by the president or other political actors. But conservatives opposed to “big government” have urged that these individuals must be direct political appointees, a result that would raise serious fairness and integrity concerns. The Justice Department successfully defended the SEC’s independence from political interference in the lower courts, but switched sides before the Supreme Court when Trump took office. A broad ruling could call into question the legality of administrative-law judge appointments in many other federal agencies.6

In Husted v. A. Philip Randolph Institute, the Justice Department also switched sides after Trump came to power, but in doing so also reversed more than 20 years of department precedent. In the lower courts, the department had sided with challengers to Ohio’s practice of removing voters from the rolls if they fail to vote and fail to respond to a single mailed notice, even where there’s no basis to believe that the individual has become ineligible to vote. Under both Republican and Democratic administrations, the Justice Department had maintained that such practices violate the federal “motor voter” law. But the Trump administration, in keeping with the Republican Party’s tactic of suppressing voter turnout where high turnout favors Democrats, has urged the Court to stand with voter suppression. And in another voting case to be decided this term, Abbott v. Perez, the Justice Department, which originally sued Texas for racially discriminatory voting maps, has yet again switched sides, and now defends the very state it sued.7

The pattern that emerges reflects an administration that cares little for precedent, and that will switch sides in a case at the drop of a hat if it serves the agenda of its radical base. Politics at the Justice Department is not exactly new, but the brazenness of this administration’s positions is unprecedented. The solicitor general is sometimes referred to as the “tenth justice,” because he or she is supposed to be more loyal to the law than to politics. That tradition, like so many others, has been abandoned by this administration and this solicitor general. The question now is whether the Supreme Court will go along for the ride, or stand up for the rule of law when the executive branch has so radically thrown it overboard.8