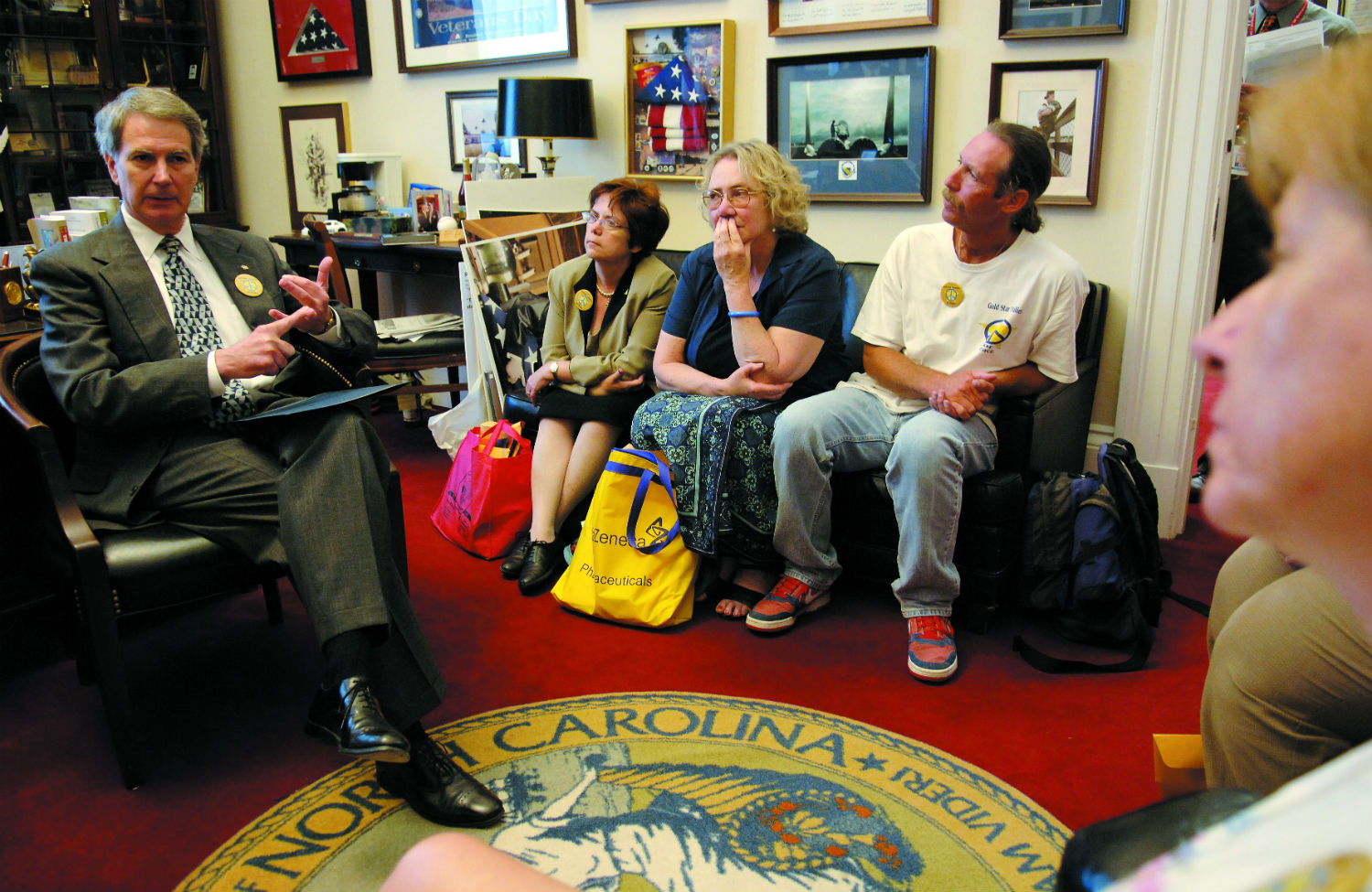 Congressman Walter Jones, a Republican who represents a wide swath of eastern North Carolina, might not strike you as a populist. But as a lawmaker, the veteran politician with a slow Southern drawl has become a gadfly in his own party for thumbing his nose at powerful political interests. He is the only GOP co-sponsor of the DISCLOSE Act, a measure to reveal the donors of dark-money campaign advertisements. He is among the loudest critics of the war in Iraq and Afghanistan, telling an audience one that “Lyndon Johnson’s probably rotting in hell right now because of the Vietnam War, and he probably needs to move over for Dick Cheney.” And Speaker John Boehner removed Jones from the House Financial Services Committee, which oversees Wall Street. His sin? Bucking leadership and supporting many bills to further regulate the financial sector, along with serving as the last remaining House Republican to have voted for the Dodd-Frank reform package.

The Republican establishment has attempted to remove Jones from office by dispatching a number of primary challengers over the years. For this cycle, a former Bush administration aide named Taylor Griffin is the party favorite to finally wipe out Jones.

Several outlets, such as Bloomberg News, have reported that Griffin’s candidacy is being heavily promoted by the financial industry. JPMorgan Chase, Bank of America, Wells Fargo and other banks helped fuel the $114,000 fundraising haul Griffin reported in his first campaign disclosure report. Earlier this week, a Super PAC financed in part by hedge fund titan Paul Singer went on air with a negative ad against Jones.

What hasn’t been reported, however, is that Griffin himself is a longtime political consultant for the biggest predators on Wall Street.

Republic Report has obtained a disclosure report that shows that Griffin’s client list reads like a who’s who of financial interests that have preyed upon North Carolina families for short term gain.

Griffin, whose career includes a stint on the the Bush election campaign team and Treasury Department, is a co-founder of Hamilton Place Strategies, a “policy and public affairs” firm that boasts of its team of former government officials. Like many companies that work to influence policy within the Beltway on behalf of corporate interests, Hamilton Place Strategies does not register under the Lobbying Disclosure Act, though it advertises its ability to shape the regulatory environment. The company, which specializes in public relations, is located a stone’s throw from K Street and the White House in a corridor of Washington favored by many influence peddlers.

Griffin touts himself as a conservative small businessman. His campaign website “About” section makes only a passing reference to his prior position with Hamilton Place Strategies, noting obliquely that he founded a “leading public policy consulting firm, quickly growing it to a business that included over 20 employees on its payroll.” Before launching his campaign in October, Griffin sold his share of the firm and moved to New Bern, a city within North Carolina’s third congressional district.

Griffin’s client list has never before been reported. But a mandatory candidate filing, disclosed by the House Clerk last week, opens a window into his business operation.

Though Griffin revealed his LPS work on his disclosure form, he also refused to list other clients, noting that “certain confidential clients are not reported due to terms of agreement into at the time services were retained.” But public statements from his company, including from Tony Fratto, another co-founder of Hamilton Place Strategies, shows the firm has been working for Magnetar Capital, a hedge fund famous for helping helping inflate the housing bubble that led to the 2008 financial crisis.

In a Pulitzer Prize–winning article for ProPublica, reporter Jesse Eisinger revealed that Magnetar helped create “arcane mortgage-based instruments, pushed for risky things to go inside them and then bet against the investments,” a scheme that earned them hundreds of millions of dollars. Now, according to reports, Magnetar is back in the housing business, taking advantage of low prices to buy up homes and rent them out.

As part of their strategy to dupe investors, Magnetar allegedly enlisted the rating agency Standard & Poor’s to provide a high-level A-grade listing for Magnetar’s synthetic financial products. Though it’s not clear what he did for the firm, Griffin lists McGraw Hill Financial, the parent company of Standard & Poor’s, as one of his clients (the firm has been accused of engaging in other fraudulent rating schemes that led to the financial collapse).

Another Griffin client, according to his ethics form, is an interest group that is actively lobbying to hike property insurance rates on North Carolina families, including those in the Outer Bankers region Griffin hopes to represent.

As The Charlotte Observer reported, without this legislation, some coastal families faced flood insurance rate hikes from $850 a year now to as high as $21,000.

Griffin’s campaign did not respond to Republic Report’s request for comment about his personal finances. The forms, however, have other revelations.

Griffin has told reporters that he sold his shares in Hamilton Place Strategies, suggesting that he is no longer affiliated with the firm or in public policy consulting. However, the disclosure reports show that he has continued to earn a living from Hamilton Place Strategies—at least in excess of $5,000—and this year earned income (likely through his other consulting firm, Sulgrave Partners) from PCIAA, McGrawHill Financial, Huron Healthcare, Motorola Mobility and other clients.

In his first television advertisement that began airing this month before the May 5 primary, Griffin says that he is the “clear conservative choice for Congress.” In a spot that is clearly biographical in nature, Griffin references his consulting work for the financial sector interests thus: “I’ve also owned my own business, so I know what it means to make a budget and stick to it.” Left unsaid, the $406,000 a year he earned promoting the very worst of Wall Street.