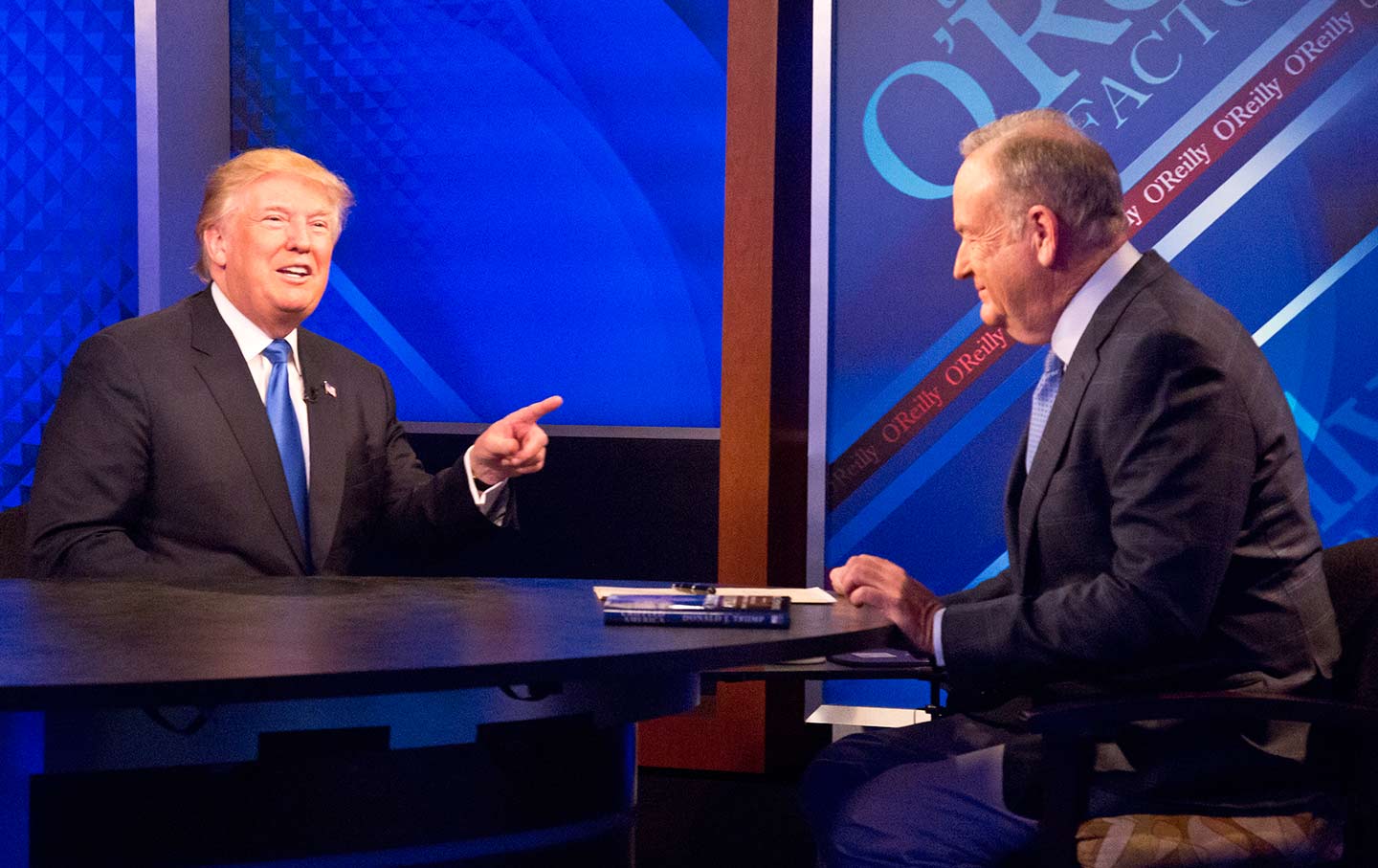 Now that the Trump campaign is reaching its final implosion, let’s take stock of those journalists and media moguls who used their influence and airtime to enable this catastrophe.

First and foremost on the list would have to be Rupert Murdoch. New York magazine’s Gabriel Sherman has detailed the genesis of what he termed the “Murdoch-Trump alliance.” He quoted a Murdoch insider explaining that the boss “doesn’t like people to be snobs and treat Trump like a clown,” though, of course, this is exactly what he is. Despite the kerfuffle with prize Murdoch property Megyn Kelly, in which Trump put his ignorant misogyny on full display, Murdoch tweeted that the GOP “would be mad not to unify” behind Trump. The deal, according to Sherman, was largely brokered by Trump’s son-in-law, Jared Kushner, the Orthodox Jewish owner of The New York Observer, who doubles as a top adviser to the billionaire’s campaign of anti-Jewish hatred. As a result, Sherman noted, Trump’s fellow sexual predator, former Fox News honcho Roger Ailes, sent out the word: “Make sure we don’t go after Trump.” This led one anchor to complain, “We’ve thrown in the towel.”

CNN president Jeff Zucker had no problem with misinforming his audience in the service of exploding ad revenue.

Pushing Trump has also been the rule at other Murdoch properties. The New York Post is among the few newspapers in America to endorse his campaign, terming him “King Don” after his New York primary victory. (Joining the Post in this lonely endorsement was the Las Vegas Review-Journal, which—surprise, surprise—is owned by Sheldon Adelson and deployed, much as Murdoch uses the Post, as a propaganda sheet for its owner’s business interests and extremist ideology.) The Wall Street Journal generally does not endorse, but editor in chief Gerry Baker made sure his staff understood the need to be “fair” to Trump, lest their professionalism interfere with its owner’s political agenda. This attempt to further bias the paper’s Murdoch-meddled news coverage is, of course, augmented by its far-right, science-denying, supply-­side-economics-cheerleading editorial page.

Per usual, Murdoch’s corporate interests and ideological obsessions reinforced each other regarding Trump’s candidacy. Not only did ratings reportedly dip on Fox whenever anyone was too critical, but when Trump loses, Fox will have to start worrying that a Trump-branded “alt-right” media empire will steal away its most fervently nutty viewers. Over at CNN, however, things are less complicated: Sucking up to Trump brought in viewers and hence massive amounts of advertising dollars for the network, something its president, Jeff Zucker, has known since the days when he promoted Trump’s reality shows at NBC. Zucker disgraced CNN by constantly running Trump phone calls and rallies as if the “C” stood for “Cheerleader.” He also hired Trump apologists, including former campaign manager Corey Lewandowski, who, while being paid by CNN to allegedly offer his honest opinions on the election, was simultaneously being paid by the Trump campaign to do exactly the opposite. At no point did Lewandowski do anything on the air that was inconsistent with his role as an official Trump mouthpiece—up to and including his willingness to parrot Trump’s recent complaint that the election is somehow “rigged,” a move that power-hammered the final nail in his political coffin. And yet Zucker had no problem with deliberately misinforming his audiences in the service of exploding ad revenue.

Indeed, it was the lust for filthy lucre that led all the networks, save Fox, to embrace Trump. “It may not be good for America, but it’s damn good for CBS,” admitted network president and CEO Les Moonves in one of the great understatements of the election cycle, according to The Hollywood Reporter. “The money’s rolling in and this is fun…. It’s a terrible thing to say. But, bring it on, Donald. Keep going.”

While more critical than CNN or Fox, MSNBC cannot be said to have covered itself in glory either. Joe Scarborough, who enjoys fully 15 hours of unfettered airtime every week on the allegedly liberal network, has made some of the most egregious pro-Trump arguments heard anywhere during this election cycle. He defended Trump’s joking assassination encouragements to gun nuts. “Hillary Clinton has had people around her with guns wherever she went since 1978. Since 1978!” he said early in the campaign. More recently, as Trump began undermining the democratic process by keeping the country “in suspense” about whether he will accept the election results, Scarborough shrugged off the alarm. “It’s just another example of the media having to find a little phrase and freak out.”

Scarborough is often joined in his quest to be a Trump bromancer by his ubiquitous guest Mark Halperin. The famous inside-baseballer has bathed himself repeatedly in Trump’s orange glow, posting romantic-style selfies with the nominee from his helicopter and defending his racist arguments about Mexicans and guns, among many other outrages. Halperin admits aloud that he idolizes Trump as “one of the two most talented presidential candidates any of us have covered…in terms of pure political skill”—the first being Bill Clinton. And after the third debate, he described Trump’s egregious democracy-threatening comments as something that only “offends the sensibilities of elites.”

It will be interesting to see how many of the above “journalists” seek to cash in postelection with Trump’s soon-to-be media empire. Kushner has already held meetings with investment bankers who presumably would put up the cash for what would likely be a white-nationalist news network, ready to embrace conspiracy theory after conspiracy theory pushed by neo-Nazis and other right-wing hate groups. As with Fox and Breitbart, a Trump-owned network would have the effect of pushing the 50-yard line of American discourse into a make-believe land where the president is illegitimate, science is a fantasy, and race and religion are dividing lines between “real Americans” and potential traitors. One thing’s for sure: There will be plenty of people willing if the price is right.