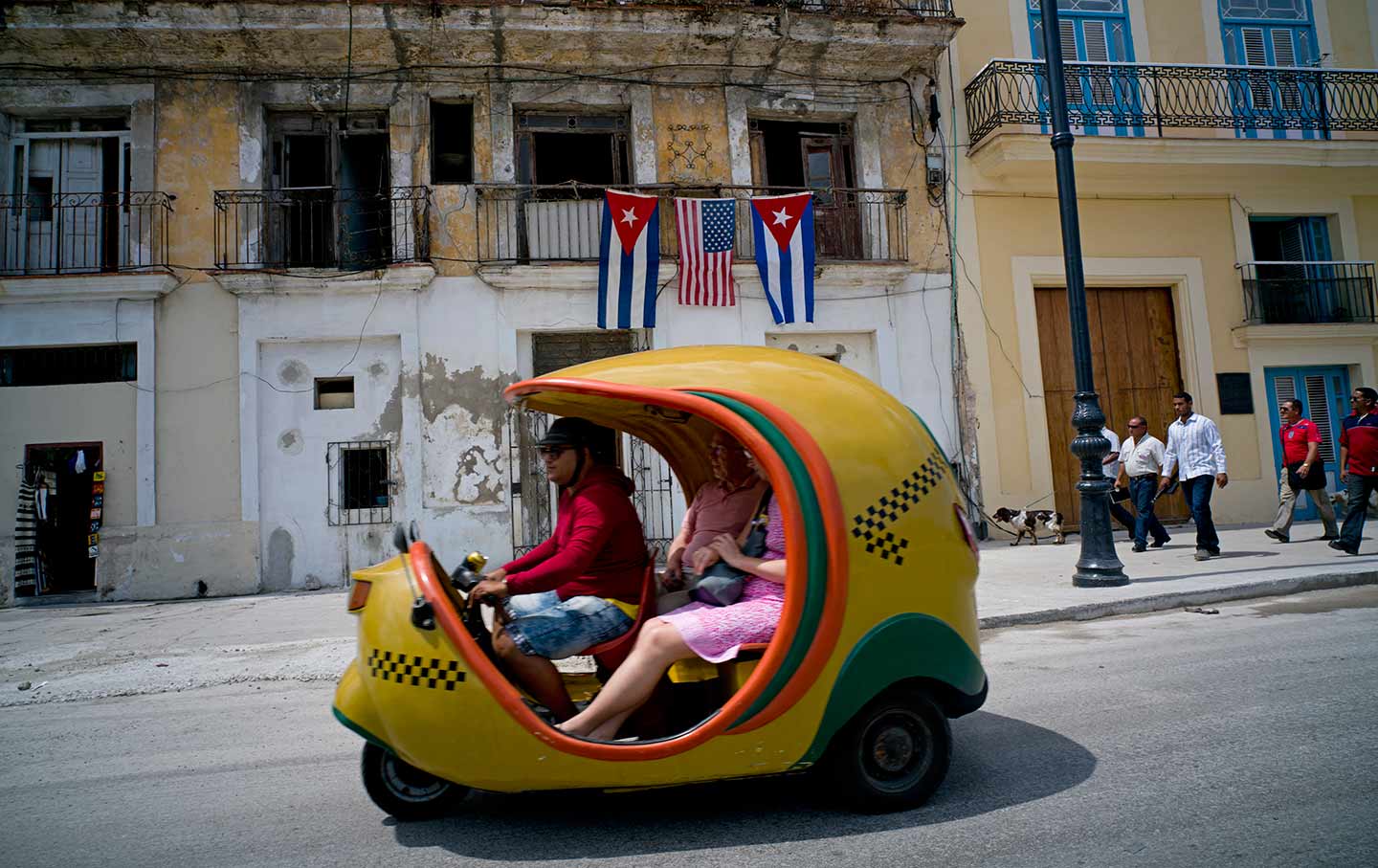 Tourists in a moto-taxi drive past a balcony decorated with Cuban and US flags in Havana, Cuba. (AP Photo / Ramon Espinosa)

Sandra is a 32-year-old Cuban psychologist. In 2015 she began to rent her home in the Flores neighborhood, outside of historic Old Havana, to take advantage of the boom in US tourism following the historic breakthrough in US-Cuban relations announced by Presidents Barack Obama and Raúl Castro on December 17, 2014. But now the boom is a bust. This fall, she turned in her cuentapropista—self-employment—license since, she says, “only American tourists are willing to be this far from the center and pay the prices we charge for these residences.”

Julio is a 68-year-old retiree. At considerable cost, he restored and altered his 1951 Oldsmobile, cutting off the roof and transforming it into one of the popular vintage convertibles that give Havana’s streets so much color and character. American visitors love these classic US cars so much that, until recently, they paid as much as $50 an hour to drive around in one. Today, Julio’s car is at home. There are no more tourists to pay for his services; and because there’s no longer a roof, he can’t drive the car around as a taxi for Cubans because the “sun is too bothersome.” 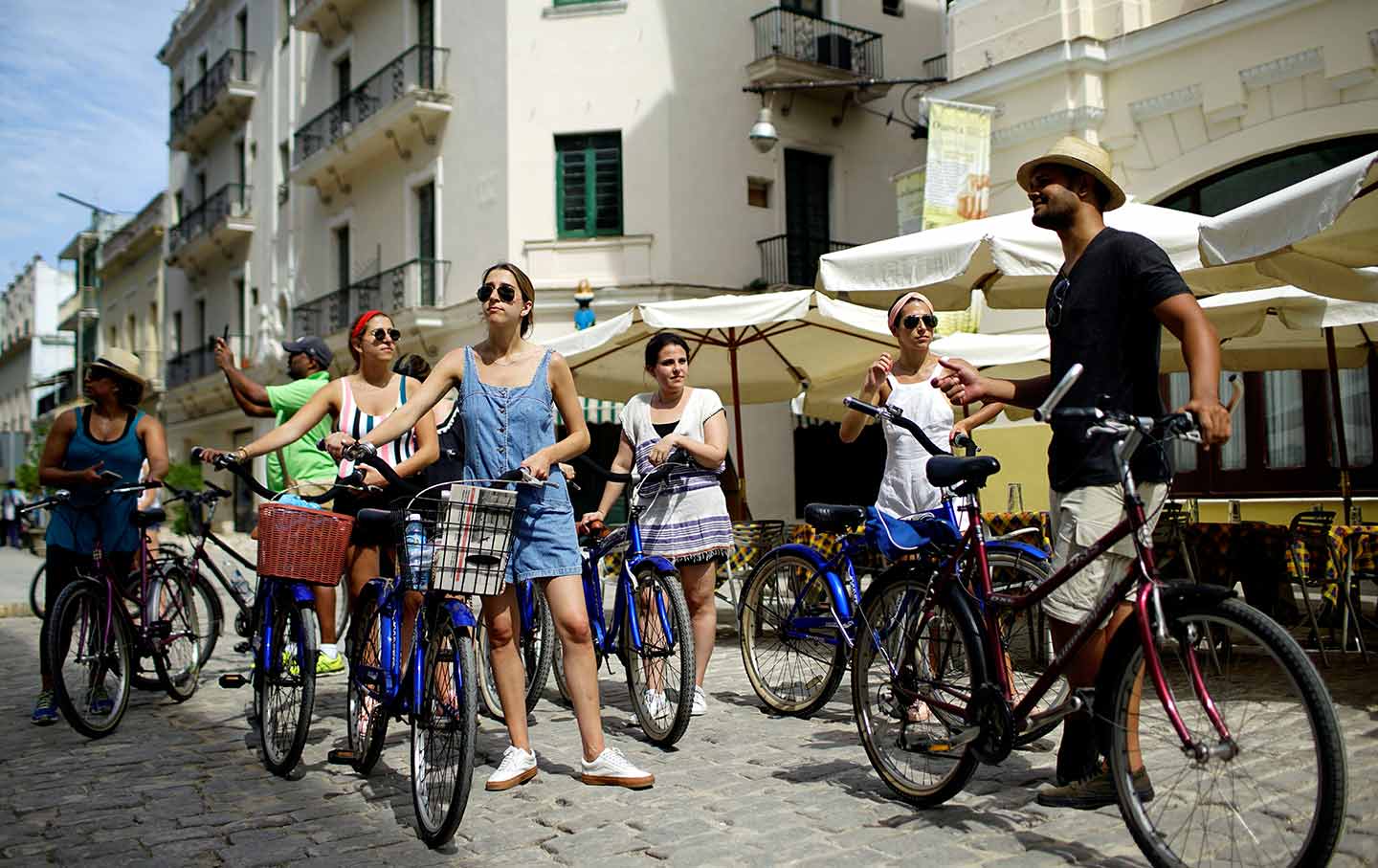 Has Travel to Cuba Been Trumped? A ‘Nation’ Forum

Sandra and Julio’s dire economic experiences show the impact of the Trump administration’s efforts to sabotage the recent opening in relations. Trump began the rollback on June 16, with regime-change rhetoric and a new directive curtailing the ability of individual US citizens to travel to Cuba. His administration further scared potential travelers by announcing a “travel warning” in late September, tied to the mysterious maladies that affected US Embassy personnel last winter. And on November 9, the US State and Treasury departments issued new rules and regulations on US travel to Cuba, as well as a “Cuba Restricted List” of hotels and stores where those who do travel are prohibited from any commercial transaction. The result is that potential individual US travelers appear confused, scared, and, in too many cases, deterred from coming to Cuba.

Trump’s declared intention behind this decision is to prevent tourist dollars from going to the Cuban military. In practice, however, his policy hurts Cuban entrepreneurs—the very private-sector small businesses that US officials claim to support. Cubans who opened private restaurants that cater to US visitors, who fixed up their homes and began renting them on AirBnB, who are restoring and driving those alluring vintage US cars, and who became guides and fixers for the tens of thousands of US citizens who came to Cuba in 2016 and the first half of 2017, are among those most affected. Those Cubans—I am one of them—bet on, and invested in, the continued growth of American tourism on the island.

The individual people-to-people category was the one most commonly used by Americans visiting the island; it was the easiest to obtain and the cheapest way to visit Cuba.

President Obama opened the door to that tourism with the expectation that tourist dollars would help expand Cuba’s small private sector. He authorized individual US citizens to designate themselves as “people-to-people” visitors. Trump’s new regulations eliminate that category for individual travelers. Now, all non-academic educational visits under the “people-to-people” licenses must be done through a recognized US group-tour agency. This last point is key, as the individual people-to-people category was the one most commonly used by Americans visiting the island; it was the easiest to obtain, the cheapest way to visit Cuba, and the one that offered the most freedom to travel around the island.

I spoke with an official from Cubatur, the largest government-run tourist agency on the island, who told me that “after the decision by the Trump administration we have seen a surge in Americans, since we’re the ones with agreements with American organizations who are authorized to charter people-to-people trips to Cuba.” But Cubatur groups stay in state-run hotels, eat in state-run restaurants, travel the island in state-owned buses, and use state-employed tour guides for their excursions. The Cuban private sector is excluded from much of this economic activity.

Our US clients enjoy going to humble neighborhoods and seeing how everyday people live. Through those interests, they support the private sector.

As a result of the US tourist boom that began in 2015, I and my Cuban colleagues founded Cuban Trails, a small, creative tourist agency. We began operating educational and cultural tours in January 2016. In the beginning, our main clients were Canadians and Europeans. But by the second half of 2016, we and a lot of other cuentapropistas in the tourist sector found that the majority of our clientele were US citizens.

American and European tourists are different. The main difference is the generosity of travelers from the United States: Europeans don’t tip, and they are used to haggling over prices. We also noted that our US clients enjoyed the experience of engaging Cuban culture and society; they prefer to be participants in the tourism experience, as opposed to simply being on vacation. They enjoy going to humble neighborhoods and getting out of the capital to see how everyday people live. And, through those interests, they support the private sector.

For example, one of my clients, named Lucy, came to Cuba in December of 2016 with her family to learn about Ernest Hemingway’s life on the island. She stayed at a casa particular (private home) rented through AirBnB and contracted my agency to organize her five-day stay in Havana. From transportation to the guide who specialized in the life of the great writer, her entire trip was done through the Cuban private sector.

Another client was a former military officer named John. He came on the cruise ship Adonia this past May, and was interested solely in culture in Havana, in particular Afro-Cuban art. He contracted us to provide specialized transportation (due to a physical impediment), and we arranged his visits to private galleries and workshops, like José Fuster’s Fusterlandia and Choco’s Sol studio.

None of our US clientele came to Cuba for traditional “sun and beach” tourism. They came to understand Cuban culture and society.

Another traveler was Andrew, who worked for Disney. He came with some friends to learn where the best cigars in the world are made. He contracted us for transportation and for a guide specialized in tobacco production. Andrew always ate at private restaurants. He visited state-owned cigar shops but also helped private farmers by buying their hand-rolled cigars.

It is important to note that none of our US clientele came to Cuba for traditional “sun and beach” tourism. They came to understand Cuban culture and society. They were conscientious travelers, who engaged in true people-to-people tourism.

Trump’s measures are severely limiting my tour-guide company and many other small businesses on the island.

Now, because of Trump, they have stopped coming.

Indeed, Trump’s measures, along with the travel warning, are severely limiting the function and future of my tour-guide company and many other small businesses on the island. Trump has eliminated the principal category by which my clients came to Cuba. The fact that US citizens must now travel under the auspices of a US tour company hurts me and others economically because now we are limited to being subcontractors, and no longer have the ability to work with clients directly—if at all. American tour agencies have contracts with Cuban government-run agencies and hire them—not those of us who are in the private sector. Last but not least, Trump’s rhetoric and restrictions have created a climate of uncertainly among travelers who are simply choosing to go to other vacation destinations instead of Cuba.

It is high tourist season in Cuba now. But I know restaurateurs whose business is down 60 percent compared to last year. The Cuban small business sector, so dynamic just a few short months ago, is now struggling to survive. Examples of bankruptcies are multiplying throughout the country.

Enrique, a 45-year-old Cuban who lived in Holland for 25 years, decided to return to the island in 2015. He and an Italian friend opened a restaurant in Havana. Their eatery quickly turned into a hot spot, with space being booked upwards of two months in advance. But since November 9, he has been affected by cancellations of over 80 percent of scheduled reservations. His principal clients had been those arriving on cruise ships.

And Fidel, a 29-year-old tourist guide, has not had work since August.