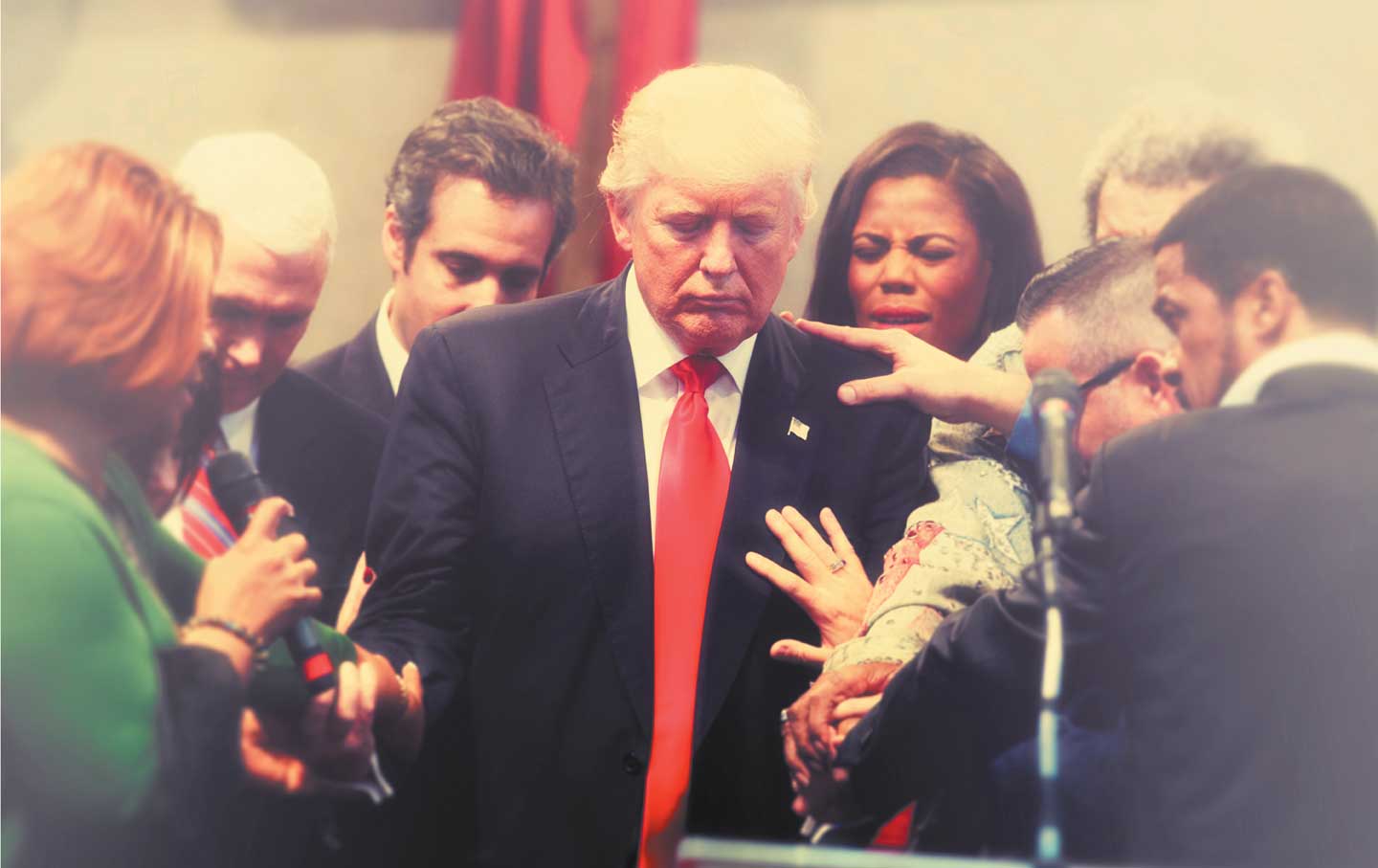 After Donald Trump’s victory, a debate broke out among journalists about where they should focus their attention during his presidency: on the Trump administration itself, with its mogul-rich cabinet, gross conflicts of interest, and swamp of ethical questions? Or on the American heartland, which was so overlooked during the campaign and whose decisive support for Trump caught so many news organizations by surprise?

In weighing the merits of these approaches, it’s useful to consider the case of Betsy DeVos, Trump’s nominee for secretary of education. The initial wave of articles about her focused on her longtime support for school vouchers, charter schools, and the privatization of education. They noted that her husband, Dick DeVos, is heir to the Amway fortune; that her brother is Erik Prince, the founder of the Blackwater security firm; and that she is a generous contributor to the Michigan Republican Party. Going somewhat deeper, Jane Mayer reported in The New Yorker that DeVos “comes from the very heart of the small circle of conservative billionaires” who have long backed right-of-center causes. Mayer described her close links to Charles and David Koch and her support for organizations like the Heritage Foundation and the Council for National Policy, a little-known group that matches conservative donors and activists.

Among these early reports, I found only one that explored a key aspect of DeVos’s life: her religion. Writing in The Washington Post, Sarah Pulliam Bailey described DeVos’s close ties to the Christian Reformed Church, a Calvinist denomination based in Grand Rapids. She noted that DeVos graduated from Calvin College, which is named after John Calvin, the 16th-century founder of Calvinism, and that she is currently a member of the Mars Hill Bible Church, a megachurch formerly led by the “popular author” Rob Bell. According to the Post, DeVos’s positions on school vouchers “appear to be motivated by her Christian faith.” She was deeply affected by a visit to the Potter’s House Christian School in Grand Rapids and by its efforts to provide kids a safe and nurturing environment; she and her husband became generous backers.

Even this article, however, barely scratched the surface of DeVos’s religious associations. Grand Rapids, her base of operations, is in effect the capital of American Calvinism. The Christian Reformed Church is a stronghold of Calvinist orthodoxy. The mission of Calvin College (as stated on its website) is to prepare its nearly 4,000 students to live “as Christ’s agents of renewal in the world.” (Since 1999, the college has received about $650,000 from the Dick and Betsy DeVos Family Foundation.) Also located in Grand Rapids are the Calvin Theological Seminary and Kuyper College, which is named after Abraham Kuyper, an influential Dutch Calvinist who served as prime minister of the Netherlands from 1901 to ’05 and who vigorously promoted religiously based education. Kuyper is an intellectual lodestar for DeVos, as for many other Christian activists and thinkers. Grand Rapids is also home to Family Christian, the world’s largest Christian-themed retailer, as well as four leading Christian publishing houses (Baker, Eerdmans, Kregel, and Zondervan).

And then there’s Mars Hill, a nondenominational church just outside Grand Rapids that attracts thousands of people to its two Sunday services. Since its founding in 1999, the church has received more than $5 million from the DeVos Foundation. Rob Bell, its founding pastor, was very popular until 2011, when he came out with Love Wins: A Book About Heaven, Hell, and the Fate of Every Person Who Ever Lived, in which he questioned many traditional Christian ideas, including the existence of a hell to which the damned are condemned to suffer for all eternity. The book landed Bell on the cover of Time, but his heterodoxy outraged many theologians, and he was forced to leave Mars Hill.

Independent journalism and freedom of the press have never been more important in our democracy. Subscribe to your local newspaper, donate to your public-radio station, and then support these groups:

Center for Public Integrity: Winner of a Pulitzer Prize in 2014, CPI uses investigative journalism to expose corruption, abuses of power, and betrayals of the public trust. publicintegrity.org

In short, Grand Rapids is an important incubator of conservative Christian ideas and a training ground for evangelical pastors and theologians; the nomination of DeVos as education secretary is but the latest sign of its national influence. Yet very little about all this has appeared in the press. It’s an example of the cluelessness among journalists about religion in America—a shortcoming that was apparent during the presidential campaign in their befuddlement at Trump’s popularity with American evangelicals (of whom about 80 percent voted for him).

So, as to the question of what the press should focus on—Trump or Trump’s America?—the answer is: both. To fully grasp the policies and activities of his administration, it’s critical to understand the constituencies and communities behind him and his advisers.

Dean Baquet, the executive editor of The New York Times, gets this. In the interviews he’s given since the election, he has expressed his intention both to strengthen the paper’s “investigative and explanatory reporting” in Washington and to improve its coverage of the “anger in the country,” which, he said, the Times did not “have a handle on during the election.” He wants the paper to be “much more creative” about beats in the country “so that we understand that anger and disconnectedness that people feel,” and he has singled out “the role of religion” as in need of more attention.

Baquet has already delivered on the Washington part of his pledge, increasing the number of reporters covering the White House from three to six. It’s less clear what he intends to do about the rest of the country. Here’s a possible approach: Pry away a journalist from each of the paper’s glossy high-end sections—Styles, Travel, Food, Real Estate, Arts & Leisure, and T magazine—and reassign them to cover neglected parts of America. The Bible Belt could be one such beat. The person assigned to it would report regularly on the events, debates, and attitudes at the nation’s roughly 1,300 megachurches (defined as having 2,000 or more attendees at weekend services), 200 institutions of biblical higher education, 1,000-plus Christian broadcast outlets, and dozens of Christian publishing houses, many of whose products regularly show up on best-seller lists without attracting much notice from the national press. (The Magnolia Story, by a pious home-renovation couple featured on the HGTV reality show Fixer Upper, was number two on the Times nonfiction list at the beginning of 2017.)

I would also create a blue-collar beat examining the world of factory workers, carpenters, plumbers, firefighters, and police officers; a small-business beat exploring how the world looks to restaurateurs, entrepreneurs, family farmers, and start-ups of the non–Silicon Valley variety; and a roving culture beat concentrating not on movie studios, fashion shows, and art auctions but on how culture—broadly defined—is consumed in and perceived by grassroots communities across the country.

Finally, I’d assign someone to cover poverty full-time. The estimated 45 million Americans living below the poverty line were nearly as invisible during the campaign as the white working class was. Having someone regularly cover the nation’s inner cities, trailer parks, and coal-country hollows could help keep this “other America” in the public eye.

My fear is that little of this will happen and that the press will simply continue business as usual. This sense was reinforced by the Times’s January 10 front-page story about Betsy DeVos. Headlined Trump Education Pick Plays Hardball With Her Wealth, it focused mostly on her support for right-wing political causes; her religious connections received only scant mention. Overall, the piece was typical of the Times’s investigative efforts: It was long, thorough, detailed, conventional, and, frankly, hard to get through. With Trump promising a radically different presidency, journalists need to undertake a radical rethinking of their work—to figure out how to cover not only the White House but also the deeper, subterranean forces shaping the country. Otherwise, they’ll remain dependent on books like Hillbilly Elegy, J.D. Vance’s first-hand account of growing up poor in Appalachia, which is the closest most journalists have gotten to that region.