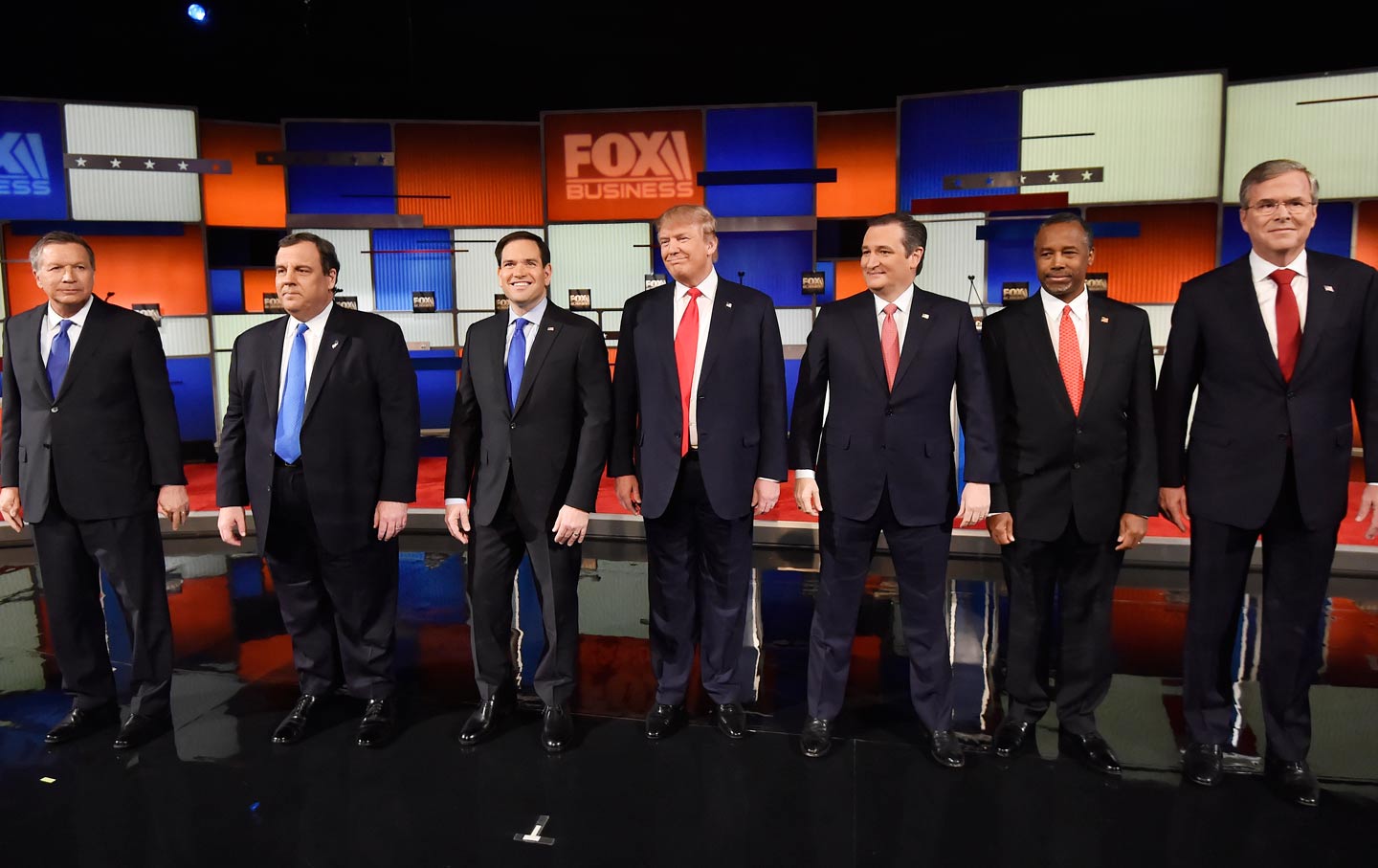 It has become clear that the only way to deal with the most serious economic issues facing our country—inequality, underemployment, wage stagnation—is not just to elect a Democrat as president in the November elections but to completely destroy the Republican Party. To do so, we will have to think beyond particular candidates and specific elections. We will have to think more radically, to propose more fundamental reforms. The Constitution of 1787 offers far too many nooks and crannies in the cobwebbed architecture of our political system in which Republicans can hide out and bide their time before attempting another hostile takeover of our democracy. Because the founders-approved option of amending the Constitution is, for the time being, unavailable to us, we will have to figure out ways of amending it without formally amending it, in order to end the artificially enhanced prominence of a party that has been so malignant in its current form.

First, we need a plan to immediately end the gerrymandering of congressional districts. Without taking this step, there could be no hope of returning the people’s chamber to the people’s hands. If we wait until after the next census, in 2020, it will be too late. By then, even if the Democrats win by a landslide in 2016, the GOP will have returned.

For starters, if they do not take back the House of Representatives in the fall, Democrats should file lawsuits in the courts arguing that the gerrymandering of congressional districts is a violation of the Constitution, which nowhere explicitly confers on the states the power to gerrymander, or even to create congressional districts. (One section of federal law, 2 U.S.C. 2c, may do so, but it, too, says nothing about gerrymandering.) The states cannot claim the power under the 10th Amendment, which “reserves” powers that the states would have had prior to adoption of the US Constitution. The states cannot logically be said to have had the power to organize their delegations to a body that did not yet exist.

In past attempts to end gerrymandering, Democrats have practically tried to lose. They haven’t really wanted to end the practice in its entirety—only a particular GOP-favored form of it that is derided as “going too far.” This is because many Democrats in the House, even when they are in the chamber’s minority, have ridiculously safe seats thanks to gerrymandering. This is important for progressives to understand: It hasn’t only been the conservative bloc on the Supreme Court that has kept gerrymandering in place. It’s also because our own side keeps making incoherent arguments that “some” gerrymandering is okay. If we were able to get rid of gerrymandering entirely, any consideration of voter registration data in drawing up boundaries of congressional districts would be impermissible. There would not be the current need to show “intent,” much less the requirement of proving that one party has been “shut out” from representation, whatever that means.

It used to be argued that there was no fair alternative to gerrymandered districts. But that is no longer true. California, Arizona, Iowa, and New Jersey not only discourage partisan redistricting—as Florida does—but actually have procedures like independent or bipartisan commissions to ensure that it does not occur. For years we could not even imagine these alternatives. Now we have them—and we know they work.

If the Democrats take back the House of Representatives in November—which is not impossible if Donald Trump or Ted Cruz is the Republican nominee—there would be a much faster and easier way to keep the chamber in the party’s hands. Article I, section 4 of the Constitution—the elections clause—allows Congress to commandeer the conduct of federal elections: “The times, places and manner of holding elections for Senators and Representatives, shall be prescribed in each state by the legislature thereof; but the Congress may at any time by law make or alter such regulations, except as to the places of choosing Senators.” There is no state rule, no line drawn, nothing, that Congress under Article I, section 4, cannot “alter or amend.”

Requiring a reallocation of some or all of the congressional districts prior to the election in 2018—a process that would be overseen by either a non-partisan federal commission or by non-partisan commissions in the states—would at least give the party a chance to hold on to the House in the 2018 mid-term elections. Introducing at-large voting or proportional statewide representation in all the states would be even better, accounting for the fact that Democrats increasingly tend to cluster in cities and Republicans in more rural, under-populated areas; perhaps a compromise would have states with more than two members of Congress split their representatives between those chosen by individual districts and those chosen by statewide election.

It is long past time to bring down America's democratic deficit.

In the case of the Senate, of course, it will be harder to root out the GOP. The principle of equal state representation—putting North Dakota on the same level as California—is a devastating and tragic violation of the one-person-one-vote principle. The upper house continues to fulfill the design of the founders, who created it as a check on the democratic passions of the voters. We have a “democratic deficit” at least as encumbering as the European Union’s. It is long past time to bring down that deficit.

The second necessary reform is liberating the Senate from the encumbrances of the filibuster. In November 2013, the Democratic-led Senate ended the use of the filibuster for executive-branch and non–Supreme Court judicial nominees—this was the so-called “nuclear option.” Though largely unnoticed, it was the seismic event of the Obama era, arguably even more important than the Affordable Care Act. Consider labor: The new limitations on the use of the filibuster allowed, for the first time in years, genuinely pro-labor people to take positions in the Department of Labor and the National Labor Relations Board. The NLRB is far more assertive now. There’s a chance now for real regulation of Wall Street, should the Democrats win the presidency in 2016 and recapture the Senate.

But should the Democrats ever recapture the House as well, a Senate without a filibuster would allow for a true political revolution. Had there been no need to get 60 votes in the US Senate, we might have had the much bigger discretionary fiscal stimulus in Obama’s first year. We would have had a “public option” for Obamacare. We might have put government-appointed trustees on the boards of banks that were bailed out.

Finally, to really overcome the status-quo-defending “checks and balances” of the 1787 Constitution, we have to make everybody vote. Most people don’t vote, at least in the mid-term elections that usually give the Republican Party a “mandate” to run Congress and obstruct progress on a variety of pressing issues. In a poll conducted shortly before the 2014 congressional elections, Pew found that non-voters were disproportionately young, people of color, and in an economically precarious state. The benefits of the Affordable Care Act went to people who didn’t vote for Democrats or didn’t vote at all; it did little for many people who did. It’s doubtful that this year will be different: The people who benefit from the welfare state Democrats put in place may not come out to vote to save it. That’s the fundamental contradiction of the Democratic Party: We deliver for a phantom base. We have to make it a real one.

If non-voting is a form of illiteracy, it makes sense to use mandatory voting to stamp out illiteracy.

Enacting compulsory voting is neither unconstitutional nor impossible. The states can force citizens to serve on juries, so why can’t it force them to vote? Compared to sitting six months on a medical-malpractice case, voting once every two years is a small burden. Besides, unlike a jury, you wouldn’t literally have to do any voting at all. It is perfectly legitimate to cast a blank ballot. A compulsory voting law does not interfere in that respect with your right not to vote. It is not a burden on your right of expression.

Even if it were, the interest of the state would arguably win out. Compulsory voting increases the number of citizens making decisions—about rules, about the way we deliver or provide public goods like clean air, education, and so on. The more people who vote, the more legitimate the decisions. That’s Political Science 101. But it’s also pragmatic. It binds people to those decisions. It makes them easier to implement. Presumably, the state has an interest in its own stability.

Some might ask: Wouldn’t these be “low-information” voters? This argument is circular. Perhaps it is actually that people don’t have good information about politics because they aren’t already voters. For the Athenians—as Martin Wolf and others have pointed out—the citizens who took no part in public life were called idiotes, the source of our word “idiots.” If non-voting is a form of illiteracy, it makes sense to stamp out illiteracy.

Republicans Are Now Waging a War on Facts, Precedent, and the Constitution

Hillary Clinton and the Anti-Democratic Origins of American Politics

We could start in one state—say, California. If California passed a law requiring that every citizen cast a ballot in federal elections every two years, New York might soon follow. If a few reliably blue states with large populations passed such a measure, we would soon end up with a very different politics. The Electoral College would quickly become even more of a joke than it currently is: A big Democratic vote from California alone would run up the popular vote for any Democrat to preposterous levels. With Democratic-leaning states posting turnout rates near 100 percent and Republican-leaning ones still stuck around 35 percent, it would make a mockery of using state-by-state totals to determine who becomes president. The results would regularly be out-of-step with the choice of the country at large, undermining the legitimacy of the representatives from the small-turnout states. Mandatory universal suffrage would also offer a sharp contrast with the efforts by Republicans to restrict, rather than expand, suffrage and political participation more generally. The result would likely be enormous political instability throughout the country. Within the United States, we would have in effect two different “republics.” It would be a house divided against itself, and just as in the 1850s, this one too could not stand.

All three of these changes to our “informal” Constitution belong in the platform of the Democratic party. If the Bernie Sanders presidential campaign wants a cause in Philadelphia, it should force the party to commit to putting them into action. After all, if we are serious about limiting the power of Wall Street and reclaiming American democracy, we have to destroy the GOP.