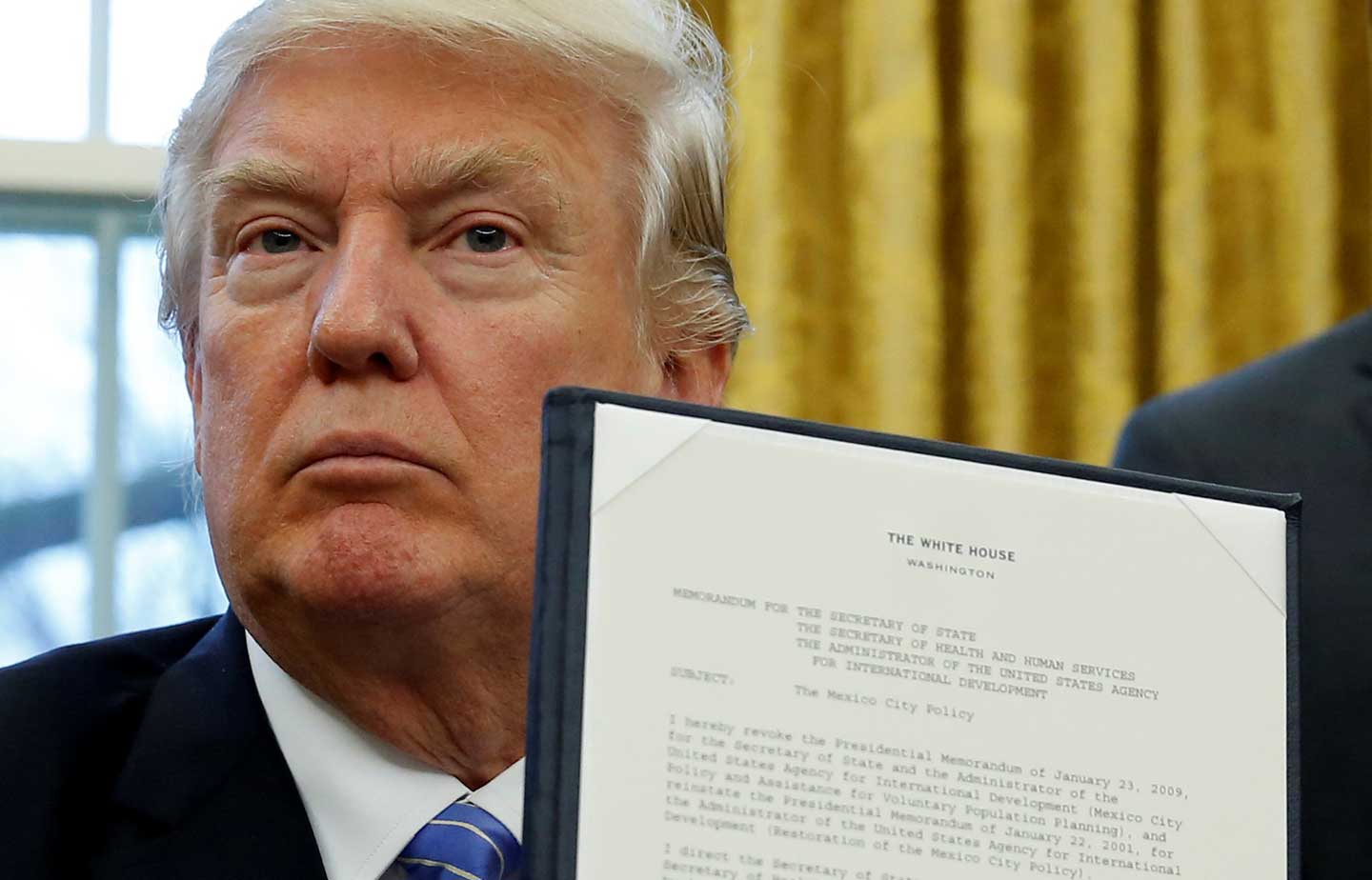 Donald Trump holds up his executive order on the reinstatement of the Mexico City Policy after signing it in the Oval Office of the White House in Washington, DC, on January 23, 2017. (Reuters / Kevin Lamarque)

One of the first policy measures taken by Donald Trump as the new leader of the “free world” was reinstating and expanding a piece of presidential policy known as the “Global Gag Rule.” The policy bars USAID funding for any organization abroad that provides abortions or even presents abortion as a family planning option. As Zoë Carpenter reported, the Global Gag Rule, first implemented by Reagan, has been repeatedly rescinded by subsequent Democratic administrations, then reinstated whenever Republicans move into the White House.

But that doesn’t mean there’s anything routine about Trump’s move to bring the Global Gag Rule back. In fact, given what we know so far about the Trump team’s foreign-policy agenda, the GGR fits a pattern of testing attacks on human rights across the Global South that can then be imposed on American soil.

How much will the Trump administration’s focus on border policy, migration, and foreign aid–funding work its way back home? As one of many aspects of Trump’s emerging foreign-policy agenda, the GGR foreshadows how policies attacking human rights across the Gobal South serve as a weathervane for oppressive measures within US borders.

Trump’s version of the Global Gag Rule goes further than previous versions have, by expanding the ban to all global health assistance, potentially affecting as much as $9.5 billion in foreign aid. According to Beirne Roose-Snyder, director of public policy for the Center for Health and Gender Equity (CHANGE), “We expect to see a much broader and deeper impact on health care delivery across the world from implementers to providers to in-country health systems.” Studies show the gag rule has wide-ranging impacts, including the shuttering of clinics across Ghana and limiting efforts to reduce unsafe abortion in Ethiopia. And ironically, gagging abortion access is associated with statistical increases in unwanted pregnancy and abortion rates.

According to Snyder, the rule’s punitive restrictions “would likely be unconstitutional if applied to US-based NGOs.” But US courts have generally ruled that when it comes to foreign-aid policy, the First Amendment effectively ends at our borders. That means that under a strict constitutional reading, the United States can discriminate in terms of which international groups it funds, and arguably can restrict funding for programs that don’t advance a US agenda—including on abortion issues.

With yesterday’s leak of a draft executive order that would effectively legalize a wide array of discrimination by private employers and institutions under a broad claim of “religious freedom,” and Trump’s announcement today that his administration seeks to “totally destroy” restrictions on religious organizations’ ability to engage in political activity, we can expect to see more pressure on both public and private health providers in the United States to curb comprehensive family-planning care and reproductive rights.

In fact, states have long used the strategy of starving providers of funding and imposing regulatory restrictions to curb abortion providers. State laws have forced clinics to provide biased anti-abortion “counseling” in order to deter abortion, have made clinics, as public spaces, more vulnerable to harassment from anti-abortion protesters, and in general done everything possible to make exercising the right to choose as miserable a process as possible. Vice President Mike Pence signed perverse legislation mandating “funerals” for aborted fetuses as governor of Indiana. Not only does this “death by regulation” approach lead to confusion and shame on the part of women choosing to terminate their pregnancies, it undermines the quality of health care overall by limiting access to comprehensive, accurate medical information.

On the national level, the Supreme Court’s decision in the 2014 Hobby Lobby v. Burwell case allowed certain employers to deny their employees contraceptive funding under the Affordable Care Act under the banner of “religious freedom” (a position supported by Supreme Court nominee Neil Gorsuch). With one or more Trump nominees, the stage would be set for the Supreme Court to deal the final blow by overturning Roe v. Wade altogether.

Throwing Sex Workers Under the Bus

In another global campaign to spread “Christian values,” the US government’s long-standing “anti-prostitution pledge” restricts funding from going to any organizations that promote or support sex work. The oath forces organizations to choose between providing comprehensive services to their constituencies, or cutting back on certain services in order to get US funding. According to researchers, the policy, which has also withstood constitutional challenges in the United States, has led to the wholesale alienation of women and girls who are already facing intense marginalization and stigma within their communities by blocking their access to counseling, family planning services and reproductive healthcare. Advocates warn that in the long run such marginalization “can endanger the lives of sex workers, their clients, and their families.”

And for a nation that projects an image of itself as a leader in promoting gender equality, encouraging the criminalization of sex work and abortion merely impedes the most vulnerable women from achieving real social equity—a direct attack on democracy, public health, and human rights that runs counter to the principle of international aid.

It’s not just family-planning programs where the United States deploys its most inhumane policy experiments; the worst abuses of Washington’s hegemonic power have always taken place in international arenas before creeping inward.

The use of private detention facilities and military contractors in border enforcement and migration detention have been experimental sites for the most exploitative forms of prison profiteering. It was, after all, the expansion of immigration detention that helped revive the private prison industry across the country, after the traditional prison industry’s profits plateaued after decades of mining black communities to fill its facilities.

Trump is now inaugurating a full-scale revival of both immigrant and non-immigrant detention with promises for more prison privatization across the prison-industrial complex. During his campaign he argued, against all evidence, that prisons are better off run by big business: “With prisons I do think we can do a lot of privatizations and private prisons. It seems to work a lot better.”

Following his election, the notorious prison privateer Corrections Corporation of America, which has racked up a stunning record of abuse scandals in recent years, saw its stock prices rise more than 40 percent.

This time, the expected onslaught of prison privatization will hit America citizens as well, as Trump promises a zero-tolerance, scorched-earth policy of crime fighting redolent of the worst excesses of the 1990s War on Drugs. (Meanwhile, in another bleak parallel between domestic and international policy the drug war could soon be revived and re-exported south of the border, with Trump threatening to send troops to target “bad hombres” in Mexico.)

One of the most obvious attacks on international human rights—with severe implications for US citizens—can be seen in Trump’s antagonism against the United Nations, the Paris Climate deal, and other basic international legal frameworks. Yet if the global climate collapses, reality will catch up to American delusion: Despite its exceptionalism, regardless of denialism, the United States remains part of planet Earth.

In all of these cases, the US has suppressed the rights of seemingly distant communities before trying to normalize that oppression at home. The communities most vulnerable to these domestic crackdowns will be women, people of color, and migrants. Fighting Trump at home and abroad, requires confronting the intersecting oppressions that make empire possible.

Trump—who has somehow branded himself as a foe of globalization—seems bent on using the rest of the world as laboratory for oppression back home, undermining women’s rights in the Global South, shuttering the border, and incrementally shredding the Bill of Rights in our communities. It’s a nationalism of exclusion, in a country increasingly unrecognizable to its own citizenry.