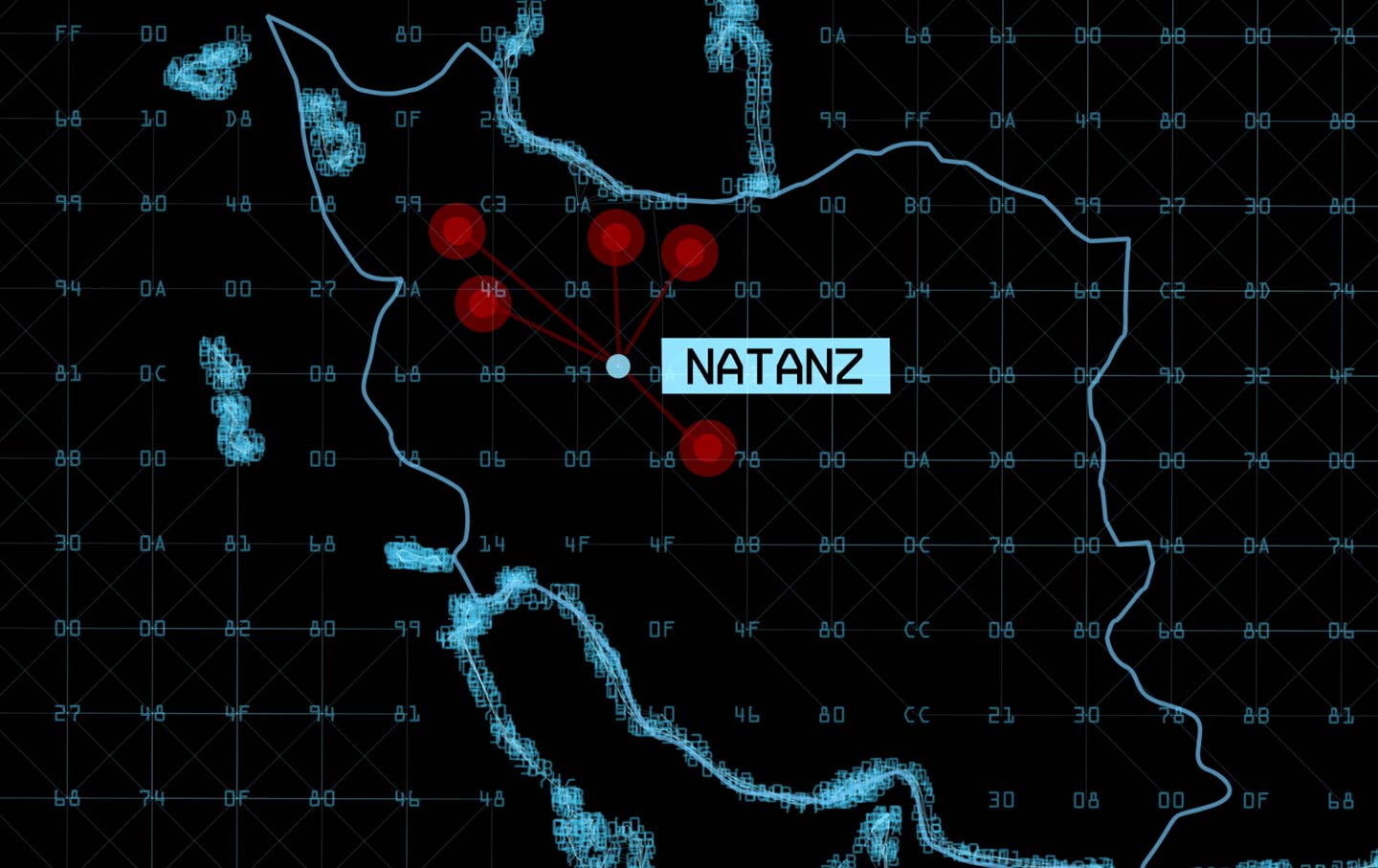 Nearly all detective stories begin with a corpse, and all of Alex Gibney’s documentaries are detective stories. In his Academy Award–winning Taxi to the Dark Side, it’s the corpse of Dilawar the cab driver, desecrated into pulp by US soldiers at the Bagram Theater Internment Facility in Afghanistan. As the curtain goes up on Enron: The Smartest Guys in the Room, the remains are those of the eponymous company, freshly expired in one of the largest corporate bankruptcies in US history. Client 9: The Rise and Fall of Eliot Spitzer and The Armstrong Lie each begins with a dazzling career in rigor mortis: Eliot Spitzer, the brainy, audacious New York governor and Wall Street corruption-buster, whose powerful enemies followed his scent to a prostitution ring, and super-athlete Lance Armstrong, the seven-time Tour de France winner who doped and managed to crush anyone who said so until he finally got busted and lost all his trophies.

And now the first minutes of Zero Days, Gibney’s latest, delivers a murdered Iranian nuclear scientist in what feels like a lost scene from Costa-Gavras’s 1969 political thriller Z. Reenactment footage generated by Iran State Television, backed by white-knuckle techno music, shows a motorcyclist deftly passing the scientist’s car and slapping a magnetic detonating device onto its roof, transforming a morning commute into a fireball.

This newest—and arguably best—Gibney doc investigates the Stuxnet virus, an ingenious piece of malware twenty times the size of a normal piece of code that in 2010 started showing up across the globe and provoked an epidemic of computer shutdowns, with Iran as the number-one infected country in the world. What made Stuxnet exceptional was not just its size but its precision: As Silicon Valley analyst Eric Chien explains, Stuxnet was a virus in which “every piece of code does something, and does something right.” This worm is what’s known as a zero-day exploit—which means nobody knows about it except the attacker, and no one needs to launch it; once downloaded, it just runs and propagates. All by itself, Stuxnet could act upon the motors, pumps, and valves that run power plants as well as transportation, healthcare, and communications systems, causing them to malfunction or shut down.

When a series of Iranian gas-pipeline explosions coincided with an assassination campaign against that country’s top nuclear scientists, and a spate of centrifuges at Iran’s Natanz nuclear enrichment facility went berserk and tore their own guts out, the range of possible perps grew narrow. These attacks offered no payday for cybercriminals, nor a coherent ideological message for hacktivists; only a nation-state stood to make any gain, or could possess the resources to pull them off. And the states with the most to gain were Israel and the United States. As the film later discloses, Stuxnet was just the beginning: the United States held in reserve an even more destructive worm called Nitro Zeus, ready to take down Iran’s power grid, air defense system, and communications infrastructure had the July 2015 nuclear deal not worked out.

If we can shut down the power on others, might others be able to do the same thing to us?

Gibney is no apologist for the government of Iran, a regime of world-class criminality with its own richly documented track record of assassinations of critics abroad. But he does invite audiences to imagine what would happen if the shoe were on the other foot: If we can shut down the power on others, might others be able to do the same thing to us? What about the consequences for democracy of an unabated and unaccountable cyberwarfare program? And what about the threat of an escalating and unending cyberwar? Such implications are far-reaching, but the director starts his investigation with a much more modest question: Why can’t we talk about Stuxnet, which everybody has known about for half a dozen years?

Gibney’s frustration with the no-comment culture is palpable. Early on, the film displays a gallery of faces from the military and intelligence communities: when asked about Stuxnet, each one answers with the same coy little smile. So a pissed-off Gibney heads for Washington, DC, where people love to leak; out of testimonies he collects from several CIA and NSA Deep Throats he crafts a sleek narrative tool: a composite character, whose words are spoken by actor Joanne Tucker, altered by animation graphics into a blond phantom made of colored dots. As she speaks, the character’s profile drifts like a ship’s prow across the inky expanse of the screen as if she were code drifting across cyberspace.

For reasons that weren’t clear to this audience member, the director chose not to reveal his nifty move with that actor and those combined testimonies until the end of Zero Days—even though he had already used a similar device to great effect in Client 9, when the sex worker at the heart of the Spitzer story was willing to lend her statement, but not her face, to the film. Indeed, in the earlier film Gibney was so transparent about this move that he allowed the audience to observe the actor getting her hair and makeup done before going in front of the lens. This time, the demure approach adds neither magic nor momentum.

In any case, the decision to make this informant a female is critical to the overall look of Zero Days, since so much of the film takes place in the Boyworld of intelligence agency bigshots, military brass and cybergeeks; the camera seems relieved when it gets a chance to linger upon, say, the face of Condoleezza Rice gazing skeptically at Dubya, or the figure of the fuchsia-suited woman standing at attention at an NSA morning briefing, or the two chador-clad women furiously waving signs at a Tehran rally.

The visual intelligence in Zero Days allows a picture built on talking heads and streams of code to be surprisingly beautiful.

Indeed, the visual intelligence at work everywhere in Zero Days allows a picture necessarily built on talking heads and streams of code to be surprisingly beautiful. Gibney makes choices the way the best painters do—not by manipulating layers of visual meaning, but by giving the eyes of the audience places where they can wander and discover and deduce. There’s the camera’s affection for journalist Yossi Melman’s carelessly knotted bowtie, or for the Mossad agent cloaked in blue-black shadow whose left arm leans into daylight and a Chardin-like domestic interior. From their cool violet office setting, the warm, open faces of cyber-security explicators Eric Chien and Liam O’Murchu emerge clean as a pair of Flemish portraits—an apt reflection of the important task they perform of shooting light into our cloud of unknowing. And when Chien and O’Murchu conduct a rudimentary real-world test of Stuxnet by inflating a yellow balloon, Gibney creates a spectacle as gorgeous and terrifying as Moloch, the fiery furnace in Fritz Lang’s Metropolis. In this fact-dense film full of hardware and software, Gibney lavishes attention on prosaic surfaces: a camera’s slow movement through cascades of nuclear-enrichment centrifuges makes them look as poignant as a stand of birches. And into the black abyss of cyberspace, colorful code tumbles and tumbles hypnotically, like the unstoppable buckets of water in “The Sorcerer’s Apprentice.”

And these images stay enthralling with support from the soundtrack by Brooklyn composer Will Bates, whose score evokes the soundscape of 19th-century European masters and 21st-century American electronica, overlaid with traces of indigenous music from other continents. Just as Philip Glass’s rapturous, ominous score offered guidance to Koyaanisqatsi, Godfrey Reggio’s 1982 meditation on the faceoff between the trembling beauty of the earth and civilization’s rush to subdue it, so in this story of another catastrophic risk, Bates’s music keeps us alert and oxygenated through these shocking disclosures.

The buzz on Zero Days is about how much it will scare you—as if all that coding information, rather than being the truth that could set us free, might be the decree that announces our right to remain overwhelmed and paralyzed. But there’s a welcome surprise here: ample evidence of democratic ideals embodied in those NSA and CIA professionals who fervently want a public conversation about the fact that the United States is the nation most vulnerable to cyberattacks—people who are angry about excessive secrecy, but who could go to jail for speaking out. “When you shut down a country’s power grid,” says the blond animation speaking on behalf of these brave, invisible informants, “it doesn’t just pop back up. It’s more like Humpty Dumpty. And if all the king’s men can’t turn the lights back on or filter the water for weeks, then lots of people die.” In a world still fractured by Washington’s careless post-9/11 grand strategies, Gibney proposes that the only real mystery is why we’re settling for silence.