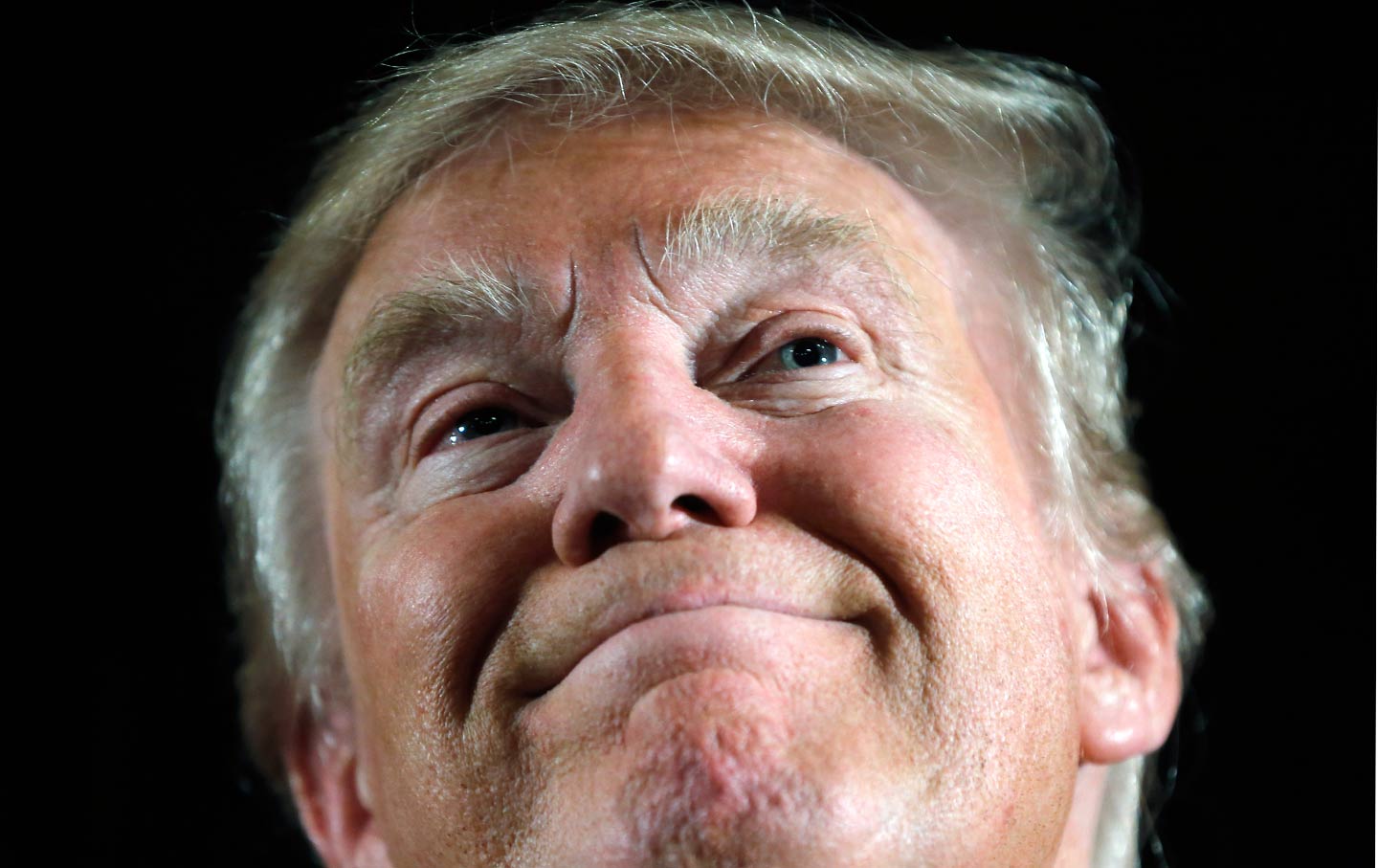 The Trump hysteria now gripping the Republican Party has an aura of slapstick comedy, like a Punch and Judy show performed by politicians. The GOP crack-up is an irresistible spectacle—men in nice suits talking dirty and bopping one another with profane verbal assaults. We the people find ourselves laughing involuntarily. Some of us also tremble for the future of the republic.

But Democrats should resist the temptation to indulge in schadenfreude, because they’re flirting with their own version of crack-up. The Dems are stalked by very similar contradictions, and face the same storm of popular disgust among once-loyal constituencies.

The 2016 election is shaping up as payback time in our crippled democracy. The people have discovered ways to express their long-smoldering contempt for the regular order. Power politics, they discover, can be both mischievously fun and also purposeful.

Bernie Sanders delivered that uplifting message again with his upset victory in the Michigan primary. The press had been hinting crudely that Senator Sanders should really give it up, so Hillary Clinton could proceed unblemished to the nomination. Bernie wisely ignored the media dopesters.

As I wrote a few months ago, Donald Trump has taken the low road to political upheaval, while Senator Sanders has taken the high road to peaceful revolution. But both candidates are addressing many of the same fundamental wounds and inequities that working Americans have experienced for a generation. Trump is foul and unfair, a shrewd demagogue. Bernie is the honest visionary, urging young people to take themselves seriously as citizens and claim their role in a “political revolution.”

Trump and Sanders are forcing the political system to confront some malignant deformities in American life that both parties have tried to ignore, because, in their different ways, both are to blame. People feel betrayed, abandoned by representative democracy in favor of powerful interests.

Year after year, political leaders and presidents of both parties essentially lied to the people about fundamental matters—war and peace, lost prosperity, and the bruising generation of lost jobs and declining wages. The big media mostly looked the other way. Prestige news outlets witlessly reported the deceitful reassurances that leading economists provided with their statistical flimflam.

Famous corporations, from General Electric and General Motors to Microsoft and Apple, cleverly exploited workers on both ends of the global economy, from Mexico to China. Yet it was a nonstory in the media, despite the distress cries of American workers and the scandalous death-trap factories overseas, where workers (usually young women and girls) made shirts and shoes and semiconductor chips. Both parties in Congress signed off on trade agreements backed up by phony job predictions from so-called Washington think tanks like the Brookings Institution, the Peterson Institute, the Business Roundtable, and the American Enterprise Institute.

Lies, lies, lies. Yes, Donald Trump tells lots of lies himself, but they seem modest alongside the monstrous deceptions that Democrats and Republicans used to mislead the country into the multinational betrayal. Not just the unfair trade rules that favored foreign producers, but the recurring scam of tax cuts for the wealthy, who were supposed to create products and lots more jobs.

A little honest reporting would have discovered that other major industrial economies, like Germany or Sweden, do globalization differently: They disperse low-wage jobs to poorer nations, but they hang on to the best, high-end production that generates advanced jobs and higher wages. But Apple and Intel and many other US multinationals decided that it makes sense to manufacture new products in places like China, where the workers are cheaper.

A few brave voices in American industry, like Ross Perot, told the truth. A quarter-century ago, he tried to warn folks that “the giant sucking sound” of NAFTA was going to wipe out millions of American jobs, and others cautioned against the regressive tax cuts and financial deregulation that created the billionaire class of 1 percenters. Perot was ridiculed by Bill Clinton and Al Gore—both smart guys, bold “New Democrats” who were shifting their party’s core loyalty from working people to Wall Street.

I have been among the stubborn dissenters who never drank the Kool-Aid. For decades, I wrote critically about this tragic wrong turn in American politics. My book on globalization, One World, Ready or Not: The Manic Logic of Global Capitalism (1997), warned that the loss of US manufacturing and broad prosperity would lead to worldwide breakdown—a global economy based on cheap labor. The crisis arrived because the world has too many factories but not enough consumers with the incomes to buy the stuff.

I used to needle political and economics reporters I knew at The Washington Post, The New York Times, and The Wall Street Journal. Why, I asked them, don’t you write about the destructive forces dismantling the American middle class? Or at least give us honest coverage of labor’s arguments for global reforms to reverse the “race to the bottom.” A typical response was “that’s not my beat.” Noteworthy columnists assured us that American workers would improve their incomes if they went to graduate school.

The blindfolded media continue to mislead the public. The Republican establishment portrays itself as an innocent victim of Trump’s raw slurs and bigotry. Economists associated with the Clinton-Obama wing of the Democratic Party (led by Paul Krugman) are busy explaining why Bernie’s reform vision of national health insurance is impossibly expensive. They do not explain how European nations manage to afford universal healthcare that is far less expensive than ours. The US is exceptional, as in Uncle Sucker.

The media bias continues. Listen to current commentary or read leading newspapers, and you will see reliance on the same “experts” who led cheers for the New Democrat policies that helped wreck US prosperity. They attack Trump’s ugly qualities, but they also disparage rebellious public opinion as foolish.

In The Washington Post, the neocon Robert Kagan of Brookings attacked Trump as the “GOP’s Frankenstein’s monster” but belittled economic complaints. “We are supposed to believe that Trump’s legion of ‘angry’ people are angry about wage stagnation,” he wrote. “No, they are angry about all the things Republicans have told them to be angry about these past 7 1/2 years.”

I have a hunch the academic experts and political junkies are once again missing the real story. I suggest that with misplaced arrogance and a few wrong turns, the Democratic Party could find itself obliterated by this election. I wouldn’t bet my mortgage on it, but this is a sequence of events I find plausible:

First, let’s assume that Trump succeeds in securing the Republican nomination and Clinton wins the Democratic race. Sanders retires gracefully so he will not be labeled a spoiler, as Ralph Nader was when Gore lost in 2000.

Then, in the fall campaign, Trump changes his style and launches a ferocious and substantive assault on Clinton, with devastating effect. He does this essentially by taking over the Sanders economic agenda. He denounces HRC as a tool of wealthy plutocrats and speaks for working-class discontents, much as he has done in the primary season. He piles on the ugly personal slurs, but his central thrust becomes more grown-up and closely argued. Indeed, one can already observe Trump moderating his tone, edging toward a more “presidential” performance. Imagine a campaign that merges Bernie’s straight-talk values with traditional Republican values. If so, this could alter the profile of both parties, at least for the 2016 election. It could even define longer-term changes.

When I asked a veteran strategist of left-wing reform politics what he thought, he agreed that such a repositioning is most likely if Trump runs against HRC. “Trump will be the peace candidate in this campaign,” he said. “Trump will be the anti–free trade candidate. The candidate for protecting Social Security and Medicare. For getting big money out of politics. For controlling drug prices.”

Trump may be too foul, too frightening, and too obnoxious for middle-class Americans. I hope that’s right, but I’m not so sure. It’s not a question of trusting the Donald’s self-promoting talk; the man lies with gusto. But cynics might ask, what else is new in big-time politics?

A Trump administration, I suspect, would deal with real power in ways that gravely betray his rhetoric. I note, for instance, that the business and financial establishments are more or less silent on Trump hysteria, neither denouncing nor making nice with him. I can imagine truly ugly deal-making that we would not hear about until afterward.

A more severe dilemma would confront Hillary. As the Michigan primary demonstrated, she’s not a convincing candidate on the heavyweight economic questions. Even when she makes strong proposals, many voters automatically ask: Can we trust her? She has surrounded herself with small-minded advisers from the Clinton years who are prone to making nasty counterattacks rather than developing genuinely far-reaching policy ideas.

One hallmark of Clinton politics is keeping outsiders out of the room. Left-liberal types were generally excluded during the Clinton years, and nearly so in Obama’s administration. The nation’s circumstances cry out for bold and radical departures from the past. So far, Hillary has mostly stayed with careful, baby-step gestures. She has only a few months to clean house and change all that. New Dems have passed their sell-by date.