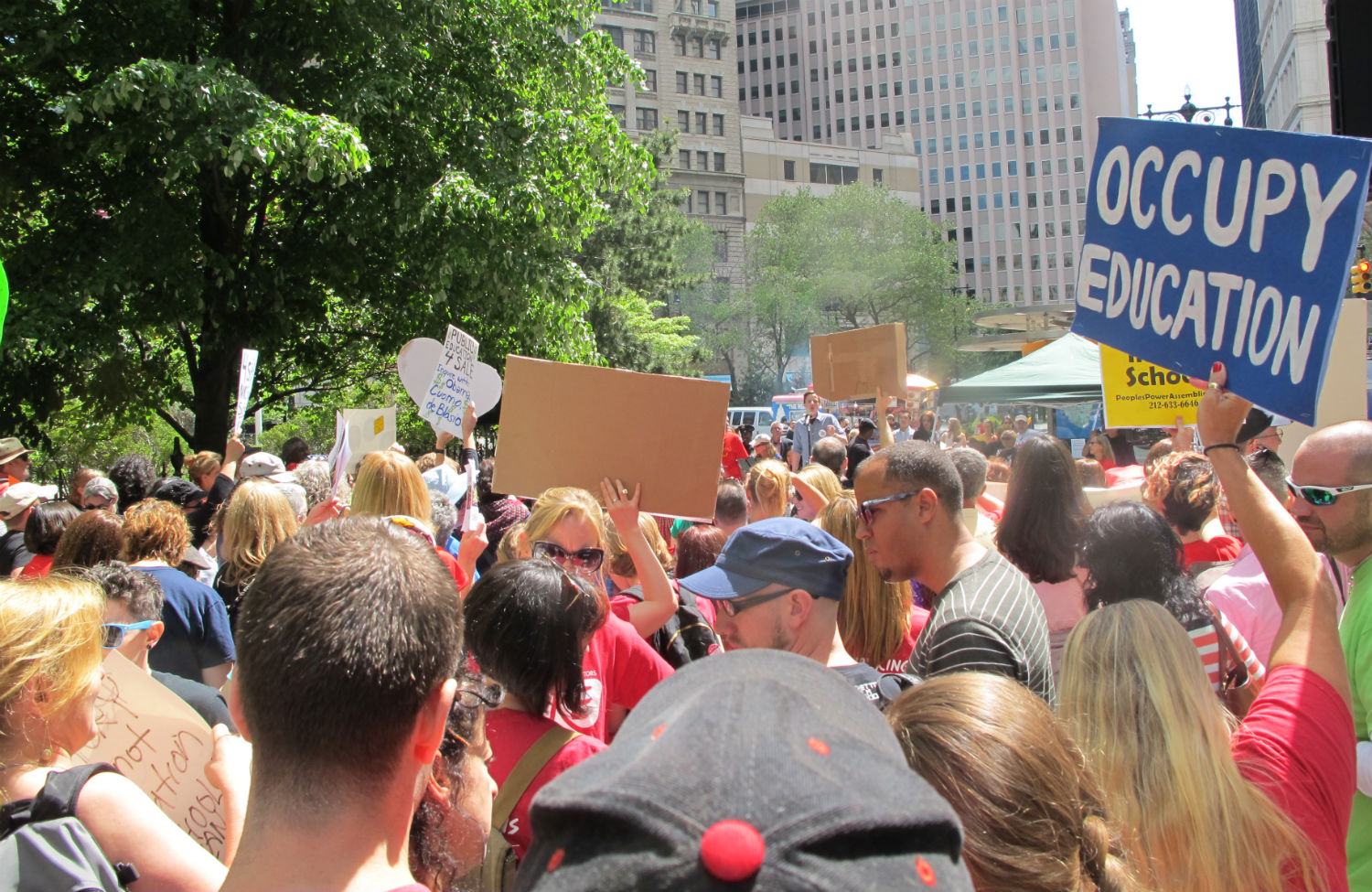 New York City is defined by its glorious pastiche of cultures, colors and creeds. But inside its public schools, life is far more homogenous, with black and brown students siphoned into under-resourced schools by a persisting color line. But some teachers are challenging the policies that systematically leave disadvantaged kids behind.

At a rally on Sunday at New York’s City Hall Park, teachers took the anniversary of the Brown v. Board court decision to call out lawmakers for “failing” students with school reforms that cheat them out of the opportunities they deserve.

The rally was part of Save our Schools, a national campaign led by activist teachers, parents and students, to build a more equitable public education system. New York’s branch of the movement has been led by the Movement of Rank-and-File Educators (MORE), a rank-and-file reform caucus in the United Federation of Teachers, together with other education advocates and community and labor organizations.

As teachers spoke of their frustration with standardized testing and deep underfunding of school facilities and staff, they gathered under the rallying cries of “Whose Schools? Our Schools!,” “My Teachers are More than a Test Score,” and “Occupy Education.”

Rosie Frascella, an English teacher at International High School at Prospect Heights in Brooklyn, told The Nation that the constant testing that has become ubiquitous in the city’s public schools—several exams crammed into three days—is driving her students, typically new immigrants who are working hard to learn English, into demoralization and anxiety.

“They’ve lost before they even walked into that room. It doesn’t matter what they learned. They’re already telling themselves, ‘I can’t,’ and they’re stressed. They want to throw up.” At the same time, she added, “they can write these amazing plays, and essays, which is more true to what happens in college, what happens in life…. I know that they can succeed in school, and that they can succeed in college, and their tests do not match what they’re doing.”

Frascella’s school recently helped organize a boycott of a new standardized English test used to assess teaching quality—part of a growing “opt out” movement against standardized testsaround the country. She doesn’t worry about potential retaliation or negative consequences for her professional ratings: “I believe in what I do in the classroom, and so I’m not so worried about how they’re gonna evaluate me,” she said. “But I’m worried about them. I’m worried about their self-esteem, I’m worried about them dropping out of high school… And I want to make sure that I’m in a position [where I’m not just] doing test prep, that I’m actually giving them the skills that they need to succeed.”

The ideological backbone of the high-stakes testing frenzy is a neoliberal school reform agenda backed by Silicon Valley philanthropists and the educational product industry. This marketized educational model that promises to close achievement gaps by managing schools like tech startups, measuring intellect with data and firing teachers deemed underperforming. Yet for all the hype around “innovation” and “standards,” schools remain plagued by racial and economic inequality that speak to the unfulfilled promise of Brown v. Board, sixty years on.

According to a new study from University of California-Los Angeles Civil Rights Project, New York State ranked among the highest in the country for its limited exposure of black and Latino students to white peers. These entrenched racial gaps reflect and perpetuate underlying social divisions:

Schools serving low-income and segregated neighborhoods have been shown to provide less challenging curricula than schools in more affluent communities that largely serve populations of white and Asian students. The impact of the standards and accountability era has been felt more acutely in minority-segregated schools where a focus on rote skills and memorization, in many instances, takes the place of creative, engaging teaching.

Struggling schools with high proportions of low-income students of color suffer from underfunded and dilapidated facilities, along with harsh disciplinary measures under oppressive school security systems. In such a climate of hostility and oppression, there’s hardly any safe space for intellectual exploration or self-expression. The stressful climate and neverending test prep leave teachers scant opportunity for real intellectual nurture, much less the kinds of projects wealthier kids take for granted, like independent research on mathematical patterns in architecture, or a critical dialogue on, say, the legacy of the civil rights movement.

Many progressive educators are wary of the boosterism surrounding charter schools, especially because many are geared toward “underperforming” poor Black and Latino communities. These are the schools that tend to be targeted for shutdowns because they are labeled “failing.” They’re also the schools that are being squeezed by the expansion of charters, which are known for hogging scarce facilities and resources in impoverished neighborhoods.

Brian Jones, a former teacher and now an activist and Green Party candidate, warned, “Our schools are more segregated than most in the nation, and it’s the charter schools and the privatization… that are causing that.” From an historical standpoint, he added, “We are literally fighting a civil rights battle, here. We are literally fighting in the footsteps of people who tried to figure out a way to end a system of separate and unequal education.”

Mainstream reform advocates often accuse teacher unions of coddling bad teachers and resisting academic innovation. But at Sunday’s rally, there was little talk of bureaucracy and contract terms. Teachers instead called for a liberation of the curriculum.

And this is where the projects of racial integration, academic advancement and labor rights converge.

Math teacher José Vilson sees segregation in the city’s public schools as a problem not only of racial disparities, but of a learning environment in which children can’t connect academic concepts to the world they deal with everyday. That hinders them from identifying themselves as intellectual explorers.

“When I’m in the classroom, I try to give my students more of a voice, and then I try to teach them how to use that voice,” he said. As the author of a book on the craft of teaching in black and Latino communities, he doesn’t discount the value of hard work, but ultimately, he said, “I’m trying to give my students some access, so that they can broaden their horizons. They don’t have to just go from school to—in some of my cases—prison. It doesn’t have to be that pipeline. It could be school to college, school to whatever your dream is… I don’t always have all the resources I like, of course, as an NYC public school teacher. But the one thing I do is try to integrate [into the program] a curriculum that matters.”

So what does a curriculum that matters look like? One instructional model championed by progressive education advocates, including Save Our Schools, MORE, and the local pedagogical radicals Teachers of Conscience, would center coursework on collaborative projects and portfolio assessments, which allows teachers more creative flexibility, and encourages children to undertake self-directed learning, not rote memorization. SOS calls for holistic programs that foster “appreciation of diverse cultural and social traditions” and “aptitudes in all areas of human experience (music, fine art, physical arts, technology, etc).”

Contrary to the reformers’ demonization of teacher unions as self-serving, demagogic bureaucracies, the coalition believes that “teachers’ working conditions are students’ learning conditions, and [opposes] the false idea that the interests of teachers and students are in opposition.”

At the rally at City Hall, the kids and the teachers were marching in lock step. It was the school system that was out of step—with their communities, and with the mandate of Brown v. Board.

The protesters marched toward the Department of Education headquarters, which were closed that day, so the march did not confront any education officials directly. But for the rank-and-file teachers, it was still a work day.

Despite the stresses of the job, Frascella said, “I still love teaching. And I have to love teaching. And if I don’t love what I’m doing, then I’m leaving…. It’s all about building relationships and teaching things that you love. And you have to resist the test, because you know that that’s gonna make them hate schooling, and it’s gonna make you hate your job.”