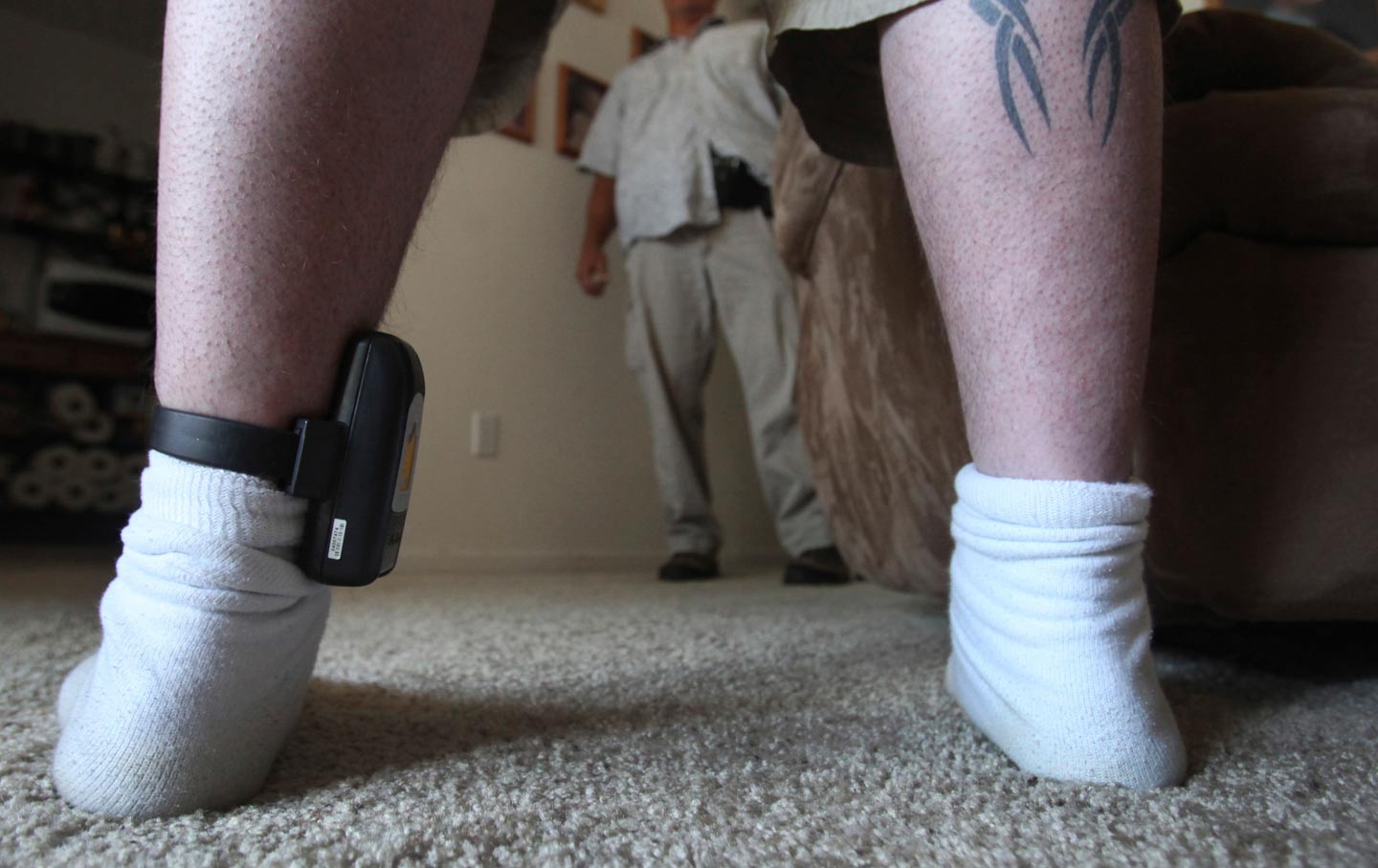 A California parolee wears a GPS tracking device on his ankle as he speaks to his parole officer. (AP Photo / Rich Pedroncelli)

With one in 45 adults on probation or parole and one in 100 behind bars, America looks like a nation of captives. From a business perspective, though, it’s a captive market.

Yet prison reform is gaining political currency. Both Republican and Democratic federal and state lawmakers have sought to soften sentencing policies and reduce the overall use of incarceration in criminal policy, and to facilitate “second chances” for the formerly incarcerated as they transition into work and family life. Yet, while politicians ostensibly seek more humane alternatives to incarceration, those being released will never quite leave prison behind. Not just because individuals will bear criminal records, but because the entire prison industry has already captured their communities on the outside.

In other words, many of the dollars expected to be “saved” from shuttering prisons may simply be funneled into privatized “alternatives to incarceration” like parole programs and halfway houses. These operations are often run by the household names of the prison business—they’re simply moving from behind bars to the so-called “treatment-industrial complex.”

According to AFSC’s research, the corporatization of prison reform is an outgrowth of a long-standing trend of prison privatization—corrections authorities contracting to outsource services such as food or long-distance calls home. Efforts to “decarcerate” may ostensibly reduce some business for private prison-industry companies. But carceral institutions and technology are being rebranded for the outside world, and profits from these emerging “security” sectors appear to be on the upswing: There is growth potential in halfway houses and treatment centers—perhaps minimally regulated and financed on a per diem basis. In the pre-trial stage, there’s demand for private probation (used in poor communities to coerce people owing fees and fines for petty infractions) and ankle-bracelet monitors (shackled to thousands of detained migrants who have been released on bond).

But contrary to the rhetoric of privateers, private prison is a dirty business. Prison giants like Corrections Corporation of America are notorious for cost overruns, inadequate staff training, and abusive conditions. Meanwhile, the underlying structural injustice lies in the basic business model of profiting from oppression.

The AFSC argues, “The profit motive is inherently at odds with the stated purpose of ‘corrections’” because contractors “are financially dependent on the growth of supervised populations, providing a perverse incentive not to rehabilitate.”

While prison alternatives are billed as “cost-efficient” compared to conventional incarceration, particularly by conservatives, Dalit Baum, director of AFSC’s Economic Activism Program, warns that “the talk about reducing costs is what got us into problem to begin with, which is privatization.” But, she adds, the unforeseen collateral damage—recidivism, abuse, and economic losses for communities—should serve as an object lesson that the incarceration system can’t be relied on to remedy the social ills that prison produces.

Ethical questions may also surround prison-related rehabilitation services. For example, many convicted on drug charges undergo mandatory regimented therapy. While treatment is favorable to strict incarceration, radical anti-prison activists say such programs, sometimes steeped in rhetoric of “personal responsibility” and self-discipline, tend to promote conformity and undermine the potential for solidaristic activism. Could imposing corporate-controlled rehab ultimately discourage the treatment population from developing an organic political consciousness? Should rehabilitation be rooted in communities, or managed by a company that prioritizes obedience over social action?

Democratic governance is also eroded by the prison service industry’s invasion of the public sector, AFSC argues. If the justice system is to operate in the public interest, Baum says, “we do believe that it is the state’s authority and very, very grave responsibility to deal with the justice system, that it should not be given to the hands of profiteers.”

Another area where the prison-linked industries will continue to profit is more indirect—the unique role of large corporations as a liaison between the mainstream economy and the political economy of prisons; they monopolize business within and outside the prison gates.

Consider the multinational 3M, maker of Post-Its and surveillance technology. An incarcerated person may be surveilled at his facility constantly by taxpayer-funded 3M tracking devices. He might manufacture license plates in prison factories, which are supplied by 3M’s reflective coatings. Post-release, if he manages to pass the background check, he might land a job at a 3M warehouse, joining a workforce infamous for its links to the prison-industrial complex as well as labor and environmental violations in the mainstream economy. And both in and out of prison, the company extracts profits from commercialized social control.

On principle, reducing incarceration is necessary and just. But some activists fear private-sector solutions might pervert prison reform into a neoliberal variation of convict leasing, in which industry and state collude to “redeem” society’s undesirables. If the price of “reentry” is a softer state of unfreedom, the formerly imprisoned remain bonded to a hegemony of state and corporate control. And as consumers and workers, they’re still locked into a “free-market” economy that perpetuates capitalizing on repression.

“Living in capitalism as we do, we often do feel like there’s very little for us to do against big corporations and big systems of control like this,” Baum says. But now that there is political momentum for a policy overhaul, “our responsibility as activists is to use this moment of opportunity in order to propose some real alternatives.”