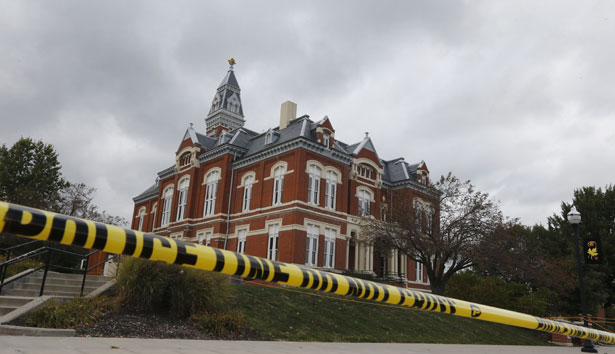 Your 14-year-old daughter is dumped on your freezing front lawn in a state of chemically induced incoherence with her shoes off and frost stuck in her hair. She tells you she was raped. You hear her 13-year-old best friend was also raped that same night. Your daughter is then bullied as a tape of the incident passes around her high school. You wait for the indictments and some semblance of justice, but they dissipate, as one of the accused is a football star from one of the area’s most prominent and politically connected families. The county prosecutor drops the charges, stating that your family is refusing to cooperate even though you are begging to be heard. Then it gets worse.

You are fired from your job without warning and the violent threats against your family through social media increase. You have to pick up your family and leave town. After your departure, your house is burned to the ground. But you refuse to be intimidated.

A public outcry develops, spurred by the decision of your family to come forward and speak out. Now, eighteen months after the incident, a special prosecutor is looking into the case.

This is the story of Melinda Coleman, her daughter, Daisy, her friend Paige, and Daisy Coleman’s alleged rapist, Matthew Barnett, the grandson of a longtime member of Missouri’s House of Representatives.

There are other young men as well who are under scrutiny: athlete Jordan Zech, who allegedly filmed the assaults, and a 15-year-old whose name we do not know—who admitted to police that 13-year-old Paige “said no” several times, yet he refused to stop.

I do not know how Melinda Coleman has had the wherewithal to go public, be strong, and even have to serenity to say, in advance of a demonstration called for her family, “I do not condone violence in our defense I don’t want others terrorized as we have been.”

I am amazed by the composure of the now 16-year-old Daisy Coleman, choosing to go public, standing up for herself and writing essays online where she shares:

I sat alone in my room, most days, pondering the worth of my life.{… I burned and carved the ugly I saw into my arms, wrists, legs and anywhere I could find room. On Twitter and Facebook, I was called a skank and a liar and people encouraged me to kill myself. Twice, I did try to take my own life.

Yet I am the most stunned that here we are, six months after a similar case in Steubenville, Ohio, and still not talking openly about the connective tissue between jock culture and rape culture.

According to the Campus Safety Magazine website, in their statistical analysis:

College men who participated in aggressive sports (including football, basketball, wrestling and soccer) in high school used more sexual coercion (along with physical and psychological aggression) in their college dating relationships than men who had not. This group also scored higher on attitudinal measures thought to be associated with sexual coercion, such as sexism, acceptance of violence, hostility toward women and rape myth acceptance.

But forget the studies. The jock culture/rape culture dynamic should be obvious to anyone with any connection to organized sports. I saw it on the teams on which I played and I saw it on the team’s I’ve covered. I’ve heard the stories from athletes I’ve interviewed and from women with detailed descriptions of rape that go unpunished if someone with sports-related status is accused. I have seen it in the story of Lizzie Seeberg and the ways people still pretend that Notre Dame football is a bastion of morality.

The fact is that too many young male athletes are taught to see women as the spoils of being a jock. These young men are treated like gods by the adults who are supposed to be mentoring them—like cash cows by administrators who use their on-field exploits to extract money from politicians and alums.

No, I am not arguing that a majority of young men who play sports become people who engage in sexual assault. But hell, yes, I am arguing that in most male team sports, athletes are conditioned to look the other way if they see an assault about to take place. It is the exception when a teammate stands up at a party and says, “This cannot happen.” To take it even further, it the exception, for anyone, male or female, at a jock party to do the same.

The Nation is facing a crippling postal rate hike—donate by Oct. 31st to help us foot this $120,272 bill.

The most distressing detail in the many articles I have read about Maryville was the story of a young girl at the high school who wore a homemade shirt when charges were not filed against Mr. Barnett. It read “Matt—1, Daisy—0”. To her, it was a sports score, a pep rally and just a big game. It’s time to change the game. Jock culture left to its own devices is rape culture. If you are a coach or parent not trying to intervene in this culture to teach young men to not rape, then you are doing everyone a grave disservice. Talk to other coaches. Bring in speakers. Seek out curriculum. Be someone who uses sports to actively build a movement against rape culture. To do nothing is to just ensure more Steubenvilles, more Torringtons and more Maryvilles to come. Not everywhere will have survivors willing to be as public as Daisy Coleman. But you can be a hero now by walking into your locker room and standing up to this shit today.

Jessica Valenti looks at how journalists should write about rape.