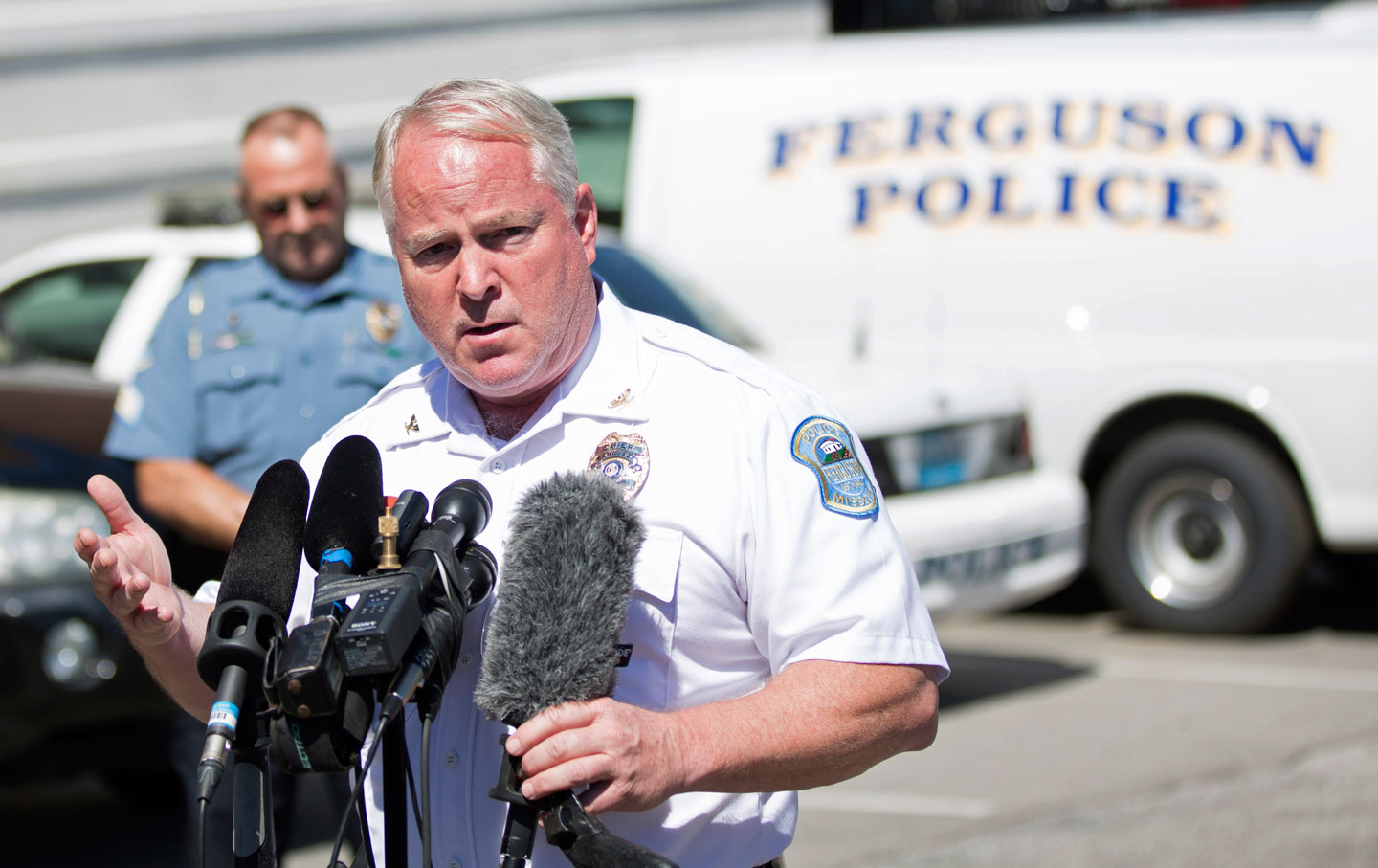 More than seven years ago, a black woman parked her car illegally in Ferguson, Missouri. She received two tickets and a $151 fine. The woman, sometimes homeless, struggled to pay it off, and over the next several years she was slapped with seven “Failure to Appear” citations for missing payments and court dates. Each of those citations added to the debt she owed the city and resulted in an arrest warrant. By 2014, she’d been arrested twice, spent nearly a week in jail, and had paid the city $550. As of December, she still owed $541.

“Inexplicable,” is how Attorney General Eric Holder summed up her story at a press conference on Wednesday, at which he unveiled the Department of Justice’s long-anticipated report on the Ferguson police department and municipal court. The report affirms what residents have long said: that officers routinely profile citizens based on their race and violate their constitutional rights. Critically, the report addresses the roots of the police force’s discriminatory practices. Not simply the fault of racist cops, the DoJ asserts, they stem from the way the city preys on residents financially, relying on the fines that accompany even minor offenses to balance its budget.

The report traces the pattern of racial bias from traffic stops to arrests to the courtroom and, finally, to a cycle of incarceration and indebtedness. Black residents make up about 67 percent of the Ferguson population. According to the DoJ, they experienced 85 percent of all traffic stops, 90 percent of citations, 88 percent of incidents in which an officer used force, and 93 percent of all arrests. They received almost all of the citations for petty crimes like jaywalking. Black drivers were twice as likely to have their cars searched as whites, yet significantly less likely to actually have drugs or other contraband. Of the people who spent two or more days in in the city jail, 95 percent were black.

Overt, grotesque racism among city officials underlies these statistics. The report includes a handful of e-mails between police and municipal court officials that contain derogatory language, such as a November 2008 message stating that President Obama would not be in office long because “what black man holds a steady job for four years.” Another, from 2011, contained a photo of a group of women dancing topless and “apparently in Africa” with the caption, “Michelle Obama’s High School Reunion.”

But a subtler, systemic pressure also encourages over-policing in Ferguson: the way that the city relies on the fines levied on violators to fund itself. “Officers appear to see some residents, especially those who live in Ferguson’s predominantly African-American neighborhoods, less as constituents to be protected than as potential offenders and sources of revenue,” states the report. This year the city expects to raise $3.09 million of projected $13.26 in revenue from fines and fees, which it levies wherever possible. An unmowed lawn, for instance, costs Ferguson residents between $77 and $102, though in some other cities it’s a $5 offense.

Not surprisingly, DoJ found that the city “exhorts” police to maximize revenue via stops, citations, and arrests, and in some cases punishes them for failing to meet targets. In 2010, for example, Ferguson’s finance director wrote to the police chief that “unless ticket writing ramps up significantly before the end of the year, it will hard to significant raise collections next year…. it’s not an insignificant issue.” Each unpaid fine generates other fees and often arrest warrants; in effect, it is poverty that’s punished.

Hunger for revenue influences how officers act, resulting in excessive uses of force—with Tasers and dogs—,violations of free speech and unreasonable stops or arrests, according to the DoJ. It has also made the police a “collection agency” for the municipal court, and in turn transformed the courtroom into a shakedown site, where the due process and equal protection clauses of the Fourteenth Amendment are abandoned, particularly in cases involving black residents. The court “primarily” uses its authority to “advance the City’s financial interest,” not to advance justice, the DoJ found. The police, meanwhile, use arrest warrants not to protect public safety but as the primary means of collecting outstanding fines.

None of this is particularly surprising to people who’ve come into contact with the criminal-justice system in the St. Louis region. “Municipal courts in this area have always been revenue producers,” said Brendan Roediger, who directs a legal clinic at the St. Louis University School of Law. “It means that bad policing pays off.” Most of the roughly ninety municipalities in St. Louis County have their own courts, which operate part-time and, Roediger says, function much like Ferguson’s: for the purpose of balancing budgets. The town of St Ann, just a few miles east of Ferguson, lost its shopping mall in 2010, and the associated tax dollars. Since then revenue from citations has shot up, from $500,000 to $3.5 million from traffic tickets and fines alone, according to one estimate.

According to Radley Balko of The Washington Post, some towns in St. Louis County collect 40 percent or more of their revenue from fines levied by their municipal courts for petty violations. The town of Bel-Ridge (population 2,700, and more than 80 percent black), for example, was projected to collect an average of $450 per household in municipal court fines in 2014, making those fees its largest source of revenue. That money gets pumped right back into the system; $25,000 goes to the prosecuting attorney for the twelve hours they spend in court each month.

“One of the big fears I have about the DoJ’s report is that it’s going to isolate Ferguson, just because that’s what their purview was, but it’s going to ignore the fact that this is going on in ninety other towns in our region, and in many states in America,” said Thomas Harvey, executive director of the legal aid group Arch City Defenders. “This cycle of being stopped, ticketed, fined and jailed is so pervasive for black people in our region that many folks can’t tell you how many times they’ve been jailed on unpaid fines.” He continued, “I’m not exaggerating when I say that people are literally held in these jails and extorted for monetary payments on a daily basis until they’ve tapped out their friends, their families, everything they’ve got in order to get out.”

Harvey and Roediger think the municipal courts should be dissolved, and the cases turned over to circuit courts. The long list of recommendations for reforms included in the DoJ’s report do not go that far, although the agency did suggest that city reduce fines, develop alternative payment plans, and stop jailing people for failing to pay fines, among other things.

“Nothing is off the table,” Holder warned Ferguson officials during the press conference, noting that although the recommendations are voluntary, his department reserves the right to intervene to protect the constitutional rights of Ferguson’s residents. He nodded to the wider geography of the issue, saying that the DoJ would also work with “surrounding municipalities” to reform their law enforcement practices. It’s “the underlying culture” of the police department and the court system that need to change, he said. As the DoJ’s report shows, the underlying economics need changing, too.