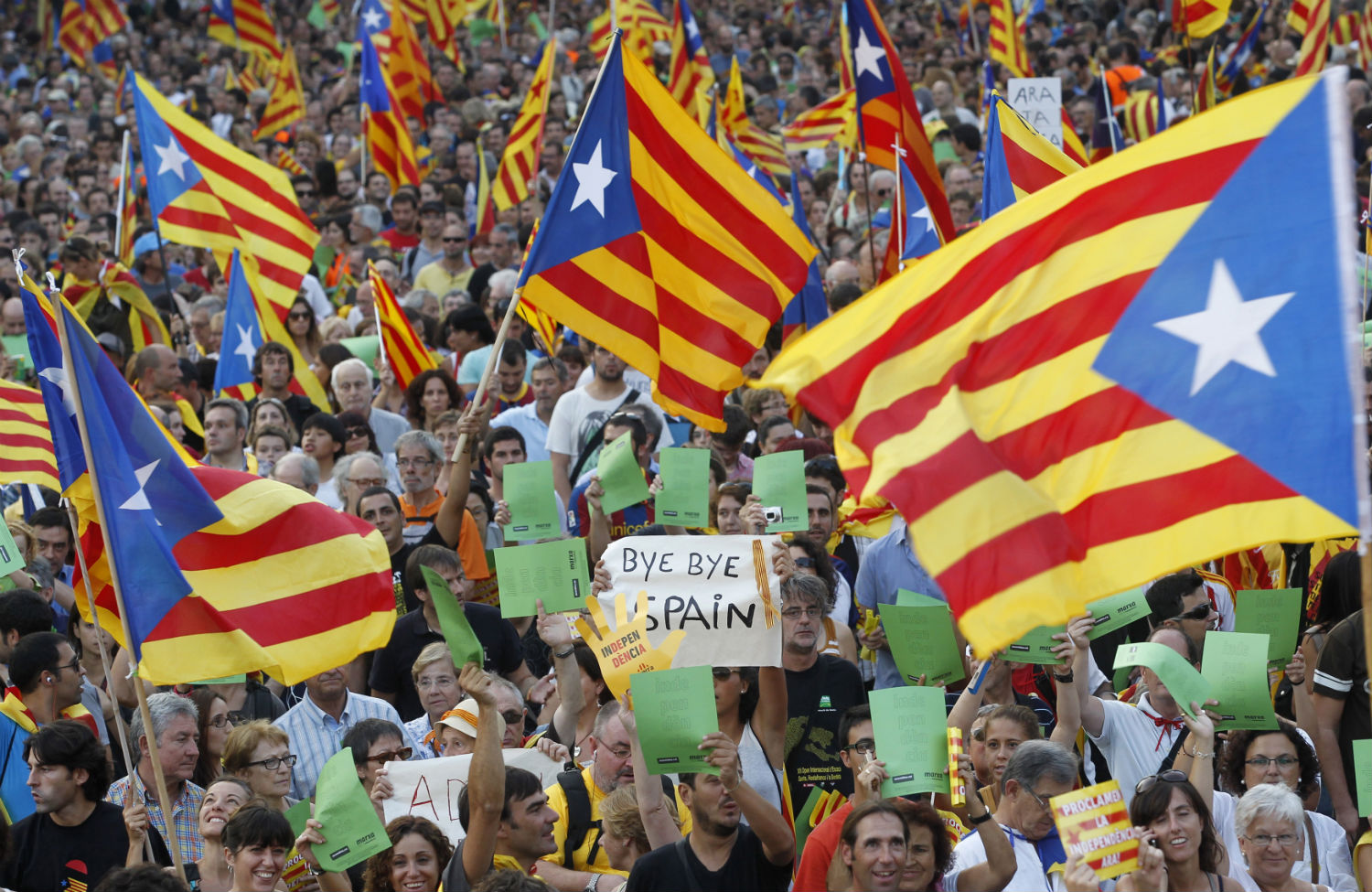 Happy families are all alike: every unhappy family is unhappy in its own way.
—Leo Tolstoy, Anna Karenina

The opening to Tolstoy’s great novel of love and tragedy could be a metaphor for Europe today, where “unhappy families” of Catalans, Scots, Belgians, Ukrainians and Italians contemplate divorcing the countries they are currently a part of. And in a case where reality mirrors fiction, they are each unhappy in their own way.

While the United States and its allies may rail against the recent referendum in Crimea that broke the peninsula free of Ukraine, Scots will consider a very similar one on September 18, and Catalans would very much like to do the same. So would residents of South Tyrol, and Flemish speakers in northern Belgium.

On the surface, many of these secession movements look like rich regions trying to free themselves from poor ones, but while there is some truth in that, it is overly simplistic. Wealthier Flemish speakers in northern Belgium would indeed like to separate from the distressed, French-speaking south, just as Tyroleans would like to free themselves of poverty-racked southern Italy. But in Scotland, much of the fight is over preserving the social contract that conservative Labour and right-wing Tory governments have systematically dismantled. As for Catalonia—well, it’s complicated.

Borders in Europe may appear immutable, but of course they are not. Sometimes they are changed by war, economic necessity or because the powerful draw capricious lines that ignore history and ethnicity. Crimea, conquered by Catherine the Great in 1783, was arbitrarily given to Ukraine in 1954. Belgium was the outcome of a congress of European powers in 1830. Impoverished Scotland tied itself to wealthy England in 1707. Catalonia fell to Spanish and French armies in 1714. And South Tyrol was a spoil of World War I.

In all of them, historical grievance, uneven development and ethnic tensions have been exacerbated by a long-running economic crisis. There is nothing like unemployment and austerity to fuel the fires of secession.

The two most pressing secessionist movements—and the ones most likely to have a profound impact on the rest of Europe—are in Scotland and Catalonia.

Both are unhappy in different ways.

Scotland always had a vocal, albeit marginal, nationalist party, but was traditionally dominated by the British Labour Party. The Conservatives hardly exist north of the Tweed. But Tony Blair’s “New Labour” record of spending cuts and privatization alienated many Scots, who spend more on their education and health services than the rest of Britain. University tuition, for instance, is still free in Scotland, as are prescription drugs and home healthcare.

When Conservatives won the British election in 2010, their austerity budget savaged education, healthcare, housing subsidies and transportation. Scots, angered at the cuts, voted for the Scottish National Party in the 2011 elections for the Scottish parliament. The SNP immediately proposed a referendum that will ask Scots if they want to dissolve the 1707 Act of Union and once again be an independent country. If passed, the Scottish government proposes re-nationalizing the postal service and throwing Britain's nuclear-armed Trident submarines out of Scotland.

If one takes into account its North Sea oil resources, there is little doubt that an independent Scotland would be viable. Scotland has a larger GDP per capita than France and, in addition to oil, exports manufactured goods and whiskey. Scotland would become one of the world’s top thirty-five exporting countries.

The Conservative government says that if the Scots vote for independence, they will have to give up the pound as a currency. The Scots respond that if the British follow through on their currency threat, Scotland will wash its hands of its portion of the British national debt. At this point, there is a standoff.

According to the British—and some leading officials in the European Union—an independent Scotland will lose its EU membership, but that may be bluster. For one, it would violate past practice. When East and West Germany were united in 1990, some 20 million residents of the former German Democratic Republic were automatically given EU citizenship. If 5.3 million Scots are excluded, it will be the result of pique, not policy. In any case, with the Conservatives planning a referendum in 2017 that might pull Britain out of the EU, London is not exactly holding the high ground on this issue.

If the vote were taken today, the Scots would probably vote to remain in Britain, but sentiment is shifting. The most recent poll indicates that 40 percent will vote for independence, a 3 percentage-point increase from the previous poll. The “no” votes have declined by 2 percentage points, to 45 percent, with 15 percent undecided. All Scottish residents over the age of 16 can vote. Given the formidable campaigning skills of Alex Salmond, Scotland’s first minister and leader of the SNP, those are chilling odds for the London government.

Catalonia, wedged up against France in Spain’s northeast, has long been a powerful engine for the Spanish economy, and a region steeped in historical grievance. Conquered by the combined armies of France and the Spain in the War of the Spanish Succession (1701-1714), it was also on the losing side of the 1936-1939 Spanish Civil War. In 1940, triumphant fascists suppressed the Catalan language and culture and executed Catalonia’s president, Lluis Companys—an act no Madrid government has ever made amends for.

Following Franco’s death in 1975, Spain began its transformation to democracy, a road constructed by burying the deep animosities engendered by the Civil War. But the dead stay buried only so long, and a movement for Catalan independence began to grow.

In 2006 Catalonia won considerable autonomy, which was overturned by Spain's Supreme Tribunal in 2010 at the behest of the current ruling conservative People’s Party (PP). That 2010 decision fueled the growth of the Catalan independence movement, and in 2012 separatist parties in the province were swept into power.

Prime Minister Mariano Rajoy’s PP is pretty much an afterthought in Catalonia, where several independence parties dominate the Catalan legislature. The largest of these is Province President Artur Mas’s Convergencia i Unio (CiU), but the Esquerra Republicana de Catalunya (ERC) recently doubled its representation in the legislature.

That doesn’t mean they agree with one another. Mas’s party tends to be centrist to conservative, while the ERC is leftist and opposed to the austerity program of the PP, some of which Mas has gone along with. The CiU’s centrism is one of the reasons that Mas’s party went from sixty-two seats to fifty in the 2012 election, while the ERC jumped from ten to twenty-one.

Unemployment in Spain is officially at 25 percent—but far higher among youth and in the country's southern provinces—and the left has thrown down the gauntlet. Over 100,000 people marched on Madrid last month demanding an end to austerity.

Rajoy—citing the 1976 Constitution—refuses to allow an independence referendum, a stubbornness that has only fueled separatist strength. This past January the Catalan parliament voted 87 to 43 to hold a referendum, and polls show a majority in the province will support it. Six months ago, a million and a half Catalans marched in Barcelona for independence.

The PP has been altogether ham-fisted about Catalonia and seems to delight in finding things to provoke Catalans: Catalonia bans bull fighting, so Madrid passes a law making it a national cultural heritage. The Basques get to collect their own taxes, Catalans cannot.

How would the EU react to an independent Catalonia? And would the central government in Madrid do anything about it? It is hard to imagine the Spanish army getting involved, although a former minister in the Franco government started Rajoy’s party, and the dislike between Madrid and Barcelona is palpable.

There are other fault lines on the continent.

Will Belgium split up? The fissure between the Flemish-speaking north and the French-speaking south is so deep it took eighteen months to form a government after the last election. And if Belgium shatters, does it become two countries or get swallowed by France and the Netherlands?

In Italy, the South Tyrol Freedom Party (STFP) is gearing up for an independence referendum and pressing for a merger with Austria, although the tiny province—called Alto Adige in Italy—has little to complain about. It keeps 90 percent of its taxes, and its economy has dodged the worst of the 2008 meltdown. But some of its German-Austrian residents are resentful of any money going to Rome, and there is a deep prejudice against Italians—who make up 25 percent of South Tyrol—particularly among those in the south. In this way, the STFP is not very different from the racist, elitist Northern League, centered in Italy’s Po Valley.

It is instructive to watch the YouTube video on how borders in Europe have changed from 1519 to 2006, a period of less than 500 years. What we think of as eternal is ephemeral. The European continent is once again adrift, pulling apart along fault lines both ancient and modern. How nations like Spain and Britain, and organizations like the EU, react to this process will determine if it will be civilized or painful. But trying to stop it will most certainly cause pain.