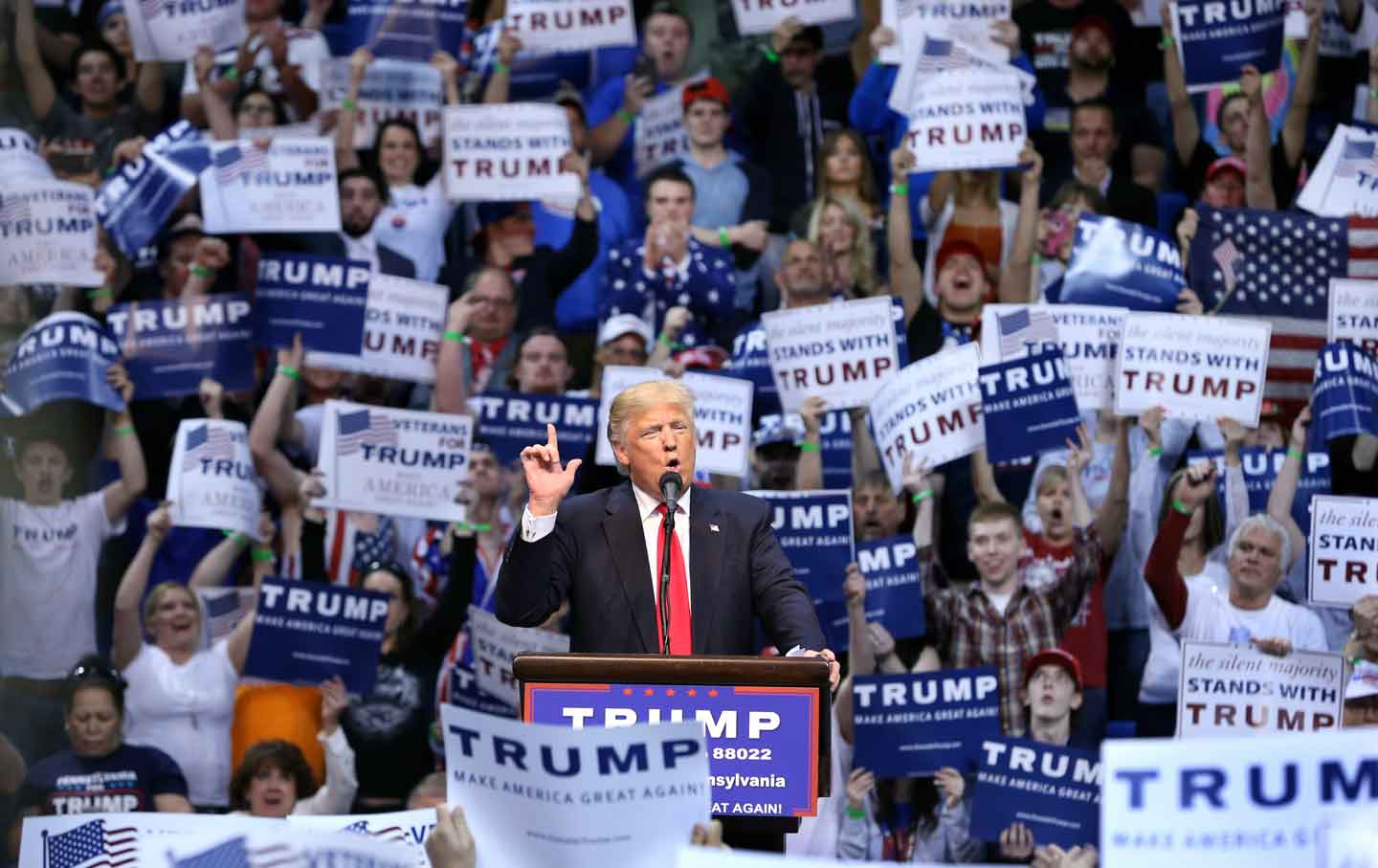 One thing everyone knows is driving the Donald Trump phenomenon is demographic change. White Americans are on the verge of losing their majority status and becoming just one of many racial groups, albeit still the largest (for a while, anyway). The ball isn’t expected to drop on this new era until around 2042, yet to many Americans, it feels as though that day is here, especially given the symbolism of the election of Barack Obama almost eight years ago. Trump’s slogan, “Make America Great Again,” resounds for a disproportionate number of fearful white people who see themselves as a minority and want their dominance back.

Public Religion Research Institute director Robert Jones explains why some of them are right to believe that the future is already here. Here’s something you may not know: During the Obama administration, the age of what Jones calls “white Christian America” officially passed. Its mourners are actually not imagining things. In 2008, 54 percent of the country was white and Christian. By 2015, that number had dropped to 45 percent, making them a minority of Americans after more than two centuries of dominance. In his provocative new book, The End of White Christian America, Jones writes a respectful obituary that doesn’t spare tough criticism of the flaws of the majority whose time has gone. He shows how much the project of white Christian Americans has involved exclusion, yet tries to point a way for its most stubborn, backward-looking adherents to see themselves as part of a multiracial, multi-religious democracy nonetheless.

One reason, of course, for the decline of white Christian America is demographic change—not just immigration but also faster growth rates among non-white groups. But another major factor, Jones shows, is “young white people leaving religion in droves.” While that was once only a problem for “mainline” Protestant groups—Episcopalians, Presbyterians, Methodists, and some others—it has lately become a big problem for evangelical Christians. In the 1980s, as mainline denominations’ membership declined, conservative evangelicals built their mega-churches and felt theologically and socially vindicated: The mainline orders had gone all in with secularism and liberalism and participated in their own diminishment, they believed.

Now evangelicals have to explain their own decline, especially among young people. While 27 percent of Americans over 65 are white evangelical Protestants, only 10 percent of millennials are—the exact same percentage as white mainline Protestant millennials. In PRRI surveys, those young white evangelicals overwhelmingly say they’re fleeing their childhood religion because of its intolerance, especially on issues of sexual identity and gay marriage.

Jones makes clear that the decline of his people—he’s a Baptist with deep roots in Georgia—is largely the result of decisions and definitions made by the leaders of white Christian America over the last 200 years. For one thing, this Irish Catholic reader learned with a twinge that I’m not counted within the historical conception of white Christian America: rejecting Catholicism as a foreign threat to American identity has been a pillar of white Christian belief since the 1800s, and it remains one. Of course, I know that history; I wrote about it at length in my book. It just didn’t occur to me that the definitional barrier remained (Jones had to break it to me in a phone interview).

Jones does not mince words about the way white Christian America has made “white” essential to its self-definition.

Likewise, if you added in black, Latino, or Asian Protestants, the demographic power of “Christian America” would soar. Those groups’ numbers, and adherence to Christianity, are rising, not falling. But Jones does not mince words about the way white Christian America has made that modifier “white” essential to its self-definition. Nor does he hesitate to show the way racism—support for slavery, Jim Crow, and white supremacy—has shadowed the positive moral contributions of white Christians, going back almost to the country’s founding.

White Christian churches gave scriptural justification for slavery—or for tolerating it as a realm of Caesar’s they could ignore. In the South, after desegregation became law, churches began to sponsor “Christian schools” in which religion provided a cover for white parents to avoid educating their kids with black children. In fact, the Christian right grew to its greatest strength when foes of abortion and gay rights, many of them Catholic, made common cause with Southern evangelicals, whose primary driving issue was maintaining that network of tax-exempt, segregated Christian schools, as well as colleges like Bob Jones University, after President Jimmy Carter moved to take away their tax-exempt status.

“I was trying to get people interested in [abortion, school prayer, or the proposed Equal Rights Amendment to the Constitution] and I utterly failed,” Jones quotes New Right pioneer Paul Weyrich. “What changed their mind was Jimmy Carter’s intervention against the Christian schools, trying to deny them tax-exempt status on the basis of so-called de facto segregation…. It was not the other things.”

Mainline Protestants had a better record on race, going back to the abolitionist movement (although some denominations split between North and South during the Jim Crow era). The venerable National Council of Churches was an enthusiastic supporter of the civil-rights movement, helping to sponsor the Montgomery bus boycott of 1955 as well as the 1963 March on Washington, and to push for rights legislation in Congress. The journal of mainline Protestantism, The Christian Century, published the Rev. Martin Luther King Jr.’s famous “Letter from a Birmingham Jail,” which specifically excoriated even the city’s “liberal” religious leaders for counseling a go-slow approach to desegregation. King later became a contributing editor.

Through today, a less influential NCC has spoken out on the recent killings of black men at the hands of police, including Michael Brown, Eric Garner, and Freddie Gray. Not surprisingly, some Southern evangelicals have been less sympathetic, with the Rev. Franklin Graham, far more conservative than his father Billy, opposing the Black Lives Matter movement and telling African Americans to “listen up” and obey police officers instead of protesting.

It’s no accident, then, that white evangelicals have become the Republican Party’s loyal base over the last 30 years. But as their numbers dwindle, the party, and the larger white Christian community, is imperiled. Parallel to the GOP’s official 2013 “autopsy,” which recommended that the party open itself to non-whites, especially Latinos, and play down its anti-LGBT stances in order to attract or keep young people, a number of evangelical churches have begun modernizing projects to reckon with their own history of exclusion and widen their appeal. In 1995, even the formerly pro-segregation Southern Baptist Council offered an apology for supporting slavery and opposing civil rights. Southern Baptist reformer David Gushee has pushed for evangelicals to tackle climate change, oppose torture, and finally embrace and accept the LGBT community. But those are still marginal crusades among evangelicals who don’t want to move into the future. Some denominations have pushed racial integration, and Jones spotlights some inspiring congregations in Atlanta, New York, and Jacksonville. Yet he admits that broader progress has been slow.

One obvious question Jones’s book raises, but doesn’t answer, is why the conservatives of white Christian America didn’t unite behind a true believer like Senator Ted Cruz, or lesser candidates but stronger believers like Mike Huckabee or Rick Santorum, during this election season, in order to restore their moral kingdom. Instead, shockingly to many, white evangelicals gave a majority of their votes to a thrice-married libertine with little history of religious piety, Donald Trump. The answer, Jones told me in an interview, lies with one of PRRI’s key research findings: Seventy-two percent of white evangelicals say the country has gotten worse since the 1950s. In a February piece in The Atlantic, Jones explained how the “Values Voters” of the last few decades have become “Nostalgia Voters” in the age of Obama, and Trump is the man they trust to restore the country’s golden age. More than six in 10 white evangelicals believe discrimination against white people has become as big a problem as discrimination against black people, PRRI has found; two-thirds think immigrants take jobs and drain tax dollars.

“They saw Cruz as fighting old-school culture wars, and they trust Trump to turn back the whole tide,” Jones told me. Trump deftly combined three overlapping but separate GOP constituencies: the adherents to the old Southern strategy (with its Northern admirers), the Christian right, and the Tea Party. As the campaign began last year, many observers, including myself, thought those groups might fight among themselves; Trump found a way to unite them—around nostalgia for a better day, as well as around race.

As with smart explanations of why so many white, working-class voters like Trump, Jones’s findings are enlightening, and yet not hugely helpful in thinking about how to lure these voters into the future. We may feel personal sympathy with aging individuals who are watching the world they once knew disappear—most white people have someone like that in their family—yet as a group, they’re hard to imagine how to reach. And as someone who is excluded from belonging in white Christian America by virtue of being Catholic, I’m keenly aware how much the entire project’s driving force has been exclusion—not merely setting a moral, “Christian” example, and hoping others will follow it, and join in.

Jones’s book convinced me that white Christian America didn’t just die a natural death, thanks to demographic change; it is committing suicide, by clinging to that seductive yet toxic modifier “white.” It would seem that Donald Trump is helping it along, as it trades adherence to its supposed moral values for nostalgia about an age that many Christians now believe was immoral in its cruelty and inequality. Still, as they fade into the past, these embattled Americans can still endanger our emerging multi-religious, multiracial communities. If Trump loses, as most polls indicate he will, it’s hard to imagine them admitting they’re wrong and trying to join the rest of the country. But if God works in mysterious ways, maybe that’s still possible.

Corrected on July 12, 2016: This article originally stated that Catholics were not included in the demographic data about white Christian America. They are.