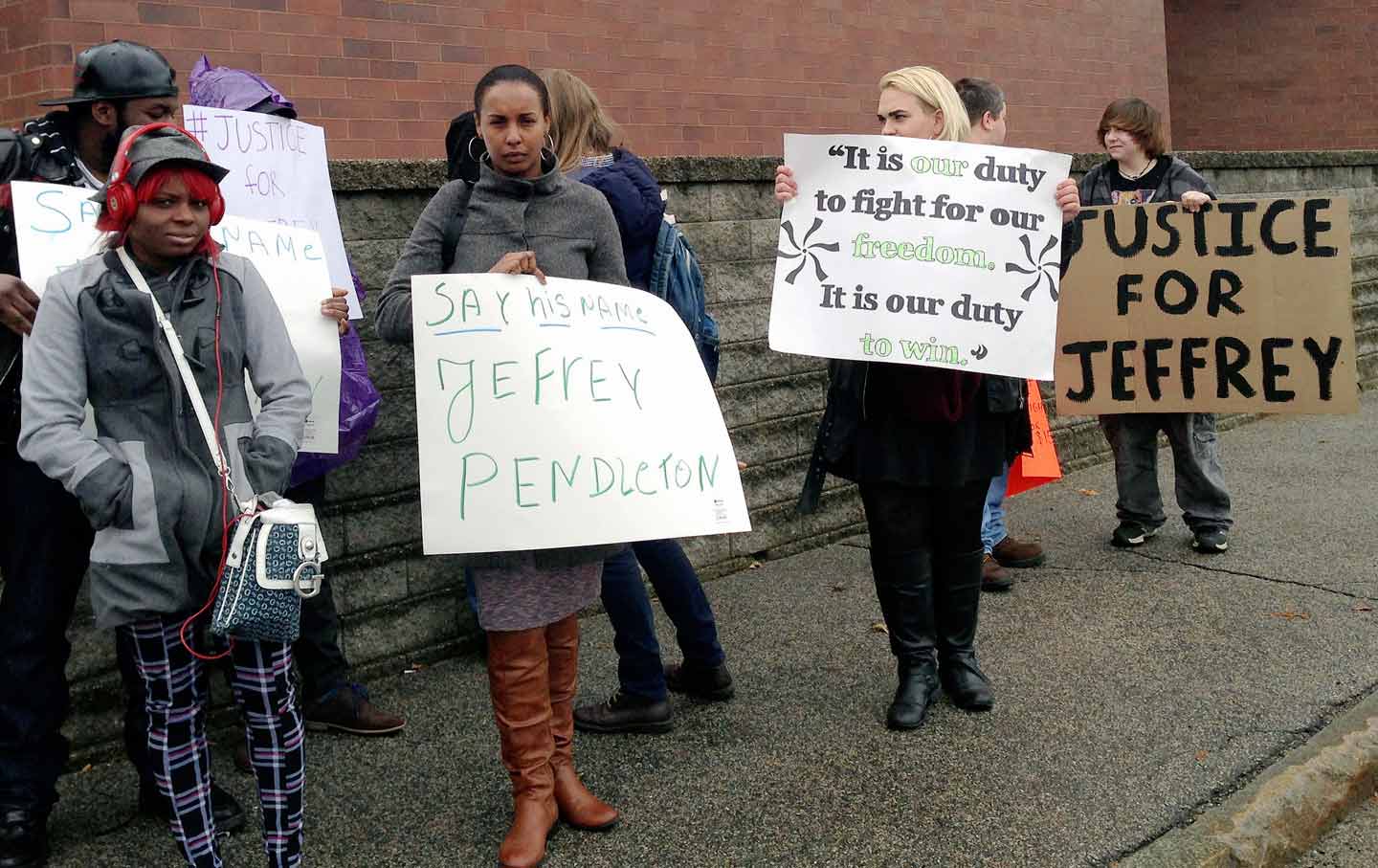 Activists and coworkers of Jeffery Pendleton protest outside the Hillsborough County House of Corrections on March 25, 2016, in Manchester, New Hampshire, where Pendleton died after he was unable to post $100 bail. (AP Photo / Kathleen Ronayne)

No one knows how Jeffery Pendleton ended up dead in a jail cell on March 13, following his arrest over a minor drug charge in Nashua County, New Hampshire. The authorities reported later that his body showed “no signs of physical trauma,” and his death is still under investigation.

But Pendleton knew many struggles. A year earlier, he had successfully waged constitutional challenges against the Cities of Nashua and Hudson against systemic police abuses against homeless people, including unfairly detaining him on $100 bail for “trespassing.”

Earlier this month, the 26-year-old black activist landed again at the Valley Street jail. He was again unable to buy his way out: The $100 bail was too much. The young man who had defended the First Amendment in a civil court a year earlier now seemed to have been stripped of the Eighth Amendment prohibition against “excessive bail.”

His coworkers at Burger King have protested to demand answers about why a routine arrest became fatal—perhaps because they understand how the law tends to punish low-wage workers.

News of Pendleton’s death “hit me pretty hard,” recalls Rob Mercier. “I couldn’t believe it at first, because, I mean, he was a good dude. He didn’t deserve whatever happened to him.” Mercier and other local fast-food workers went on strike with Pendleton in February with the Fight for 15 movement. They remember his stalwart activism but never knew of his homelessness. “He always came to work with a smile on his face, nobody really knew exactly what was happening behind the scene,” Mercier recalls, noting that Pendleton was arrested shortly before he was scheduled to get his paycheck.

“It was over the line. He got in trouble for something small,” says former coworker and fellow protester Andy Fontaine. Fontaine, who says he knows others who were arrested on similar pot charges and got a much lower bail than Pendleton did, says crew members like Pendleton earned about $8.50 per hour, which could make a $100 bail rate prohibitively costly. “That’s like half your paycheck right there. And then the other half is what, half a week of eating?… I wasn’t surprised that he unfortunately didn’t have the hundred for bail. It all probably went to food to stay alive.”

Unlike neighboring northeast states, New Hampshire has resisted setting a higher state minimum wage than the national minimum; workers resort to the ultra-low federal base wage of $7.25 an hour. Meanwhile, a living wage for a single adult in the Nashua area is about $11.50 an hour.

Pendleton’s hardship was shared by the 45 percent of New Hampshire’s workforce now earning sub-$15 wages. And this cyclical poverty drove him to partner with the ACLU to defend homeless people’s rights last year. He sued Hudson citing a long-running pattern of police “instruct[ing] panhandlers that panhandling was illegal or that a permit was required to panhandle.”

The ACLU and Pendleton argued that panhandling was not, in fact, outlawed, and that the aggressive policing violated poor and homeless people’s First Amendment rights. Pendleton’s asking for money with a sign reading “Homeless and struggling” was free expression, just like any public charity fundraiser.

In a separate case filed against Nashua, Pendleton settled with the local government over charges that it had violated his rights by jailing him for 33 days just “for walking along a public foot path in the park adjacent to the Nashua public library.”

The settlements resulted in about $18,000 in payments to Pendleton—and more importantly, commitments to reforming police practices.

Underlying Pendleton’s tragic demise was the austerity policies and low-wage economy that keep millions gainfully employed, but hopelessly broke. Impossibly high housing costs, social marginalization of the homeless, and shunting the poor into jail all reflect a system of state-enforced inequality.

While his past “offense” was essentially being homeless in public, Pendleton was indoors on his last night as a free man. The police stated that Pendleton was arrested at “a private residence” this time for a misdemeanor marijuana charge.

Just a few days earlier, CityLab points out, the state legislature rejected a proposal to abolish that misdemeanor by legalizing pot with a $15-per-ounce tax. So his last bout in the Valley Street jail bookended Pendleton’s long struggle for a $15 wage he would never see, on the other side of a failed bid to put a $15 premium on his alleged contraband.

We may never know what exactly happened in Pendleton’s final hours, but we know the jail was notorious for inhumane conditions. And the staff knew him from his previous sentence. Superintendent David Dionne told the Union Leader Pendleton was well-liked and had earned the “privilege” of performing inmate chores.

But in the end, there were supposedly no indications of “distress.” Pendleton never seemed to show outright the struggles he was quietly fighting; not even to his family. On a campaign website to raise funds to bring his body home to Arkansas, Pendleton’s family stated:

Jeffery, unfortunately, never let his family know about his money problems…. He simply let us know he was fine and living in New Hampshire. He worked at Burger King. But the truth was that he was homeless and had to struggle.

The family also challenged the local authorities’ investigation, noting that a separately commissioned examination of Pendleton’s body indicated he “was harmed” and it was “likely that harm caused his death.”

Whatever the cause, his death—one of thousands of deaths in jail over the past decade—came a day before the Justice Department issued a memorandum to local authorities criticizing the practice of setting excessive bail that disproportionately punished indigent defendants.

The real harm Pendleton suffered was the epidemic of intersecting poverty, racism, and state-sanctioned violence. The system that inspired him to join street protests ultimately also cornered him in the cell where he died.

For Fontaine, who vows to continue with the Fight for 15 after his colleague’s death, questions about why he died still linger. He speculates Pendleton’s fate could be tied to “the case he had won, it could have been…discriminating against him because he was a darker color, it could have been [that] he was on strike. But whatever the reason, it’s no excuse…. They should have looked at him as a person and not some nobody…that can disappear and no one will care about.”