Ever since Donald Trump was elected president, mainstream media outlets have been obsessed with the opinions of people who voted for him. Rarely does a week goes by without a journalistic effort to further “understand” these Trump voters, often with absurd results—like when The New York Times replaced its opinion page with nothing but letters from Trump supporters.

A much more worthwhile enterprise would be to examine non-voters—the people who don’t show up to vote, but exist in such large numbers they could upend American politics instantly if they decided to get involved. There are persistent non-voters, who just never participate, and also a fascinating bloc of people who voted for Obama but stayed at home in 2016. These individuals, disproportionately young, low-income people of color, have important implications for the future. So what do they want, and what would it take for them to get involved?

To begin getting at that answer, I first examined the Cooperative Congressional Election Studies 2016 Survey to get a better sense of the people who voted for Obama in 2012 but didn’t vote at all in the last election. I used self-reports, which admittedly are subject to some recall problems because individuals may misreport voting, and because people are also often likely to overstate support for the winning candidate. So my analysis should not be seen as definitive, but rather suggestive. It found that 38 percent of individuals who voted for Obama in 2012 but then didn’t vote in 2016 were black, and 15 percent were black voters under 30. By comparison, 20 percent of Clinton’s voters were black and 3 percent were black and under 30.

Using validated turnout data (which is available in the 2016 survey for 2016, but not 2012), I again found that people of color made up 20 percent of voters in 2016 (somewhat lower than what has been suggested by Census data), but minorities were 34 percent of non-voters.

It will obviously be critical for Democrats to mobilize these voters to their side, but what do these non-voting Americans want? Examining specifically black non-voters, I found strong support for progressive policies, with 88 percent of black non-voters saying they would have voted for Clinton, 93 percent in favor of a higher minimum wage, and 74 percent for ending mandatory minimum sentences. 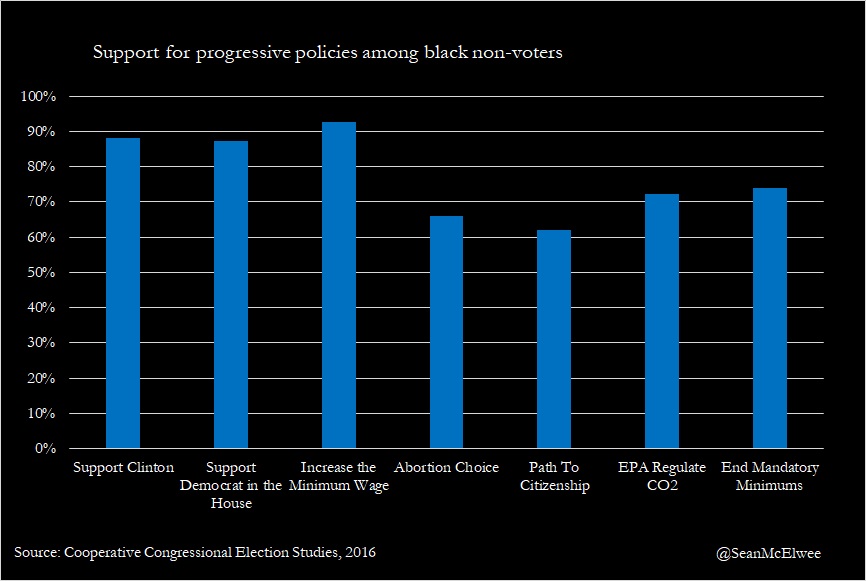 Next, I looked at two questions from the 2016 American National Elections Studies survey. The first asked respondents if they would support a government guarantee of jobs and income. Respondents placed themselves on a seven-point scale from “Government should see to jobs and a standard of living” to “Government should let each person get ahead on their own.” I rescaled the variable so that the scale run from 0 (most conservative) to 1 (most liberal) and did the same with a variable that asked about government health care versus private health care. As the chart shows, black Americans are more supportive of socialist policies: 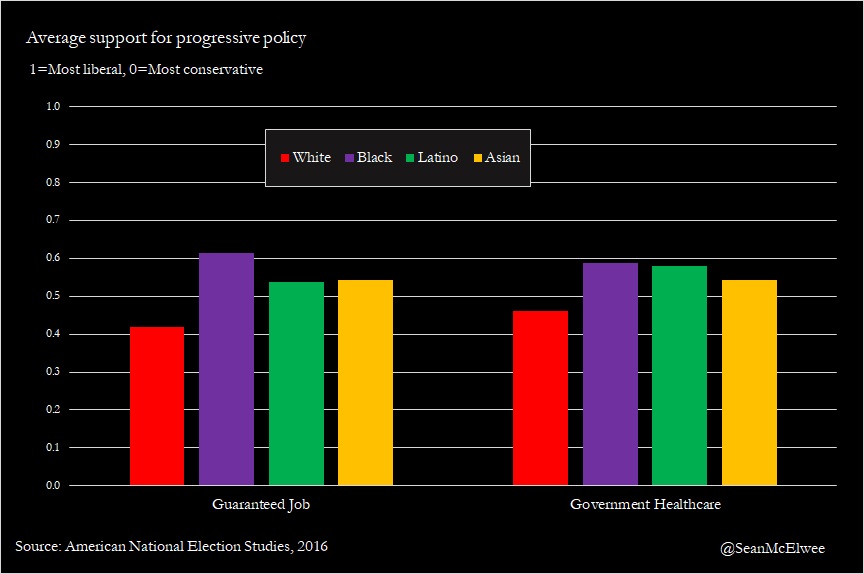 Unlike Republicans, who constantly feed their evangelical base, Democrats spend far too little time engaged in thinking about how to energize black voters. That may be changing, however—as part of a project exploring the attitudes of black voters, Priorities USA, a major Democratic political action committee, endeavored to actually examine the beliefs of unregistered black millennials.

Priorities USA found that these potential voters are deeply detached from politics because they don’t think progress is possible. Three-quarters of unregistered young African Americans agreed with the sentiment that “no matter who wins an election, very little in my life or in my community ever seems to change.”

However, the polling also suggested young black millennials can be mobilized by the sense that their community is under attack. Seventy-two percent agreed that “now more than ever, it’s important for young African-American people to get out and vote, since many people out there—including those in power—are trying to take our rights away.”

Priorities found that an economically populist message could be effective for mobilizing these young black voters:

Naturally an economically populist approach should not come at the expense of ignoring racism, as 90 percent of these unregistered young people report that racism is a big problem in the country, and 61 percent say that racism affects them “a great deal” or “a fair amount” in their personal lives.

While Democrats would appear to be the most natural fit for these voters, the data make clear there is a lot of work to be done. These voters are somewhat skeptical of the Democratic Party, with 53 percent saying Democrats do a better job of representing people like them, but 42 percent saying neither party does. Forty-four percent expressed a favorable view of the Democratic Party and 11 percent expressed a negative view, but the rest (45 percent) were neutral or didn’t have an opinion.

Of course, no amount of messaging can make up for the fact that many young black men are permanently barred from voting by the racist criminal-justice system. Others are disenfranchised by arbitrary and confusing registration deadlines. In addition, research by social scientists Vesla Weaver and Amy Lerman suggests that interactions with police or arrests, even if they don’t lead to a conviction or jail time, depress turnout and reduce trust in government. A study in Alabama found that two-thirds of people who would benefit from Medicaid expansion were not registered to vote, and that many are barred from voting because of former incarceration.

The lack of coverage of black non-voters and drop-off voters is deeply disturbing—millions of Americans are being systematically erased from media narratives. For those who see a more progressive path forward for the Democratic Party, mobilizing young black non-voters, unregistered folks, and drop-off voters should be a top priority. This will involve a policy shift toward more aggressively talking about progressive economic policy, but also issues like criminal justice and police brutality.

In addition, progressives need to fight against racist barriers to voting like voter-ID laws, felon disenfranchisement, and onerous registration barriers. Democrats have seen in multiple special elections the power of black voters. Yet they are still doing far too little to empower the electorate of the future.