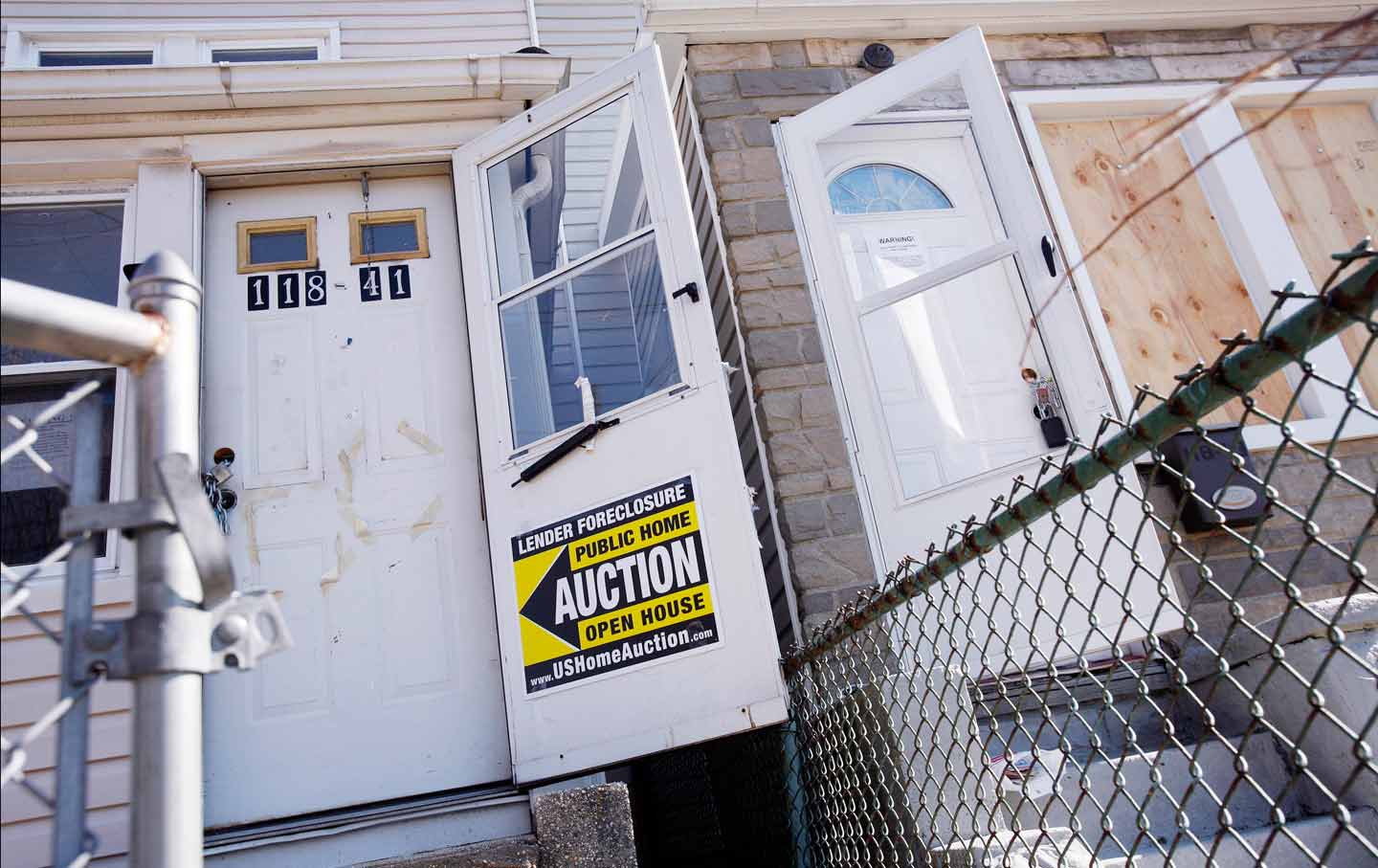 A foreclosed home up for auction is seen in the Queens borough of New York. (Reuters / Shannon Stapleton)

The Great Recession has technically started to recede, but the banks that sparked it have mostly been allowed to walk. Some even prospered in the aftermath. But a jury just hit back against one predatory lender, restoring a little of the confidence in the system that Wall Street stripped away from Brooklyn during the financial crisis.

The refinancing loan product they marketed, STAR NINA (No Income, No Assets), was tailored toward homeowners who were cash poor but had considerable equity in their properties. Under the “no income, no assets” feature—basically Wall Street’s version of “see no evil”—the plaintiffs, all black, Latino, or immigrant homeowners—got loans that looked reasonable initially, but were embedded with a stealth interest rate ballooning up to 18 percent.

“Emigrant did not want to know the income of the borrower,” says Brooklyn Legal Services attorney Rachel Geballe, “but they could certainly tell.” Financial records the company had tracked displayed subpar credit and past-late payments at lower rates, revealing “that the borrower doesn’t have enough income to cover a much higher payment. In this case, none of the loans was actually affordable.”

The no-verification scheme used in this case was effectively banned by regulatory safeguards recently enacted in the Dodd-Frank reforms. But similar aggressive profiteering could be used to fleece homeowners again given the weakness of current regulations.

According to the suit, Emigrant required no actual proof of the borrower’s financial risk status—just a simple signature certifying ability to handle the debt on a “resource letter.” The bank reportedly “did not discuss the letter with borrowers or explain it to them, and it was typically left unread…. Emigrant knew that the Resource Letter was worthless.”

Emigrant also knew early on that communities of color would be easy prey. Here “was where it had its greatest success in making its most profitable ‘No Income’ loans.” Emigrant’s “success,” the suit claims, was the fact that “the average STAR borrower had 50 percent equity in their home. That large equity cushion protected Emigrant no matter what happened with the loan.” The practice continued even once the cascade of defaults began rolling in, hitting one in three borrowers, through the end of 2008 when regulators barred the predatory 18 percent interest scheme.

Felipe Howell, a middle-aged black Panamanian-American longtime homeowner in Jamaica, Queens, got tethered to a toxic Emigrant loan after being persuaded to build a new rental property on his residence with a contractor tied to Emigrant. Pressured by heavy marketing, the suit states, “Howell was concerned about the timing of the construction and whether he would be able to make mortgage payments, but the broker and contractor repeatedly insisted that it would all work out, that he would have a couple months before he would have to start paying the Emigrant loan.” He went under with $1,800-plus payments while earning no net income.

Plaintiffs Edith and Jean Robert Saint-Jean, a Haitian-American couple living with two adult daughters in a three-family Canarsie house, became entangled in an “abusive and patently unaffordable” refinancing scheme, with no chance to fully review the contract before closing. Though the couple, a homecare worker and library clerk, had owned their home in the multi-family property, their refinance loan became “certain to fail,” with unsustainable $4,000 payments. After several missed payments, they fell about $80,000 in the hole. By the time they got their foreclosure notice in 2009, they had suffered the “loss of nearly all of the equity in their long-time family home.”

As the market collapsed, the bank twisted the knife by letting families slide into default and letting their usurious debts swell as foreclosure approached.

The plaintiffs were awarded a total of $950,000, with individual awards ranging from about $70,000 to $225,000. The verdict provides just partial restitution for the home asset losses. But the jury’s definitive finding shows the consequences of depriving black and brown communities of fair access to credit.

As a civil-rights issue, predatory asset-stripping might be more disastrous than duping people into worthless speculative real estate, because it robs communities of the equity they already possessed.

According to a racial analysis of overall household equity by the Social Science Research Council and ACLU, the Emigrant experience portends the widening of the racial wealth gap triggered by the housing crisis: “during the crucial recovery period of 2009 to 2011…[median] white wealth levels, excluding home equity…exhibited zero loss. During that same time period, however, black households continued to experience severe declines, with the typical black household losing 40 percent of non-home-equity wealth.”

While the lawsuit provides limited recompense for just a few victimized families, at least the verdict helps elucidate the tactics lenders have employed and continue to employ, despite Dodd-Frank’s moderate, but still inadequately enforced reforms.

Currently, says Geballe, there’s actually a danger of the financial system swinging too far the other way: overcorrecting for the pre-2007 free-for-all, the regulatory climate has shifted now, so that “reverse redlining reverts back to redlining, where communities that were being flooded with poisonous credit. Then it’s hard to get a loan at all. Neither of those options is what we’re looking for. What we’re looking for is safe and affordable lending in all the communities of New York City.”

Hopefully, advocates will find a way to build housing justice for local communities before Wall Street—already prowling the foreclosure-strafed streets of Brooklyn—preys again on the spoils of the last crisis.