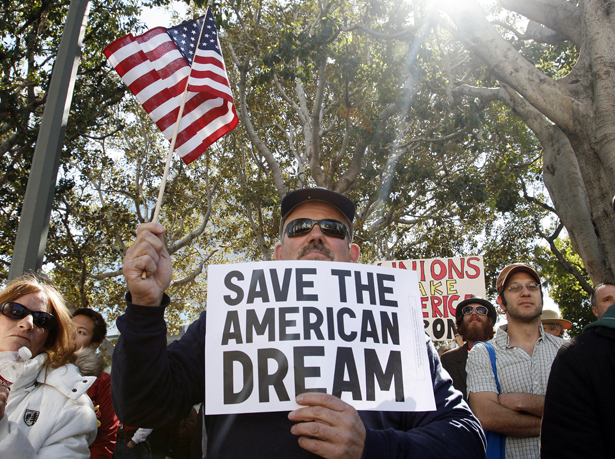 For years, the American labor movement has been on the defensive as it has become harder and harder for workers to join or maintain a union. But some House Democrats are planning a dramatic counter-offensive: a bill that would make union organizing a civil right.

Representatives Keith Ellison and John Lewis plan to introduce a bill Wednesday that would make labor organizing a basic freedom no different than freedom from racial discrimination. That sounds like a nice talking point—but this isn’t just another messaging bill.

The Ellison-Lewis legislation would amend the National Labor Relations Act to include protections found under Title VII of the Civil Rights Act to include labor organizing as a fundamental right. That would give workers a broader range of legal options if they feel discriminated against for trying to form a union.

Currently, their only redress is through a grievance with the National Labor Relations Board—an important process, but one that workers and labor analysts frequently criticize as both too slow and often too lenient on offending employers.

If the NLRA were amended, however, after 180 days a worker could take his or her labor complaint from the NLRB to a federal court. This is how the law works now for civil rights complaints, which gives workers the option, after 180 days, to step outside the Equal Employment Opportunity Commission process.

Then, workers would have sole discretion on whether to push a complaint, as opposed to relying on a decision by the NLRB on whether to forge ahead. Workers could also move the process along much faster than the NLRB handles complaints, which can often take years.

Ellison told The Nation that the legislation would also help workers recover more money—the NLRB will award back pay to a grieved worker minus whatever they earned while awaiting a decision, which can often amount to basically nothing. “[The NLRB] remedy, though useful and very important, and nothing in our legislation changes that, that remedy is considered slow and somewhat inadequate. For some of these union-busting law firms, [they] will say ‘so do it and we’ll just pay.’”

Ellison said he believes the labor movement needs to get back on the offensive. “With the Supreme Court in here, and what they just did in Harris v. Quinn and all the things they wrote about Abood, it’s insane to hope for the best,” he said, referring to the recent decision involving non-union public workers and their fee arrangements with unions. “I mean this Supreme Court is openly hostile to racial justice and worker justice simultaneously. So we better be moving out on both fronts.”

Ellison told MSNBC, which first reported the bill, that he got the idea from a book by Century Foundation fellows Richard Kahlenberg and Moshe Marvit, titled Why Union Organizing Should Be a Civil Right. They argue that the First Amendment’s right to free association should clearly include one of the most crucial forms of association—banding together to push back against unfair treatment from employers.

Marvit told The Nation he thinks treating labor organizing as a civil right is not only constitutionally appropriate but also much more appealing to the general public. “Civil rights is something that Americans really understand, and has a legitimacy that is sort of beyond reproach,” he said. “So when you put it in civil rights terms, it’s something that really speaks to people.” (In the interest of full disclosure, Marvit has written for The Nation in the past.)

“Frankly, I think Republicans have been saying it on the other side. That’s been the message of the National Right to Work Committee for sixty years, that workers have a civil right not to join a union,” Marvit continued. “And I think that’s been a successful argument for them. It taps into this notion of your freedom to choose.”

Major unions will also be on board. Both the AFL-CIO and the Change to Win coalition will back the bill, along with The United Food and Commercial Workers and the American Federation of State, County and Municipal Employees.

Joseph Geevarghese, deputy director of Change to Win, told The Nation that his union was joining the push “because union organizing has been maligned. Unions have been maligned in our society. There is a value in re-defining what all of these tens of thousands of brave workers are doing as, “We have a fundamental right to stand up and speak out about injustice in this country.’”