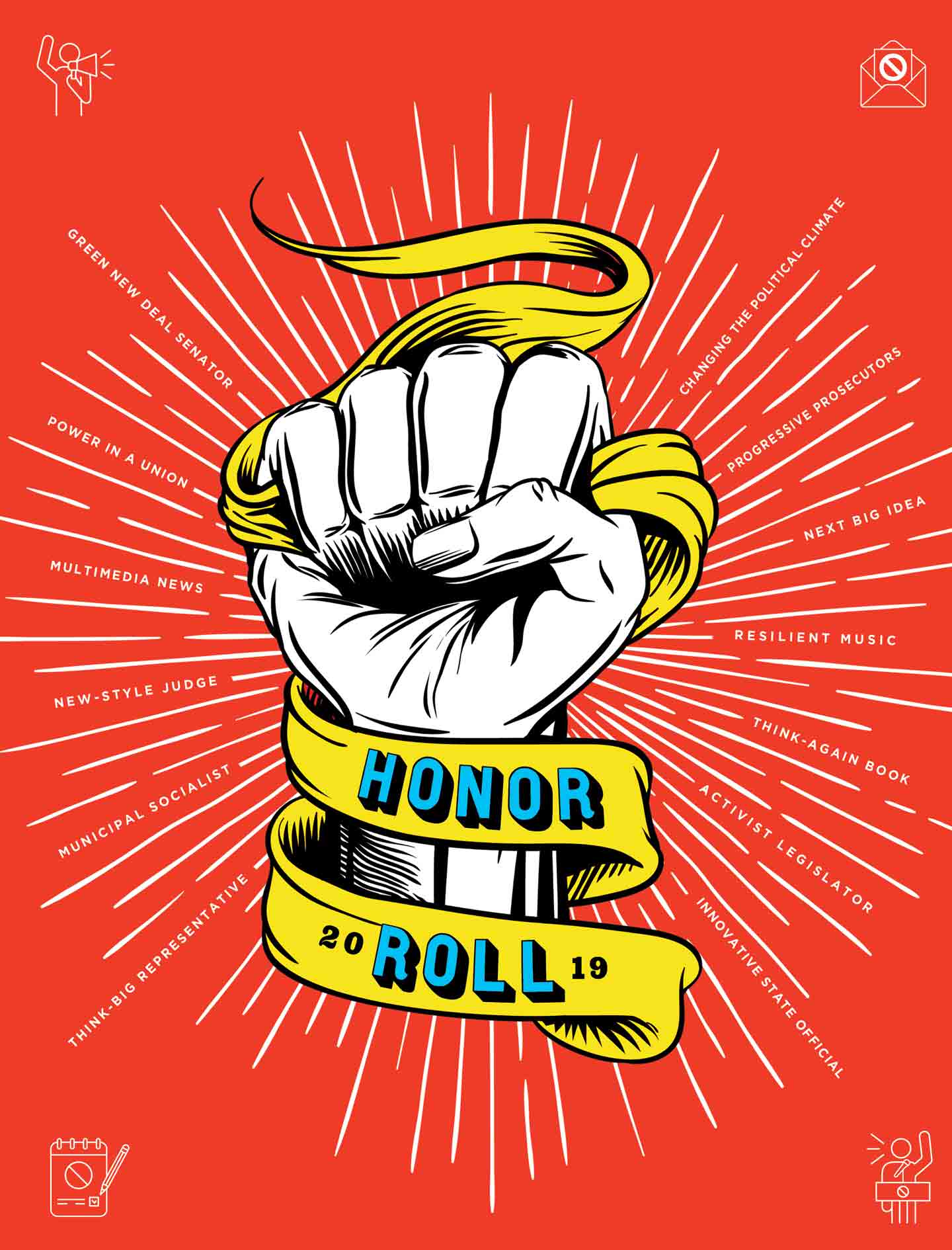 Impeachment is a big deal. So is the 2020 presidential election. Plenty of advocates for executive accountability and even a few White House contenders are deserving of honor. But The Nation’s annual honor roll has always had a bias toward those who do the steady work of advancing economic, social, and racial justice but do not always enjoy the spotlight. Here are a few of 2019’s most valuable progressive officials, activists, organizations, and ideas that are shaping the future. 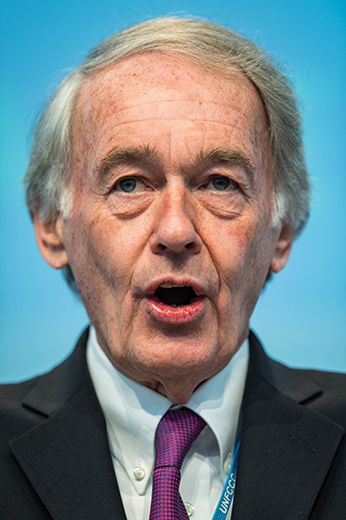 If this veteran Massachusetts legislator were running for president, he’d echo past honor roll stars Bernie Sanders and Elizabeth Warren. Instead, Markey has gone big in the Senate, aligning with younger representatives to advance bold structural change. With Representative Ted Lieu, Markey has introduced legislation to prevent the president from launching a nuclear first strike without congressional approval. After the Federal Communications Commission repealed net neutrality protections, Markey joined Representative Mike Doyle in introducing the Save the Internet Act. In February, he joined Representative Alexandria Ocasio-Cortez to sponsor the Green New Deal resolution to address climate change and the next economy. “He’s not just resting on his record of the past, but he’s aggressively pursuing an agenda for the future,” Ocasio-Cortez says of Markey. “And that’s what a progressive is, and that’s what progressivism [is] all about.” 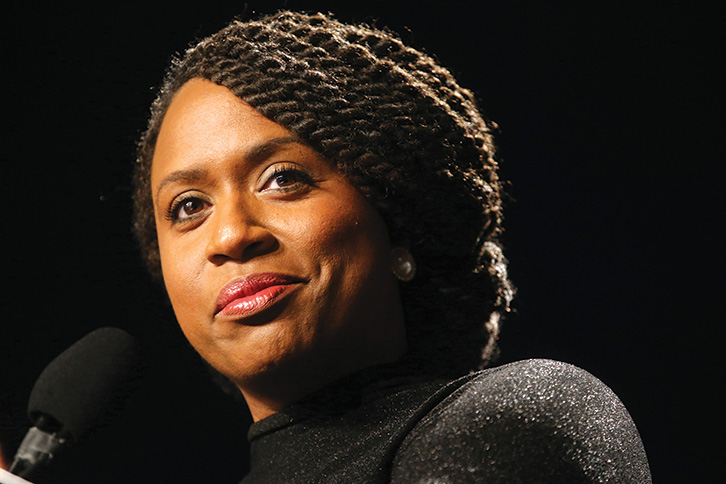 Elected in 2018, Pressley hit the ground running with innovative and courageous demands for think-big changes. The Massachusetts Democrat has worked closely with Ocasio-Cortez and Representative Barbara Lee to overturn the 43-year-old Hyde Amendment, which bars using federal funds for abortions. “Hyde’s days are numbered,” Pressley says. “Tick-tock, y’all.” She responded to Attorney General Bill Barr’s plan to resume federal capital punishment by introducing a sweeping abolition measure. Last March she proposed an amendment to lower the federal election voting age to 16. The amendment received 126 votes to add it to the For the People Act—not enough to pass, but Pressley isn’t backing off. “From gun violence to climate change, our young people are organizing, mobilizing, and calling us to action,” she says. “They are at the forefront of social and legislative movements and have earned inclusion in our democracy.”

Wisconsin Governor Scott Walker thought he would have an easy time passing a 2018 referendum to eliminate the elected position of state treasurer. Then Godlewski, a 38-year-old political newcomer who had spent much of her adult life working on micro finance and social investment issues, organized a grassroots campaign that argued every state needs an independent financial watchdog. Voters agreed. They rejected Walker’s scheme 61 to 39 percent in the spring of 2018, and that fall—on the same day Walker was voted out as governor—they voted Godlewski in as treasurer. Since then, she has developed plans to tackle the retirement crisis, championed women’s economic empowerment, and used her position as the new chair of the state’s powerful Board of Commissioners of Public Lands to launch environmental protection initiatives. Her approach offers a model for seeking, winning, and revitalizing neglected local and statewide posts. 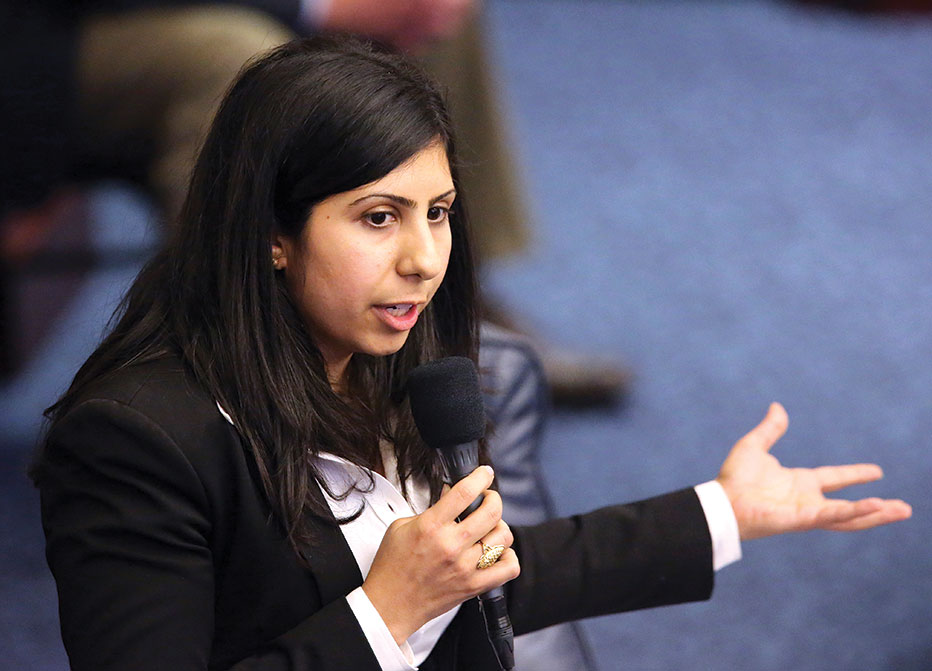 A University of Central Florida campus organizer who went to work for Planned Parenthood at 22, Eskamani took her activism to the next level in 2018. She flipped a Republican-held state House seat representing the Orlando district that was home to Pulse, the LGBTQ dance club that in 2016 experienced the second-worst mass shooting by a single gunman in modern US history. Eskamani wanted to shake up the legislature, and she started immediately by refusing to attend a freshman reception hosted by powerful corporate lobbying groups. In her first year, she sponsored more than 20 bills on reproductive rights and LGBTQ community services, poverty, immigration, and criminal justice. Most were rejected by the Republican-controlled legislature. But she has won more than her share of fights with an inside-outside model for activism that has earned her national recognition for challenging the NRA and lobbyists, forcing Florida’s conservative governor to show respect for the LGBTQ community, and joining immigrant rights struggles as the proud daughter of Iranian expatriates. 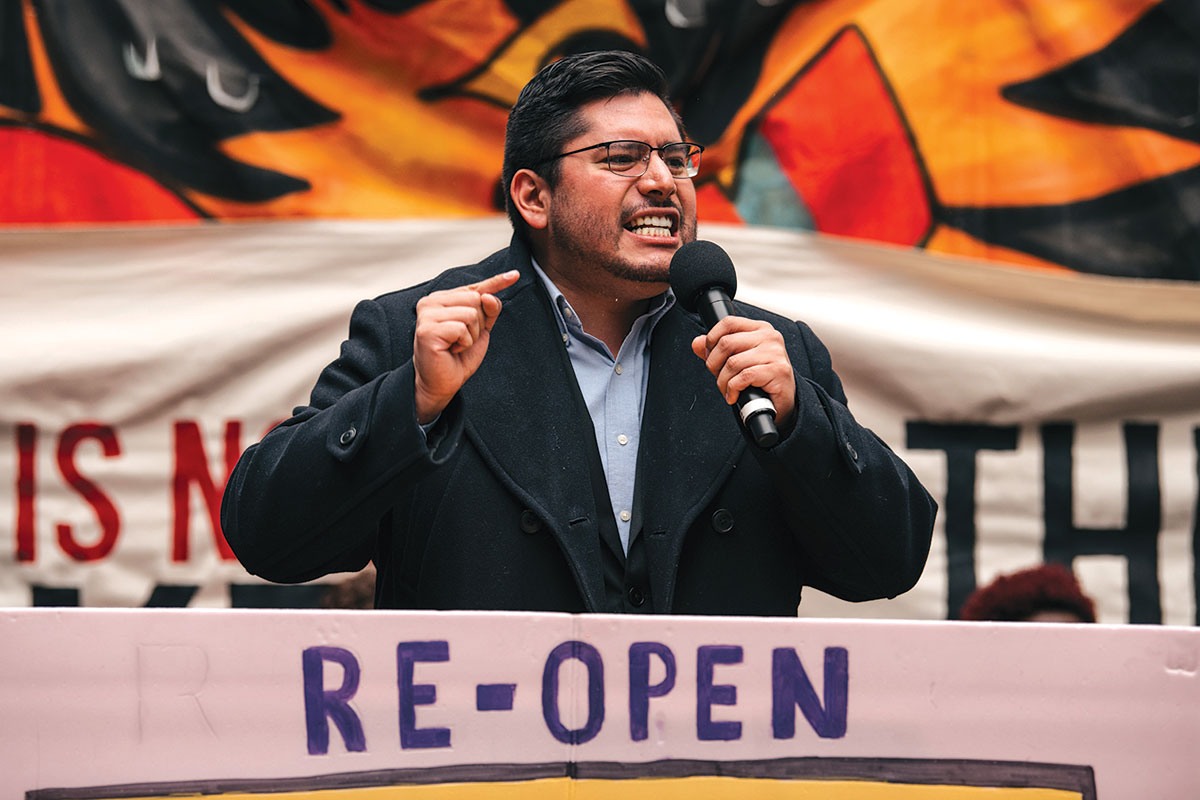 The August Chicago magazine headline said it all: “How Socialism Permeated City Council.” One of 2019’s biggest local politics stories was the renewal of municipal socialism in cities across the country, as a new generation of city councilors and school board members, many associated with and backed by the Democratic Socialists of America, swept into office. Nowhere did that wave hit harder than Chicago, where six democratic socialists won council seats this year, creating a socialist caucus that, in combination with progressive allies, has real influence on issues like affordable housing and a proposal to study a city takeover of the local power grid. Most of the DSA members are newcomers, but Ramirez-Rosa, a 30-year-old Chicago native, is in his second term. Reelected with ease this year, he has shown the way with bold initiatives such as participatory budgeting, a democratic process he uses to let community members directly decide how to spend roughly $1 million on ward infrastructure improvements. 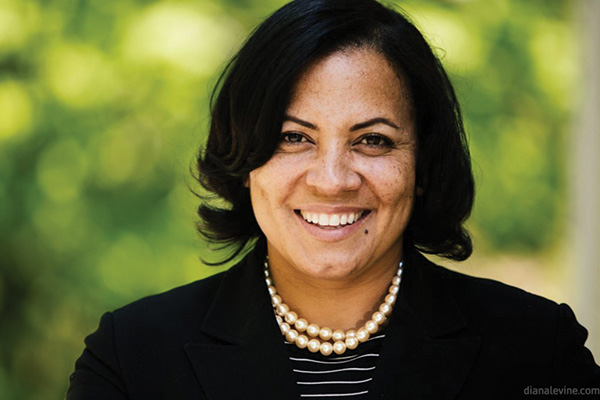 Prosecutors are proving that local elections matter and making real their promises of reform. According to Rollins, the district attorney of Suffolk County, Massachusetts, “Change never happens when people are comfortable.” Her disruptive agenda includes decriminalizing low-level offenses: “We can hold people accountable without sending them to jail.” State’s Attorney Foxx of Cook County, Illinois, has personally filed the first motions to vacate roughly 1,000 low-level cannabis convictions. Philadelphia District Attorney Krasner pulls the threads together when he argues, “The old policies don’t just break individuals, many of whom did not need to be broken. They break communities, and they break cities for a whole host of economic and social reasons.” These new DAs have started working together to encourage the election of more of what the Los Angeles Times referred to as “new-style prosecutors…seeking to end mass incarceration, eliminate cash bail, divert more defendants into drug treatment programs, eradicate the death penalty and reverse wrongful convictions.” It’s working. In November, reformer Chesa Boudin won a high-profile race for San Francisco DA, with backing from Krasner, Foxx, and Rollins.

Changing the criminal justice system requires more than a different kind of DA. It also requires new judges like Franklin Bynum. Elected in 2018 to the Harris County Criminal Court bench in Houston, Bynum, a 37-year-old democratic socialist, moved immediately to unravel and replace what he calls the “oppressive punishment bureaucracies” that stand in the way of justice. Arguing that “people need care, not cages,” he has focused on ending the cash bail system. He has brought to the bench the perspective of an experienced criminal defense lawyer who knows the system can be more rational and humane. He recalls when a prosecutor objected to his telling the story of a death-row exoneree during jury selection in a case he was trying as a capital defense lawyer. The judge sustained the objection. Bynum says, “I get to tell the story now, because I’m the judge.’”

The genius of the Sunrise Movement’s climate justice activists is that they challenge not just individual politicians but the political process itself. In 2019 the group organized marches, rallies, and strikes on behalf of a climate justice agenda of decarbonization, jobs, and justice. It demanded that Democratic politicians sign on for a Green New Deal. And it pressured the Democratic National Committee to hold a single-issue presidential debate on the climate crisis. CNN and MSNBC agreed to organize town halls and forums. The Sunrise Movement is keeping pressure on the DNC with protests, banner drops, and lobbying that refuses to take “no” for an answer.

POWER IN A UNION

Teacher strikes are a big deal now, as educators and allied public school employees struggle for resources and respect in an age of austerity budgets and privatization schemes. For years, the Chicago Teachers Union has provided a model for militant trade unionism by making big demands, organizing with parents and students, and building winning coalitions. The CTU struck in the fall of 2019 and won big, securing mandatory class size caps, sanctuary school protections for immigrant and refugee students, and staffing commitments that include a guarantee that there will be a nurse and a social worker in every school, every day. “Our contract fight was about the larger movement to shift values and priorities in Chicago,” says CTU vice president Stacy Davis Gates. “In a city with immense wealth, corporations have the ability to pay to support the common good.”

Imagine if there were a program to help make the costs of raising or caring for a family manageable. Imagine “if new parents could draw on a public family care insurance fund to take paid leave to bond with their new babies and then use it to pay for trusted daycare so that they can return to work. [Imagine] if relatives of an aging loved one could tap into that same fund to hire a home care worker so they don’t have to quit their jobs and move cross-country to provide care.” So asks Caring Across Generations, which launched the movement for the social insurance program last June. Ai-jen Poo, one of today’s most innovative organizers, is the codirector of the group, which seeks to build coalitions in support of a public insurance fund to make family care affordable and accessible to all. As with Medicare for All, the fight for universal family care seeks to transform the lives of both the people who need care and those who provide it.

Rising Up With Sonali

Hosted by author and activist Sonali Kolhatkar, this all-women-run radio and television program promises “progressive news coverage rooted in gender and racial justice to a wide audience.” It delivers, with a radio program airing on Pacifica stations such as KPFA and KPFK and a show on Free Speech TV. Kolhatkar’s conversations with guests go deep. Even when she’s covering topics everyone else is covering—like impeachment—she infuses the discussion with economic, social, and racial justice perspectives that reframe and expand the debate. The show’s international reports highlight working-class struggles and the experiences of women and indigenous people. 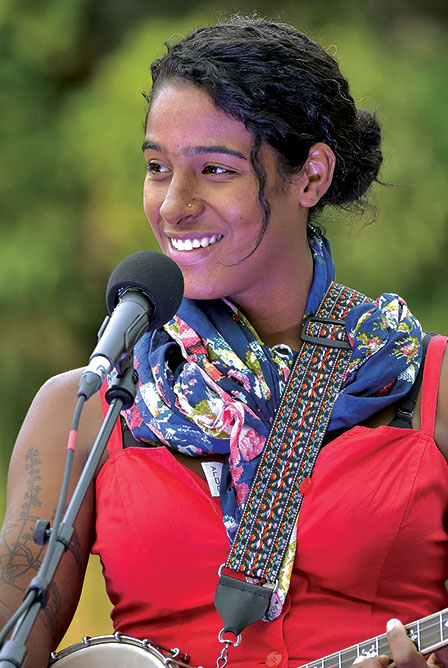 There are many ways to reveal the corruptions of wealth and power. McCalla does it with an elegant blend of Creole, Cajun, jazz, gospel, zydeco, and Haitian rara influences that makes the music as instructive as the words she uses to illuminate the experiences of workers, immigrants, and folks who have fallen on hard times. Sometimes edgy, sometimes moody, always enlightening, this is music that Songlines magazine hailed as “a soulful rumination on the effects of living in an unjust society.” McCalla, a brilliant multi-instrumentalist whose previous work explored the poetry of Langston Hughes, says, “I never imagined that The Capitalist Blues could make me so damn happy, and perhaps that represents the paradox of it all.”

Suketu Mehta’s This Land Is Our Land: An Immigrant’s Manifesto 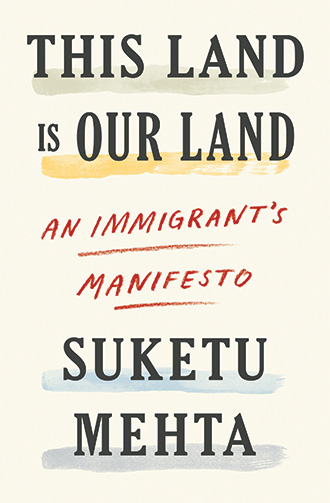 “These days, a great many people in the rich countries complain loudly about migration from the poor ones,” writes Mehta in this argument for new thinking on old issues. “But as the migrants see it, the game was rigged: First, the rich countries colonized us and stole our treasure and prevented us from building our industries. After plundering us for centuries, they left, having drawn up maps in ways that ensured permanent strife between our communities. Then they brought us to their countries as ‘guest workers’—as if they knew what the word ‘guest’ meant in our cultures—but discouraged us from bringing our families.” The system was never fair, and now “again, they ask us not to come, desperate and starving though they have rendered us, because the richest among them need a scapegoat. This is how the game is rigged today.” Mehta’s book, published by Farrar, Straus and Giroux, is a strikingly effective counter not just to Donald Trump but to the xenophobia the United States needs to understand and reject.