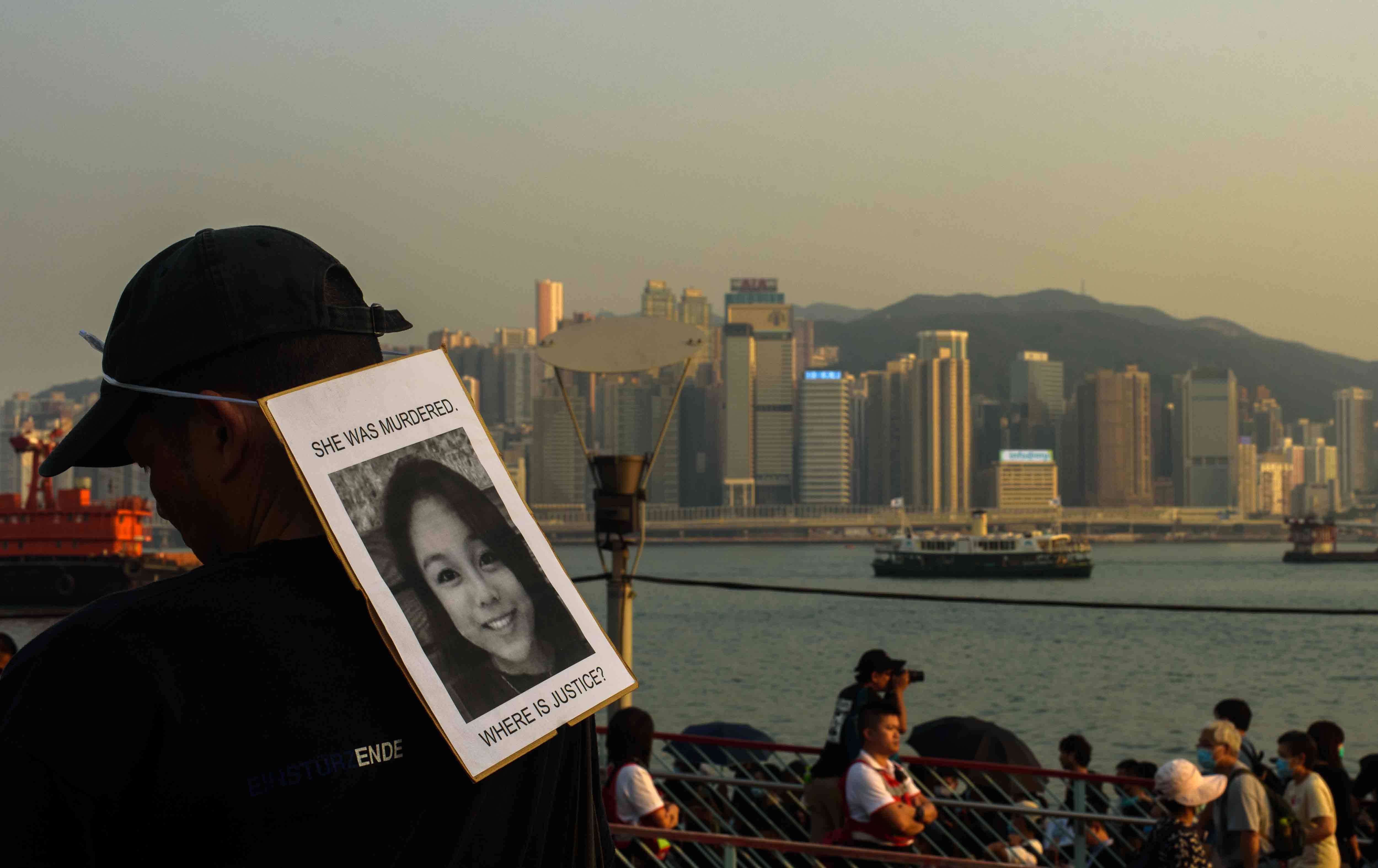 A sign with a photo of Chan Yin-lam hangs from the head of a protester in Hong Kong. (Photo by Benjamin Haas)

Chan Yin-lam’s youthful smile haunts Hong Kong. Over the past year, her death at 15 would have been a private family tragedy, but when her naked body was found in the water in September, anti-government protesters claimed she had been murdered by police who framed it to look like a suicide. It was a shocking claim that rested on little evidence, but the widely believed accusation shows how faith in Hong Kong’s authorities has evaporated since the protests began six months ago. Hong Kong’s police used to be known as “Asia’s Finest”; now protesters accuse those same cops of murdering children.

Hong Kong’s rise as an international hub for trade and finance was built on the belief that the government, courts, and cops are run according to international standards. It’s a crucial asset for a territory with no natural resources and factories that moved across the border years ago. With what was seen as a law-abiding government, Hong Kong sat in stark contrast to the cronyism and corruption that plagues mainland China.

The rapid pace of political decay will have a lasting damage. More than two-thirds of the population believes the police have “engaged in unprofessional behavior such as conducting indiscriminate arrests and going out of control,” according to a survey published last month by the Hong Kong Public Opinion Research Institute. The current unrest has even seen the government co-opt typically apolitical departments, such as when the welfare secretary claimed fumes from barbecue pits were more hazardous than the more than 10,000 rounds of tear gas fired.

The consequences could fundamentally reshape Hong Kong. The police now risk becoming seen as an occupying force as they lose the consent of the community. Many ordinary citizens have already shifted their money overseas and the city’s status as a regional financial hub could crumble. Those who can afford to leave or send their children abroad have already begun making arrangements, with the potential for a massive brain drain in the coming years.

In years past a minor scandal was enough to sink political careers. A candidate for the chief executive, the city’s top official, watched his campaign collapse in 2012 after it was revealed his home had an illegally built basement. These days Carrie Lam, the current chief executive, repeatedly dismisses calls for government and police accountability, and when her justice minister was also found to have illegal home additions last year, the revelations were brushed aside, and nothing was done to placate public anger.

Claudia Mo, a pro-democracy member of the city’s legislature, said she has never seen confidence in the government sink so low.

“As Beijing has asserted more control over Hong Kong and its institutions, distrust has grown,” she said from her office overlooking Victoria Harbour, where she had hung signs calling for top officials to resign. “And in terms of police behavior, that which previously was thought to be impossible is now happening on a daily basis. Suspicions are here to stay, and for a long time, for decades.”

Mo’s constituents have been clamoring for answers, and she said she sympathizes with their concerns. Mo even admitted she had trouble believing the official account of Chan’s death, and suggested the police had planted agent provocateurs to vandalize shops and public infrastructure.

Conspiracy theories in anti-government movements are nothing new. In the years leading up to the Revolutionary War, the patriot Samuel Adams peddled the idea that the British wanted to enslave the entire population of the colonies. The false “Pizzagate” theory—that Democrats ran a child sex ring from a Washington, DC, pizzeria—led one believer to fire an assault rifle inside the restaurant.

But while many associate such claims with fringe politics, the rampant distrust in Hong Kong’s government means claims that may have once been dismissed as outlandish are finding a mainstream audience willing to believe. A blanket refusal by the authorities to hold police or government ministers accountable perpetuates that distrust.

I asked more than two dozen protesters about Chan’s death at a recent protest along Hong Kong’s waterfront, and every single one said they believed the police had killed her. Admittedly, they had all come to an anti-government march, but they ranged from young to old, and included new families with kids as well as retirees. They had a diverse list of jobs, from an accountant to a hotel cleaner to a high school teacher.

“I think the police killed her, but until we have an independent investigation into the police, how can I believe anything else?” said a bank teller who would only give her surname, Wong. “The police shouldn’t be afraid of an inquest if they have nothing to hide.”

In an interview with a local pro-government TV channel, Chan’s mother said she believed the police determination that her daughter had committed suicide and asked others to refrain from offering alternative theories. But that plea has been largely ignored, and last week students broke into Chan’s school in an attempt to retrieve CCTV footage surrounding her death.

Hong Kong Was Never Built to Stand Up to China

The Hong Kongers Building a Case Against the Police

In many instances, there is something missing or questionable about official accounts, but that information gap gets filled with claims for which there is often little evidence. “A lot of these suicides just look awkward, and I’ve been shocked the police close these cases so quickly,” said one suicide prevention expert, who asked not to be named for fear of jeopardizing his government funding.

Besides a rash of suicides where protesters suspect foul play, many believe Chinese military personnel are secretly embedded in the civilian police force, and that undercover officers are often behind the vandalism attributed to protesters. Many of the protesters’ theories are plausible. Police dressed as masked protesters have been caught on camera inside closed subway stations that were later said to be vandalized, and in another case a plainclothes officer helped a protester spray-paint graffiti before running into a police station.

One of the most high-profile claims is that police killed people who violently stormed a subway station in August. That power of belief is so strong that ordinary citizens have routinely gathered to lay flowers at the subway entrance. FactWire, a local investigative news outlet, recently concluded that no one died, and yet it is hard to change the minds of those convinced the government is rotten to its core.

When Lam, the city’s leader, held a public meeting with ordinary citizens, one person told her during the televised event: “I love life and won’t commit suicide.” Some protesters scream the statement during arrests, hoping to be caught on camera as an insurance policy.

In the war of information, Hong Kong’s government has been on the defensive since June when over a million people marched to protest a now-withdrawn extradition bill that would have seen suspects sent to mainland China for trial, where the Communist Party–controlled courts have a conviction rate of over 99 percent.

Officials have denied everything from emergency laws being used to seize assets to suggestions that the government would implement a curfew to claims that facial recognition technology had been deployed inside voting booths. But many Hongkongers simply don’t trust the official explanations.

Rachel Blundy, a fact-check editor for Agence France-Presse based in Hong Kong, said both pro-government boosters and those supporting the protests have spread false information. Her team has published over 50 pieces related to the protests, correcting false or misleading claims using visual evidence, eyewitness accounts, and official statements.

“There’s definitely a crisis in trust in officials in Hong Kong, which has allowed conspiracy theories to flourish,” she said. “Disinformation has amplified and intensified the emotion on both sides. It’s hugely powerful, and I don’t think there would have been six months of protest without some of the claims spread on social media.”

In refuting those claims, Blundy acknowledged she has had to rely more on videos and witnesses as the public’s faith in the government eroded and statements from the police or other departments need to be corroborated. But she admits that when it comes to larger claims of police cover ups, such as Chan’s death or the storming of a subway station by police, uncovering the truth would be a herculean task.

Unverified claims are not limited to the anti-government movement. Beijing’s supporters in Hong Kong frequently push the idea that the protests are fueled by foreign governments, usually spearheaded by the CIA, determined to stir up chaos. Their evidence for such claims usually rests on photographs of white people at protests, who ultimately turn out to be ordinary residents or journalists.

Members of Lam’s own cabinet pushed the idea some young women were “offering free sex” to male protesters. When pressed where she had heard such information, the official said it came from the friend of a friend of someone she met on a cruise.

Mo, the pro-democracy legislator, still believes there is a chance for the government to regain people’s trust. That would require more government concessions, and a reversal of what she calls Lam’s “total abandonment of our young people, anyone under 30.”

“Hong Kong is sliding into the black hole of authoritarianism, where the only person that matters is the one at the top,” Mo said. “Unless she starts to listen to the people, as a leader should in any developed society, I fear Hong Kong’s future will be very bleak.”