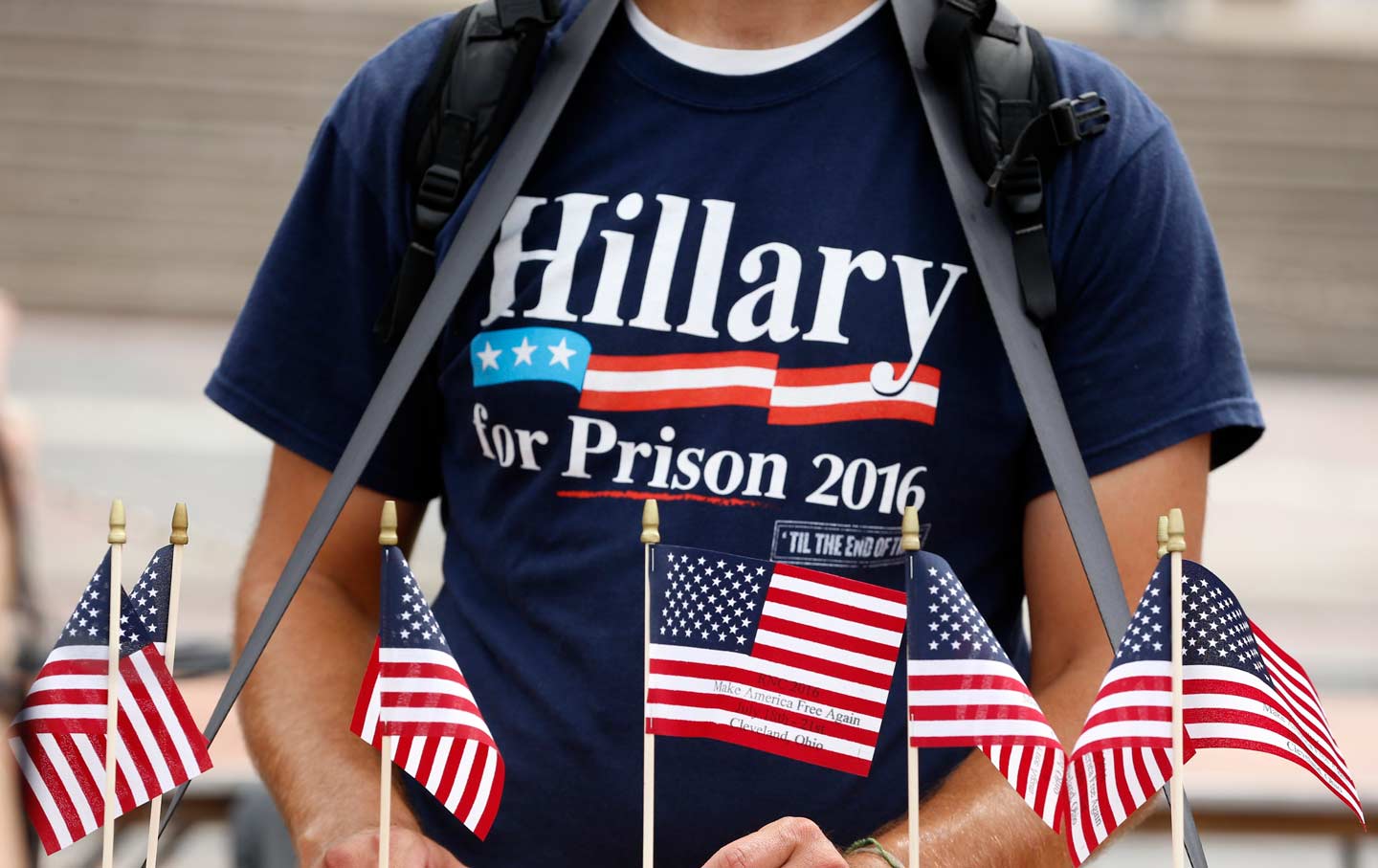 A pro-Trump supporter sells flags while wearing a “Hillary for Prison 2016” shirt at a rally near the Republican National Convention. (Reuters / Lucas Jackson)

I first realized Republicans fantasized about putting Hillary Clinton in jail back in January, at a retail campaign stop for Ted Cruz at a restaurant in Osage, Iowa. The conservative base was obviously furious about Benghazi and thought Clinton broke the law with her private e-mail server, but when the small crowd erupted at Cruz’s joke that “perhaps the presidential debate will have to be held in Leavenworth,” it was clear the idea of Clinton behind bars was truly firing people up.

Fast forward six months to Cleveland, where this has become one of the central themes of Donald Trump’s Republican National Convention. There is a plane circling the Quicken Loans Arena carrying a huge “Hillary for Prison” banner, courtesy of right-wing radio host Alex Jones. A large billboard truck with the same graphic is tooling around the convention perimeter.

Donald Trump himself has said bluntly that Clinton “has to go to jail” and has floated pursuing it if he’s elected president.

Even the worst reading of Clinton’s conduct with classified information would not dictate that she serve serious prison time. But Trump—and the political party that has now officially selected him as their nominee—is now mainlining a concept normally reserved for Third World countries: that political opponents should be locked up.

“We all know she loves her pantsuits, but we should send her an e-mail, and tell her she deserves a bright orange jumpsuit,” declared Colorado senate candidate Darryl Glenn, one of the few promising young stars the RNC was able to lure to the stage. Patricia Smith, whose son Sean died during the attack in Benghazi, said “I blame Hillary Clinton personally for the death of my son” and added, in unscripted remarks, that “she deserves to be in stripes.” Retired General Michael Flynn, who was rumored to be a vice presidential possibility, also agreed that we should “lock her up.”

This all built to Chris Christie’s speech on Tuesday, when he quite literally led a show trial of Clinton in prime time. “Well, tonight, as a former federal prosecutor, I welcome the opportunity to hold her accountable for her performance and her character,” Christie said. “We must present those facts to you, a jury of her peers, both in this hall and in living rooms around our nation.” He ticked off a long list of Clinton transgressions and got into a call-and-response with the audience, who would proclaim Clinton “guilty!” in unison. Several times, a “lock her up” chant broke out.

In several interviews, delegates and other RNC attendees were enthralled by the idea. For months they had been told by GOP leaders far and wide that Clinton had broken the law with her e-mail server, so many had the predictable belief that Clinton deserved to be punished.

Casey Voeks, a Utah delegate supporting Ted Cruz, said he that, while he never expected Clinton to be arrested, she should have been. “If I had done that, or many other people had done what she had done, their heads would have rolled. I would be in a lot of trouble,” he said.

“Bureaucracies are so established that I just didn’t see that playing out,” he continued. “That’s too good to be true. At that level people don’t go to prison.”

Many others took a less reasonable stance. “Hillary for Prison” T-shirts are ubiquitous around Cleveland, which are mocked up to look like official Hillary campaign shirts. (These have caused plenty of double takes from reporters who momentarily think they’ve spotted a Hillary supporter on the convention floor, until they see “for prison.”)

“Hillary represents the whore of Babylon,” said Leslie Sawyer, who was sporting one of the “Hillary for Prison” T-shirts outside the convention Tuesday night. “She murdered, she lied.”

“Her policies got a lot of people killed, and she doesn’t care about it. She doesn’t give a damn. Her opinion was, ‘What difference at this time does it make?’ when it comes to Americans dying,” added Sawyer’s friend, Alicia Tambourides, an activist who also traveled from Houston for the convention. “It’s more than just the e-mails. It’s not just Benghazi that makes her a criminal in my mind. There’s so many things connected to Hillary, you know. It has to do with her foundation [the Clinton Global Initiative], it has to do with all that.”

Clinton is likely to become president in less than six months. Republican elites have already said the party’s political strategy will be based mainly on opposition to Clinton and her policies. “The day after the election we’ll get back to being the anti-Clinton party,” Alex Conant, a veteran GOP strategist and adviser to Senator Marco Rubio, told Politico recently. “Which we’re actually good at being.”

Nobody doubts that. Whatever small glimmer of hope Clinton may be entertaining about reaching deals with Republicans or moving a stubborn Congress can be extinguished after this week in Cleveland. The party has reinforced the idea that Clinton is fundamentally unfit for not only the White House but civil society, and that it’s a miscarriage of justice that she has even retained personal freedom. How can Republicans in Congress later explain to the base they’ve agreed to compromise with her?