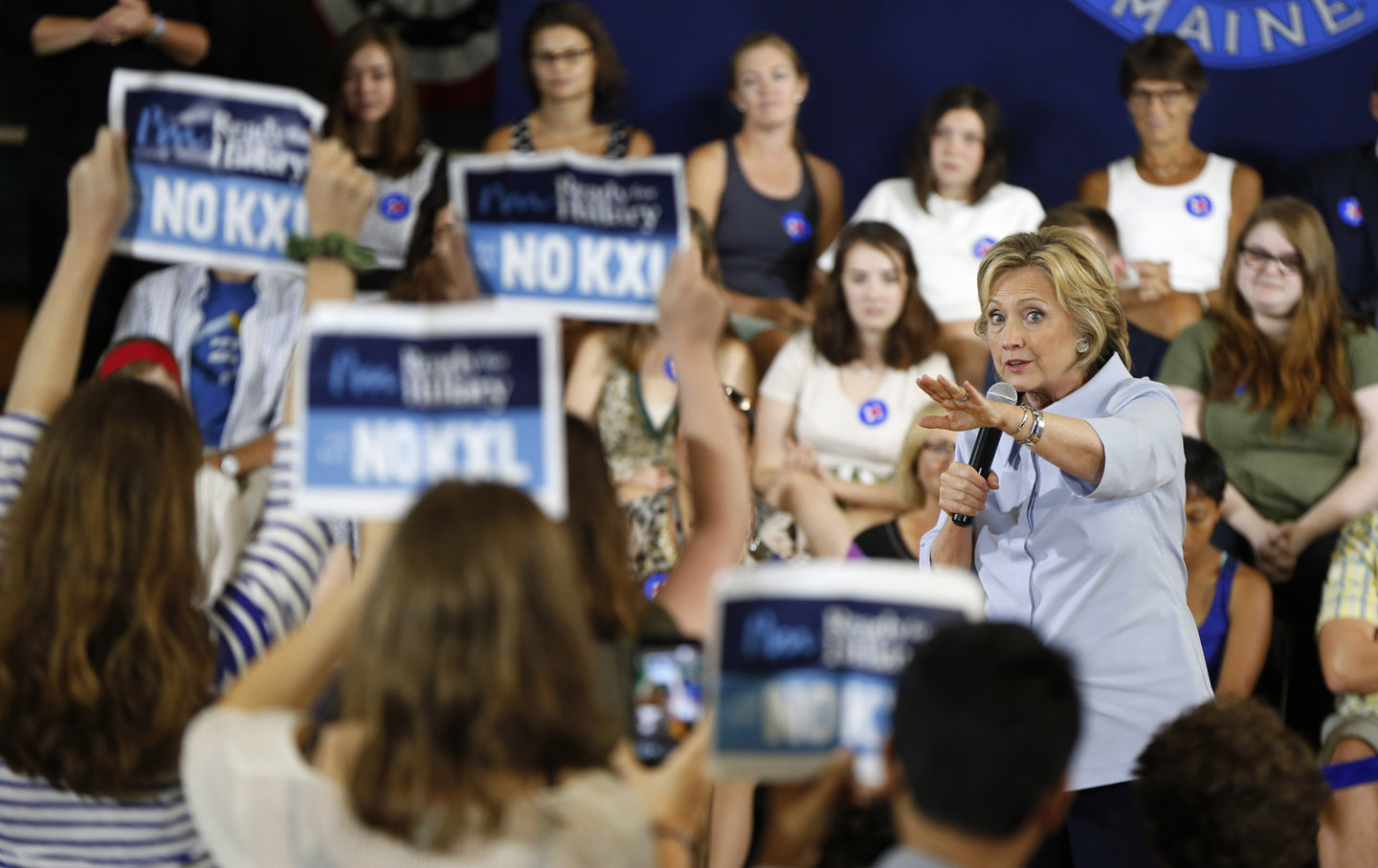 Hillary Clinton announced her position on the Keystone XL pipeline on Tuesday, putting an end to years of evasion. “I oppose it,” Clinton said at a campaign event in Iowa, “because I don’t think it’s in the best interest of what we need to do to combat climate change.”

Clinton’s evolution on Keystone indicates how much has changed in the political landscape that the pipeline must cross. In 2010, as secretary of state, Clinton said she was “inclined” to approve the project, arguing, “We’re either going to be dependent on dirty oil from the Gulf or dirty oil from Canada.” That construction would go forward seemed inevitable—until activists began a concentrated effort to bring attention to the climate implications of exploiting huge fossil-fuel reserves like the Alberta tar sands.

Now, years of demonstrations, arrests, and coalition-building has transformed Keystone from a fringe cause to a must-answer question in the presidential contest. “This became by far the biggest environmental fight of the decade,” said Bill McKibben, the writer and a founder of 350.org, one of the groups responsible for making Keystone XL the point of convergence for the climate movement, and consequently a national political issue. “That organizing forced everyone to take a long look at the tar sands and what it meant—eventually that would lead anyone who is not completely bought off to understand what a boondoggle this thing is.”

“Bernie was the first important politician to come out squarely against Keystone.”—Bill McKibben

Clinton’s condemnation of Keystone was mild: She called it a “distraction from the important work we have to do to combat climate change.” The subtext was that it has also become a distraction to her campaign. Clinton had repeatedly declined to take a position—“You won’t get me to talk about Keystone,” she promised in January—but was under increasing pressure from environmentalists and Democratic rivals Bernie Sanders and Martin O’Malley, who both oppose the pipeline. “I think Bernie was remarkably important,” McKibben said. “Bernie was the first important politician to come out squarely against Keystone…. He’s been exceedingly polite about not criticizing Hillary Clinton, but he has pointed out over and over again how strange it is that she has no position on this key question, and I think that’s a major factor.”

Clinton is not the only one on the left to call the pipeline a distraction; their argument is that Keystone, whether it’s built or not, is a tiny drop in the global dump of greenhouse gases. But Clinton’s move illustrates how Keystone, by providing a tangible rallying point, has strengthened the climate movement politically (at least, when it comes to the Democrats). It’s also popularized a broader principle: that most of the remaining reserves of fossil fuel must stay in the ground. With the three Democratic front-runners now unified on Keystone, McKibben and other climate hawks will be pushing them to extend the logic behind the Keystone fight to other extractive projects that the White House has considerable power over, like Arctic drilling, coal mining in the Powder River Basin, and fracking, and to adopt plans for an energy transition that take advantage of increasingly affordable solar power.

Climate and energy will be one of the issues in the 2016 elections on which the difference between the two parties will be starkest. During the midterms last year, many Democrats in tough races ran to the right on environmental issues, Keystone included. But the party is now signaling a greater appetite for taking the offensive: As Clinton was making her Keystone announcement, Senate Democrats unveiled legislation that mandates greenhouse gas emissions greater than the White House’s target, support for renewables, and higher energy-efficiency standards.

Clinton’s position may not mean anything for the fate of Keystone—the decision has always been, and continues to be, President Obama’s—but it’s not meaningless. “Indigenous people and farmers and ranchers along the pipeline route started this fight, and the rest of us joined in and worked very hard together,” said McKibben. “That’s a good reminder to us that as important as tweeting and Facebook and everything else is, just plain old organizing is often what starts to change political reality.”