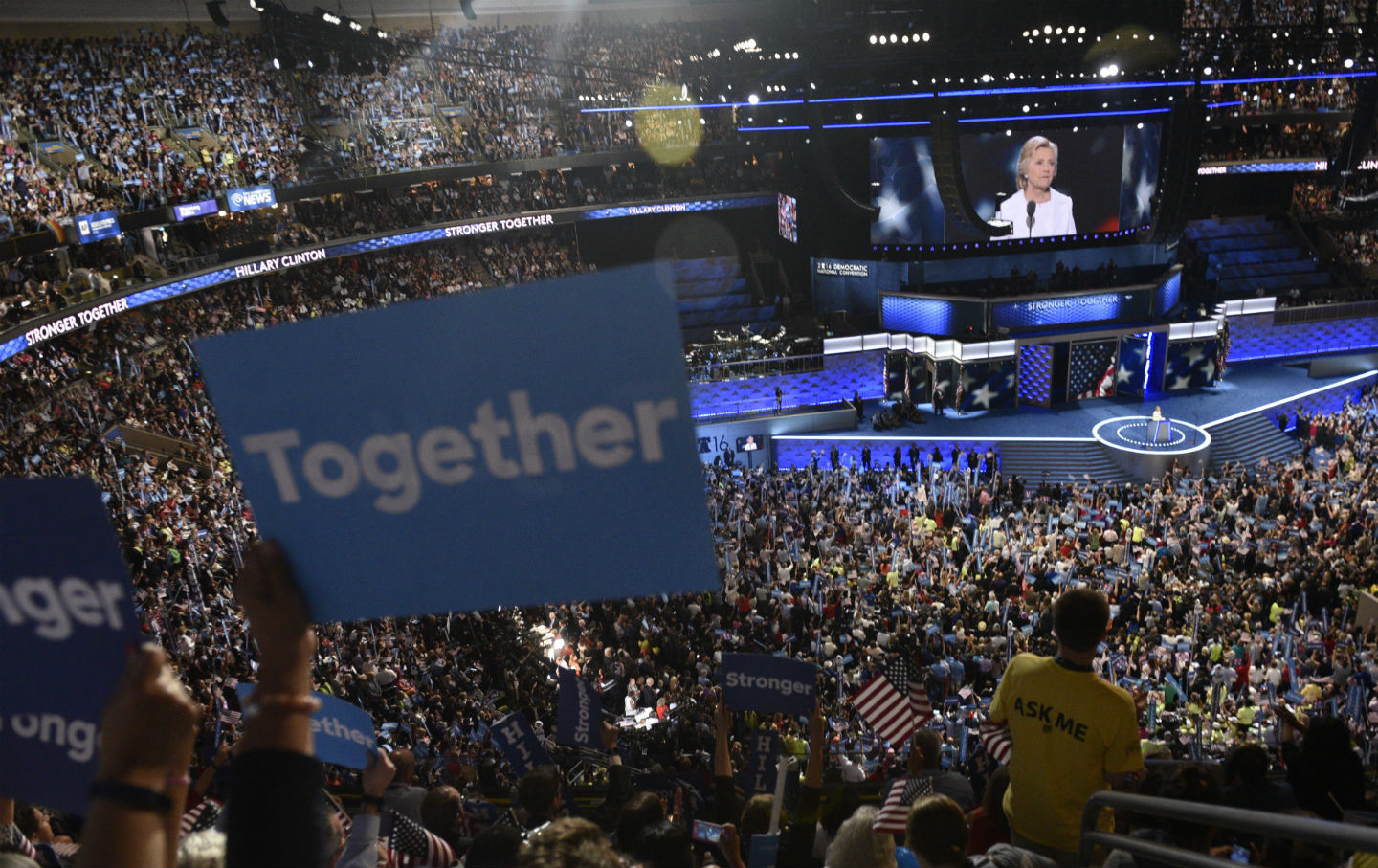 Philadelphia—Hillary Clinton accepted the Democratic nomination for president of the United States Thursday by thanking her supporters, as nominees invariably do, and by thanking her primary challenger, as this nominee needed to do.

“I want to thank Bernie Sanders,” Clinton declared at the opening of her address to a Democratic National Convention crowd that included almost 1,900 Sanders delegates, many of whom wore fluorescent green T-shirts to the hall as an indication that they remained loyal to the senator and to his promise of a “political revolution.”

Linking her campaign’s vision with proposals made by Sanders during the long nomination race was an essential signal from Clinton at the close of a contentious convention.

The nominee sent that signal by speaking directly to her challenger and to his supporters:

Bernie, your campaign inspired millions of Americans, particularly the young people who threw their hearts and souls into our primary.

You’ve put economic and social-justice issues front and center, where they belong.

And to all of your supporters here and around the country:

I want you to know, I’ve heard you.

Your cause is our cause.

Our country needs your ideas, energy, and passion.

That’s the only way we can turn our progressive platform into real change for America.

We wrote it together—now let’s go out there and make it happen together.

The cheers were loud, and sustained—from Clinton backers, of course, but also from a good many Sanders backers.

“It was as close to pitch-perfect as she could get,” said Javier Anderson, a Sanders delegate from the Bronx. “She said a lot of what she needed to say to Bernie Sanders supporters like me. She said she had heard us. She said she was invested in our ideas.”

That does not mean that every difference was settled. There are still “Bernie or Bust” Sanders backers who expressed frustration with Clinton and the Democratic National Committee; some walked out of the hall Thursday night, while others shouted objections. But most listened as Clinton delivered a speech that often echoed Sanders—with promises that “Wall Street, corporations, and the super-rich are going to start paying their fair share of taxes,” that “we should say ‘no’ to unfair trade deals,’ that “the minimum wage should be a living wage,” and that “we need to appoint Supreme Court justices who will get money out of politics and expand voting rights, not restrict them. And we’ll pass a constitutional amendment to overturn Citizens United!”

“Your cause is our cause.” —Hillary Clinton to Bernie Sanders and his supporters

By suggesting that Sanders backers have been heard, and by declaring that it will be her goal to “turn our progressive platform into real change for America” at the start of her speech, Clinton eased lingering tensions and claimed a space to tell her own story (“I get it that some people just don’t know what to make of me. So let me tell you…).

Clinton noted that the convention had made history: “We’ve reached a milestone in our nation’s march toward a more perfect union: the first time that a major party has nominated a woman for president.” And, in a speech where she decried “systemic racism” and embraced LGBTQ rights, she argued that “when any barrier falls in America, for anyone, it clears the way for everyone. When there are no ceilings, the sky’s the limit.”

In a classic convention message, Clinton made a case for herself as a unity candidate—not just for her party but for her country.

“I will be a president for Democrats, Republicans, and Independents,” she announced. “For the struggling, the striving and the successful. For those who vote for me and those who don’t. For all Americans.”

Clinton distinguished her unity theme from from the divisive politics of her Republican foe.

“We have to decide whether we all will work together so we all can rise together,” said the Democratic nominee, who noted that “Our country’s motto is e pluribus unum: Out of many, we are one.”

“Will we stay true to that motto?” she asked.

She answered with a reference to her opponent, to a former Republican president, and to a revered Democratic president: “Well, we heard Donald Trump’s answer last week at his convention. He wants to divide us—from the rest of the world, and from each other. He’s betting that the perils of today’s world will blind us to its unlimited promise. He’s taken the Republican Party a long way…from ‘Morning in America’ to ‘Midnight in America.’ He wants us to fear the future and fear each other. Well, a great Democratic president, Franklin Delano Roosevelt, came up with the perfect rebuke to Trump more than 80 years ago, during a much more perilous time: ‘The only thing we have to fear is fear itself.’”

“Now, we are clear-eyed about what our country is up against. But we are not afraid. We will rise to the challenge, just as we always have,” Clinton said, arguing that:

We will not build a wall. Instead, we will build an economy where everyone who wants a good paying job can get one.

And we’ll build a path to citizenship for millions of immigrants who are already contributing to our economy!

We will not ban a religion.

We will work with all Americans and our allies to fight terrorism.

Noting Trump’s Republican convention claim that “I alone can fix it,” Clinton asked: “Isn’t he forgetting troops on the front lines? Police officers and fire fighters who run toward danger? Doctors and nurses who care for us. Teachers who change lives? Entrepreneurs who see possibilities in every problem? Mothers who lost children to violence and are building a movement to keep other kids safe? He’s forgetting every last one of us. Americans don’t say: ‘I alone can fix it.’ We say: ‘We’ll fix it together.’”

Clinton made sure that delegates in the hall and voters across the country heard that she would be working with her primary rival, who warmly endorsed her on the first day of the convention.

“Bernie Sanders and I will work together to make college tuition-free for the middle class and debt-free for all!” she declared.

“We will also liberate millions of people who already have student debt. It’s just not right that Donald Trump can ignore his debts, but students and families can’t refinance theirs.”

“It’s the best I’ve heard her,” said James Zogby, the founder and president of the Arab American Institute, who was a Sanders appointee to the party’s platform drafting committee. Zogby was pleased by the references to his candidate. But he was excited by the talk of bold progressive policies. “These are good ideas,” said Zogby, “good ideas for Democrats to run on.”

Listen to John Nichols discuss the DNC on this week’s episode of Start Making Sense.