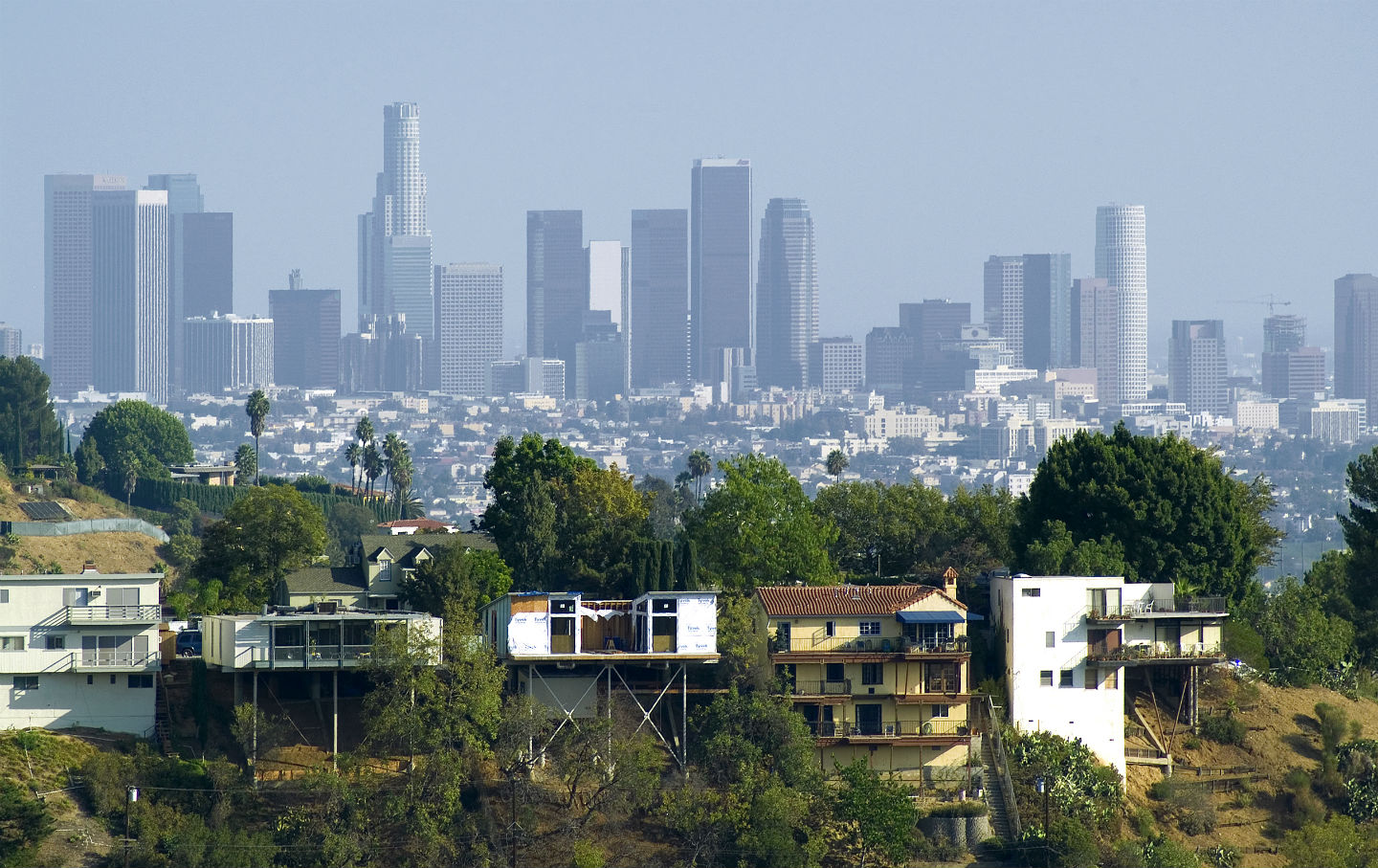 The City of Quartz is a city of contrasts, with some of the world’s richest and poorest neighborhoods existing side by side, divided along borders of race and privilege. But what would happen to its dramatically unequal economic landscape if the city created the highest wage floor in the country?

Progressive economists have mapped out a scenario of a $15.25 hourly minimum wage in Los Angeles, phased in by 2019. The idea is not as radical as it may seem: some City Council members are actively pushing this proposal, perhaps buoyed by the momentum of the Fight for 15 protests exploding nationwide, and the effort builds off the Mayor’s minimum-wage proposal of $13.25 an hour. It would also parallel an ongoing measure—now facing stiff opposition from business leaders—to lift the minimum hourly wages of local hotel workers to $15.37.

A $15.25 base wage would place Los Angeles just ahead of Seattle, which recently led the nation in passing a phased-in $15 wage (and enjoys higher median earnings and lower cost of living than LA). California’s current statewide minimum wage is $9 an hour. Many earn even less; wage theft costs local low-wage workers some $1 billion a year.

According to a report, authored by Economic Roundtable, UCLA Labor Center and Institute for Research on Labor and Employment, with support from the LA County Federation of Labor, the new floor wage would add $5.9 billion to the income of roughly 723,000 Los Angelenos. This translates into some $6.4 billion in sales, with benefits distributed progressively to alleviate the city’s world-class levels of inequality. Job growth would be spread across both high- and low-income neighborhoods, but many neighborhoods experiencing the largest growth in community earnings would be clustered in lower-income areas. And many businesses that employ the affected workers would be concentrated in “high income, economically resilient areas.”

Despite the conservative line that raising minimum wages is a “job killer,” the report cited analyses indicating that the macroeconomic benefits outweigh the costs in terms of stimulating economic activity and earnings (with job losses partially offset by more than 45,000 newly created jobs). The cost for consumers would be manageable, since “Six of the seven industries [most affected] are in the service sector where consumer demand is expected to support necessary price increases.”

In addition, the sectors benefitting the most are typically in industries that are intrinsically local, like restaurants, private security, childcare and home health care. And only 12 percent of low wage workers “produce goods that leave the local economy,” so the overall economic impacts would be relatively self-contained.

Similarly, as incomes rise, poor households will rely less on public benefits, which disproportionately affects people of color. Researchers estimate that after five years, the city will see “a total annual reduction of $314 million in public assistance payments,” such as medical assistance and food stamps. The report attributes “Over 60 percent of the reduction…to reduced public assistance benefits for Latino workers whose increased earnings will lift them out of the social safety net.” The wage hike would benefit “over 90 percent of low-earning Latino workers.”

The issue of gentrification in Los Angeles may be another factor, with higher wages potentially mitigating the damage of housing market volatility. According to Economic Roundtable researcher Patrick Burns, the effect on the housing market should be positive in terms of raising local income:

the beneficiaries of the wage increase will be bringing those dollars home to LA’s traditionally higher poverty areas: South LA, East LA/Boyle Heights, Wilmington, and the SE San Fernando Valley. … The influx of earnings to those workers and their communities will enable them to support more and higher quality local businesses, supporting more nearby jobs.

At the same time, LA is a global city, so while an internal wage initiative can strengthen working-class neighborhoods, it wouldn’t necessarily buffer against the displacement and destabilization often driven by hypertrophic real estate development. Burns added, “there is so much private and public investments going on in the region”—including large-scale capital flows like “the influx of real estate investment from Canada, Korea and China” as well as general local growth and infrastructure development—“that gentrification seems to be a constantly—albeit sometimes slowly—churning force.”

Yet while LA is vulnerable to outside economic forces, the benefits of the higher minimum wage could spill beyond the city limits, by helping lift up workers in outlying areas. Due to the city’s regional economic clout, the researchers conclude, “[t]here is a strong prospect that higher wages will strengthen the city’s capacity to attract the most capable workers, pressuring neighboring businesses and cities to increase their minimum wage levels to avoid losing their most productive labor force to Los Angeles.” Though $15.25 an hour wouldn’t provide a living wage for many workers (LA’s current median wage is about $20 an hour), the regional analysis shows that the job impacts could set off a regional virtuous circle.

But the report also points out that low wages can’t be fixed in isolation, and that resolving structural inequality must involve an array of systemic development issues.

In many cases, these workers are making well below even the current minimum wage because they are not in the formal economy, and many are undocumented immigrants. A robust enforcement regime is needed to bring those workers into the aboveground workforce. This would include “a funded city authority to address claims, meaningful sanctions, and protection from retaliation.” Moreover, in the long term, the researchers say that the wage must be indexed to the cost of living, as various states have done to ensure the base wage doesn’t erode over time like the federal minimum has done. (A fast food worker’s starting pay today may be worth less in real dollars than his grandfather’s, feeding into an economic stagnation in which intergenerational mobility has steadily declined in past decades.)

Despite its scandalous extremes of rich and poor, a modest rise in LA’s wage floor might help bridge the gap between Skid Row and Beverly Hills.