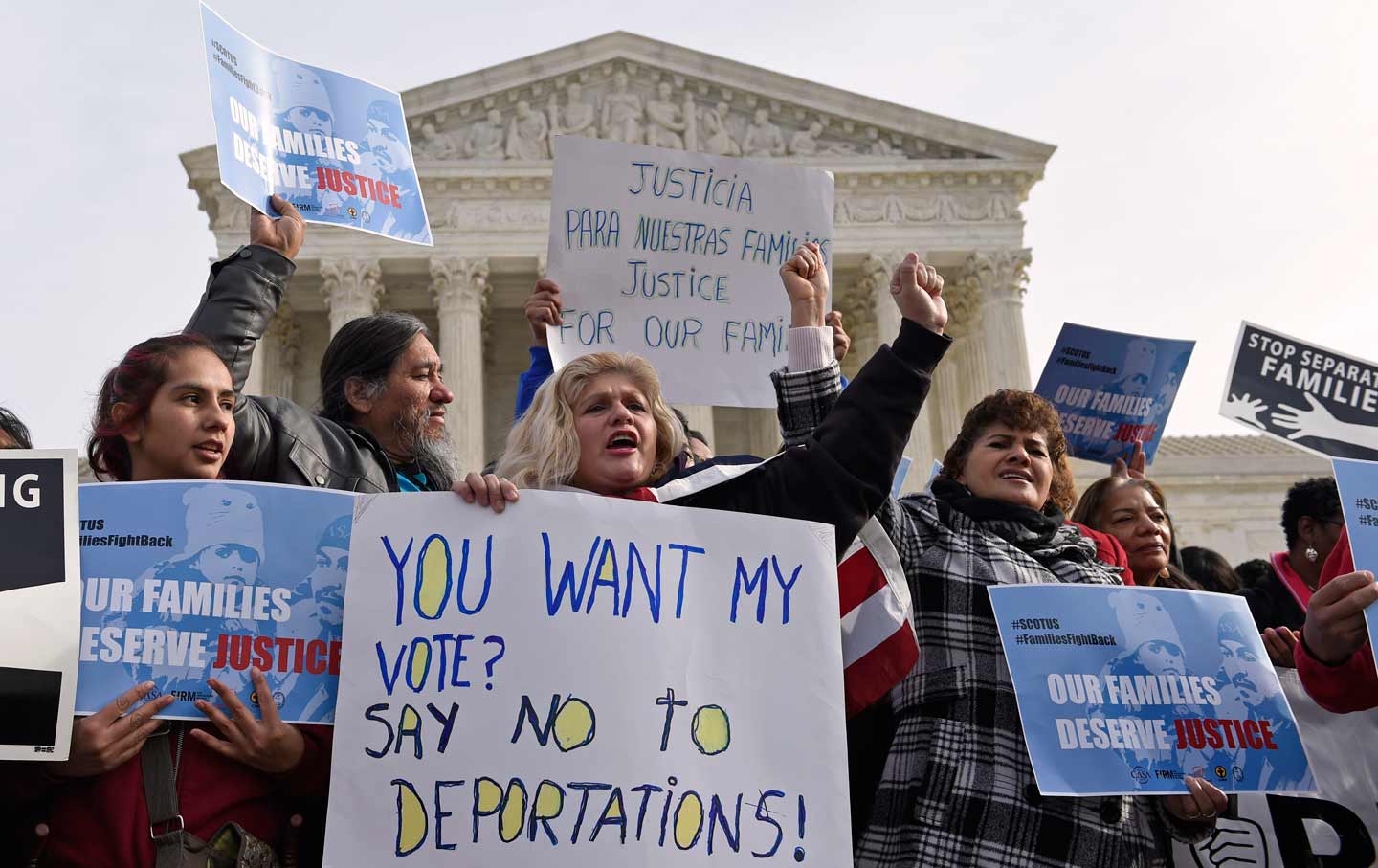 Members of CASA de Maryland participate in a immigration rally outside the Supreme Court on January 15, 2016, in Washington. (AP Photo / Susan Walsh, File)

Want to know why the Department of Homeland Security, starting with the New Year, began stepping up midnight raids and rushing the expulsion of undocumented Central Americans and Mexicans? Washington’s ambassador to El Salvador, Mari Carmen Aponte, provides at least a partial answer.

Mounting criticism in El Salvador led Aponte, on January 7 (just five days after the raids started), to hold a press conference making clear the reasons for the round-ups, which have targeted women and children and broken up families: deterrence. “It is important,” she said, “to emphasize that there are clear and grave consequences for families and individuals that don’t comply with immigration law.” “To enter the United States without documents,” the ambassador continued, “doesn’t confer the right to stay in the country.”

Many liberals have found the policy inexplicably brutal, coming from a president who often telegraphs his humanity and sensitivity to suffering. It is, of course, the very nature of the modern state to combine spectacle and the covert, to perform justice while practicing cruelty. Still, why announce the policy just before Christmas, as the administration did? Why call such attention to an initiative that seems to enact Donald Trump’s presidential agenda, especially when the administration had already been deporting Central Americans and Mexicans at a healthy clip (nearly 90,000 to Central America alone in 2015)?

Ambassador Aponte, in her press conference, answers that it is about sending a message to Salvadorans and other Central Americans: Stay put. The most generous interpretation is that the White House, as it faces a Supreme Court challenge from right wing–governed states to its authority to regulate immigration, and as it tries to advance some kind of immigration reform (though that goal seems to have fallen off the public agenda), is trying to show that it can control the nation’s borders. That explanation is little consolation to the people who now live in fear of the 4 am knock on the door (“one in five migrants report being deported between 10:00 p.m. and 5:00 a.m.”), to Latino businesses that face empty stores and restaurants, to those terrified of being pulled off of public transportation going to work. Guatemalans, Mexicans, Salvadorans, and Hondurans are being deported to the most violent places on earth—the US recently shuttered the Peace Corps in El Salvador because it was too dangerous. And to the more than 1000 Guatemalans deported in the first two weeks of 2016, including mothers and children.

Ambassador Aponte, repeating the administration’s official line, says all deportations will be conducted according to the rule of law, that migrants with pending appeals will have their cases heard. That is a lie. The deportation regime is completely dependent on the interests of privatized detention companies, with an over-militarized and arbitrary federal bureaucracy that terrorizes those that live under its thrall, as Amy Kamp reports in The Austin Chronicle.

“Deterrence by deportation” does not work. Migrants don’t come to the United States because, as Ambassador Aponte argued in her press conference, of “lies” told by smugglers that, once here, you can’t get deported. They come because their countries have been destroyed by US policy. Every single “push” factor driving the refugee crisis is or has been created by Washington and Wall Street: The transnational gangs and drug cartels that rule large swaths of Central America and Mexico are direct blowback from the Cold War (in the case of Central America) and the War on Drugs (Mexico). Washington’s relentless promotion of trade and financial liberalization and its push for biofuels and mining have destroyed regional agricultural markets and driven down wages, leading to rural dislocation. The disaster in Central America and Mexico, as I and many others (see especially Laura Carlsen at CIP Americas) have described, can be traced back to Bill Clinton’s three signature Latin American initiatives: escalation of the drug war (Plan Colombia); economic liberalization (NAFTA, the North American Free Trade Agreement, which paved the way for similar treaties with Central America and Colombia and will culminate in the Obama-backed Trans Pacific Partnership); and the militarization of the Mexican-US border.

The Obama administration inherited the disaster, but continues the policies that perpetuate it (see the 2009 coup in Honduras).

In El Salvador, it was none other than Ambassador Aponte—today lecturing Salvadorans about the pedagogic utility of deportations—who three years ago, in 2012, threatened to withhold critical development aid unless El Salvador passed a major privatization law. (Hilary Goodfriend, a researcher based in El Salvador who works with the ever-vital Committee in Solidarity with the People of El Salvador, discusses the law here).

It is a job requirement of US envoys to El Salvador to be skilled in the art of the threat. And Aponte, named ambassador in 2010, is a pro. In particular, she’s been tasked with making sure the former insurgent FMLN, which first won the presidency in 2009 and was reelected in 2014, reconciles itself to neoliberal reality. She’s menaced the government about the need to buy corporate manufactured GMO seeds, insisting that the FMLN’s seed-cooperative program violates the terms of the Central American Free Trade Agreement (Martha Pskowksi writes: “In 2011, the first FMLN administration began buying 88,000 quintales of corn seeds annually from eighteen Salvadoran cooperatives to distribute to 400,000 campesinos as part of the Family Agriculture Plan”). Last year, Aponte warned the FMLN that US aid would be withheld if it continued to publicly support Venezuela.

In Salvador, at least, Aponte is the face of the vicious circle: economic liberalization; militarization; deportation.