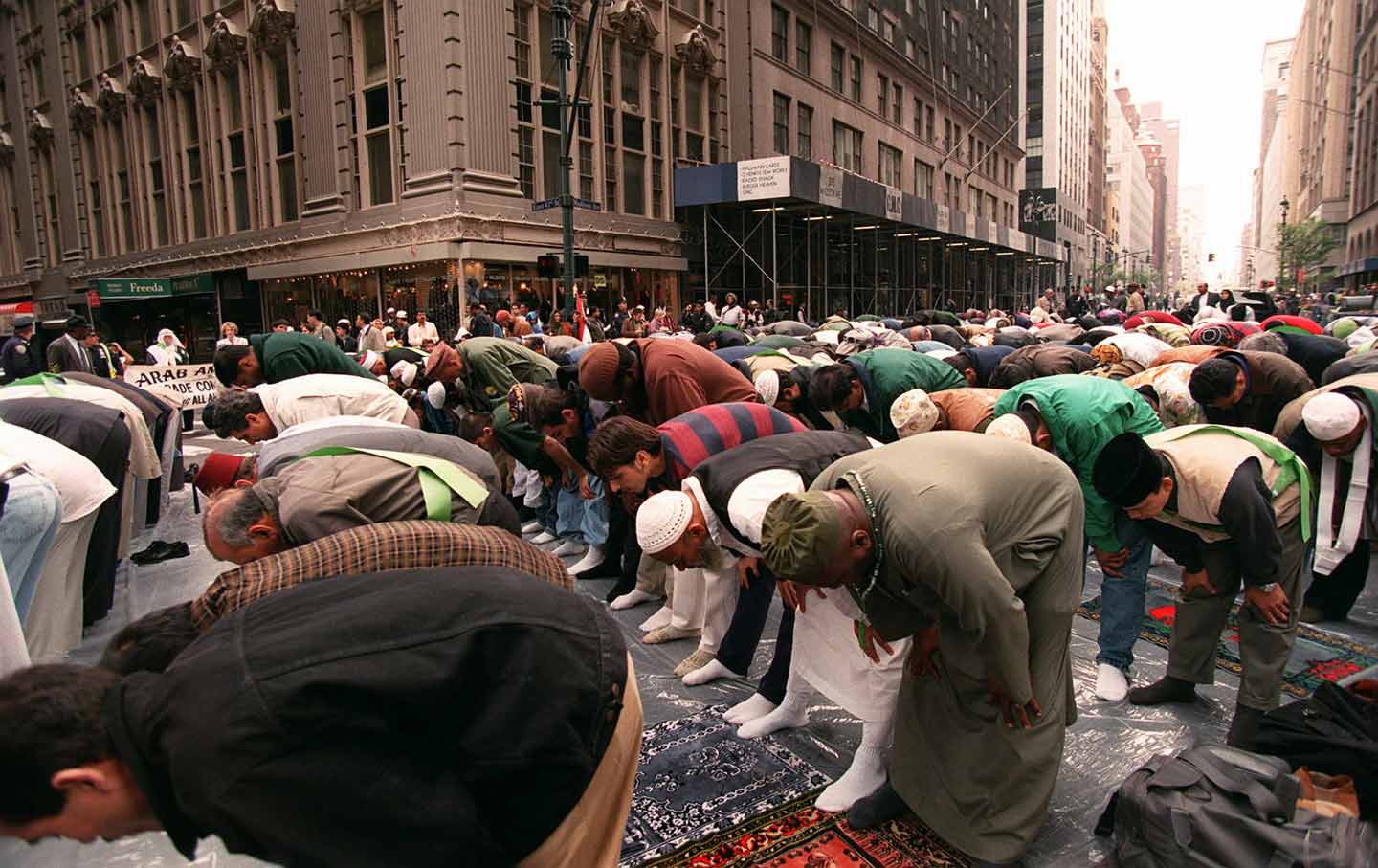 On Friday evening, when news of the Paris attacks spread, and reports that ISIS had taken responsibility for them emerged, Muslim, Arab, and South Asian activists in the United States began a process that has become all too familiar in the 14 years after 9/11. In the midst of expressing their grief and horror at these acts of terrorism, Muslim, Arab, and South Asian advocates are also placed in the position of having to condemn attacks that occur in the West, and to monitor for a backlash against their own communities.

Since 9/11, activists in the United States have come to expect this backlash in multiple ways. It includes anti-Muslim rhetoric in news coverage by mainstream media, calls for profiling by political leaders and policymakers, acts of discrimination and violence targeting Muslim, Arab, and South Asian communities, and government actions and policies that single them out in the name of national security. “As we join the rest of the world in mourning the innocent victims, we also cautiously prepare for potential backlash,” said Linda Sarsour, executive director of the Arab American Association of New York. “Mosques are on high alert, and conversations are happening within organizations and families.”

This time around, the signs already point to an uptick in anti-Muslim sentiment in the United States, given the immediate responses in conservative media outlets and remarks of some elected officials, including South Carolina’s representative, Jeff Duncan, who tweeted in the hours after the Paris attacks: “How’s that Syrian refugee resettlement look now? How about that mass migration into Europe? Terrorism is alive & well in the world.”

Xenophobic and divisive rhetoric only reinforces a climate of fear and suspicion of Muslim, Arab, and South Asian communities that often results in racist attitudes and actions. Over the weekend, a mosque in St. Petersburg, Florida, received a threatening voicemail that said, “I personally have a militia that’s going to come down to your Islamic Society of Pinellas County and firebomb you, shoot whoever’s there on sight in the head. I don’t care if they’re [expletive] 2 years old or 100.” In Orlando, a Muslim family apparently found a bullet hole in their garage door. A Sikh man in Canada, Veerender Jubbal, found that his picture was being PhotoShopped and circulated over social media, characterizing him as a terrorist.

In addition to ensuring that communities are safe and aware of their rights in light of situations such as these, Muslim, Arab, and South Asian advocates are also preparing for the loud drumbeat of national security and immigration policies that target their communities. “Only three days have passed since the tragic attacks in Paris, and already our elected officials are already looking to reintroduce some of the most repressive policies and practices in the United States that unfairly target and demonize Muslims,” said Kalia Abiade, advocacy director at the Center for New Community, which monitors far-right movements in the country.

For example, Representative Peter King of New York, responsible for the infamous King hearings in 2011, which fueled the climate of anti-Muslim hate in the country, said on a New York talk radio show: “We have to have more surveillance in the Muslim community…. the reality is that’s where the terrorism is coming from. Doesn’t mean that all Muslims are evil, doesn’t mean all Muslims support terrorism, the overwhelming majority do not. But the reality is that’s where the threat is coming from.” In response, Muslim Advocates, a national civil-rights organization, and the Interfaith Alliance have released a statement expressing their concerns that remarks from some political leaders “send a dangerous signal that our American Muslim neighbors are a threat, worsening the environment of anti-Muslim bigotry and hate crimes.”

In addition, governors of 14 states have announced that they will not accept displaced Syrian refugees in their states, claiming that closing the nation’s doors is a way of guaranteeing the safety of Americans. In response to Governor Rick Snyder’s announcement of a suspension of refugee resettlement efforts in Michigan, Rashida Tlaib, manager of the Campaign to Take on Hate, noted: “This decision creates division and indirectly places blame on innocent victims of the same type of violence in Paris, Beirut, Baghdad and Syria.” More anti-refugee rhetoric is likely to emerge at a House Judiciary Committee hearing on the Obama administration’s program to accept Syrian refugees, occurring later this week.

The calls for profiling, surveillance, and xenophobia in the wake of the Paris attacks do not occur in a vacuum or without precedent. Over the past 14 years, there have been reports of surveillance of mosques, restaurants, sports games, and even Muslim Students Associations by law enforcement. In addition, the Obama administration’s programs to counter violent extremism domestically—which focus almost exclusively on American Muslims—stigmatize targeted communities even further. More recently, anti-immigrant and anti-Muslim forces have been linking forces to fuel a climate of xenophobia. Abiade from the Center for New Community says, “Anti-refugee sentiment was a motivating factor for several of the armed rallies planned in October at mosques around the country.” In short, since 9/11, the scene has already been set for a backlash in coming weeks and months, in large part due to federal infrastructure and resources allocated towards the targeting of Muslim, South Asian, and Arab communities, and to the rise in anti-Muslim and anti-immigrant groups in the nation.

As a result, advocates are concerned that they will be able to make minimal progress on changes to draconian post-9/11 policies. Darakshan Raja, co-founder of the Muslim American Women’s Policy Forum, notes that the current environment likely limits the ability to combat a range of policies, including profiling, the administration’s stigmatizing program for countering violent extremism, and the militarization of law enforcement agencies. In addition, Raja observes that the allocation of greater resources to the “war on terror” may mean that there will be less focus on “key services such as education, employment, healthcare, and crime victimization services for all communities.”

In this bleak landscape, there are some bright spots that indicate potential for progress, especially in the context of narrative shifts. According to Rebecca Lenn at Media Matters, which monitors conservative misinformation in the media, in the wake of the Paris attacks anti-Muslim sentiment has not been universal and “the most outlandish and explicit anti-Muslim rhetoric has largely been contained to the usual suspects.” This success comes as the result of sustained efforts by Muslim, Arab, and South Asian advocates to hold both media and politicians accountable for their rhetoric over the past 14 years.

We have also heard since the Paris attacks important exhortations to refrain from demonizing entire communities. For example, Democratic presidential contender Martin O’Malley said, “For the days to come we’ll hear speculation, and sweeping generalizations about our Muslim brothers and sisters around the world who largely condemn these acts.” During a moment of silence for the victims of the Paris attacks at an NFL game on Sunday, when a fan yelled out an anti-Muslim remark, Aaron Rodgers publicly expressed his disappointment. “It’s that kind of prejudicial ideology that I think puts us in the position that we’re in today, as a world,” he said. And actor George Takei, whose musical, Allegiance, traces his own family’s experience with the internment of Japanese Americans, released a statement after the attacks in Paris that cautioned against identifying “immigrants and refugees as the enemy as a result of these attacks, because they look like those who perpetrated these attacks.” On social media, with ally groups, and even among friends, advocates are noticing a discernible shift. As Raja from the Muslim American Women’s Policy Forum noted, “There are more people speaking out—and that gives me hope.”

Perhaps America’s appetite for overt Islamophobia is decreasing, especially in contrast to the heightened level of biased rhetoric that occurred after the 9/11 attacks, in the midst of the controversy over the Park51 community center in Lower Manhattan in 2010, and even in the wake of the Charlie Hebdo tragedies in Paris earlier this year. According to Fahd Ahmed, the executive director of Desis Rising Up and Moving in Queens, “There is definitely a shift in a better direction with less collective blame being projected onto Muslim communities. Still, as long as we fail to examine the root causes, our policy and messaging prescriptions will only be band-aid attempts.”

Indeed, the real test will be whether Americans of all races and faiths will call upon lawmakers to cease the use of divisive, xenophobic, and racist rhetoric, and to raise our voices against policies and practices that criminalize and target Muslim, Arab, and South Asian communities. That will determine whether a collective national consciousness of the impact of xenophobia and anti-Muslim sentiment actually translates into meaningful changes in the lives of a group of people who feel singled out on the basis of their faith, national origin, and immigration status, day after day in our nation.