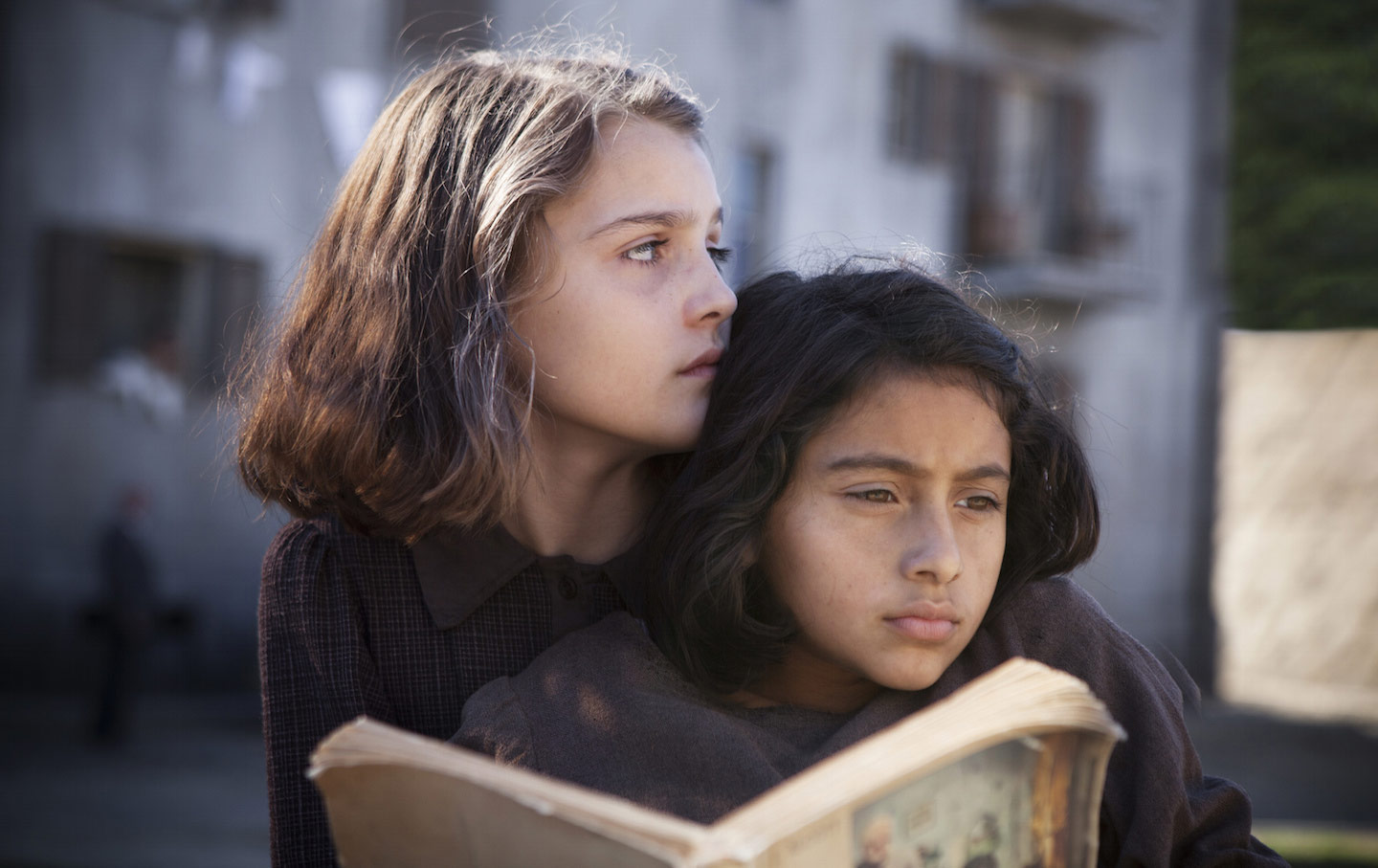 In the first episode of My Brilliant Friend, the feverishly anticipated HBO adaptation of Elena Ferrante’s novel of Neapolitan girlhood, the story’s child protagonist, Elena Greco, hardly speaks. As the series begins, we see Elena at 60, and then as a girl; the youthful Elena is played by Elisa Del Genio, an actor whose performance is mostly reactive, her angelically mournful face offering viewers an empathetic keyhole into her world. When she speaks, we are primed to pay close attention. From its first moments, My Brilliant Friend dedicates itself to the high drama—the joy, trauma, and mystery—of what many would call an unremarkable life, which is to say, in many ways, a woman’s life, and a girl’s.

In the bleak, impoverished neighborhood of her 1950s youth, the older Elena reflects in her voice-over, mothers were “as angry as starving dogs…. The men were always getting furious, but then they calmed down, whereas the women flew into a rage that had no limit and no end.” The viewer, watching young Elena react silently to a vicious brawl between the mothers in her building—a fight over the scarce love of men; a contest between the starving—is given a chance to see the darkness of the future that she is hurtling toward. There will be many other moments that afford a similar view.

The viewer experiences this scene as a hauntingly faithful gloss on the novel: Elena imagines tiny, swarming insects crawling up the stairwell of her building and into the apartments, the beds, and finally the women, a cockroach-like infestation of rage. Elena’s narration about these furious women, lifted directly from the book’s text, is now dramatized. The series itself feels like an exploration of where language can take us in such a medium, and where we must leave language behind and let the images do the work—and every viewer who was once a reader of Ferrante’s novel will have different answers to this question.

Yet the series is at its most arresting when it shows us not just Naples through Elena’s eyes, but the part of it that has the power to take her somewhere else. Elena’s best friend, and the character we meet through her pained and loving memory, is a girl named Lila Cerullo (Ludovica Nasti in the first episodes of the series): aggressive where Elena is silent, rebellious where she is obedient, and even smarter than her studious friend. In Lila, Elena finds her opposite and her equal, and the series’ muted cinematography does not allow any spectacle to upstage the luminous intensity of the two girls’ faces, their growing friendship and fragile trust. This series knows what it is about, as well it should—the project was overseen by Elena Ferrante.

The popularity of Ferrante’s work—and especially her quartet of Neapolitan novels, which American readers first tasted with the 2012 translation of My Brilliant Friend—is a publishing phenomenon. The question everyone loves to ask about cultural phenomena in general—Should people want this as much as they do?—diverts the conversation from a much more interesting course: asking why such hungers lie within us, in vast and untapped reserves. Why have female readers longed, with such startling intensity, for stories about dystopian battles royale, or Mormon vampires, or weepily sadistic tycoons—or, now, stories of deep female intimacy? And why is one of these things not like the others?

I saw people reading Ferrante’s novels for a long time before I had any idea what I was seeing. Mostly, I saw women I thought of as being defined by a ferocious intelligence—an intelligence that inevitably shone with rage when confronted with the bare facts of life as an American woman—succoring themselves with the novels. Ferrante’s publisher, Europa Editions, seemed to be positioning the books as comfort objects; the Neapolitan novels were released with covers in a pastel palette that seemed designed to coordinate easily with Instagram spreads of matcha lattes and macarons. Sandra Ozzola Ferri, Europa’s co-founder, called the series “brutal” and “a true masterpiece.” She called the covers—which she designed, with Ferrante’s input—“kitsch.”

“In a literary marketplace where the very image of a woman is seen as antithetical to literature,” Emily Harnett wrote in The Atlantic, “Ferrante’s covers take an important stand. If her covers are a ‘game,’ then readers at least know the price of admission: the willingness—or the humility—to be seen reading books about women in public.”

There is also something deliciously subversive about disguising an incendiary exploration of gender in its own gendered clichés. Ferrante’s novels, coyly camouflaging themselves in the publishing industry’s signifiers of female experience—brides, blue skies, and scenic beaches—are about flesh-and-blood womanhood: the power, the horror, the dark and unwanted thoughts; the feeling of everyday annihilation that comes with an existence defined entirely by other people’s ideas about you, other people’s needs; the forms of violence that appear, inevitably, in such a life. A woman can sit quietly in a café reading a Ferrante novel and never advertise the fact that she is destabilizing the very foundation of her gendered obedience.

HBO’s adaptation of My Brilliant Friend has shed some of the novel’s camouflage. From the beginning, it is impossible to experience as anything other than very serious, even grim; but it is also emotionally immersive in a way that feels, ultimately, nourishing. The series’ ability to provide comfort, even as it delves into the darkest realities of its characters’ lives, seems like a clue as to what these novels offered to the readers who made them a cultural turning point.

From the very first scenes, the viewer is in a world where there exists no time between fragile girlhood and exhausted, premature old age. Elena and Lila come together as friends when Elena hands Lila a rock to throw at a taunting boy, yet this first moment of trust ends not in triumph, but in pain: Pridefully, Lila refuses to run away, and so the boy has the chance to take aim with the rock again. This time, he manages to hurt her. Such are the choices these characters have: What does their world have to offer them, except each other?

The first episode of My Brilliant Friend manages to linger on its scenes and characters in a way that gives the viewer a feeling of intimacy with its setting—but it also wastes no time in getting the plot underway, and it ends by sending the girls off to their confrontation with the neighborhood boss, Don Achille. This journey is the beginning of the one that the series’ eight episodes will chronicle: not just the two girls’ encounter with this character, but also their journeying into the cramped corridors of a world controlled by men, daring to ask for what no one has ever thought to offer them. There will be some triumph; there will be much more pain. But even knowing this, it will be difficult for anyone to stop watching My Brilliant Friend if they find themselves craving the nutrient it offers: an exploration of female intimacy.

The question of whether a woman’s experience, in all its emotional depth, can be universal—i.e., human—is both boring and pointless: Of course it can, and of course it can do much, much more besides. American popular media has a tendency to depict female friendship as a set of training wheels for romantic relationships, or as a sickroom of blurred identities and violence: a whistle stop on the way to monogamy or murder. My Brilliant Friend offers a banquet for those accustomed to crumbs. It promises not to make you feel good, but to make you feel. And perhaps, in the end, there is nothing surprising at all about audiences finding solace in My Brilliant Friend at the wintry close of 2018: It is a story about girls and women finding self and strength in each other in a reality that makes their psychic survival all but impossible. It tells women what they can still have, in a social order that denies them seemingly everything else. And it depicts the radicalizing experience of being seen.

A TV series is not a novel (even if it comes from a channel proclaiming that it doesn’t make TV) but the show’s willingness to direct all the viewer’s attention to the power of its young actors’ performances, and to let their faces take up the labor that language can no longer perform, feels faithful not just thematically but also ethically. It also feels in keeping with Ferrante’s work. In 1991, when she informed her publisher of her decision to maintain her anonymity, Ferrante wrote: “I believe that books, once they are written, have no need of their authors.” My Brilliant Friend is a story about girlhood—and now, on the screen, with the guidance of its writers, it is in the hands of the girls.