Spend enough time in the workforce, and you’re bound to have a job where the bulk of daily activities—though they may be taxing, exhausting, harrowing—have nothing to do with getting work done.

Such is the case for Millie, the narrator of Halle Butler’s second novel, The New Me. Millie is 30 years old, rudderless, and disgruntled to her core and is a long-term short-term employee: a seasoned temp. It’s familiar territory for Butler; she temped throughout her 20s to fund creative work, and her first novel, Jillian, follows the life of an embittered young medical secretary.

At the start of The New Me, Millie is 10 days into a receptionist gig at a boutique Chicago furniture showroom, where she is paid $12 an hour to stare at an unringing phone. Her manager and primary antagonist is Karen, the senior receptionist, a small-fry Machiavelli who instantly dislikes Millie—not for her performance, which is adequate, but for her awkward manner and shabby clothes.

Millie has what anthropologist David Graeber would call a bullshit job; it’s meaningless, and she knows it. There’s close to nothing for Millie to do, less than an hour of actual work per day, and it’s not for lack of initiative. When Millie asks Karen for additional tasks in an attempt to prove her value, she is met at first with irritation and later with a cruel act of sabotage. Karen is a perfect villain for the LinkedIn age: her warped sense of professionalism has usurped all other values.

For Millie, every day of work is “another fucking waking nightmare.” She detests Karen, her other coworkers, and the few clients she speaks with over the phone. Her schedule is blank, but beyond the occasional fruitless Google search (“foods that reduce stress”), she’s too anxious for the customary desk-job practice of mindlessly consuming the Internet. Even a break-room sugar fix can’t dull her torment. A bite of a doughnut becomes a “disgusting bolus” as soon as Millie swallows.

Despite the unmitigated badness of the job, Millie longs to go from temp to perm. The stability and pay bump, she thinks, might allow her to become “calm, cool, self-assured, self-reliant,” a better friend and daughter, the titular “new me.” Most of these daydreams hinge on consumption: ordering deliveries from Whole Foods, buying gifts for her mother, paying for yoga classes. But Millie can only halfway fool herself. When it seems she might get a permanent offer, she’s overcome with hope and dread. It feels, she thinks, “like someone I love has just been admitted to the hospital.” Things, of course, go awry. 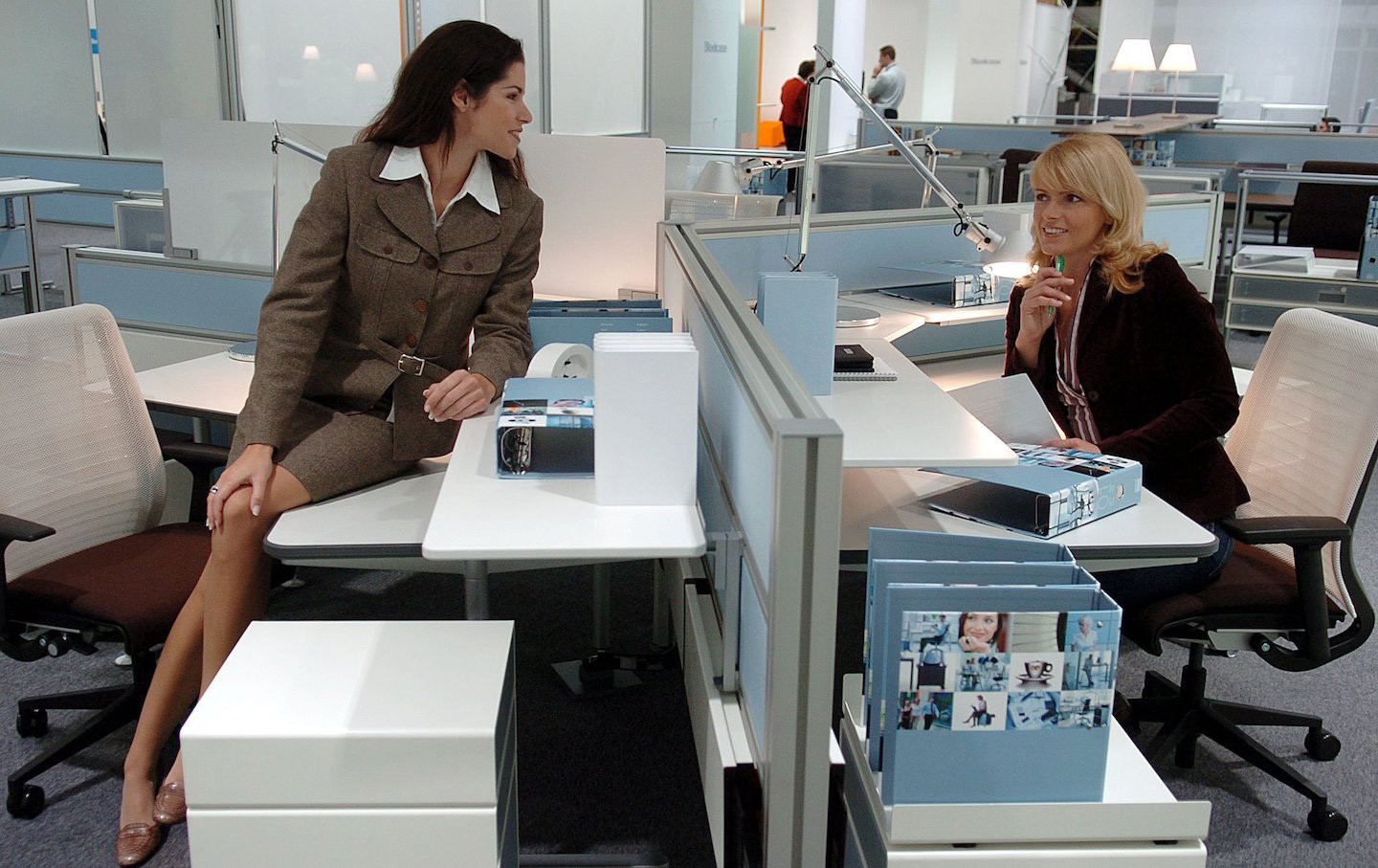 Two models give an example of a communicative work environment with furniture by manufacturer Steelcas-Werndl at the Orgatec trade fair in Cologne, Germany, 2004. (Photo by Oliver Berg / picture-alliance / dpa / AP)

Interspersed with Millie’s narrations are short third-person sections that depict the interior lives of several youngish women in Millie’s peer group, including a few coworkers and a downstairs neighbor. These characters are not transparently miserable like Millie, but they’re certainly not flourishing. One woman deals with a stressful workweek by ditching her friends to get high and binge on a pile of snacks. Another prepares anecdotes and jokes to share with her group of friends and has a “conniption” when their reactions don’t match her expectations. These sections seem to serve as additional counterpoints to Millie’s fantasies of a promotion-based end to her suffering. Even the normatively successful can feel alienated and dissatisfied; they just have a little more energy left for self-deception. Or, as Millie muses about “everyone around [her]” early in the novel, they’re simply “too dumb to know they’re not happy inside.”

Butler captures the way a person can feel grateful for—and terrified to lose—a poorly compensated job that is an obvious, miserable, nerve-fraying waste of life. The novel’s loose plot is constructed around this feeling, which makes it tempting to read The New Me as an explicitly political story: The archetypal millennial gets screwed by the system.

This would be a mistake. Millie’s money woes are so abstract, they may as well not exist. She never pauses to make a furious calculation before buying another round of drinks, never wonders if she’ll make rent. She has a college degree, and she’s without debt. Her parents, educated upper-middle-class retirees, chip in for rent and groceries with gentle encouragement and nary a passive-aggressive remark. Temping is a choice, not a last resort; Millie says she’s drawn to the “slight atmospheric changes” of different workplaces. This particular job is indeed precarious, as temping is by nature, but crucially, her life is not.

The Plague of Pointless Work

What Happened to All the Good Jobs?

This is not to deny Millie’s anguish, which seems to be her salient experience of being alive. But unlike many millennials, she can afford to step away from the treadmill desk and reassess her path. Thanks to classes paid for by her parents, she’s amassed a battery of skills: “illustrator, bartending, grant-writing, ceramics.” And while no job is perfect, some are pleasantly challenging or boring in a soothing way or at least have a reason to exist. The reader wonders, “Why is Millie, a woman with options, so attached to this particular cage?”

But seeking pleasure isn’t Millie’s forte. She spends her free time binge-watching a true-crime show and making sporadic half-hearted stabs at self-improvement. There’s no evidence that she likes or admires anyone; the two women she calls friends are the self-absorbed Sarah (“talks too much, almost constantly”) and dull Beth (“always bored the shit out of me”). Calling her supportive mother makes Millie “bored and irritated.” She doesn’t eat for pleasure or health; her diet is all “sour” coffee, “old cheese,” the “stale butt of a baguette.” She seems disgusted by her body and uncommitted to hygiene; her “pits are slick,” and she smells “like an onion pizza.” In her myopia, Chicago exists primarily as an annoying commute.

Does Millie like anything? By her own account, “I try to assess the things that bring me pleasure…and the answer sits in my empty skull: nothing. Nothing, nothing, nothing.”

Millie is surprisingly apolitical for a woman with a spiritually vacant low-wage job, a penchant for rage, hours to burn, and an Internet connection. There’s evidence to suggest some vaguely progressive leanings: She “knows” that it’s wrong to buy bottled water and that “Forensic Files is propaganda for the Justice Department.” But she cannot contextualize her suffering, nor can she conceive of solidarity with other workers. She believes her life should be better, but it’s not a political yearning—instead, she seems to think her pedigree entitles her to a cushier life. By the second chapter, Millie specifies that her parents have graduate degrees and that she was “raised correctly and in a good home.” Later, she recalls mocking an acquaintance to her ex-boyfriend for using the word “utilize.” Excerpted at length for its snobbery:

[It’s] a real first-gen-college-grad kind of word, like your parents are small-town conservative Christians who didn’t have any books in the house, and you’re self-conscious about your upbringing so you want to stand out by using elitist intellectual language, but you don’t actually know any long words, so you just truss up the word ‘use’ for no fucking reason other than to try to make people feel like you’re the one with the big mental dick, even though ‘utilize’ is basically just administrative jargon and completely déclassé to them that knows.

Barbs like this thread the book. Millie is as cynical as a Ferrante narrator without the superhuman perception, as vicious as a Thomas Bernhard character without the rigorous self-awareness. These lines are occasionally funny (“It’s like sucking on a rock and pretending it’s candy, talking to this guy”), but the cumulative effect is tedious. 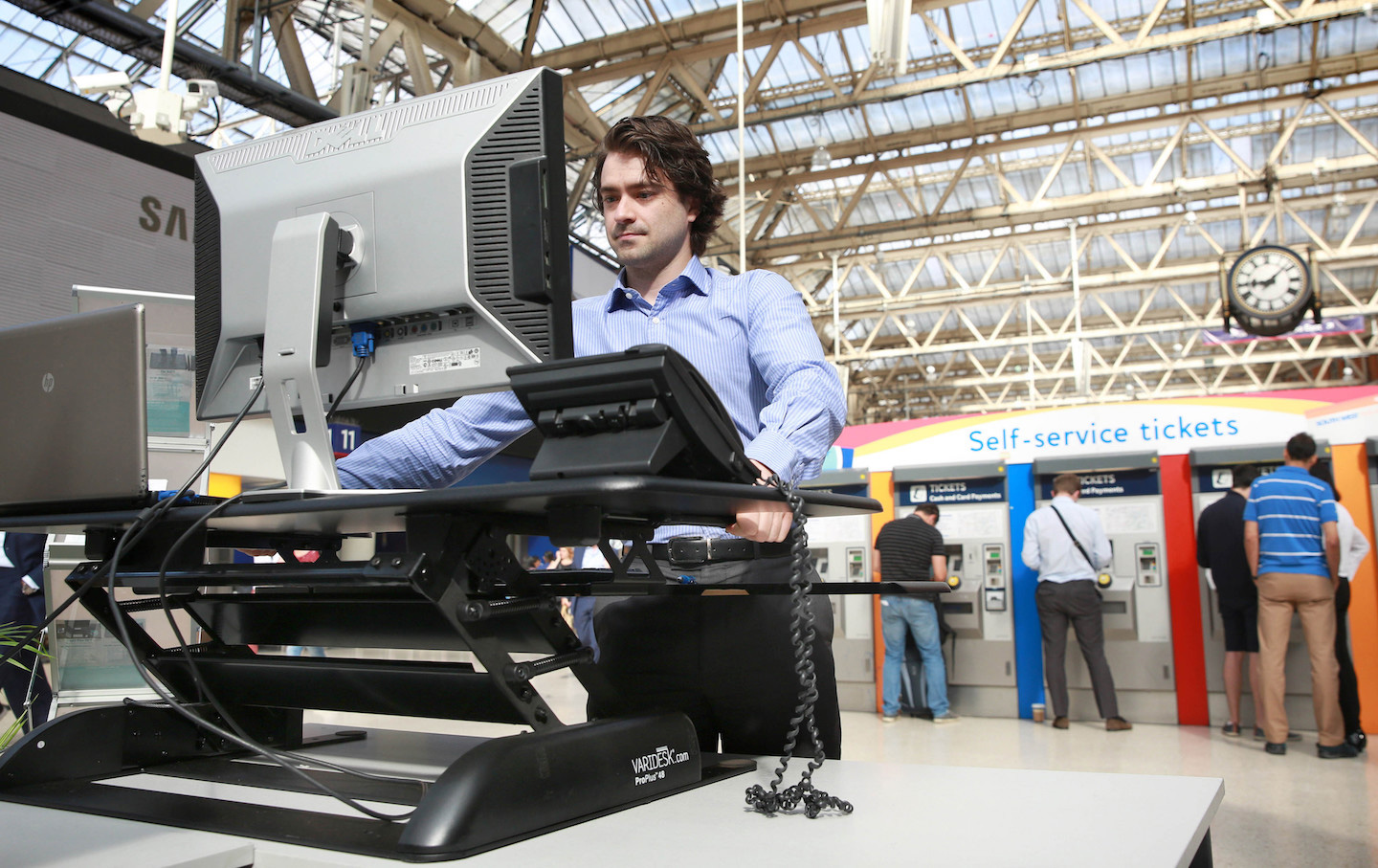 A demonstration of the VARIDESK standing desk at Waterloo Station in London, 2015. (Photo by Matt Alexander / PA Wire / AP)

Without the pathos of real precariousness—she has plenty of escape routes—Millie sometimes reads like the sort of millennial caricature trotted out by Fox News anchors and boomer opinion writers: self-absorbed and entitled, lazy and undirected. There are moments when The New Me almost passes for satire, but the book confirms her point of view a little too often for this to be the case. Her coworkers really are vacuous; her job really is pointless; Karen really is judging her hygiene.

Millie is at home with the protagonists of several recent novels about millennial women—including Made for Love by Alissa Nutting, Severance by Ling Ma, The Answers by Catherine Lacey, and My Year of Rest and Relaxation by Ottessa Moshfegh (which is technically about a Gen Xer but has significant spiritual overlap). All depict young women struggling to find connection and purpose in a society that buries meaning under distraction, consumption, and superficial self-help. And all tell the stories of women who, to varying degrees, can’t set their own course: They take the strange, grim jobs offered to them, accept curdled imitations of love, and possess few dreams of their own. The narrator of My Year of Rest and Relaxation is possibly the most consistently successful among the pack at setting and achieving a goal—but this goal is to drug herself into a yearlong snooze, which isn’t exactly proactive.

Reading these novels in succession, you’d get the sense that millennials are defined not by the downward mobility of their generation but by something internal: a mysterious dearth of will. It’s a curious archetype for so many ambitious young writers to gravitate toward; successful novelists are hardly a listless crowd. Perhaps the appeal lies in the ready-made, almost meme-like relatability of these characters. Who hasn’t wanted to leave work and nap for a few months? Who doesn’t feel like a zombie on Monday mornings?

It feels, in a way, like a shortcut, a way to evoke a sense of generational fatigue without getting into the details and to suggest political heft without mentioning politics. These characters—broke but not poor, emotionally unwell but physically safe—allow middle-class readers to feel like the real victims of capitalism instead of like participants and beneficiaries. Millie isn’t alone in her shrunken field of vision. If you gaze long enough into a Whole Foods bag, the Whole Foods bag will gaze back into you.