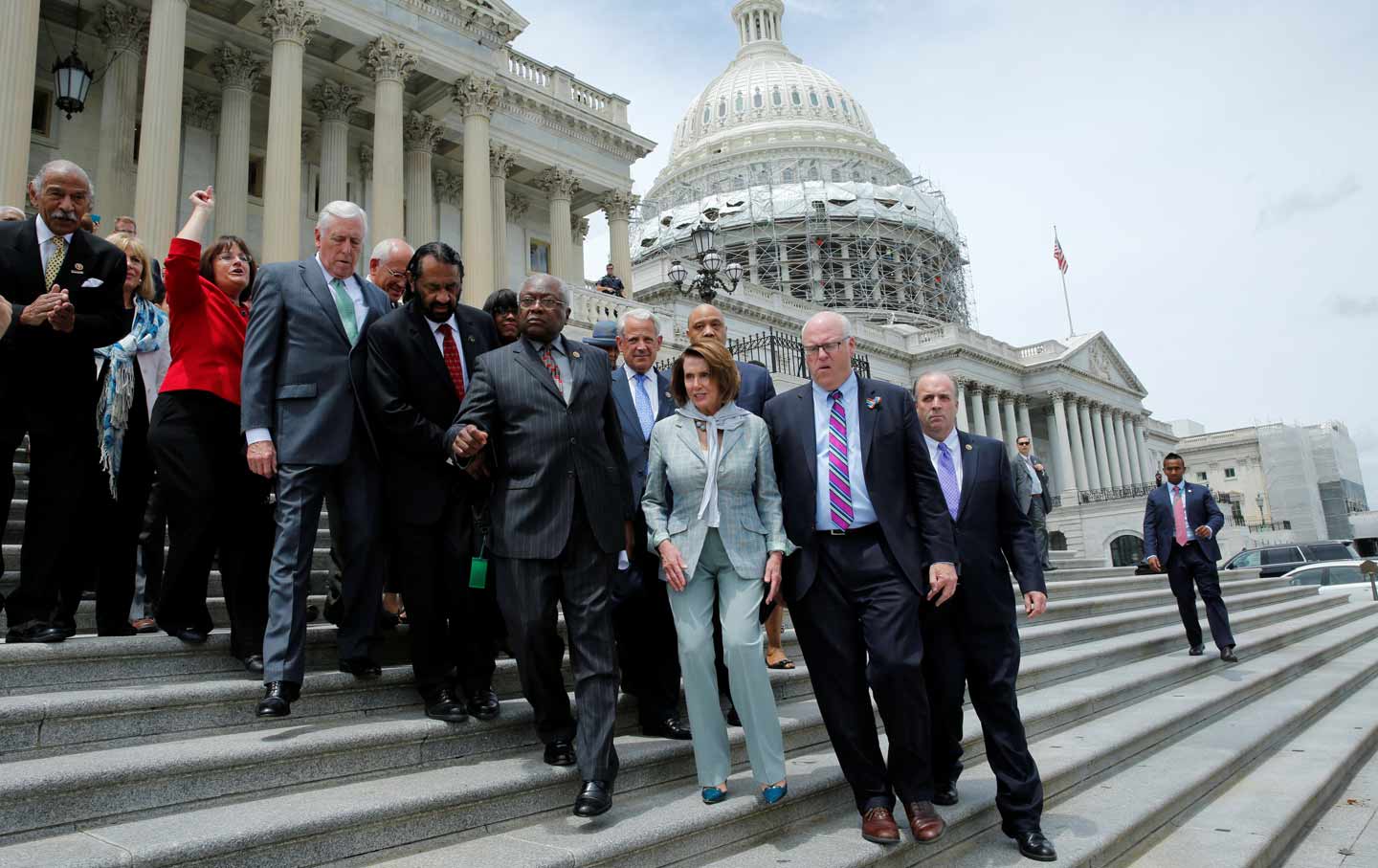 US House Democrats walk out of the Capitol after their sit-in over gun-control law on June 23, 2016. (Reuters / Yuri Gripas)

Every gun death in the United States is soaked through with politics, and only politics can reduce gun violence in this country. For this reason, the recent filibuster in the Senate led by Senator Chris Murphy (D-CT) and the sit-in in the House starring civil-rights lion John Lewis (D-GA) were most welcome. Such a rare display of vigor and defiance by congressional Democrats—which somehow was not provoked by voter disenfranchisement or federal sentencing reform—is almost enough to make one overlook the bill itself, which pegs an assault-rifle ban to terror-suspect watch lists compiled by the FBI. The bill is terrible, and its failure thus far is richly deserved. When Democrats return after their Fourth of July holiday, they should pick a gun-control bill worth supporting.

If the Democrats’ goal was to prevent gun deaths, their bill—based on the faulty terror watch list—wouldn't succeed.

If the Democrats’ goal was to prevent gun deaths, their bill would fail to achieve it. Although framed as a response to the Orlando massacre—itself eagerly interpreted as an act of terrorism, unlike similar shootings at Virginia Tech or Columbine—the bill would have done nothing to prevent that mass shooting, or others like it.

True, the feds had briefly put Omar Mateen on a terrorist watch list, from which he was removed after investigation. The San Bernardino shooters were on no watch list and at any rate acquired two of their guns from a friend and neighbor who was not on a list either. Neither was the gunman who murdered three and wounded nine at the Planned Parenthood clinic in Colorado Springs last November. Nor was Seung-Hui Cho, who murdered 32 people at Virginia Tech in 2007.

The Democrats’ terror list bill would have done nothing to prevent the Orlando, San Bernadino, or Columbine massacres.

Why then peg a gun-control measure to terrorist watch lists? The Democrats seem to think they are using this anti-terrorist framing as the thin end of the wedge that will broaden to meaningful gun control. To oppose their bill is to support terrorists—clever stuff! Yet the most likely consequence of this symbolic bill is not any reduction in gun violence but still more gouging of civil liberties.

The watch lists and their close bureaucratic relatives the no-fly lists have been accurately condemned by the ACLU and the Council on American-Islamic Relations as arbitrary and engaged in religious and ethnic, which is to say racist, profiling. The process is secretive and extremely difficult to challenge and has proven to be subject to political manipulation to antagonize and bully dissenters (civil-libertarian filmmaker and artist Laura Poitras; National Book Award winner William T. Vollmann) or political opponents. Representative John Lewis himself was placed on this no-fly list; how pure an accident that snafu was remains unclear. And although Teddy Kennedy was never precisely placed on the no-fly list himself, he was hassled repeatedly by airport officials because his name was similar to that of someone on the list, which is hardly reassuring. Do today’s suddenly obstreperous Democrats imagine they will always be in charge of the executive branch? Limiting established constitutional rights, even those rights that liberals don’t care for, on the basis of arbitrary watch lists is a habit our government should not be starting now, or ever. If the Democrats somehow can pass this watch-list ban, it will be the civil-liberties equivalent of leaving a loaded gun lying around the house.

The most likely consequence of the bill is not a reduction in gun violence but more gouging of civil liberties.

Even beyond the watch lists, hyping the threat of terrorism, as the bill and its backers lustily do, only stimulates the public appetite for more guns. According to Jennifer Carlson’s ethnography of concealed-carry handgun enthusiasts in Michigan, Citizen-Protectors, it is the belief that only armed citizen vigilance protects one’s local Denny’s or PTA meeting from ISIS attack that drives gun sales. This sense of civic duty is sincere, if nutty, and it powers the positive-feedback loop that makes every gun massacre lead to a gun-sales bonanza.

And as delusional as this macho-vigilante outlook is, it is perfectly in sync with the distorted image of gun violence in the United States as being primarily a matter of random “mass shootings” by terrorists and psychopaths. The overwhelming majority of gun homicides every year are not the work of deranged killers opening fire in a school or movie theater, but rather smaller-scale shootings, usually between young men, often black and Latino and involved in the drug trade. This is a group without much power and influence, but it is their victimization that needs to be addressed and prevented most urgently.

What we need is a blanket ban on assault weapons—or better yet, a ban on high-capacity magazines. A bill banning both was proposed by Representative David Cicilline (D-RI) last December. It does not have the votes today, but then neither does the current bill pegged to the dodgy watch lists. Of course, even if a broad ban miraculously were to pass, we should have no illusions about how easy it is to make such bans effective. After all, the gun industry found ways to circumvent the assault-weapons ban that lasted from 1994 to 2004 by gaming the ammunition-loading mechanism. Enforcing this kind of ban will require political will and budgetary resources; the law will become worthless without frequent updates, given the proven adaptability of gun makers to get around the regulations. All that said, such a blanket ban—unlike the recent proposal pegged to watch lists—remains one of the best entering wedges for more meaningful gun restrictions.

If Democrats pass this watch-list ban, it will be the civil-liberties equivalent of leaving a loaded gun lying around.

Despite the challenges of passing gun control, despair for the short-to-medium term is not warranted. It’s easy to overlook the fact, amid the (lucratively) adrenalized news cycle, that not all national trends are leading to greater gun carnage in this country. Although data are muddy, the percentage of gun-owning households seems to have gone down since the 1960s, and the homicide rate, despite spikes in a few big cities last year, has been in persistent decline since the early 1990s. Gun violence is not a crisis; it is a massive ongoing problem. Reducing gun violence is going to require a generational effort to implement an aggressive but farsighted strategy, not terror hype that only reinforces the politics of fear.