Our climate is changing, and our approaches to politics and activism have to change with it. That’s why The Nation, in partnership with the Food & Environment Reporting Network, has launched “Taking Heat,” a series of dispatches from the front lines of the climate-justice movement, by journalist Audrea Lim.

In “Taking Heat,” Lim explores the ways in which the communities that stand to lose the most from climate change are also becoming leaders in the climate resistance. From the farms of Puerto Rico to the tar sands of Canada, from the streets of Los Angeles to Kentucky’s coal country, communities are coming together to fight for a just transition to a greener and more equitable economy. At a time when extreme-weather events and climate-policy impasse are increasingly dominating environmental news, “Taking Heat” focuses on the intersection of climate change with other social and political issues, showcasing the ingenious and inventive ways in which people are already reworking our economy and society. There will be new dispatches every few weeks (follow along here).

Adan Anguiano had been working in the solar industry only a few months when his company, Evolution Energy, got a contract to install a solar-heating unit two blocks from his home, in the Boyle Heights neighborhood of East Los Angeles. “I was working on the roof and looking straight at the view of where I grew up, and it was like, wow,” he recalled. Candles were flickering in the distance, and he recognized them as part of a sidewalk memorial for his friend Fred Barragan, who had been shot by police in March 2017, just weeks after Anguiano joined Evolution.

Just a few years earlier, Anguiano would never have imagined himself with this job, or any job. The 33-year-old had begun “making mistakes, getting into trouble” in high school, leading to a two-year stint in a juvenile-detention facility when he was 16, and then a couple of short prison terms in his twenties. “I didn’t have anything,” he said. He was no longer living with his ex and his kids, so he sought distraction by drinking and hanging out in the streets. “I fell back in the same old ways.” 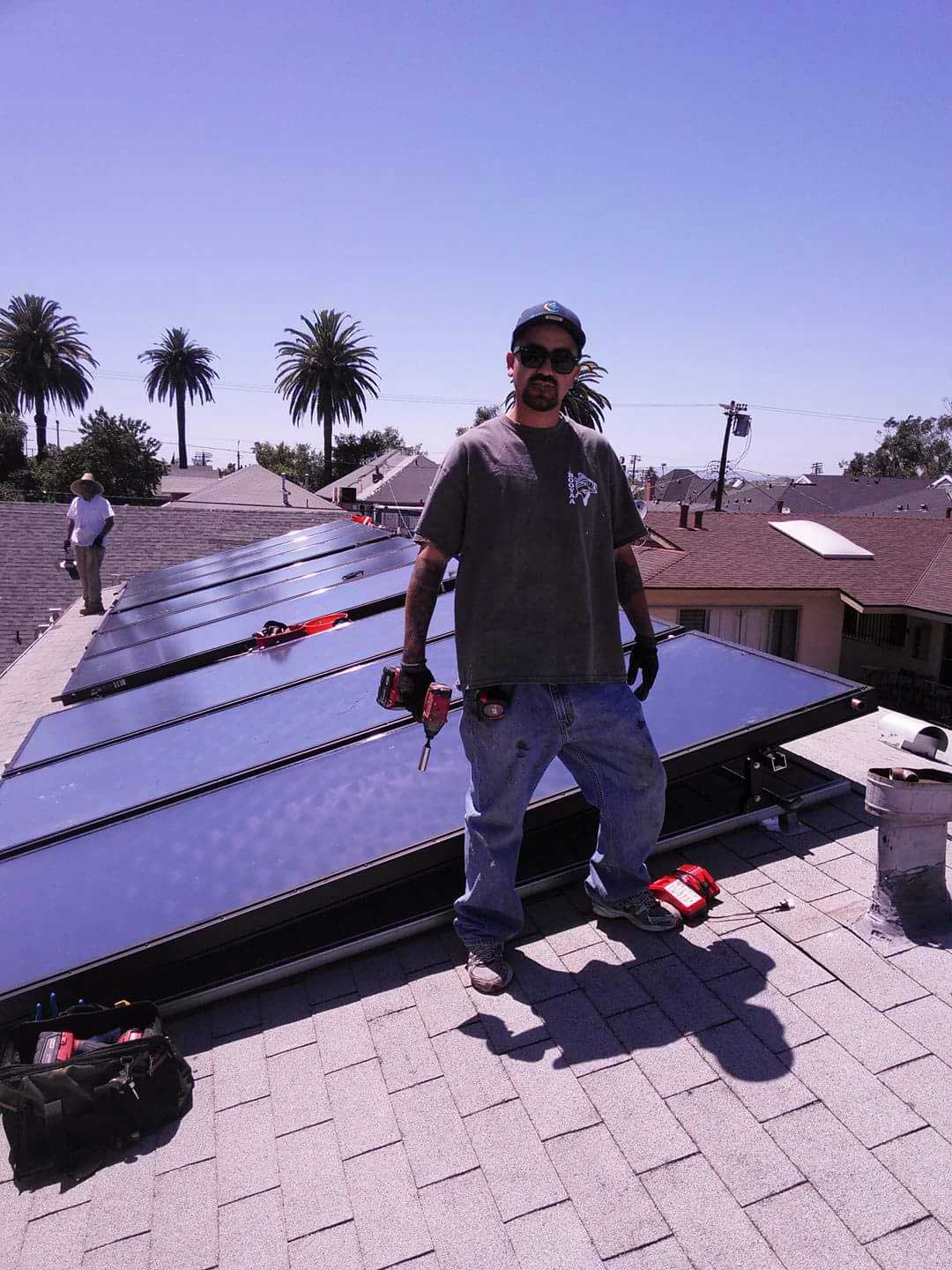 Then a friend, David Andrade, suggested he check out the solar-installation program at Homeboy Industries, an organization that Father Greg Boyle and other community members started in Boyle Heights in 1988 to support and train people who had been incarcerated and involved with gangs. Anguiano had known Father Greg since he was 7; Boyle’s Dolores Mission parish was a short distance from the Aliso Village housing project where he grew up. Anguiano remembered Father Greg giving tennis shoes and money to people in the community. Now, he told Father Greg, he wanted to turn his life around. Father Greg handed him a slip of paper that read, “March 6, 2015.” It was his start date at Homeboy Industries.

Since 2010, Homeboy Industries has been offering tuition, tutoring, and financial support for “homies” to learn about solar-panel design, construction, and installation through the Photovoltaic Training program at the East Los Angeles Skills Center. Anguiano discovered through the four-month course that he loved the work, and was good at it, despite never completing high school. “It was a lot of math,” he said. “And math really spoke to me.”

But it was the hands-on rooftop experience he gained through GRID Alternatives, Homeboy’s partner in the program, that made him realize this was part of “something big.” GRID, a nonprofit organization, provides solar panels for free to low-income families in communities designated “red zone” by the California Environmental Protection Agency. These are poor neighborhoods that are plagued by environmental, air- and water-quality problems. According to GRID, the solar panels typically cut energy costs for homeowners by at least 50 percent, and often by as much as 80 or 90 percent. They also help to ensure that these communities are not left behind in the renewable-energy transition; installing rooftop solar panels can cost several thousand dollars.

But the panels are not really free. They are funded through state legislation that sets aside 35 percent of the proceeds from California’s cap-and-trade fund for green investment in red-zone communities. Since 2014, $1 billion has been delivered through this program. As the first statewide program in the country to redistribute money from the worst polluters to the most underrepresented and environmentally damaged communities, it also is something of a blueprint for the rest of the nation.

Red-zone communities include inner-city Los Angeles neighborhoods marred by active oil pumpjacks, as well as the predominantly Latino Boyle Heights, which is bisected by six freeways and exhibits a rate of childhood hospitalization higher than the statewide average, due to asthma. Through GRID, Anguiano clocked more than a hundred hours of volunteer experience installing panels for low-income families and homeowners in neighborhoods like his. “I felt good that we were helping them out,” he said.

It helped him out, too. In March 2017, he got his first job as a solar installer, making $15 an hour. After a little more than a year, he was promoted to crew leader and his hourly wage rose to $23. This is more money than he has ever made, and he still sees room to grow in his new career.

Anguiano wasn’t sure he was qualified to manage a team of four, but he surprised himself. “I’m teaching my crew, and everyone’s happy, working,” he said. His cousin, newly released from federal prison, recently joined his crew, and Anguiano has been training him. He’s proud of the work he does. “Sometimes we drive through apartment complexes,” he says, “and I tell my cousin, ‘I did this one right here.’”

As a renewable-energy worker, Anguiano is in an industry that employs 3.4 million people globally. According to the 2017 National Solar Jobs Census, employment in the solar sector in the United States has grown 168 percent since 2010, to more than 250,000 jobs across all 50 states. (Nationwide, 806,000 people are employed in the renewable-energy sector overall, and only 51,000 in coal mining.)

Most solar jobs in America—78 percent—are on the demand side, including sales and solar installation, not in manufacturing. And employers can hardly keep up with the demand: 18 percent reported having trouble finding qualified and experienced candidates to fill open positions. “Working in the solar program is a career opportunity,” said David Andrade, the friend who urged Anguiano to check out Homeboy, “not just job training.”

Andrade also sought out Homeboy after spending nearly a decade in prison. He got counseling, support, had his gang tattoos removed, and graduated from the solar-installation program in 2014. Today, he is the volunteer-and-training coordinator at GRID Alternatives, where he speaks proudly of the first Homeboy cohort he ushered through the program: All 19 were undergoing reentry after time in prison, and all 19 found jobs after graduation in the solar industry. 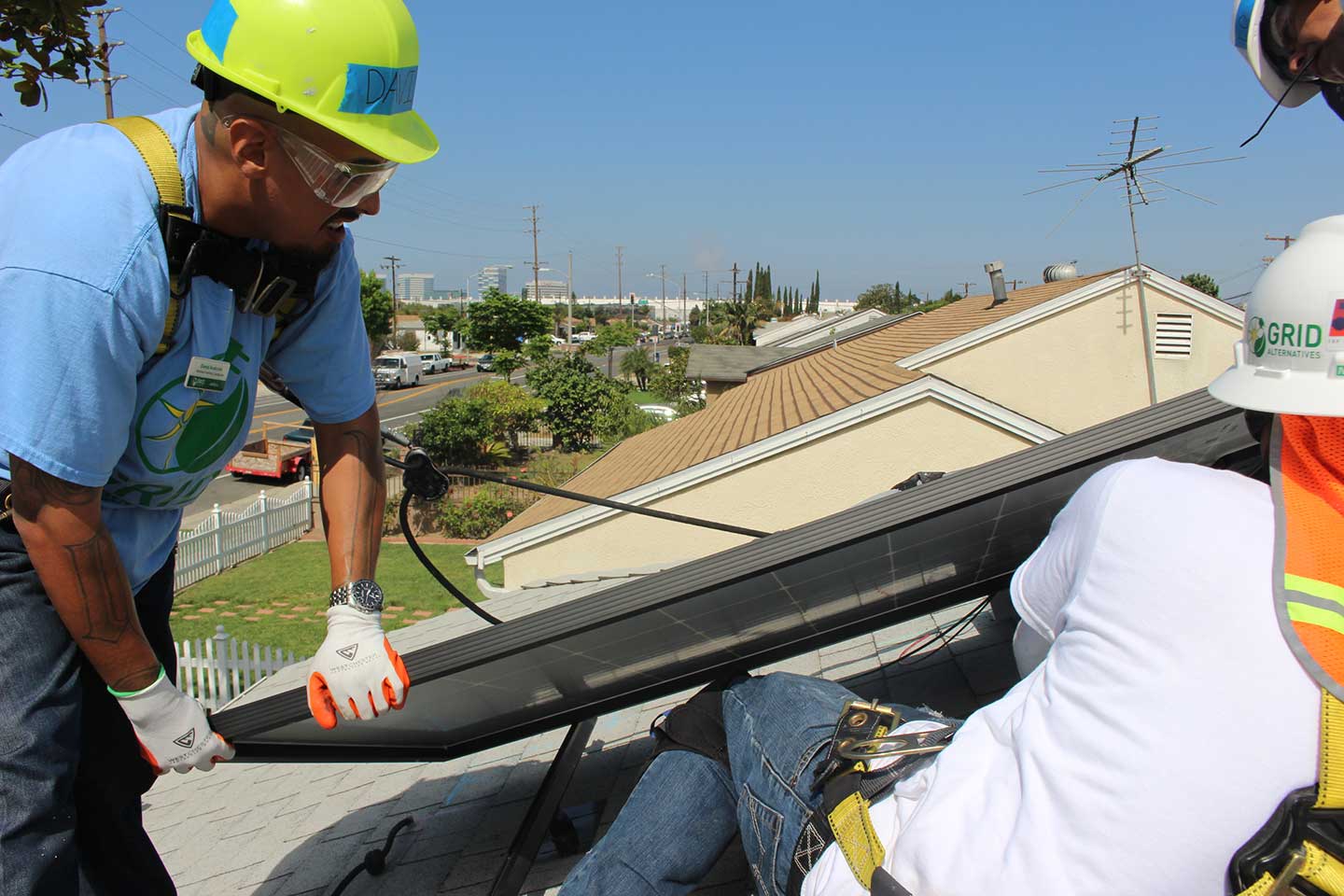 Andrade attributes the program’s success to the fact that it leads to meaningful work, in an industry that is expanding. Entry-level positions pay a living wage, and there is ample room for career and income growth.

California is at the center of the US solar industry, with 40 percent of the country’s solar capacity and some 100,000 solar-industry jobs (over 16,000 in Los Angeles County alone). Homeboy is part of RePower LA, a coalition of environmentalist, faith-based, community, and labor groups that works to generate good renewable-energy jobs and shift the city’s energy infrastructure away from fossil fuels.

These jobs are a crucial component of California’s move from a carbon-based economy to one that is carbon neutral. And as the Trump administration rolls back what small gains had previously been made on federal climate policy, state-level policies to cut emissions and stimulate the renewable-energy industry will also be a crucial component of the nationwide energy transition. But so far, Hawaii is the only state to commit to 100 percent renewable energy, which it is mandated to reach by 2045 (California is currently considering a similar legislative mandate).

Whether California is doing enough to address the climate crisis, or even the ongoing pollution in red-zone communities, is a matter of debate: With Los Angeles being the most traffic-clogged city in the world, electricity production and automobiles are still responsible for the lion’s share of emissions in the state. 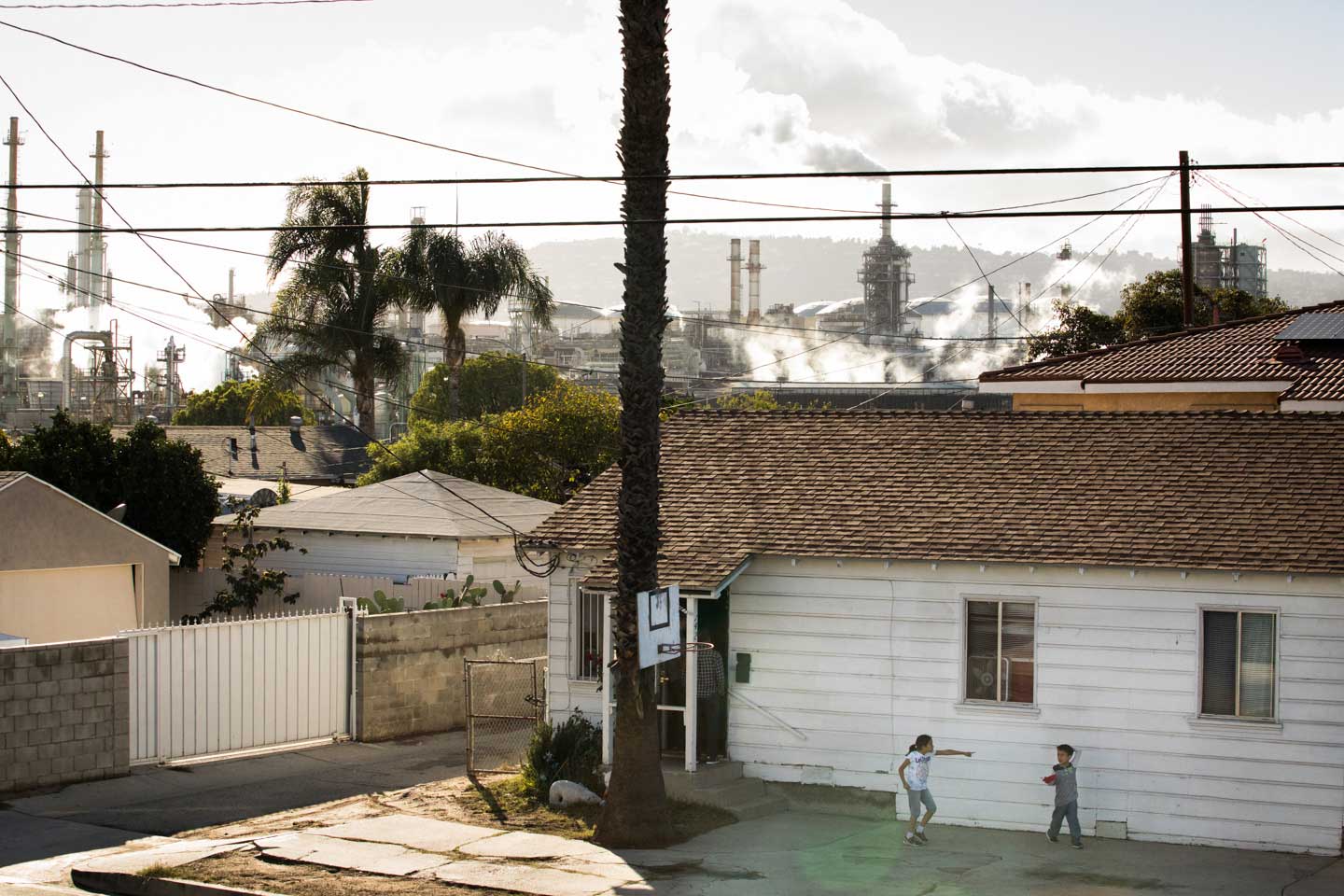 Children play in the Wilmington neighborhood of Los Angeles, just next to the Phillips 66 refinery. (Elizabeth Fladung)

Amy Vanderwarker, of the California Environmental Justice Alliance (a RePower member), has doubts that the cap-and-trade program, which funds the solar panels GRID provides, can cut California’s carbon emissions to its 2030 target: 40 percent below 1990 levels. Regardless, it does nothing to dismantle the network of refineries, factories, interchanges, and industrial facilities that are polluting neighborhoods like Boyle Heights in the first place. (Cap-and-trade schemes impose penalties on companies when they exceed a limit on emissions, meaning that the market dictates whether it is cost-effective for companies to pollute. Stronger emissions regulations, by contrast, can make polluting illegal.)

This kind of large-scale public investment in red-zone communities could also have unintended effects. “The danger that this could exacerbate existing displacement and gentrification is huge,” said Vanderwarker. Green space, modern infrastructure and good air and water quality make neighborhoods more attractive to homebuyers and the real-estate industry. 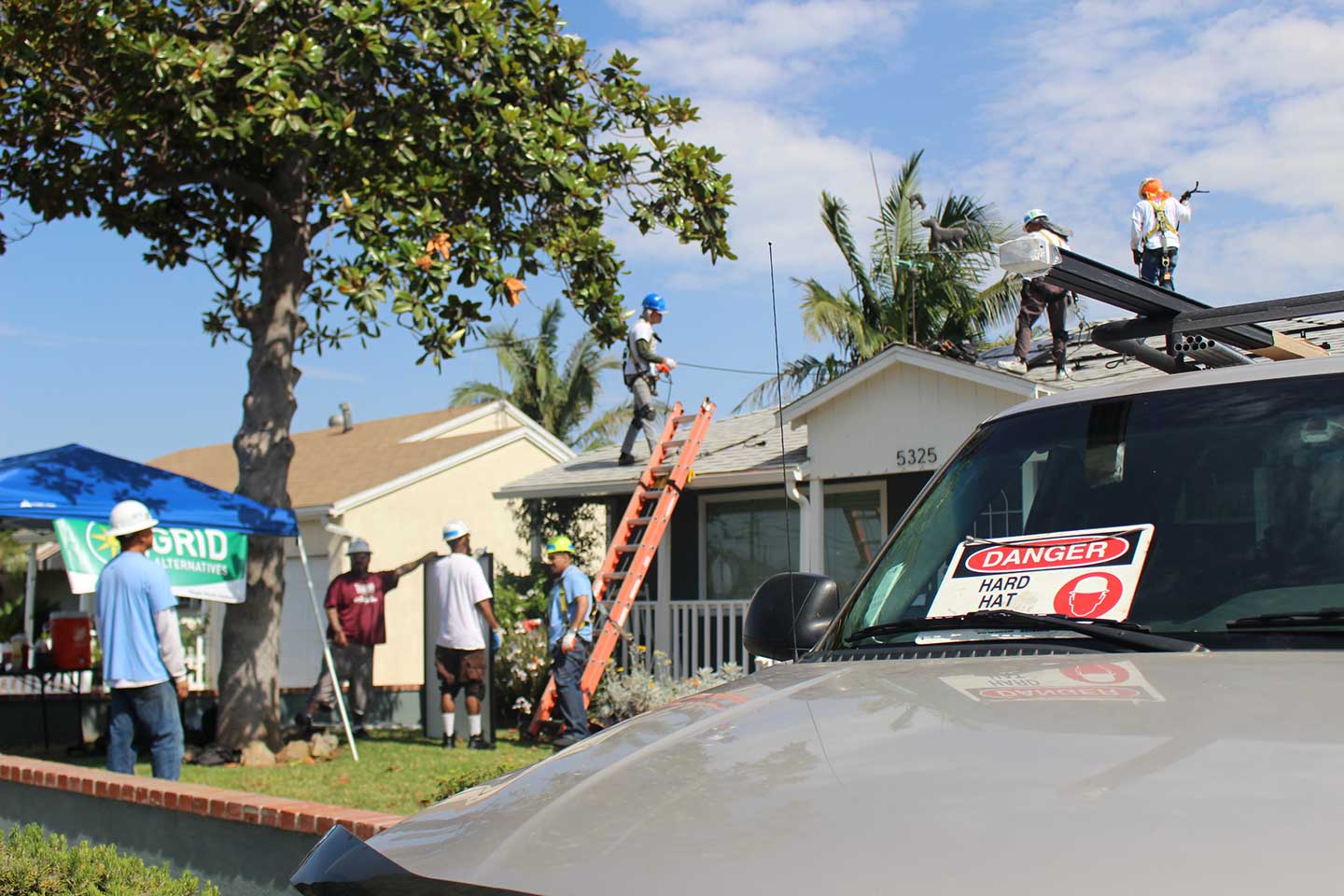 This is an issue for Boyle Heights, where skyrocketing rents already are sparking clashes over gentrification, as well as throughout Los Angeles, which is in the middle of a homelessness and affordable-housing crisis. David Andrade’s neighborhood, City Terrace, which borders Boyle Heights, has not been spared, either. He is lucky to live in the same house where he lived before he was incarcerated, but the rent has nearly doubled in that time.

Without his work with Homeboy, he says, “I’d be in trouble.”

Can Farming Save Puerto Rico’s Future?

If only more employers were willing to judge workers on their performance rather than their criminal record or appearance, Andrade says. “The reentry population is an untapped pool of talent of individuals who are trying to change their life.”

But the changes to Boyle Heights don’t bother Adan Anguiano as much. He still remembers, maybe too vividly, when four separate gangs populated the different corners of the Aliso Village project, and he takes comfort in not having to look over his shoulder when he walks outside. Anguiano is on track to achieve his dream: owning a house and a little boat, and, above all, being self-sufficient. “I like doing things that don’t have to do with being tied into the grid,” he explained. “But getting power from the sun? That’s something, like wow.”