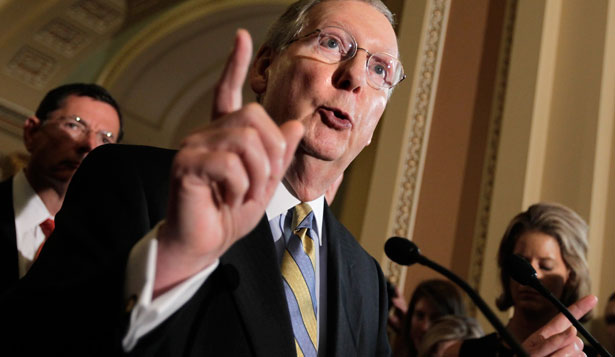 Cue the howls of outrage. On Monday the Environmental Protection Agency issued a draft rule to cut carbon emissions from existing power plants by 30 percent below 2005 levels by 2030, a move likely to be the Obama administration’s most significant in the fight against climate change. Immediately, Senate minority leader Mitch McConnell called the proposal “a dagger in the heart of the American middle class, and to representative Democracy itself.” Not to be outdone, the Heartland Institute warned that “by the time EPA is finished, millions of Americans will be freezing in the dark.”

There is nothing new about the right wing’s apoplectic response. Nor in the talking points from business groups like the Chamber of Commerce, which attacked the standards pre-emptively with a report intended to indicate that the agency’s move would spell economic calamity. (Never mind that the Chamber’s analysis actually found that the costs would be quite small.) Conservative politicians and organizations that represent polluters have attacked the proposal as job-killing, cost-ballooning executive overreach, although in fact the EPA has a legal duty to regulate carbon emissions. And coal interests (and some coal-state Democrats) say it will kill the industry, which has slid into financial distress as reserves dwindle and become costly to mine.

If the power plant rules were indeed likely to leave the nation in the dark, one might expect the companies that supply the country’s power to be similarly alarmed. In fact, the apocalyptic rhetoric in Washington doesn’t reflect the way the rules have been received by stakeholders outside the Beltway. It’s not surprising that renewable energy and natural gas companies welcomed them. But even some of the utility companies that operate the country’s dirtiest power plants responded with what looks more like a collective shrug than mass panic. Many companies are pleased with the flexibility in the proposal, and the fact that it sets 2005 as the baseline year from which reductions will be measured. That year was the high point for US emissions, so reductions from that baseline will achieve less than if the reduction were based on current levels.

“It’s really too early for us to comment specifically on how it will affect rates to our members, but because of the baseline year and the timeline for compliance we think that there’s going to be a lot of opportunity for us to be creative in managing costs,” said Eric Olson, the vice president and general counsel of Great River Energy, a nonprofit electrical cooperative that serves about 1.7 million people in Minnesota and Wisconsin.

According to the clean energy group Ceres, Great River produces the second-highest concentration of carbon dioxide per megawatt-hour of electricity of any utility in the country. The cooperative relies on coal for 94 percent of the electricity it generates. That makes the company particularly vulnerable to the EPA’s new regulations, but Olson didn’t sound fazed.

“We’ve been preparing for this rule,” he said, noting that Great River’s priorities are maintaining reliability and affordability. “The partisan debate in response to the rule is going to go on. The legal debate is going to go on. We have a utility to run and we are focused on that.”

The response from bigger utility corporations has been modest, too. “Our initial reaction is that we don’t have too far to go,” to meet the new standards, Ray Evans of FirstEnergy Corporation told the Cleveland Plain Dealer. The Akron-based utility—one of the largest in the nation—relies on coal for more than half of its power.

“There’s a couple of things we’ve been pushing real hard on that we do see in the rule,” said Dale Niezwaag, senior legislative representative for Basin Electric, another coal-dependent cooperative that produces high concentrations of carbon pollution. Still, he expressed reservations about whether the standards would create higher costs for consumers. Asked what kind of plan for limiting carbon emissions would be more palatable, he said, “I can’t come up with anything. Doing energy policy by regulation we don’t agree with.”

This is an important point: there’s nothing the Obama administration could do, short of not regulating carbon emissions at all, that could earn the blessing of the coal industry and conservative groups. Nancy Gravatt, a spokesperson for the National Mining Association, confirmed as much. “We would maintain that the best way to achieve reduction is through investment in research and technology,” she said. “We’re not looking for more regulations.”

No business is ever looking for more regulations. Incidentally, the NMA, along with congressional Republicans, recently fought rules designed to protect mine workers from black lung disease by limiting their exposure to toxic coal dust—an important footnote to the claim that by attacking the EPA, Big Coal and the GOP are fighting for the little guy.

The calls for “a more balanced approach” coming from the EPA’s critics are intellectually dishonest. An electrical grid that relies heavily on coal is simply not compatible with a low-carbon future. Coal will necessarily be a loser under any policy that does something meaningful to limit climate change. The unhappy correlate is that communities dependent on the coal industry will face some upheaval—but more so if their elected officials spend their time railing against the EPA rather than by helping their constituents through the transition.

“We understand that we’re going to have to operate within a carbon-regulated world,” Basin Electric’s Neizwaag said. It turns out that a huge and bipartisan majority of Americans welcomes that reality, though is has yet to penetrate the skin of the GOP.