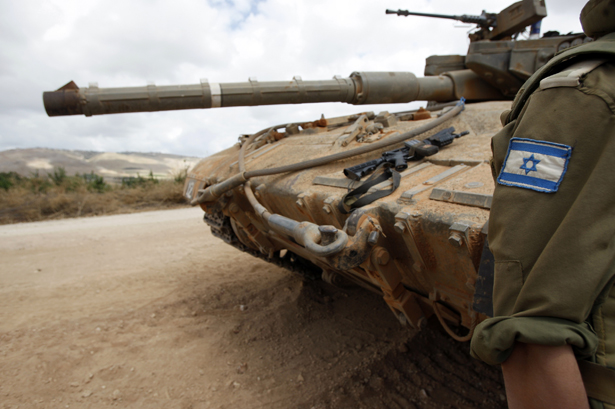 One day most politically aware Americans and Europeans will greet a book like Max Blumenthal’s Goliath: Life and Loathing in Greater Israel with a yawn. Israel will be universally seen as a serial violator of international law and the only discussion will be about how to make it respect that law.

That day may be closer than it appears: one of many indications is US Secretary of State John Kerry’s hyper-intensive drive for a peace deal, which he has warned may be one of Israel’s last chances to stave off “increasing isolation.”

But we are not there yet, and this is why Goliath is such an important book. Whereas others have pierced the myth of Israel as a besieged beacon of democracy, Blumenthal punches a hole through it. He does so by juxtaposing harrowing accounts of Israel’s brutal dispossession of the Palestinians in 1948—known as the Nakba (catastrophe) when over 700,000 Palestinians were expelled or fled their homes and never allowed to return—with the no less harrowing accounts of Israel’s ongoing dispossession of Palestinians on both sides of the Green Line. The result is a portrait of a society hurtling headfirst toward ultra-nationalism, relinquishing any claims to democracy it may have had as it seeks to pummel a subject population into submission.

Two main themes dominate the book: the impact of the extreme right-wing nationalists’ consolidation of power since the collapse of the peace process in 2000; and the way in which today’s Israel is the logical evolution of the Zionist enterprise from its inception in the late nineteenth century.

From the start, Blumenthal sets the stage to illustrate his first main theme—the right’s victories in the Knesset, among other key state institutions—by vividly describing how Israel’s horrific 2008–09 Operation Cast Lead against Gaza was tied into Israel’s February 2009 national elections. The first pages also kick off Blumenthal’s fast-paced journalistic style, which makes one relive the terror and mindless destruction of the assault on Gaza.

For many in the United States, and perhaps particularly for American Jews, Gaza was a wake-up call similar to the one in Europe during the 1982 invasion of Lebanon and siege of Beirut orchestrated by the late Ariel Sharon. Appalled at the savagery of that attack, many Europeans said, “But this is not the Israel we know” and began to mobilize against its human rights violations. (For Palestinians, of course, this was the Israel they had always known.)

However, as Blumenthal deftly illustrates, the assault had the opposite effect within Israel. There, it united a fractured Jewish public—what Blumenthal calls “a deeply traumatized, heavily indoctrinated society”—and solidified the “authoritarian trend” that had been building for years.

Not surprisingly, Cast Lead’s primary beneficiary was Benjamin Netanyahu, whose “knack for leveraging the fear and trauma of the Jewish public into votes” earned him the nickname “Scaremonger-in-Chief,” Blumenthal writes. Others reaped rewards as well. Avigdor Lieberman, the proto-fascist Soviet émigré who leads the nationalist Yisrael Beiteinu party, zoomed into third place. (In fact, Lieberman and his party had been chalking up two additional Knesset seats for several election cycles thanks to their campaigns against the Palestinian citizens of Israel—the 150,000 Palestinians who were able to stay on their own land after the Nakba and who, at some 1.2 million, now account for nearly 21 percent of the citizens of Israel—but with Cast Lead as backdrop, they strengthened their place in the government.)

Blumenthal places Lieberman within a spectrum of right-wing characters who have been building power in all corners of Israeli political life. Lieberman’s closest friend, David Rotem, is just one example. He lives in the illegal settlement of Efrat, and has been responsible for “many of the most egregiously discriminatory, anti-democratic bills” introduced in the Knesset. Indeed, Rotem used his position to fast-forward a bill enabling the first appointment to the Supreme Court of an illegal settler, Judge Noam Sohlberg, a man distinguished for facilitating the transfer of Jerusalemite Palestinians in recent years. Citing these and other examples, Blumenthal shows how the Supreme Court, one of the few institutions still imposing a mild check on Israel’s colonization project, is now in the right wing’s sights.

Yet are people like Rotem or Sohlberg so far outside Israel’s mainstream? The answer to this question constitutes Goliath’s second main theme: that there is a direct line between the Zionist ideology of the late 1800s and the racist state of today.

How different is today’s extreme right wing from David Ben Gurion, revered as the founder of Israel, when he said in 1936 of the then-Palestinian town of Jaffa, “The destruction of Jaffa, the city, and the port will happen, and it will be for the best”? The fate of Jaffa in 1948 is one of the many Palestinian dispossessions Blumenthal describes in heartbreaking detail.

And how different are Rotem and Sohlberg from Labor’s Ehud Barak when he declared in 1996 that without Efrat and other settlements, “There is no meaning to our identity and everything that we are here for”?

Today, as Blumenthal shows, the extreme right has no compunction about publicly stating that its aim is a Jewish state that is Palestinian-lite if not altogether Palestinian-free. That was also the aim of the original founders, although they packaged it in a liberal terminology more palatable to the West. Indeed, former Knesset speaker Reuven Rivlin accuses the liberal Israeli Zionist intellectuals who want to boycott a cultural center in the illegal settlement of Ariel of lacking “intellectual honesty” for just this reason. “Those who expelled Arabs from En-Karem, from Jaffa, and from Katamon [in 1948] lost the moral right to boycott Ariel,” Rivlin tells a Maariv reporter.

By constantly juxtaposing past and present to hammer home these two themes—Israel is in the grip of a right wing that is following the path set by the original Zionists—Blumenthal shows how for the Palestinians the past has always been the present. In one particularly vivid example, he depicts the demolition of the Old City of Jerusalem’s Moroccan Quarter by Israeli forces in 1967 and then fast-forwards to Jerusalem Day 2011 to portray hundreds of young men and women parading through the neighborhood of Sheikh Jarrah—now being cleansed of its Palestinian families—shouting “May your village burn!” and “Death to leftists!”

In the face of such moral bleakness, Blumenthal does offer moments of hope, most notably in the stories of everyday Palestinian and Jewish heroes and heroines who populate the book. They are the Davids to the right’s Goliath: the resilient villagers of Ayn Hawd as well as the Negev Bedouin, who have resisted displacement within Israel for more than sixty years; the Tamimi family of Nabi Saleh and the Burnats and Abu Rahmes of Bil’in, who have resisted displacement in the West Bank in more recent years; and many others in the Israeli-occupied territories. These stories are not unknown, but they gain in their retelling as inspirational reminders of the kind of Palestinian steadfastness Israel is trying hard to break. As Bassem Tamimi explains: “Our destiny is to resist. They give us no other choice.”

The stories of Jewish human rights activists are among the most interesting, as is the way they deal with their exclusion from Israeli society. During his four years of research Blumenthal lived and worked with many of these activists and they helped him navigate the world of the extremists. Over the course of Goliath, the attacks against the activists become more ferocious. When right-wing demonstrators against African migrants spot Blumenthal’s journalist colleague David Sheen, they shout, “You should get raped by an African!” Then they spit on or slap him. Israel is now a terrifying place to live not just for Palestinians.

These demonstrators are products of the cradle-to-grave indoctrination that Israeli Jews undergo so that they can manage the colonization project, a process Blumenthal describes in meticulous detail and with illustrative interviews. It is hard not to feel sad at the terrible waste of human potential.

One reviewer said Blumenthal is “not credible, even though the facts are on his side, because the book drips with hatred of Israel.” (He nevertheless recommended the book.) But really, what’s to like? If Blumenthal hates anything, it is the abuses he documents during his four years in Israel. Blumenthal recalls Yeshayahu Leibowitz’s prophecy: “if the status quo remained, ‘the growing savagery of Israeli society will be as inevitable as the severance of the state from the Jews of the world.’ ”

The assumption in this and other reviews is that liberal Zionists are Goliath’s most important audience because only they have the power to influence both Israeli politics and the United States’ support of such politics. Yet this is not so; there are other key actors who can stop this terrifying juggernaut, and for them Goliath is an important touchstone.

One such group is progressive American Jews, which includes the members of Jewish Voice for Peace and the questioning students giving Hillel a hard time; they need to know what they’re up against and how to strategize against it. Another is the political and business class in the European Union, already nervous about the illegality of Israel’s 1967 occupation, and slowly turning to boycotts and divestment. Equally important are the Palestinians on both sides of the Green Line and in exile who will gain understanding of their Jewish allies and the role they can and should play in the Palestinian struggle for rights. As for those claiming leadership of the Palestinian people, they would do well to recognize that today’s Israel never can, or will, make real peace.

For these groups, the book is an invaluable primer. And fortunately, it is already available on Kindle and can be more easily ordered in all parts of the world.

Despite its fast pace, evocative descriptions and keen sense of absurdity, Goliath is not an easy book to read. It is long, and its depiction of the brutality rampant in Palestine and Israel is relentless. And yet, it is important.

A side note: The Nation has attracted some controversy over a perceived lack of Palestinian voices on its pages. It is worth mentioning that I was invited to write this review before this arose, because, as the commissioning editor put it, “the book has stirred up lots of attention,” but lost in the controversy is the “very real situation on the ground in Israel/Palestine.”

Goliath’s depiction of this “very real situation” provides a prism through which both the well-informed and the uninitiated can grasp the elaborate and far-reaching architecture of one of today’s most brutal apartheid regimes. And that is its most valuable contribution.