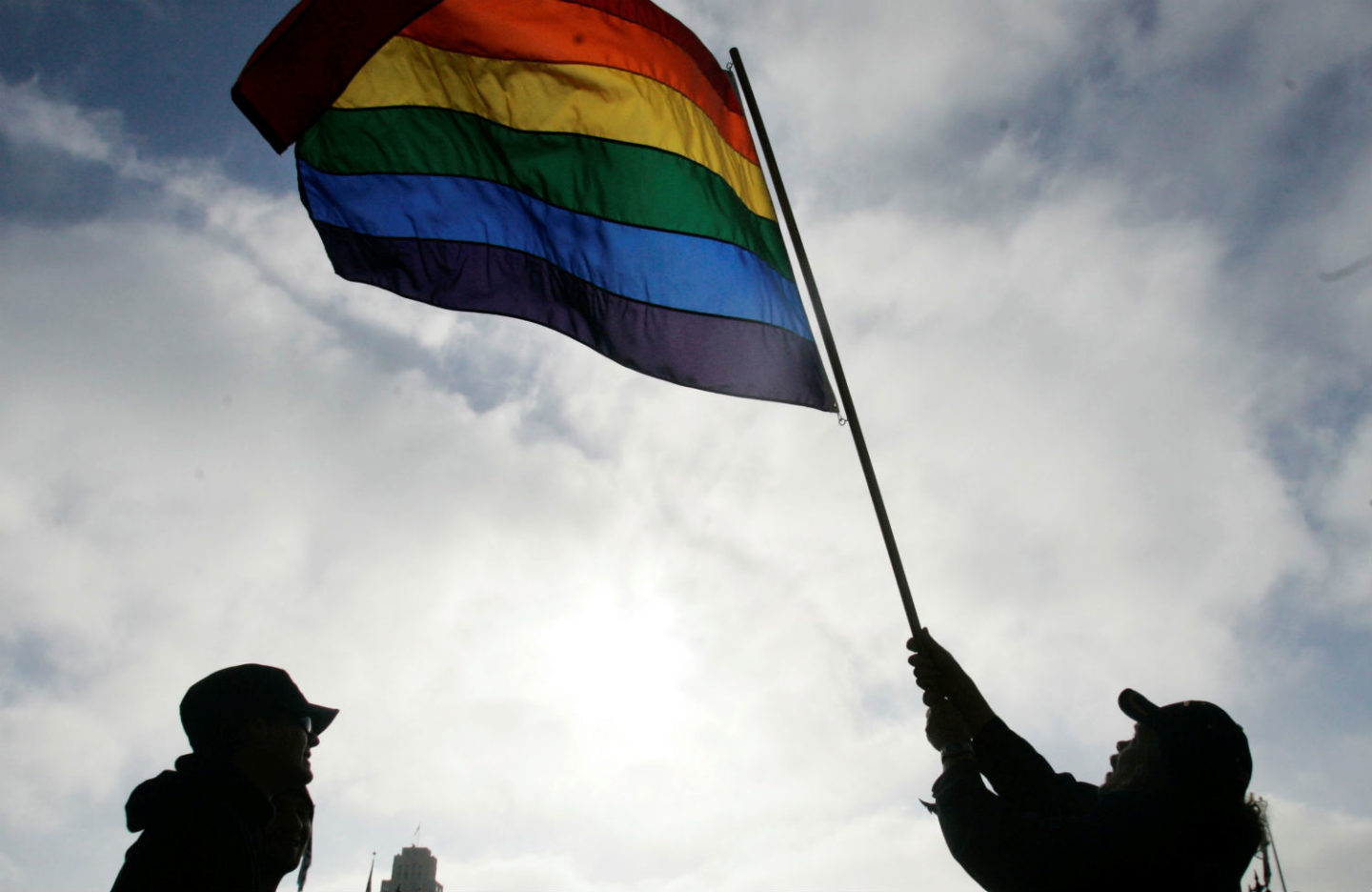 Shari Roll was clutching the marriage certificate. Renee Currie was clutching Shari Roll. And when their designated officiant, Mike Quieto, pronounced them married, they smiled so perfectly, so naturally, that it seemed as if this was just another wedding on the courthouse steps.

The only distinction was that this was the first legally recognized marriage of two women in Wisconsin, the first same-sex marriage in Madison, the one of the initial celebrations of the marriage equality ruling issued by a federal judge Friday afternoon. By the end of the weekend in Madison, 137 same-sex couples had been issued marriage licenses by Dane County Clerk Scott McDonell, while 146 licenses were issued by Milwaukee County Joe Czarnezki.

Together for years and very much in love, Roll and Currie could easily have driven to the neighboring state of Iowa, which has since 2009 recognized marriage equality. Thousands of Wisconsin couples, including Congressman Mark Pocan, D-Madison, and his husband, Phil Frank, married outside the state after a ban on same-sex marriages was enacted in 2006. But Roll and Currie decided to wait for a future when the state could no longer restrict the most basic rights of loving couples.

“We wanted to get married where we live,” explained Shari Roll.

I understand that. There are a great many Americans who choose to marry in the place where we live, embraced by the people we know, grounded in the values and the unique interactions of the very different communities and states that make up these United States.

My hometown of Madison’s uniqueness was evident Friday night, as dozens of couples got their licenses and married on the steps of the downtown building that serves both as the Madison City Hall and the Dane County Courthouse. Judges in robes waited on the steps, meeting couples and performing the marriages as cheers went up from the ever-expanding crowd of well-wishers. Children showed up, brimming with bouquets. I asked who the wedding flowers were for and they replied, “For everyone who is getting married today.” Then they starting handing flowers out to couples who had rushed to the courthouse without much preparation but suddenly felt very special and very loved.

Then the cops arrived with the wedding cakes. Several Madison Police officers who had been observing the festivities raced off to a nearby grocery store and bought three large cakes. Everyone was eating and cheering as the Klezmer band marched up and a fiddler played “Let Me Call You Sweetheart” for a pair of women who waited thirty years to marry.

Marriage equality is not a new premise. The barriers are falling rapidly. Since the US Supreme Court struck down the federal Defense of Marriage Act’s definition of marriage as only between a man and a woman, it has, in fact, become inevitable. Following on the Supreme Court ruling of last summer, the group Freedom to Marry says twenty consecutive rulings by state and federal judges have found state marriage bans unconstitutional—and more will do so.

Yet each state’s embrace of freedom and fairness matters. That was so very obvious on Friday night in Madison, a city that has for decades embraced and celebrated LGBT rights. Indeed, among the many jurists performing marriages Friday night was Dane County Judge Shelley Gaylord, who was first elected two decades ago to a municipal judgeship as an LGBT activist and lawyer.

Wisconsin should have been the first state in the nation to embrace marriage equality.

Wisconsin’s Constitution begins with a Declaration of Rights that proclaims: “All people are born equally free and independent, and have certain inherent rights; among these are life, liberty and the pursuit of happiness.” And Wisconsinites have led the nation in opposing discrimination against people of color, against women and against LGBT people.

In 1982, Wisconsin was the first state in the United States to ban discrimination based on sexual orientation in employment, housing, education, credit and all public accommodations. That measure passed the state legislature with support from Democrats and Republicans and it was signed by a Republican governor, Lee Sherman Dreyfus, who said, “It is a fundamental tenet of the Republican Party that government ought not intrude in the private lives of individuals where no state purpose is served, and there is nothing more private or intimate than who you live with and who you love.”

Unfortunately, a decade ago, a new crew of far-right Republican politicians who were following a national playbook for stirring up election turnout by social conservatives succeeded in placing an anti-same sex marriage proposal on the same ballot as a constitutional amendment. The proposal was at odds with the constitution’s “Declaration of Rights.” But it passed.

So it was appropriate that a senior jurist with deep roots in Wisconsin, Federal Judge Barbara Crabb, would intervene with a determination that “quite simply, this case is about liberty and equality, the two cornerstones of the rights protected by the United States Constitution.” In an eighty-eight-page decision that was hailed as one of the most thorough yet produced by a federal jurist ruling on the issue, Crabb explained that states cannot trump federal guarantees of equality and equal protection with their own discriminatory amendments.

Governor Walker and Wisconsin Attorney General J.B. Van Hollen are still trying to block marriage equality. But they are clinging to a past that has been rejected by the courts and by the great mass of Wisconsinites.

The future is here. And this future allows people to marry the people they love in the places they love.

In their rush to get to the courthouse Friday afternoon, Shari Roll and Renee Currie forgot to bring cash for the license fee. Roll handed her credit card to friend who ran off to a nearby bank machine and returned with the cash. It was no problem. Shari and Renee were getting married where they live, and their friends and neighbors were helping out.