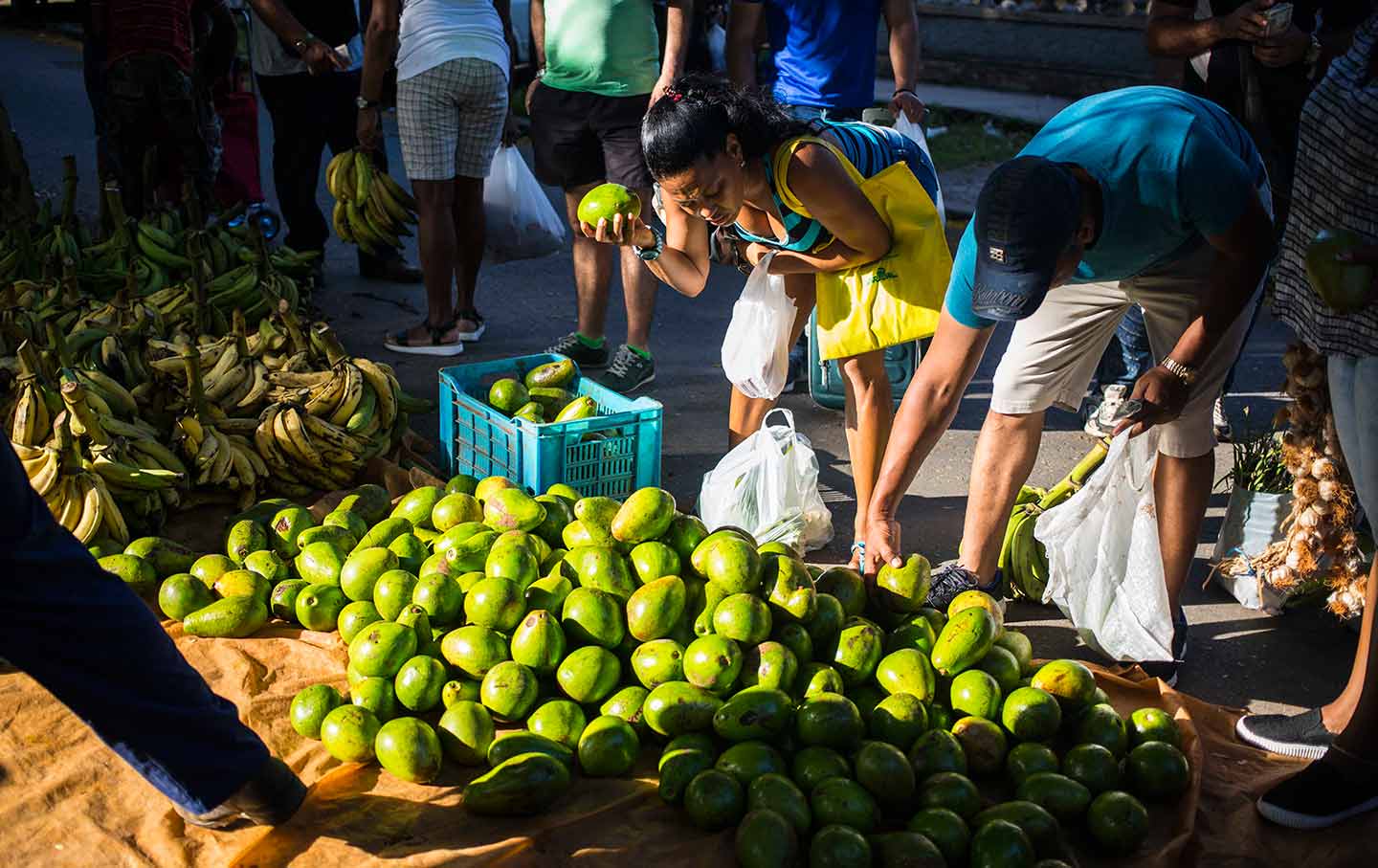 “Our business is down 70 percent,” Havana restaurateur Niuris Higueras told a group of Nation magazine travelers who were spending their final evening of a weeklong spring tour in Cuba at her renowned eatery, El Atelier. “We may have to reduce staff,” she sadly noted, after a major boom in US-generated business following Barack Obama’s history-making rapprochement with Raúl Castro.

Culinary entrepreneurs such as Higueras, along with other Cuban businesses catering to US tourists, have been hit hard by the sharp shift in relations under the Trump administration. In the first quarter of 2018, travel from the United States to Cuba dropped by more than half the numbers from the year before—a reaction to widespread confusion over Trump’s harsh rhetoric, tweaks to travel regulations, and alarmist travel “alerts” issued by the State Department in the wake of health problems suffered by US personnel in Havana. Major tour providers, such as National Geographic, whose groups often frequent better eating establishments such as El Atelier, have been forced to cancel trips.

The Cuba travel industry is scrambling to convince potential travelers that going to Cuba remains perfectly legal and absolutely safe, and to implement colorful marketing strategies to attract US tourists. The State Department’s August 23 decision to soften its travel advisory from “level 3” (reconsider travel) to “level 2” (exercise increased caution), putting Cuba in the same category as popular destinations like France, Germany, Italy, and Denmark should prove useful in the campaign to revive US travel to the island. 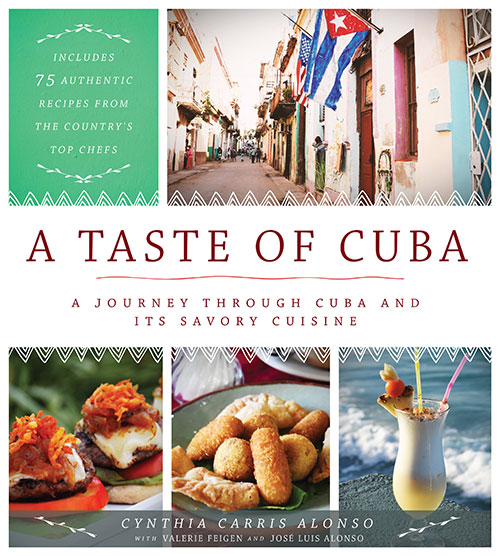 But so too will the publication of an enticing new book, A Taste of Cuba: A Journey Through Cuba and Its Savory Cuisine. Compiled by photographer Cynthia Carris Alonso, A Taste of Cuba is really three books in one: first, a photography book filed with eye-catching images of places, people, and tasty-looking traditional and modern dishes such as malanga fritters, ropa vieja, and sweet guava shells with cream cheese; second, a visual travel guide through Havana’s enchanting neighborhoods, as well as Cuba’s other main cities and provinces which highlights the best culinary stops along the way; and third, a comprehensive recipe book of both well-known and lesser-appreciated Cuban cuisine that includes beverages such as the classic mojito and the famous Hemingway daiquiri.

Carris Alonso, along with her co-authors José Luis Alonso and Valerie Feigen, have tested all 75 of the recipes in this book, translating Cuban cooking traditions and longtime family recipes into doable dishes. They also tried to replicate the inventive techniques that Cuban chefs often use in a country where traditional cooking tools and appliances are scarce, and where creating virtue out of necessity when cooking is an ever-present challenge. It was “our job,” Feigen writes in a chapter titled “The Test Kitchen and the Cuban Pantry,” “to really decode each chef’s process and passion, while recording it clearly and faithfully.”

Number one on my list of memorable meals I have had in Cuba is the lobster-in-pineapple—a popular dish at a number of Havana’s best private restaurants, called paladares. The recipe in A Taste of Cuba, provided by the chef at Los Mercaderes in Old Havana, combines chunks of sautéed lobster tail with pineapple, brown mustard, onion, cream, and rum. Another recipe, from the Finca Agroecologica El Paraíso, in the picturesque province of Pinar del Rio, reveals the ingredients in the finca’s popular “Anti-stress drink”—a blend of coconut milk, pineapple juice, anise, basil, lemongrass, and peppermint—to which a splash of rum can always be added. 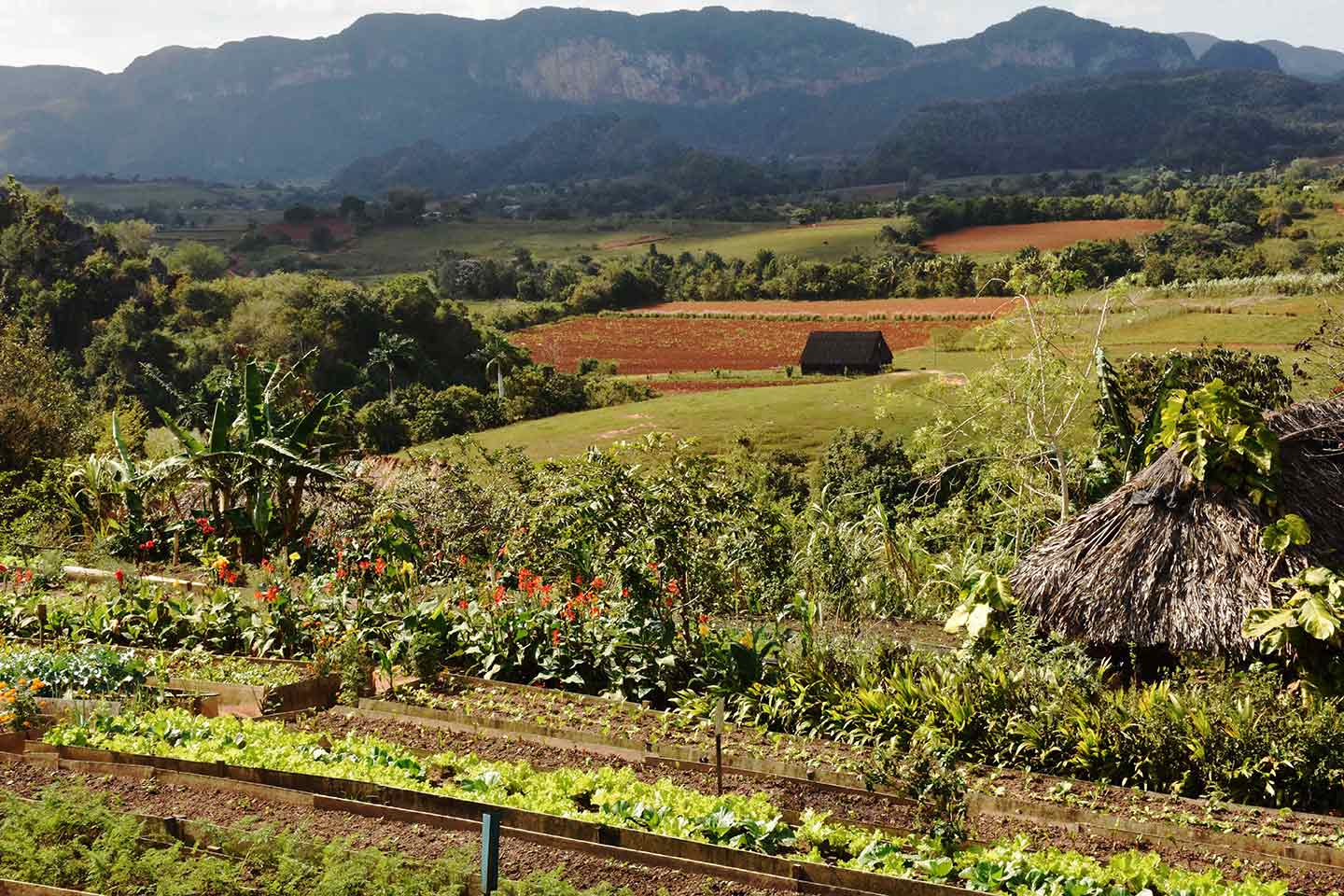 The scenic view from the popular farm-to-table restaurant El Paraíso in Viñales, part of the culinary landscape of Cuba. (Cynthia Carris Alonso)

El Paraíso, as Carris Alonso’s exquisite photos aptly demonstrate, is one of the most beautiful locations in the world to eat a meal; and for dessert it serves the best flan I have ever had in Latin America. With the recipes featured in this book, I can try to recreate the flan, and so many other meals from Cuba, in my own kitchen. “The photographs in this book will take you on a journey through Cuba,” notes the book’s introduction. “The recipes will bring Cuban cooking into your home.”

The late, great Anthony Bourdain journeyed to Cuba twice to get a sense of its people and a taste of its food. “It is said around here, quietly no doubt, that the only three things the revolution actually got right are sports, education, and healthcare, and that the three things it does worst are breakfast, lunch, and dinner,” Bourdain observed during his first trip in 2011. During his second trip, in 2015 for his CNN show Parts Unknown, Bourdain marveled at the culinary evolution of privately owned restaurants. “Last time I was in Havana a meal at a paladar would have been rice and beans. Now…sushi!” he reported, while consuming fresh fish at a rustic bayside cafe. “Looks like we will be eating well,” Bourdain predicted, as he devoured a meal of pig’s-head soup, roast pork, and tamales.

To be sure, Cuba is not acclaimed for its cooking. The island has become a tourist attraction because of its vibrant music scene, vintage American cars, colorful colonial architecture, world-class rum and cigars, ocean vistas, and the allure of an improbable revolution that stood up to the Goliath of the North—and survived. “The food was almost universally forgettable, but this is not why you come to Cuba,” the writer Reif Larsen advised in the New York Times travel section last spring. “You come to be transported. To dance, to twirl your toes in the dust.”

A Taste of Cuba aims to change that perception and add a unique culinary experience in Cuba to the long list of reasons travelers should choose the island as their next destination. The Cuban restaurant industry, the authors readily note, faces numerous obstacles, among them chronic shortages of fresh ingredients and kitchen equipment, and a dearth of service-oriented restaurant workers. “Many of the owners and chefs who contributed to A Taste of Cuba,” Carris Alonso writes, “told me that they spend their days resolviendo problemas, solving problems.” And those problems can be particularly aggravating in a Communist Party–run economic system that is largely unsympathetic to Cuba’s new and growing private sector. Just this summer, government authorities passed yet another wave of regulations to further restrict the ability of Cuban cuentrapropistas—self-employed entrepreneurs—to acquire foodstuffs for their restaurants and fully deploy their talents and energies to expand their businesses.

Cooking with flair, and a splash of rum, at the paladar El Atelier. (Cynthia Carris Alonso)

But it is the “creativity, determination and survival skills” of Cuba’s culinary entrepreneurs, so vividly recorded in this book, that make the eating experience so delicious in Cuba—even if a Michelin-level meal is currently hard to find. The men and women behind the restaurants featured in the book bring vision, energy, and tenacity to their culinary art, as well as to the tables in their restaurants. “If one looks deeper, into the soul of Cuba today,” says Carris Alonso, “one finds a rapidly changing and developing culture of entrepreneurship bubbling with hope, excitement, and opportunity.” Cuban chefs are in the vanguard of this movement. Indeed, it is impossible to appreciate Cuba’s evolving culture, and the broader socioeconomic transition this proud nation is undergoing, without eating at the restaurants and sampling the cuisine featured in this book. 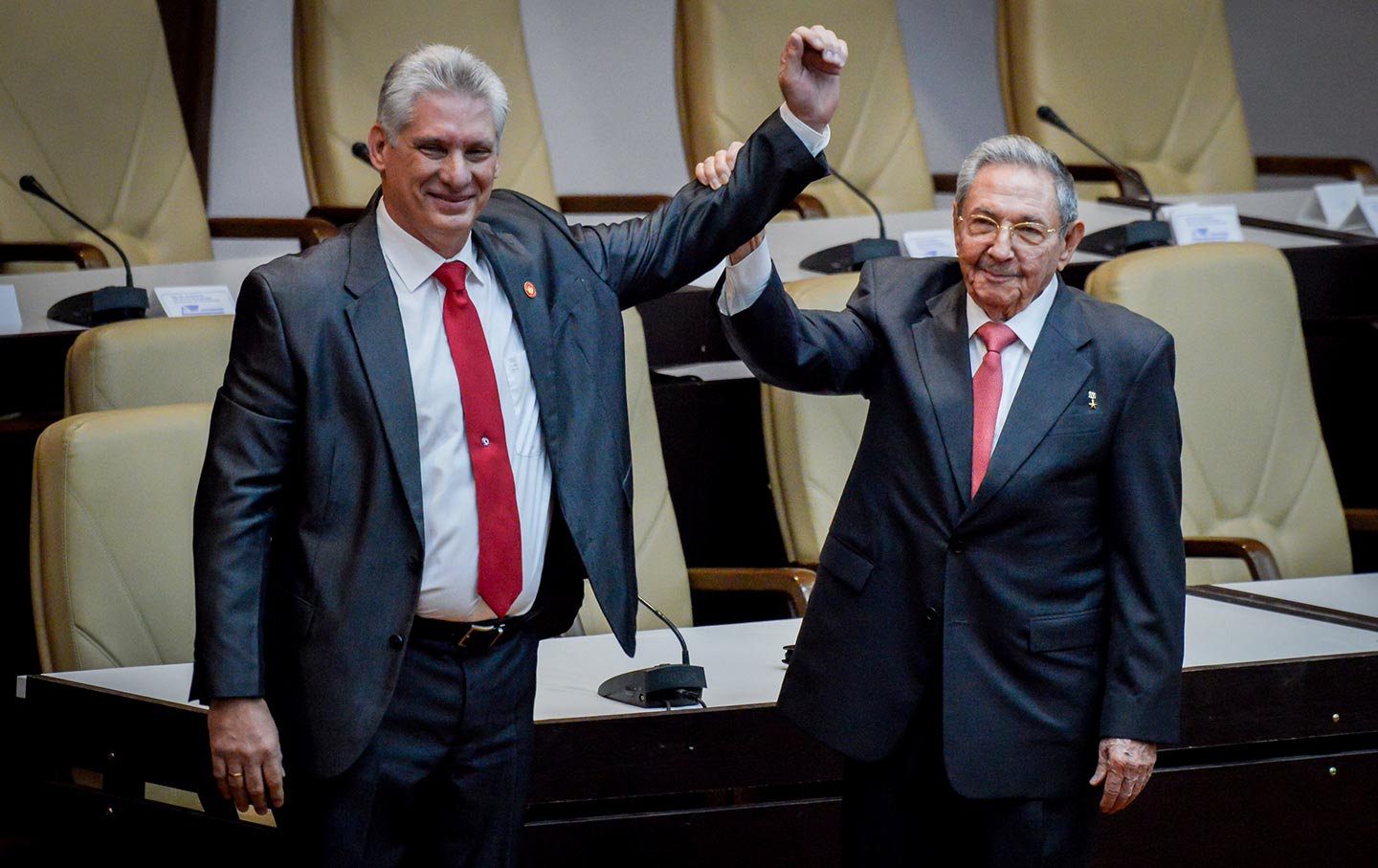 Cubans Face the End of the Castro Era

“My goal with this book is to provide a visual entry into Cuba’s culture, neighborhoods, and food through photographs, history, and recipes from the country’s top chefs,” Carris Alonso concludes, and to share what she calls “the life-affirming character of the Cuban people,” which is “ever more evident in the eating establishments showcased [here].” A Taste of Cuba accomplishes that mission with its inviting presentation of the island’s new and exciting food scene.

Most important, this delectable book reminds us that through the universally shared experience of eating, Cuban cuisine has a leading role to play in bringing our societies together, regardless of the obstacles Trump has created. “Let this be the beginning of closer relations between the people in Cuba with the people abroad,” as the book quotes El Atelier owner and chef Niuris Higueras. Getting A Taste of Cuba is a savory place to start.