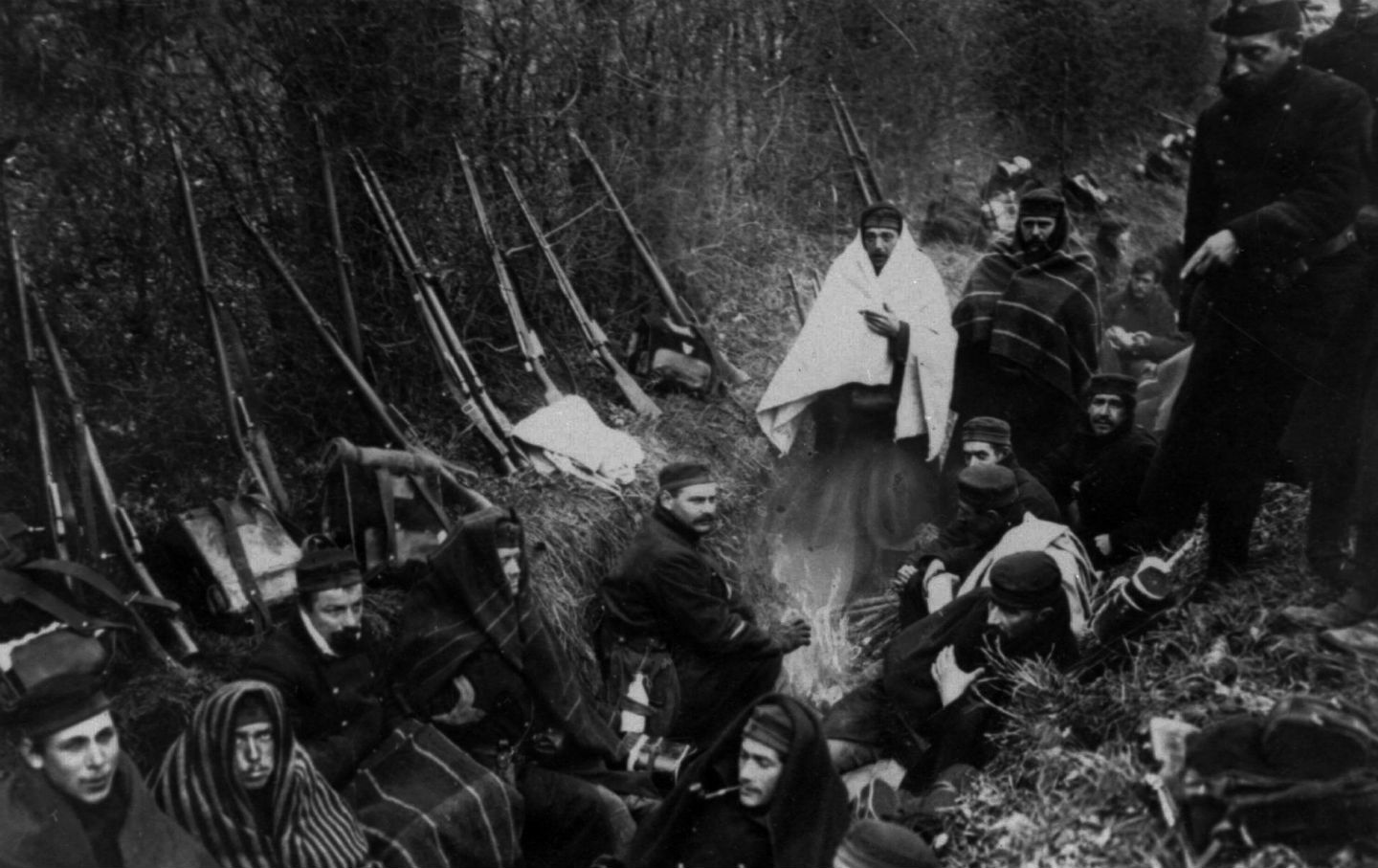 Allied troops huddle in a trench near Ypres, Belgium during World War I. (AP Photo/files)

In early May and early August, we will celebrate the 70th anniversary of VE and VJ Days. Images of jubilant crowds in Times Square, joyous faces wreathed with smiles, banners proclaiming victory, the sailor leaning forward and the nurse bending back for a passionate kiss, will all be exhibited for us to admire. And we will, viewing them, share the celebrants’ joy.

But we should also remember those in Europe for whom the horrors of war did not vanish with the end of organized hostilities: the millions left homeless, stateless, destitute, near starvation; the numberless, often anonymous victims of rape, their bodies the spoils of war, occupation, and revenge; the troops returning to devastated villages, cities of rubble, and families torn apart.

In Germany alone, at war’s end, there were 8 million to 10 million prisoners of war, forced and slave laborers, and death-camp and concentration-camp inmates who, on liberation, took to the roads, the fields, the forests, and the highways in search of the food and shelter they required to survive. Those who were healthy enough to walk, ride, or board transports for home did so as soon as they were able. “Half the nationalities of Europe were on the march,” wrote war correspondent and author Alan Moorehead. “At every bend of the road you came on another group, bundles on their shoulders, trudging along the ditches in order to avoid the passing military traffic.”

It fell, by default, to the Allied armies to protect these people from the elements and from the anarchy descending on Germany. American and British troops gathered them up, marched or loaded them into military vehicles, and transported them to assembly centers and camps, where—the Jewish survivors discovered to their horror—they were to be grouped and housed by nationality, Ukrainians with Ukrainians, Poles with Poles, inmates and torturers side by side. Such inhumane forced gatherings of victim and victimizer would not be remedied until the fall of 1945, and then only after a scathing report by Earl Harrison, dean of the University of Pennsylvania Law School and a special adviser to President Truman, who charged that the Jews in the refugee camps were being treated “as the Nazis treated them except that we do not exterminate them.” Harrison was exaggerating for effect, but not by much. Gen. Dwight Eisenhower, commander of the Allied forces in Europe, took immediate action upon receiving the report to transfer them to separate facilities, increase their food rations, and, over time, remove from leadership positions those who looked upon the Jews as “lower than animals,” as Gen. George Patton put it.

For tens of thousands of Holocaust survivors, liberation would prove to be a dead end, a detour into a maze with no paths leading out of it. The civilized world, forced to take notice, had gazed in horror at the photographs, the newsreels, the eyewitness testimony of the troops and officers who had liberated the death camps. But the horror subsided and, with it, any attempt to bring justice to the suffering. In 1945, there was little effort, in the United States or elsewhere, to open borders, grant visas, enlarge quotas, and let in these victims of war. The Jewish survivors—now labeled “displaced persons” or, more simply, “DPs”—would be shut away in their refugee camps for the next three to five years, imprisoned a second time in a land whose leaders had nearly succeeded in annihilating them.

Nearly a million more non-Jewish Eastern Europeans, many now citizens of lands annexed by the Soviet Union or within its sphere of influence, remained in Germany as well. The Soviets demanded that they all be repatriated, by force if necessary, so that those who had, reluctantly or enthusiastically, served the Third Reich—and there were many among them—could be tried for their crimes. When the Americans and British refused to forcibly remove anyone from the DP camps, the Soviets protested that, in so doing, they were protecting war criminals, fascists, quislings, and collaborators, storing them away until they might be redeployed in a future crusade against the Soviet Union.

The signing of the unconditional surrender on May 8, 1945, did not end the war for the million or so displaced persons warehoused in refugee camps. Nor did it bring peace to the tens of millions of Serbs, Poles, Muslims, Balts, Cossacks, Hungarians, Turks, Bulgarians, Romanians, Ukrainians, and Germans who, in the period after VE Day, were murdered or expelled from their homes and driven across borders in a frantic, lunatic whirlwind of ethnic cleansing; nor to those who suffered as combatants or civilian casualties in the civil wars, large and small, that continued or broke out anew in Greece, Yugoslavia, Poland, Ukraine, and the newly annexed Soviet lands.

For other Europeans—and we count their numbers in the tens of millions also—the fruits of war were desperation, hunger, and homelessness. There was not enough food on the continent, nor would there be for years to come; what food there was could not be transported to those who needed it. Yugoslavia had, in the course of the war years, lost at least one-quarter of its vineyards and half its livestock, and 60 percent of its roads had been destroyed. The Netherlands had lost 60 percent of its road, rail, and canal transport. One-fifth of Polish roads, one-third of Polish rail tracks, and 85 percent of Poland’s rolling stock were useless. A fifth of all German living spaces—3.6 million apartments—were no longer habitable; and some 20 million Germans were left homeless. Conditions were even worse in the Soviet Union, where 70,000 villages, almost 2,000 towns and cities, 32,000 factories, and 40,000 miles of track were ruined; some 25 million people left homeless; and millions more forcibly relocated from their former homes to new ones.

Nearly 40 million European souls perished from war-related causes between 1939 and 1945, more than half of them noncombatants. Six million Jews were killed, almost all of them civilians. Soviet deaths totaled between 25 million and 27 million, the vast majority civilians as well. American war deaths, all military, approached 420,000 in Europe and Asia combined.

A little over three months after VE Day came another celebration, this time of the surrender of Japan after the atomic bombing of Hiroshima and Nagasaki and the instantaneous deaths of at least 100,000 people, with another 100,000 (at a minimum) falling ill and dying of radiation sickness in the months and years to come. The crowds that gathered in Times Square on August 14, 1945, were larger and more raucously unrestrained in their joy than they had been a few months earlier.

In Europe, the United States was compelled to negotiate the terms of the postwar occupations and peace settlements with Britain and the Soviet Union. In Asia, because US atomic weapons had ended the war without need of the military support promised by the Soviets at Yalta and Potsdam, the United States could impose peace terms unilaterally. The ultimate weapon having been detonated, the price paid for Japan’s unconditional surrender was unimaginable. The distrust between the Soviets and their former allies increased exponentially, as did the stakes for humanity should another war come to pass.

Just as the Great War and the flawed peace agreements that followed had laid the foundations for a second world war, so did the destruction, the displacement of millions, the death of millions more, the annihilation of cities and peoples, and the rupture of trust between the Allies after VE and VJ Days sow the seeds of the cold and hot wars that would mark the second half of the 20th century. It is infinitely easier to start wars and fight them than it is to end them. War begets war; the signing of treaties and the celebration of victory do not bring about peace. These are but a few of the historical lessons we appear not to have learned.