“You need a good education to play jazz,” the late saxophonist James Moody once said. “The professor is ‘the road.’”1

Moody, a virtuoso who learned the bebop idiom on the bandstand with Dizzy Gillespie and other pioneers of the music, understood from experience how jazz was taught for most of the last century. Newcomers learned by apprenticeship—playing sets, listening and following cues, imitating, experimenting, and finding their own way, gig by gig, night after night. Though plenty of jazz clubs are still thriving, and while artists of all kinds will always learn from each other, young musicians tend now to learn jazz the way their friends might learn computer science or business—through specialized college programs. More than 70 schools now offer undergraduate and/or graduate degrees in jazz studies, from Berklee to Whitman College. At the State University at Purchase in New York, there’s even a scholarship fund named for James Moody.2

The migration of jazz education from clubs to classrooms in recent decades is essentially parallel to the transformation in the study of filmmaking during the 1960s and ’70s, when film programs at UCLA; USC; California State University, Long Beach; NYU; and other universities produced the first generation of directors who learned in the academy, rather than on the back lots of the Hollywood studios. Martin Scorsese (NYU), Francis Ford Coppola (UCLA), and Steven Spielberg (Cal State, Long Beach) all had the multiple benefits of an understanding of studio-system history, a familiarity with non-American cinema, and a grasp of film theory, and they made new sorts of movies with both technical rigor and a fresh, creative feeling.3

In the music world today, higher-ed programs in jazz are now so pervasive that it’s probably safe to assume that any fairly well-established musician under 40 studied jazz in college. Their professors would not have been just “the road,” but also the likes of Bill Charlap, the pianist who directs the jazz program at William Paterson University in New Jersey; George E. Lewis, the trombonist and electronic composer who teaches in the jazz-studies program at Columbia; or Regina Carter, the violinist who teaches at the Manhattan School of Music in New York. And their music, like the movies of the star graduates of the early film schools, has, at its best, both formal integrity and intellectual expansiveness.4

Recent releases by two jazz-program graduates, Ryan Keberle and Tyshawn Sorey, make potent cases for the value of the educational methods by which any artists so fine could achieve such fineness. If Keberle and Sorey had both studied by correspondence course, I’d sign up my teenage son, a bass player, for mail-order lessons.5 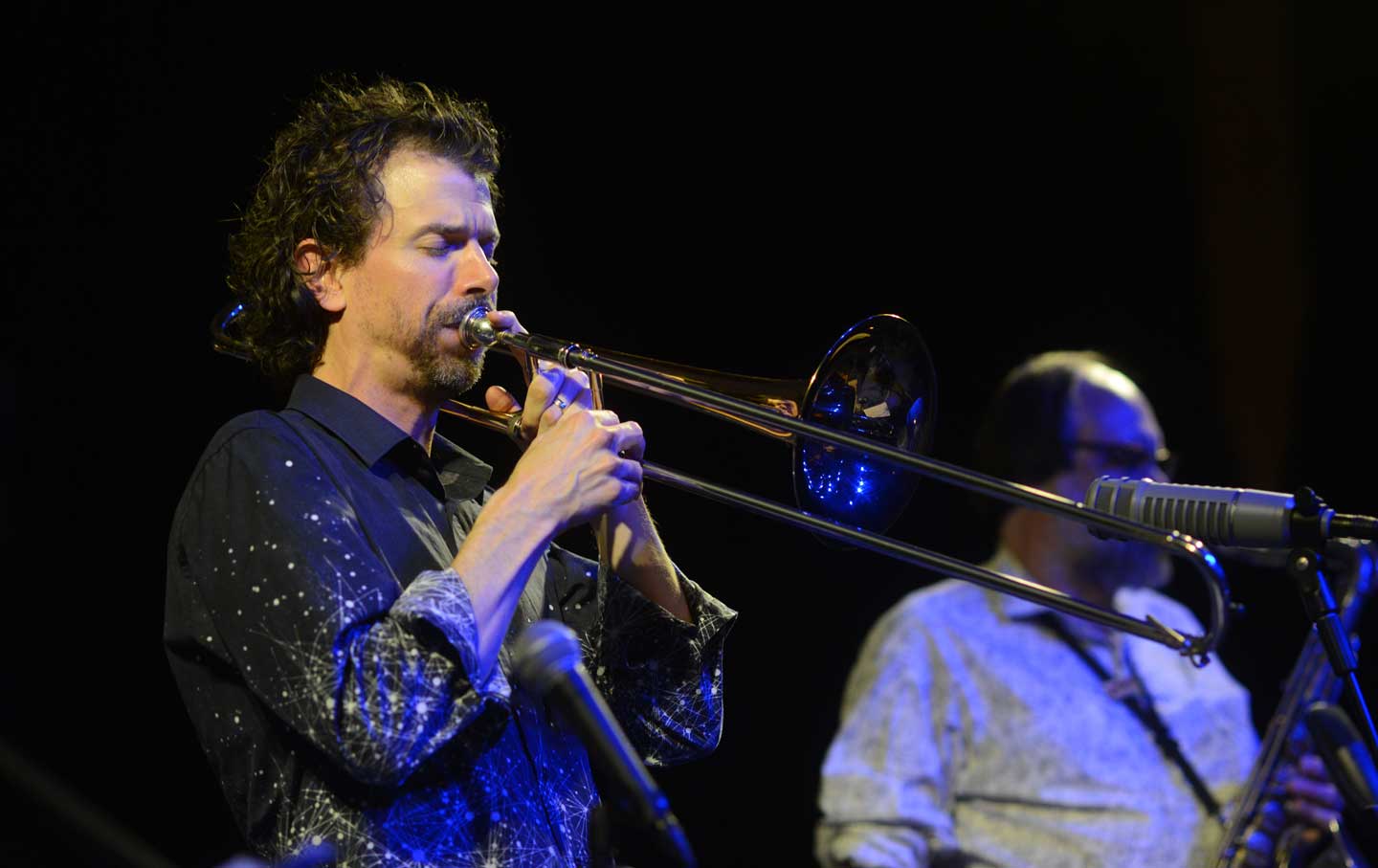 Keberle, a 37-year-old trombonist and composer whose father is the director of jazz studies at Whitworth University in Washington State, studied at both the Manhattan School of Music (with teachers including Steve Turre, the trombonist and seashell player) and Juilliard (under trombonist Wycliffe Gordon). He has made seven albums as a bandleader over the past 10 years (two with the band Double Quartet and five with his working group, Ryan Keberle & Catharsis), in addition to playing trombone on notable recordings by David Bowie and the bandleaders Maria Schneider and Darcy James Argue. His new release with Catharsis, Find the Common, Shine a Light, is a jazz quintet album with Latin strains and elements of pop and chamber music—a work by someone who understands multiple musical traditions and feels beholden to none in particular.6

Thematically, Find the Common, Shine a Light is a statement of dissent, clearly pointed at the contemporary political crisis. The nine selections include Bob Dylan’s vintage protest anthem, “The Times They Are A-Changin’,” sung with plaintive yearning by Camila Meza, who also plays superb guitar on the album. The instrumental tracks—among them “Strength,” “Empathy,” and “Mindfulness”—assert their values abstractly, sometimes with wordless vocals by Meza. The album is unpretentiously intelligent and profoundly moving.7

Tyshawn Sorey, a graduate of the William Paterson University jazz program, went on to get graduate degrees in composition from Wesleyan and Columbia, under the guidance of George E. Lewis. Since 2007, he has released six albums under his own name, while also playing percussion with such esteemed avant-gardists as Anthony Braxton, Roscoe Mitchell, and John Zorn. He makes a music of ideas, occupying a terrain where formal composition and improvisation, craft and impulse, conjoin. It’s the kind of work doctoral committees love. It’s theoretical and challenging, but rewards careful listening.8

Sorey’s latest album, Verisimilitude, uses the instrumentation of a classic jazz trio—piano (Cory Smythe), bass (Chris Tordini), and drums (Sorey)—and it sounds nothing like a classic jazz-trio album. Sorey interjects obbligato phrases with his drums, instead of laying down patterns for the tonal instruments to play above. The piano playing is spare and dry, and the bass work is, for the most part, complementary, rather than supportive. There’s no way to know precisely how this music was created—how much was composed in formal notation, how much was invented spontaneously. It’s music that demands to be heard, and is well worth hearing, for its high quality, not for its category.9

The jazz-ed generation may now have its own Spielberg and Scorsese.10